What happened this week in the Digital Assets market
Week-over-Week Price Changes (as of Sunday, 2/07/21) Source: TradingView, CNBC, Bloomberg, Messari
“Wen Bottom?” There are already potential signs.
Investor sentiment is really, really, really bad right now. Bond investors are already having their worst year in 30 years, resulting in massive outflows from bond funds, and investor sentiment in the equity market is the lowest it has been in the last five years. Retail investors are flip-flopping and pressing negative bets. According to the American Association of Individual Investors (AAII), the difference between the number of individual investors who are bullish and the number who are bearish is -30%. For context, in the past 35 years, the only times AAII sentiment got more bearish and the S&P 500 failed to rally was during the 1990 and 2008 recessions. Meanwhile, interest rate markets are daring central banks to blink at this point, as they are basically pricing in a recession caused by the Fed over-tightening – rates markets are now fully pricing in 5 Fed rate hikes by year-end and a 40% chance of a 6th, but are also already pricing rate cuts by 2024. And of course, digital asset investor sentiment is near all-time lows, with negative funding rates and record stablecoin balances on exchanges. The declines YTD in digital assets are rather tame relative to the carnage in equity markets and bond markets (at least on a risk-adjusted basis and certainly relative to expected return potential), but the large negative absolute returns are still inflicting severe pain.

Naturally, many digital asset investors are asking, “Wen bottom?” This is, of course, impossible to answer, but you can look for signs that narratives are shifting the other way even when consensus is all in one direction. For example, everything that could go wrong for DeFi and Layer 1 protocols did go wrong last week, yet all of the applications survived the 3rd biggest stress test we've had in the last 2 years (the others occurred in May 2021 and March 2020). Some additional potential confidence boosters include:
Resiliency leads to confidence. And right on cue, you may have noticed digital asset prices largely rose last week. When negative news stops leading to negative price action…
Shorting no longer works -> shorts have to start covering -> lack of offers since most spot selling already occurred -> prices go higher -> FOMO from those sitting in cash waiting for lower prices that never materialized
We’ve been here before, and each time it’s happened, it caught investors off guard. The July 2021 bottom happened when everyone over-emphasized "doomsday" scenarios that never materialized, then FTX announced a monster raise from TradFi investors and OpenSea announced a massive raise from a16z, which gave investors confidence. In March 2020, the bottom was sparked by the Fed and helicopter money, but many were still selling the bottom, in disbelief that prices wouldn’t go lower. It led to one of the most hated rallies on record, which was ultimately catapulted further by the announcement of new entrants (like Paul Tudor Jones). The December 2018 bottom was started by an "Ethereum rallying cry," when leaders like Joe Lubin, Vitalik Buterin, Mike Novogratz, and others essentially said "enough is enough" and called the ETH $80 bottom. These events inspired confidence, and while difficult to see in the moment, were clear turning points for markets.
Is it possible that a January 2022 bottom is forming right now with an “everything that could go wrong has gone wrong, but prices just aren’t reacting anymore" setup? This past week could be one data point we look back on if this is the beginning of the end of the selloff. Regardless of when this ends, it will end. As we wrote a few weeks ago, no one's long-term thesis on digital assets has changed due to recent events. The short-term thesis is in question, but market forces can change quickly.
Correlations and Narratives
Right now, market participants are focused entirely on central banks and the resulting interest rate rises that will affect earnings, credit conditions and other macro factors. Surprisingly, we are collectively following a handful of economists’ estimates, even though they have a long history of being completely, flat out wrong. 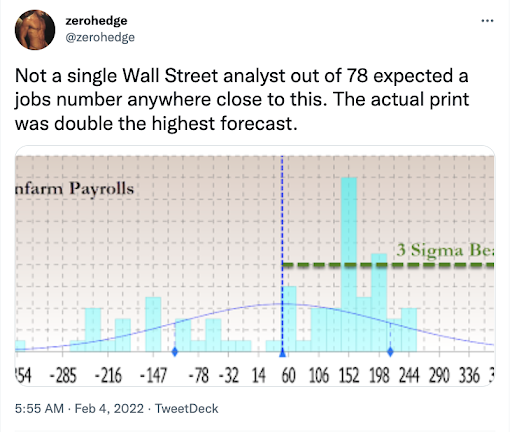 The irony, of course, is that most digital asset investors believe tokens provide the greatest access to capital, the most aligned stakeholders, and the fastest customer bootstrapping, thereby representing the future of democracy, wealth equality, technological advancement, and an escape from the untrustworthy global elites that have plagued us with high debt and inflation. Yet here we are, placing our trust in the jawboning of a handful of geriatric Fed and ECB officials.
So yeah, correlations between digital assets, equities, the VIX, and interest rates have risen recently, but zooming out, that's also why this asset class has historically been so uncorrelated (because near term correlations are always changing). There are simply no significant, long-term statistical relationships between digital assets and other asset classes. In years past, we’ve written about rising digital asset correlations to the Yuan, gold, equities, oil, money supply, and even avocados. Each time a new high correlation occurs, we forget and dismiss the old one. I believe we’ll look back on this current market environment in a similar fashion.
So why are correlations rising today? Because in the past year-and-a-half, we’ve had new entrants to the digital assets market from the macro hedge fund world, yet there have been little to no new entrants from traditional long/short equity funds, credits funds, or other value investors. It’s the players, not the assets, that are correlated. As the investor base continues to evolve and disperse, so will the driving narratives and correlations. Instead of focusing on inflation and rates, we’ll be focusing on “earnings.” The equity market just showcased massive price dispersion based on earnings, and one day, digital asset investors will reward or punish token issuers similarly.
Was Solana “Too Big to Fail”?
Last week, a hacker infiltrated a bridge between Ethereum and Solana called “Wormhole,” and stole 120,000 ether worth about $325 million. According to the “Rekt” leaderboard, this was the 2nd largest hack on record—many other instances came from other DeFi bridge hacks. In short, the bridge allowed users to transfer ETH from the Ethereum blockchain onto the Solana blockchain in return for “wrapped ETH” tokens that are compatible with Solana, but backed 1:1 by ETH on the Ethereum blockchain— essentially, an IOU that you can redeem when you no longer need the wrapped ETH on Solana. The IOUs became worthless when the hackers stole the ETH that was backing these wrapped tokens. This hack could have devolved further, as FTX (a known Solana backer) was still offering full 1:1 conversions of wrapped ETH for ETH, potentially on the hook for hundreds of millions of dollars of losses.
However, almost immediately, Jump Trading—another Solana and Wormhole backer—fully replenished the missing ETH. Jump Trading owns Certus One, the developer behind Wormhole, so it was incentivized to keep it running. The Solana (SOL) token barely moved down (relatively) on the hack news and then jumped immediately following the bailout, despite yet another misstep in a series of Solana problems over the past several months. It poses the question: are digital assets becoming “too big to fail?”
The term “too big to fail” stemmed from the 2008 financial crisis, when the market deemed certain institutions too big and too interconnected for the government to allow them to fail. While it wasn’t an explicit government backstop, it was implicit enough to give investors confidence in otherwise insolvent institutions. Today, Solana has a $37 billion market cap. The major investors in Solana include Jump Trading, FTX, Multicoin Capital, and many other large institutions that have a lot riding on Solana’s success. Similarly, the market cap of public, liquid digital assets is only $2 trillion, but the equity market caps (combined public and private) and cash positions of some of the largest institutions in the space is probably not too far off from this number (Binance, FTX, Coinbase, and other exchanges alone have equity market caps that are estimated to be ¼ of the size of all of the tokens they trade). Quite frankly, there is a LOT of money on the line that is highly incentivized to ensure that these blockchains and applications don’t fail.
In just a few short years, we’ve already seen Bitmex bail out Bitcoin by voluntarily shutting of its liquidation engine (March 2020); we’ve seen investors bail out MakerDao after a large liquidation hole; investors bailed out Bitfinex after it lost access to a majority of its capital; and who knows how many times BlockFi has been bailed out. By the way, I’m pro-bailout—it almost always works for both the investors and the companies/projects being bailed out (see Merrill Lynch, Jefferies, Knight Capital and now Peloton).
While the “Fed put” has been a buyer of last resort for debt and equity markets for over a decade, it’s comforting to know that the digital asset community seems to be providing their own put for investors.
What We’re Reading This Week
Crypto Credit Card Usage Reaches $2.5 Billion in Q1: Visa
India to Tax Crypto Income, Launch Central Bank Digital Currency
The Super Bowl is Now Being Called 'Crypto Bowl' as Upstart Finance Firms Spend Millions on T.V. Ads
In Huge Precedent, IRS Says It Will Not Tax Unsold, Staked Crypto
Hacker Steals $320 Million From Solana, Ethereum Bridge Wormhole