Written by Jeff Dorman, CFA
Apr 6, 2020
What happened this week in the Crypto markets?

Fear is palpable right now, and you can see and feel the negative sentiment building every day.  The Fear & Greed Index, which aims to gauge investor sentiment, continues to hover near record lows (extreme fear) in both traditional markets and crypto markets, and many market participants seem to be expecting global markets to go lower every day.  After all, we just saw the largest weekly jobless claims numbers in history (it was literally off the chart) and global commerce is at a complete standstill.

Specific to crypto, frequent readers of “That’s Our Two Satoshis” know that the digital asset space is complex and much deeper than just Bitcoin.  But for the past few weeks, all eyes have been on BTC, while the rest of the market has taken a back seat, following suit in near lock-step.  Similar to equity and debt markets, the shorts are trying, and failing miserably.  We highlighted this table last week, but every weekend the shorts become emboldened in an effort to take advantage of lower liquidity, only to find deep bids that carry over into the work week (whatever that means in a work from home society).

So Why Aren’t Markets Lower?  It’s All About the Benjamins.

Currently, there aren’t many (if any) investors on the planet who know what the value of their assets are worth. Oil just tanked 66% last quarter because of a manipulated cartel price war, and then rallied back 25% almost entirely because of a tweet.  Equity, MBS and corporate debt investors are essentially guessing with regard to when the pandemic will end, and when/if anyone will ever go back to work and resume spending.  And as we wrote a few weeks ago, digital assets may be the only investable asset on the planet right now that is not actually affected by supply and demand shocks, yet the ultimate value of these assets remains uncertain.
So why aren’t asset prices going down every day?  Contrary to what many want to believe, the stimulus is working.  Cash is ubiquitous.
Let’s start with monetary and fiscal stimulus; the speed and magnitude of which has been greater than at any point in history.  While the jury is still out on whether these moves can actually cure a broken economy, it is without a doubt having the desired effect on global markets.  The repo market is functioning again, as is the commercial paper market.  Corporate credit markets have thawed, as the investment grade bond index (LQD) is now nearly back to pre-oil crash levels after a 15% rise from the lows, despite back-to-back weeks of over $100 billion in new issues.  Carnival Cruise Lines (CCL), a poster child for excessive stock buybacks and 100% reliance on consumer disposable income, saw an insane $17 billion in demand for $3 billion of secured notes (upsized to $4 billion and priced 100 basis points tighter than price talk).  Meanwhile, even though Bitcoin should undoubtedly benefit from the devaluation of fiat purchasing power in the long-run, in the short term, it is trading more like a risk-asset.  But it is hard to push prices lower when there is over $1.8 billion of “cash” (via stabletoken Tether) sitting on exchanges, ready to be redeployed back into Bitcoin and other digital assets.  When an investor sells a stock or bond and sits in cash, it may be unclear where the cash proceeds will ultimately be reinvested, but there is literally nowhere else for this Tether to be invested other than back into digital assets.  Sellers are selling right into the largest bid this asset class has ever experienced.

Global markets are simply awash with cash.  The only question is when investors will choose to deploy this cash, and to what asset classes and securities. Prices can of course still go lower, as investors wait patiently and valuations continue to go down.  But this is not a solvency crisis yet.  For now, there is plenty of money to be deployed towards good companies and projects.
There is a clear correlation between stimulus and price. 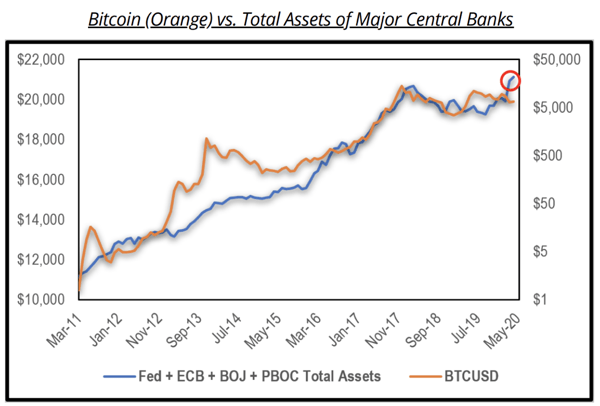 As incredible amounts of money have been lost or gained in the past month, it can be make or break times for financial service companies.  Robinhood may have completely erased a $7 billion valuation in a matter of days due to outages on their site and angry customers, who are undoubtedly about to unleash a massive series of lawsuits.  In crypto, customers are fleeing the once dominant futures exchange BitMEX after a majority of their clients were liquidated during the 50% BTC price decline on March 12th.
On the other hand, some exchanges in crypto are putting the customer first, and making changes to ensure they keep their clients happy (and liquid).  Following BitMEX’s issues, Singapore-based Huobi is considering adding circuit breakers to help mitigate rapid price changes.  Meanwhile, Binance has delisted all of their popular leveraged tokens (similar to leveraged ETFs) because their customers were having difficulty understanding how these complex products work, which led to confusing losses.
While the digital assets space often takes a different path than the broken incumbent financial system, there are times when copying its “customer first” playbook makes complete sense.  We applaud those in this new space who are trying to do what is best for their clients.
Notable Movers and Shakers
The digital assets market is a path function - meaning that the prices of individual digital assets are very much dependent on the transition of the market from point A to point B. In low volatility markets, alternative digital assets are able to generate alpha as conditions are more desirable for idiosyncratic plays; however, in high volatility markets, most events don’t matter, as most assets trade with a 1.0 beta to Bitcoin. We saw this last week, with Bitcoin Dominance unchanged even after a 13% weekly rally, as all other digital assets moved higher in lock-step. Nonetheless, there were a few assets that had potential long-term impact events that are worth mentioning:
What We’re Reading this Week
Corporate Socialism: The Government is Bailing Out Investors & Managers Not You
This article explores the issues with the latest stimulus and bailout focused on the travel industry - specifically airlines and airline makers. Similar to the bailouts of 2008/9, everyday people are left scratching their heads as to why corporations are being bailed out at the expense of average Americans. The bailouts of airlines in this case however need to benefit the general public, as airlines can be considered a utility, not line the pockets of shareholders and employees. Instead these businesses need to use their additional cash to create a buffer for situations such as these, not enriching shareholders through buybacks.
France Issues Call for Digital Currency Experiments
Last week, France’s central bank issued a call for applications for central bank digital currency (CBDC) experiments. The request is designed to assist Banque de France in understanding the various applications of digital currencies and their associated risks and advantages. France is the highest profile eurozone member to publicly push for the adoption of a CBDC, with the Banque de France having hinted at its interest in furthering payments through Fintech solutions for the past four years.
Dow Jones is Using Blockchain for Compliance
Dow Jones Risk & Compliance, a branch of Dow Jones focused on providing sanctions data in partnership with EastNests, has created a blockchain-based watchlist for real-time compliance monitoring. The product allows institutions to access Dow Jones’ sanctions data while the blockchain offers security from outside tampering and manipulation. In addition, the product reduces the risks associated with manual entries while increasing the delivery speed, yet another way blockchain is revolutionizing Wall Street’s back office.
BMW Group Uses Blockchain to Drive Supply Chain Transparency
In a press release last week, the BMW group discussed its use of blockchain to track the supply chain of parts and raw materials used in its vehicles. The project, dubbed PartChain, is designed to combine all the complex and disparate parts of the automobile supply chain, which in the past has been managed by a number of different counterparties and organizations. PartChain was initially piloted in 2019 at two BMW plants and three suppliers and is now being rolled out to ten suppliers.