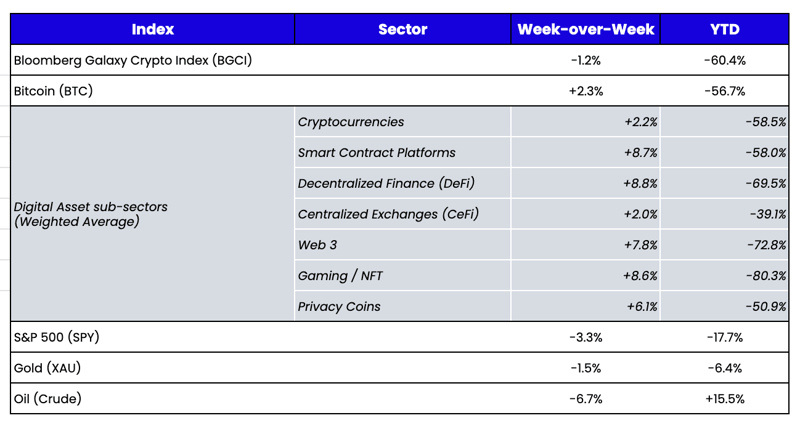 Source: TradingView, CNBC, Bloomberg, Messari
ETH Is the Best Way to Get “Long Blockchain”
Stocks and commodities sank last week as the Jackson Hole selloff continued, but digital assets convincingly outperformed. U.S. equities have lost 8% in the past 2 weeks while Ethereum (ETH) is only down around 2% over the same period. So while we’re a bit lonely over here on “digital assets have decoupled from macro” island, last week was more evidence that this may, in fact, be true.
Some may have noticed that I used ETH as the benchmark and not Bitcoin (BTC). Why? Well, the ETH/BTC ratio is up roughly 4x since the 2020 Bitcoin halving, and there’s a very simple explanation for this:
ETH is the most pure play, generic way to express a “growth of blockchain” theme, while BTC is now just a boring, highly correlated macro trade. 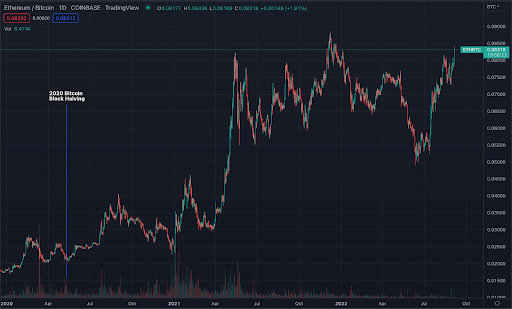 Source: TradingView
Before diving in, let’s digress a bit. When we first launched Arca over four years ago, we offered various investment vehicles with which investors could gain different exposures to the growth of blockchain technology. At that time, almost all investors equated blockchain with Bitcoin. They didn’t care what we were invested in as long as it gave them “Bitcoin-like exposure.” It wasn’t that they believed Bitcoin was representative of all things blockchain—it was just that Bitcoin was the only digital asset that most had heard of. Bitcoin was mainstream, while the existing and future blockchain applications were not.
Fast forward four years, and almost none of our investors or prospects still think Bitcoin represents the future of blockchain. Bitcoin may or may not still be a great investment and asset to own, but it is no longer representative of any segment of blockchain other than “global currencies.” Meanwhile, there is now a clear leader in the clubhouse for a single, pure-play way to gain exposure to everything happening in blockchain: Ethereum (ETH). Ethereum has a commanding lead over every other ecosystem when it comes to the growth of smart contracts, DeFi, Web3, NFTs, stablecoins, and gaming. Following the EIP-1559 proposal and the impending ETH 2.0 merge, the ETH token becomes a low inflation (perhaps even deflationary), high value-capture way of expressing this view.
Let’s dive in and consider ETH from the varying vantage points:
Security: ETH sports a nearly $200 billion market cap, which is nearly 5x that of its largest competitor, Binance Smart Chain (BNB), and roughly ⅔ of the entire Layer 1 smart contract protocol space. That’s a big lead.

DeFi: Ethereum captures almost 60% of all total value locked (TVL), which is an indication of usage and deposits into various decentralized banking, lending, trading, and insurance applications.
Source: DefiLlama
Stablecoins: Of the roughly $150 billion of U.S.-dollar denominated stablecoins outstanding, 79% are issued on Ethereum mainnet. 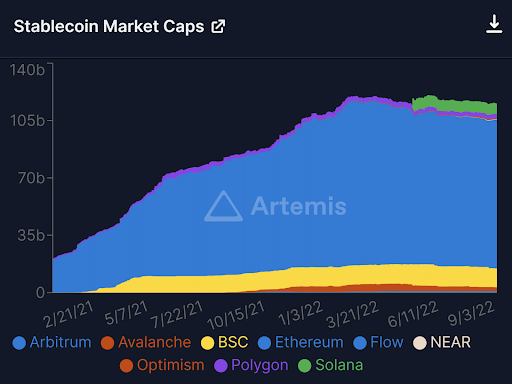 Source: GokuStats by Artemis
Gaming: Binance currently supports the largest number of games, but Ethereum is very close when including Layer 2s within the ecosystem (e.g., Polygon and ImmutableX) and has many of the highest quality games in development. 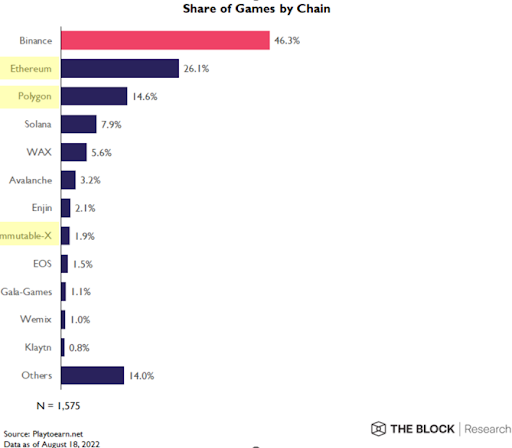 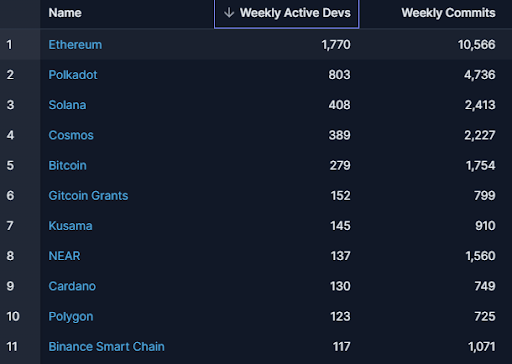 Source: GokuStats by Artemis
While digital assets can be polarizing, tribal, and political, the reality is most investors don’t have strong philosophical opinions on how blockchain technology should succeed. They just want to make money if it does.
For now, ETH is undeniably the most simple, and perhaps best way to confidently say “I’m long blockchain.”
The Power of Layer 1 Blockchains
Here’s a fun one for anyone trying to determine how to value digital asset tokens. Last week, the two biggest movers in digital assets were directly related to the age-old question, “What is a Layer 1 blockchain worth?” While Ethereum still reigns supreme and captures a ~$200 billion market cap, there are at least 20 other competitors vying for the throne—almost all of which capture $1 billion+ market caps and collectively make up roughly ⅓ of the total market cap of Layer 1 smart contract protocols. Recall that we’ve written extensively about this topic, comparing the tokens of Layer 1 protocols to currencies within a nation-state. Accordingly, being the native currency of a growing nation is a significant component of the value proposition—find the fastest growing nation, and you’ve found a great investment. The market assigns a high premium to the “option value” that any of these contenders could one day house significant economic activity, just like Ethereum currently does.
Last week, we saw two divergent paths.
On the negative side, Helium (HNT), a decentralized wireless internet network originally built on its own blockchain, proposed moving to Solana. Naturally, the HNT token underperformed all other tokens, falling -30% week-over-week. As Galaxy pointed out in their newsletter, “The largest impact (potential drawback) was that the migration to Solana would remove the need for staked validators. ~38% of HNT is currently staked and the 6.85% of rewards that currently go to the staking group would be re-allocated to hotspots.” While integrating with Solana could potentially have other positive benefits, such as accessibility and utility across the blockchain, in the near term, it most certainly reduces the “home-run scenario” that many investors hope for when investing in new or uncertain Layer 1 blockchain tokens. The Layer 1 premium was erased.
On the positive side, the Luna blockchain (LUNC) relaunched last week, leading to a 95% gain in the token price. The total quantity of LUNC staked has gone up from .004% to 7% of total LUNC supply in just over a week.
While Terra Luna is most famous for the growth of its UST stablecoin and subsequent epic collapse, the quick out-of-court restructuring of the distressed blockchain enabled it to have a second life much quicker than what we’d typically associate with a bankruptcy process. While any future use cases of the Luna blockchain are very uncertain—including whether or not UST (now USTC) will ever become a preeminent algorithmic stablecoin again—the fact that the blockchain is still producing blocks and requires validators immediately gives it that high premium optionality that speculators and “spray and pray” VCs love so much. In addition, the jump in price brings LUNC back in line with its peer group of Layer 1 blockchains, trading up almost 3x since the relaunch began to the “floor price” of $1 billion+ market caps for smart contract protocols. Last week, we discussed that the LUNC resurrection is one of many events currently driving price moves independent of the macro environment, and the 95% week-over-week gain reflects the premium that is granted to other Layer 1 blockchains—even those with a “stink” on them like Luna or those left for dead (many on the list below). 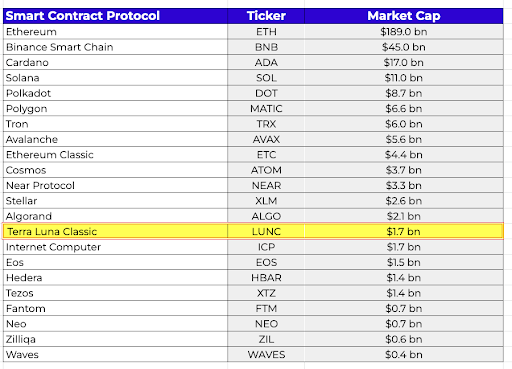