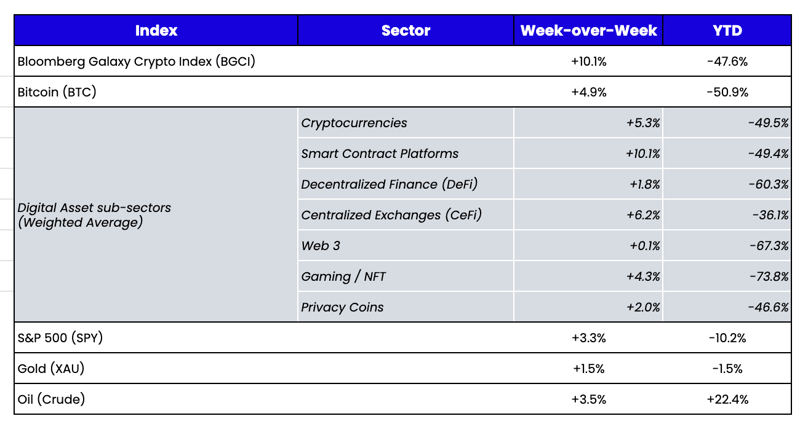 Source: TradingView, CNBC, Bloomberg, Messari
Digital Assets Have Already Decoupled From Macro
All eyes were on the July CPI print last week, which came in much lower than expected, thus sparking yet another rally across equities, credit, and digital assets. Equities have now bounced 20% off the lows, while digital assets have gained 30-100%+ from the lows—all while positioning remains light and sentiment stands at historic lows. Suffice to say, this continues to be a rather hated rally. With risk assets rising in unison, the chatter regarding high correlations and lack of identity for digital assets grows louder. While the data agree slightly on the surface, we’re not so sure this is true.
Digital assets likely decoupled from macro/equities 2 months ago, but no one realized it because 3 very idiosyncratic events occurred simultaneously, leading to “correlation, not causation.”
From November 2021 to May 2022, it was an all-one trade for risk assets. Inflation anticipation was higher than expected, the FOMC responded late but aggressively, and every asset class moved together (rates, equities, commodities, the U.S. dollar, digital assets). But beginning in mid-May, the decoupling started, caused by three distinct events in May and June, which marked a turning point in the relationships between digital assets and equities:
Let’s start with the LUNA/UST collapse, which occurred between May 10-13. Most market participants didn't realize that equities and digital assets decoupled because we were all expecting digital assets to decouple up, not down. But this was a very “crypto-specific” event that generated an idiosyncratic response unique to digital assets. Using ETH as a proxy, you can see the breakdown versus the Nasdaq in early May. This relationship broke down even further in early June when we began to see the defaults arise at a host of centralized lenders.

Source: TradingView
Meanwhile, equities/rates were still trading on inflation fears until mid-June and happened to experience their own narrative shift as the digital asset deleveraging ended. So while equities and digital assets bottomed and began 2-month rallies in mid-June, they occurred for very different reasons. Digital assets rallied because the forced selling stopped, and the bankruptcies were announced, taking a massive overhang out of the market (from forced, unknown selling pressure to a supervised court process). Equities/bonds rallied simultaneously, but this bounce was due to a change in the "peak inflation” narrative; inflation died in mid-June as gas prices receded, and the market switched from fear of inflation to fear of a recession. 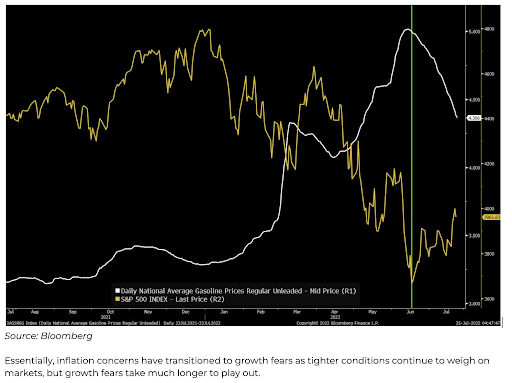 Finally, while digital assets and equities bottomed in mid-June, the rally didn’t really take off until mid-July—once again for different reasons. Equities rallied because earnings were less “disastrous” than expected, and the economic data worsened, sparking a “bad news is good news” market response. This continued when Fed Chairman Powell stated that the Fed would be “data dependent,” taking away the preordained hawkish undertone and giving the market dovish hopes that the data would be bad enough to force a Fed pivot. Meanwhile, digital assets were submerged in their own news bubble. On an Ethereum Core Developer call on 7/21/2022, it was announced that the Goerli testnet merge (the final testnet before the mainnet ETH 2.0 merge) would happen between August 8-10, which was the first definitive timeline regarding the most significant event in digital assets since the Bitcoin halving two years ago. ETH began its ascent immediately following this new defined timeline, and a host of other digital assets began to trade based on their own news flow rather than on overall market factors.
Now, the coincidental timing of idiosyncratic digital asset events (LUNA/UST, defaults/bankruptcies, ETH 2.0 merge) and macro events (peak inflation, commodities rolling over, bad econ data leading to “bad news = good news”) makes it difficult to prove the decoupling. Worse, Bitcoin is still highly correlated with equities, and way too many investors/journalists/pundits still equate all digital assets with Bitcoin. For them, this market still looks correlated to equities. But Bitcoin is stuck/correlated for its own very unique reasons. BTC still has massive collateral overhangs with lenders/miners and has completely lost its narrative—it is not an inflation hedge, it is not uncorrelated, and it does not act defensively (in fact, BTC underperforms both upside and downside since 2020). As a result, with no narrative of its own, BTC has traded as "Nasdaq beta" and will continue to until it regains a new narrative. 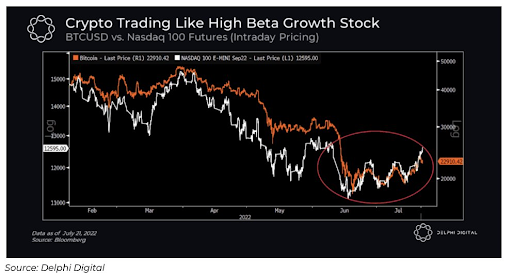 But if you look elsewhere in digital assets, there has been massive dispersion in digital asset prices since mid-June. And all of the market leaders that released big news/partnerships/tokenomics changes ultimately rallied the most (UNI, DYDX, LDO, ETH, CRV, AAVE, MATIC, CHZ, etc.) This is a very encouraging sign that digital assets are once again trading on their own information flows rather than being 100% tied to macro events.

Source: TradingView
There were, of course, some parallels; investors across all asset classes are heavily underinvested/short and therefore hate this rally with a passion. But digital assets are back in their own world, and there aren't enough quality tokens to buy relative to the cash/stables/short positions that need to be put to work. So while prices of digital assets and equities are still trending in a similar direction, it is very likely that the macro trade is over, allowing investors to put the macroeconomic playbook away and refocus on tokens that will gain due to blockchain adoption. 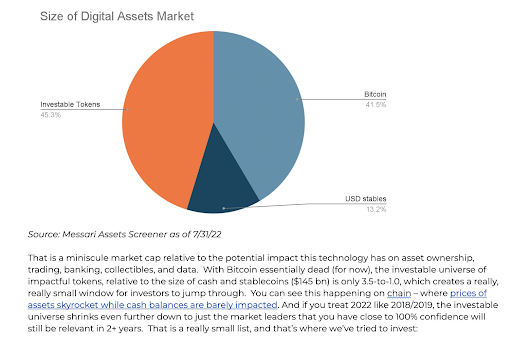 Source: Arca internal calculations based on Messari market cap data as of 7/31/2022
A DeFi Application Sanctioned by OFAC—A Slippery Slope
We rarely get involved in political theater and seldom write about events within digital assets when we don’t have a strong, informed view, but last week’s news that the U.S. Treasury Department sanctioned Tornado Cash (an Ethereum-based service that mixes digital assets to hide the source of funds) seems important enough to mention so readers can draw their conclusions.
The U.S. Treasury deemed that any holdings that are majority owned (50% or more) by Tornado Cash are now blocked and must be reported to the Office of Foreign Assets Control (OFAC). OFAC added 38 Ethereum smart contract addresses to the Specially Designated Nationals and Blocked Persons (SDN) List, making it illegal for any U.S. persons to interact with them. While OFAC has sanctioned digital asset addresses or companies operating in the digital asset ecosystem on at least 13 prior occasions, this was the first time that OFAC sanctioned contracts associated with a decentralized application. Further, authorities in Amsterdam arrested an alleged Tornado Cash developer, setting a scary precedent that if you write code and it is used for illegal activities, you could be held liable.
Essentially, OFAC is punishing the computer code instead of the bad actors themselves. The action is akin to shutting down email because you got phishing emails instead of trying to punish those responsible for the crime.

On the one hand, Tornado Cash is definitely used for illegal activities. Chainalysis estimates that just over 17% of the ETH deposits it has received in the past four years come from sanctioned addresses and another 10% are from illegal activities. That’s a lot and certainly the type of transactions that need to be cleaned up for this space to mature and grow. 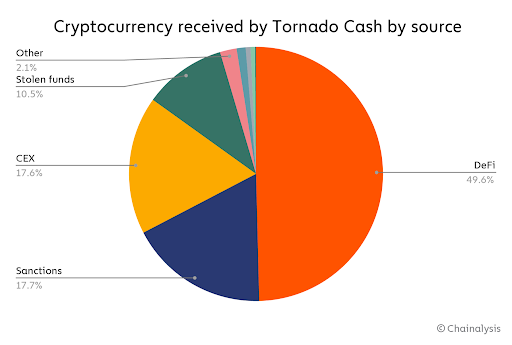 On the other hand, almost 3/4 of transactions using Tornado Cash are completely legitimate. Tornado Cash is open-source code, meaning it’s not owned by anyone and is freely available to everyone. It is, therefore, a public good. Sanctioning all addresses that have interacted with Tornado Cash blindly accuses the innocent and causes major problems for exchanges and DeFi applications that must make tough decisions about how to move forward. Touch a tainted wallet or smart contract and essentially risk going to jail. Further, you could purposefully taint anyone you want simply by sending them ETH that came from Tornado Cash (which is happening to create havoc).
Most everyday digital asset users probably didn’t use Tornado Cash, and will be minimally impacted, but there are plenty of legitimate reasons why some did.
And That’s Our Two Satoshis!
Thanks for reading everyone!
Questions or comments, just let us know.
The Arca Portfolio Management Team
Jeff Dorman, CFA - Chief Investment Officer
Katie Talati - Director of Research
Hassan Bassiri, CFA - Portfolio Manager
Sasha Fleyshman - Portfolio Manager
Alex Woodard - Research Analyst
Nick Hotz, CFA - Research Analyst
Bodhi Pinker- Research Analyst
Wes Hansen - Director of Trading & Operations
Kyle Doane - Trader
David Nage - Principal, Venture Investing
Michael Dershewitz - Principal, Venture Investing
Michal Benedykcinski - Research Analyst
Andrew Masotti - Trading Operations
Topher Macpherson - Trading Operations