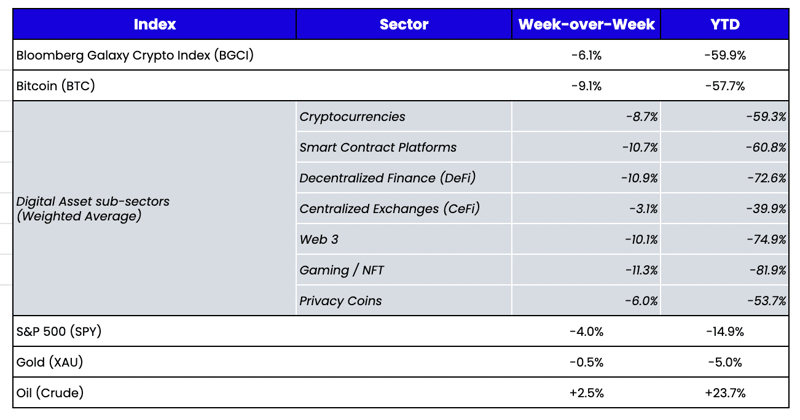 Source: TradingView, CNBC, Bloomberg, Messari
Macro is Back
For the past two months, we’ve pointed out the bifurcation in digital assets and how token price moves have been driven by market leaders and idiosyncratic factors rather than macro. We even went as far as to say that digital assets have already decoupled from macro. Then, last week, we were reminded that central banks may no longer be in the driver’s seat, but they can still grab the wheel whenever they feel like it.
Fed Chairman Powell decided not to mince words last week at Jackson Hole and delivered a short, hawkish speech to remind markets not to get too complacent. The Fed isn’t pausing, and global markets got the message. Stocks, bonds, the dollar, and digital assets all responded in unison to the hawkish message. The Fed governors continue to talk nonstop about rate hikes and beating inflation as if it’s not in their control instead of just ripping the bandage off and jacking them higher all at once. This is the Fed’s game of chicken. They know rate hikes don’t actually do anything to combat supply-side inflation. They know their transparent guidance is already priced in by the market anyway. And since the most considerable risk is that consumers fear inflation so much that they actually make it worse by front-loading purchases, their main job is to jawbone about how they are “tackling it” just long enough until natural deflationary forces bring it down (which is already happening).
So here we are once again, forced to battle the short-term trader’s reaction to hawkish rhetoric versus the long-term investing game of “where else are you going to invest?” The pace of rate hikes is clearly slowing, even as rates go up. With real rates still negative, investors essentially have to own stocks, real estate, and digital assets eventually to beat long-term inflation. At times like this, we’re reminded how little advantage there is to try to time these moves. As Peter Lynch said, “Far more money has been lost by investors preparing for corrections than has been lost in the corrections themselves.” If you’d invested $1,000 in the Nasdaq in 1971, that investment would have grown to $130,000 today (blue line). But if you took that same investment and missed the index’s 20 best-performing days (gray line), you’d have only $26,000 to your name. What’s even more interesting is that most of the Nasdaq’s best-performing days happened during major bear markets, not bull markets.
So if you choose to ride out the volatility, the question becomes where to look within digital assets to find opportunities to participate in the inevitable recoveries. 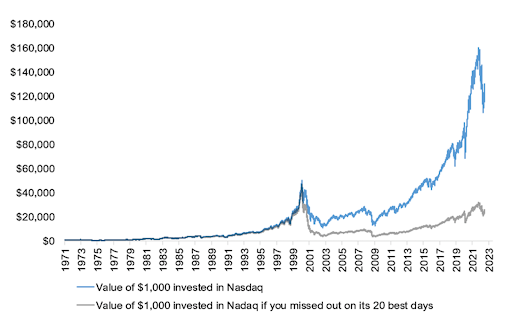 Source: Finimize
Beneath the Broad Market Moves Are a Lot of  Interesting Potential Investment Ideas
“It’s all one trade” is a common refrain this year. While this may be true day-to-day or week-to-week, the return dispersion over longer time horizons continues to favor “token pickers.” That said, this dispersion can’t happen until the overall health of digital assets returns. Since most companies, projects, and businesses in digital assets today are at the infrastructure layer, user growth, transaction growth, and trading volumes have to improve before any digital asset company can truly succeed.

We estimate that there are roughly 350 million digital asset users/owners. That number roughly matches how many internet users there were in 2000. Applying the same +19% CAGR of internet users from 2000 to 2010 would imply a digital asset market cap of roughly $7 trillion in 2032 (from $1 trillion today).

Source: Arca estimates using data from here and here
There are many ways to monitor digital asset user, transaction, and volume growth, but anywhere you look paints the same story: growth has slowed over the past twelve months. Until it returns, most fundamental valuations will look expensive. On the flip side, many digital asset businesses have very high operating leverage to user growth, meaning a small positive change in user activity will lead to large gains in token prices.

Source: The Block
While these three factors are the most important to monitor for overall health and strength, that doesn’t mean there won’t be any winners in today’s market. For example, in the debt and equity investment arena, bear markets lead to creative financing and investment structures. Similarly, we’re beginning to see digital asset companies, projects, and DAOs get creative as their token prices plummet and fundamentals fall. In the last few months alone, we’ve seen a few interesting developments, restructurings, liquidations, and reboots—all of which have implications for token prices. These include, but are not limited to: 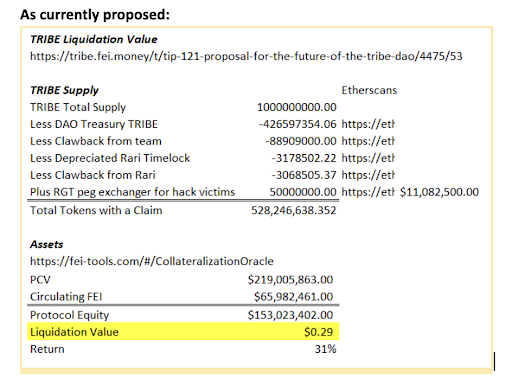