What Happened This Week in the Digital Assets Markets?
Week-over-Week Price Changes (as of Sunday, 5/30/22) 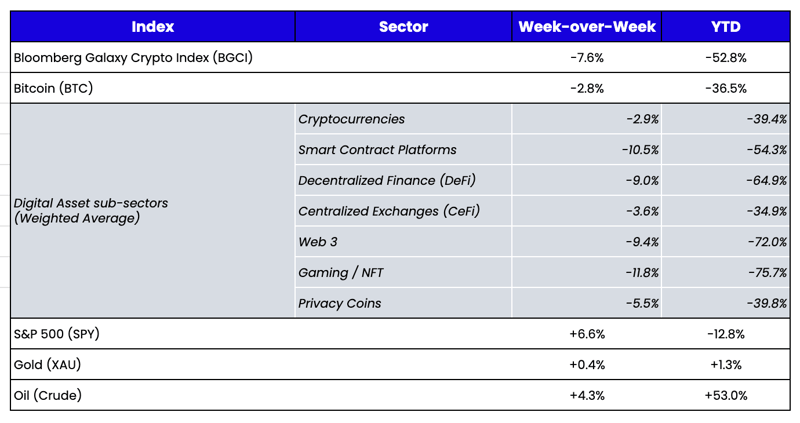 Source: TradingView, CNBC, Bloomberg, Messari
The Decoupling – But Not in a Good Way
Digital asset prices finally decoupled from equities, but not how most market participants had hoped. Digital assets failed to participate in the risk-on rally that sent the S&P 500 +6.6% (now positive MTD), oil +4%, Treasuries higher, and the dollar lower. The stark underperformance is most likely due to spillovers from the carnage caused by the Terra Luna collapse. Those ripple effects are still gripping the industry: lending has tightened, retail investors are hesitant, and funds are heavy cash. We’ve been on record that the recent high correlation to equities would likely not persist, as digital assets are still uncorrelated over longer-time horizons. Further, the very nature of the constantly changing short-term correlations is, by definition, what an uncorrelated asset looks like. Nevertheless, digital assets have now broadly declined for eight weeks in a row, and metrics are finally starting to decline due to apathy from the negative price action. As we begin to see an unthawing process in macro (inflation expectations declining, dollar declining, rates declining, and the Fed’s hawkish tone seemingly more cautious) which seems to be lifting equity spirits, it remains to be seen if digital assets will still trade like one giant “risk-off” asset, or if we’ll begin to see some differentiation again amongst sectors and tokens.
Source: Twitter (Chart 1 and Chart 2)
Netflix and Peloton Should Issue a Token Today
While most of the world focuses on today’s blockchain use cases (cryptocurrency and smart contract platforms), the apps that live on these blockchains will ultimately be far more impactful than the blockchains themselves. Most of these apps exist, but have yet to adopt a digital asset as part of their fundraising and customer bootstrapping, retention, and incentive programs.
For years we’ve foreshadowed a world that we think is inevitable—one where every company, municipality, university, and organization issues its own token. But like many new technologies and ideas, few want to introduce change to the status quo during times of prosperity. It’s only amidst struggles do we look to alternatives. Today, tech companies are struggling. They are struggling with earnings, with employee and customer retention, and with moat. For example, Netflix (NFLX) stock is down -71% from its all-time highs and Peloton (PTON) stock is down over -90% from its all-time highs. The companies face steep competition and have customer retention concerns. Issuing a token could address both.
Let’s first consider Netflix: most of us use the service, and most of us have a price in mind that we’re willing to pay for it. As long as the subscription price increases do not exceed what we’re willing to pay, we will continue to contract the service. Unfortunately, most of Netflix’s users do not care about Netflix itself; they simply care about the content and the ease of use—not the platform they use to access it. As a result, few Netflix customers feel brand loyalty and are unlikely to lock in future services by paying upfront in a meaningful way. Moreover, Netflix has over 220 million subscribers, but 80% of their shareholders are institutions. While it is difficult to measure exactly what that ownership/customer Venn diagram looks like, it’s clear that most of their customers are not meaningful shareholders. Whether or not Netflix succeeds as a business is not relevant to most Netflix customers, as there is no stakeholder alignment. 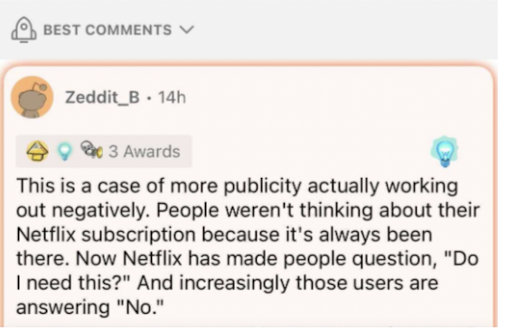 But a Netflix token, outlined in the example below, could solve many of Netflix’s issues. Netflix could issue a token with a fixed supply that cannot be altered. Of the 100% of tokens issued, the distribution could look as follows:
The token would have hybrid properties, much like Binance Coin (BNB), which includes both a financial component predicated on the success of the business (BNB uses 20% of profits to buyback and burn tokens), as well as a utility function that acts as a member benefit reward (BNB token holders get fee reductions, can use tokens as collateral for derivative trading, and get first dibs on new token launches). For Netflix, it could look as follows:
By instituting these simple changes, Netflix can lock in revenue upfront from the sale of the tokens (booked as revenue for future services) and retain a valuable asset on its balance sheet in the form of unissued tokens. As a result, Netflix customers would become more loyal, sticky customers. Further, NFLX shareholders would give up a just small portion of earnings that they would make back in spades due to growing the overall pie of customers and profits. The demand for the NFLX token would be driven by expectations for future subscription price hikes (front-load purchases), by the dividends distributed to token holders (a simple DCF model could calculate the token’s worth), and by the demand for perks (intangibles that are harder to quantify). While NFLX stock currently has an $86 billion market cap, a NFLX token would likely have a market cap that matches or surpasses that of its share price due to unlocking the intangible value of Netflix’s business that can’t be captured solely by profits.
Peloton (along with every other customer-facing business) could, of course, do something very similar:
The beauty of these customer-facing tokens is that they can morph as the company evolves. Unlike equity ownership, which only gives you the residual value of the business or potentially a cash dividend, token ownership can tap into all kinds of unique perks to retain and incentivize its members.
Once a few pioneer companies and investment banks start to tap into these additional sources of revenue and customer retention tools, every company will do it—from Disney to Starbucks to your local mom-and-pop store or restaurant. As token issuance grows, so will the ability to trade and monetize these tokens. While equity ownership and token ownership can certainly co-exist, you may even see some companies convert 100% of shareholders into token holders, thereby eliminating the shares of the business and turning token holders into actual equity owners. In some ways, token ownership redefines what “equity ownership” truly means.
We’ve already seen some companies flirt with these ideas: Starbucks has announced plans to issue NFTs, Bakkt has built a marketplace to trade airline miles and other reward points, and some companies have toyed with the idea of tokenizing their equity (rather than creating new hybrid tokens). Of course, all of these ideas can co-exist, subject to U.S. regulators providing a roadmap that allows companies to experiment with big ideas without the fear of breaking rules that don’t actually exist.
In the meantime, I hope some tech executive reads this and realizes that there is a solution besides watching its customers leave and their stock price bleed out.
Comparing LUNA and UST to Equity / Debt Recoveries in a Chapter 11 bankruptcy
Last week, Terra Luna executed one of the fastest “bankruptcy restructurings” in history. Just weeks after an epic collapse which wiped out nearly $20 bn of UST depositors’ money and $40 bn of LUNA token holder value, Terra Luna 2.0 (LUNA) was released. The new LUNA token distribution is as follows: