Bitcoin May Be The Perfect Corporate Treasury Asset

Written by Jeff Dorman, CFA
Dec 7, 2020
What happened this week in the Digital Assets markets?
Week-over-Week Price Changes (as of Sunday, 12/06/20)
Source: TradingView, CNBC, Bloomberg
It was a fairly listless week across all asset classes, including digital assets.  Despite a notable slowdown in hiring courtesy of the November jobs report, and a large uptick in Covid cases, equity markets continued their unabated march towards new all-time highs.  Thank goodness we're back to a "bad news is good news" market, as it was quite scary for 3 weeks in March when over 10 years of moral hazard momentarily left the equity markets.
Digital assets, meanwhile, have settled into a subdued trading range. Bitcoin continues to garner the bulk of the headlines, causing quite a stir on Wall Street as both the sell-side and buy-side compete to publish stale and largely uninformed opinions.  But for those who have already passed “Bitcoin 101”, there is quite a bit happening beyond Bitcoin that will likely comprise next year’s headlines.
Bitcoin May Be The Perfect Corporate Treasury Asset, For Now
Let’s get Bitcoin out of the way first, and assume anyone reading this has already come to the conclusion that at a minimum, Bitcoin isn’t going away anytime soon.  Independent of price and investing, does it make sense to hold Bitcoin as a cash substitute?  Several companies, most prominently Square (SQ) and Microstrategy (MSTR), seem to think so, which has stirred a debate on whether Bitcoin is a viable treasury-management asset for companies looking to protect the purchasing value of their cash.

Back in August, just a week after MicroStrategy first announced its Bitcoin purchases, we wrote the following:

“… aside from the investment potential of Bitcoin, it is worth pointing out another advantage of this strategy that was largely ignored by the media’s coverage. Lost in all of the discussions about investment gains is the utility of Bitcoin (and other digital assets).  Owning cash on the balance sheet is actually quite onerous. Corporations with high cash balances and international operations are required to keep multiple global checking accounts, all of which operate with different banking hours. When sending this cash, these banks usually charge companies expensive wire fees, which also tend to have delayed settlement (not to mention weekends being a complete dead end). Plus, corporate Treasurers must try to earn a yield on their float, which often means parking this cash in various money markets or other yield bearing instruments. Whereas owning just Bitcoin on a company’s balance sheet can reduce their reliance on third parties, lower transaction costs, potentially increase yield, and increase payment flexibility. The stock market may not be rewarding companies for pursuing this angle yet, but we expect this to be a nice byproduct of a corporate finance department entering the digital world.”

Fast forward four months, and the newfound celebrity CEO of MicroStrategy made his own veiled reference to the inefficiencies of the traditional, legacy infrastructure. 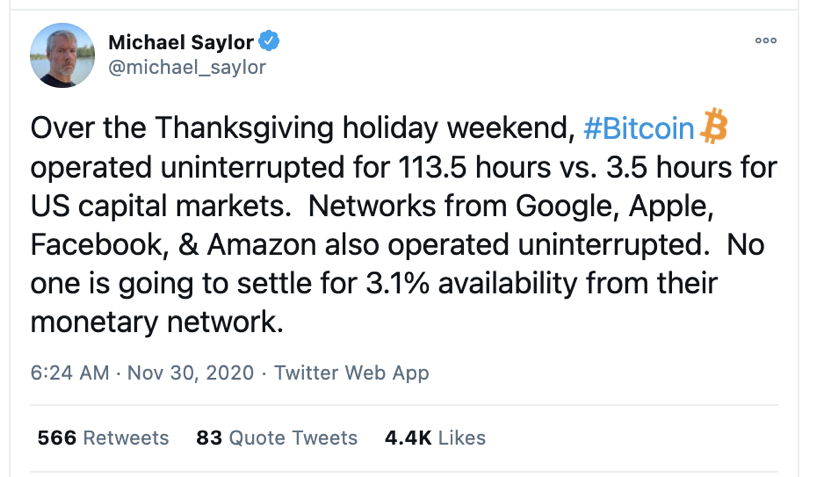 And as Noelle Acheson from Coindesk astutely pointed out, the current market infrastructure is a relic from a time when most trades were settled manually and people had to rest, but now, markets are global, settlement is electronic, and there's always someone awake who wants to transact.
So this brings about an interesting paradox.  Why does a company have cash in the first place?  If they just want the flexibility and fungibility, clearly there are better options now than holding cash in banks or brokerages that are closed more than half of the time.  Further, if they plan to spend that cash, but everything that they might spend the cash on is going up in price due to inflation (stocks, capex, salaries), they’d presumably need to generate an ROI on that cash to keep pace.  But then again, if they expect everything to go higher, why not just buy back their stock before it too goes higher.   Of course, if they buy back stock, that money would then be gone when they might need it most (ahem, March 2020).
Our friend Adam Pokornicky of DAIM posed an interesting question over the weekend after a WSJ article surfaced discussing the largest ever corporate cash coffer in history.

Thanks for asking Adam.  Any company with a huge cash war chest is inefficiently using that capital, and is certainly primed for activism. That said, March 2020 taught us that maybe keeping a large “rainy day” fund is warranted instead of buying back stock and waiting for government bailouts.  Right now, perhaps purchasing Bitcoin really is the best solution to this conundrum -- Bitcoin increases transaction flexibility, keeps pace with inflation, keeps activist investors at bay, and provides a cushion should there be a during the next crisis.  Granted, Bitcoin won’t help solve for USD-based volatility, yet all digital assets solve for better flexibility, so there may be other, more appropriate tokens for treasury management purposes in the future depending on the goals of the company.  Regardless, what was once deemed crazy all of a sudden seems rather rationale (and in fact the opposite is starting to sound crazy).
Next Step - Companies Creating Their Own Tokens
Once companies start purchasing Bitcoin, it’s only a matter of time before they start issuing their own tokens too.  Digital assets issued by companies are proving to be the greatest capital formation and customer bootstrapping tool ever created.  And we’re closer than you may think to this reality:
This is exactly the problem that digital assets can address for companies.  Now, as both AirBNB and Supergreat may have figured out, you don’t technically need a blockchain to make this work.  But, in the case of Supergreat, these supercoins are stuck within the Supergreat ecosystem whereas if they were digital assets, they would be fungible with other assets outside the ecosystem. This would then make them more valuable, more discoverable, and would lead to further growth.  Loyalty points work.  Liquid digital asset “pass-thru” tokens which function as both loyalty points and quasi-equity work better.
Who is next besides corporations?  University endowments are already investing in Bitcoin, so perhaps the first University token is close to coming to market too.  This could be bought by parents of young children for future educational credits, in lieu of using a proxy (like a 529 plan) to bridge the gap between today’s dollars and future post-secondary educational costs.  If the student chooses not to go to that school, but the school is still in high demand, the tokens could be traded on the open market.  Both companies and endowments are prime candidates to give investors direct exposure to their future liabilities rather than being forced to invest in areas they don’t understand or care about as a proxy.  Let us remind you what a Merrill Lynch financial advisor told Arca back in April:

“I think this may be how people think about “saving” for the future.  Because in reality, all we do as financial advisors is bridge the gap between assets/cash flow now, to future liabilities (house and retirement needs), by investing in equity and fixed income which in theory should go up over a specific time period. But what if we knew the exact cost now for the future liability?  If Health Care could be paid for up front in the form of a digital asset, or vacations, or housing expenses?  This could change the formula.”

Yes, digital assets are changing the formula.
What’s Driving Token Prices?
After a strong November kickstarted the market across the board, the beginning of December has offered the space a moment of time to regather and reallocate. The Thanksgiving selloff was tepid, the dip was bought, and now the market is ‘tense’ - waiting for either a push through all time highs or a rejection with a significant retrace. In the meantime, there was a lot of movement in Decentralized Finance this week, with two “blue chip” projects leading the way:

Previous Story
← The Institutions are Coming!
Next Story
Airbnb and DoorDash Show Why Digital Assets Need to Matter →

Sushiswap puts the S and G in ESG