Written by Jeff Dorman, CFA
Aug 17, 2020
What happened this week in the Digital Assets markets?
Week-over-Week Price Changes (as of Sunday, 8/16/20)
Source: TradingView, CNBC, Bloomberg
Societal Value Favored Over Shareholder Value; Bitcoin Favored Over Cash
Since introducing the concept of the four types of digital assets, we have spent a disproportionate amount of time educating investors on the three least well known categories (protocols/platforms, asset-backed tokens, and pass-thru securities). We don’t intentionally gloss over “Money/Cryptocurrencies”, but we spend much less time on it simply because it’s the least interesting bucket from an investing standpoint (Bitcoin plus a handful of what we consider to be inferior competitors). However, corporate finance departments around the globe are about to make cryptocurrencies much more interesting in the coming months and following years.
Before we dive into Bitcoin, let’s review one of Arca’s mid-year predictions:

Less than 2 months later, we’re beginning to see several examples of increasing societal value, though we were wrong about this hurting shareholder value. RBC recently found that 40% of S&P 500 companies discussed diversity, equality and inclusion during second quarter earnings calls, up from 4% in the first quarter, and 6% during the same quarter a year ago. That is a very large and encouraging jump. Perhaps more encouraging, shareholders are rewarding the companies that are doing the right thing. According to Bloomberg:

“Companies that responded to the pandemic by hiring staff rather than shedding workers saw an average 18% increase in their share price relative to their peers in the first six months of the year; those that offered financial help to employees did about 5% better. And the stock prices of companies that closed stores and laid off people trailed those of their peers by 10% or more.”

Doing the right thing has never felt so good. And corporate finance departments are always paying attention to what their competitors are doing, and what drives their stock prices higher. With that in mind, a small business intelligence company, Microstrategy, announced last week that it purchased 21,454 Bitcoin as part of its capital allocation strategy (~$250 million). The purchase was done in an effort to “maximize long-term value for shareholders”, and the CEO went on to explain the investment thesis:

“This investment reflects our belief that Bitcoin, as the world’s most widely-adopted crypto, is a dependable store of value and an attractive investment asset with more long-term appreciation potential than holding cash.”

MSTR stock jumped 20% following the announcement last week, most likely leading to long weekends for junior employees at corporate finance departments around the world as they furiously research Bitcoin. Remember back in 2017 when companies would go out of their way to mention “blockchain” on earnings calls even with no knowledge or intention of how to actually use blockchain, simply because the market was rewarding companies for being ahead of the technology curve? Get ready for Bitcoin redux. 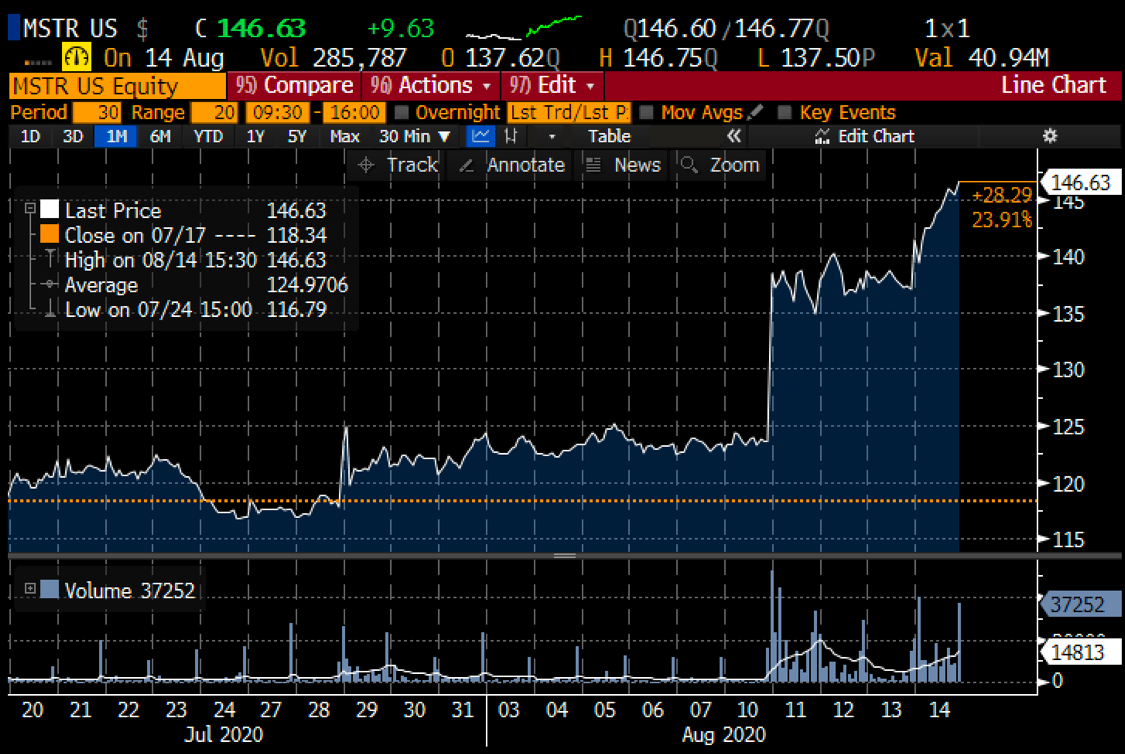 Source: Bloomberg
In a twist of fantastic irony, just as some corporate Treasurers turn to Bitcoin to protect against inflation, the US Treasury department is now begging people to use the analog coins that they have made worthless due to inflation. Poetry.