Sigh... We’re Writing About the Fed 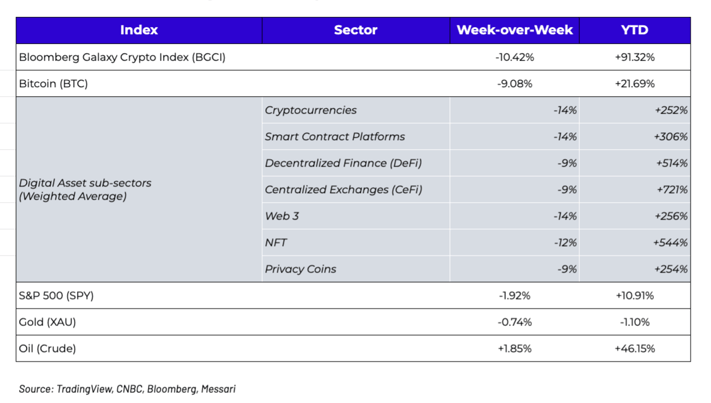 The Fed and Digital Assets
This was one of the most uneventful weeks of the year for digital assets  Looking back on the news flow and the price action, there was very little worth discussing, which is a bit odd given this past week was also “FOMC week” and digital assets fell ~10%.  Many market participants called this the most important FOMC meeting and press conferences of the past decade, though from a purely objective perspective, it was a rather neutral outcome.  Powell continued to speak to the transitory nature of inflation, and inflation targets across the committee barely changed. But this is the era of signaling, and Powell’s shift to “The Fed would begin talking about tapering” from “The Fed will talk about talking about tapering”  was enough to change the market’s outlook even though it is like that nothing material happens until 2023. And as Deutsche Bank pointed out, “it has been nearly impossible to predict inflation even in a period where it has been low and stable. The below chart shows the Fed’s projections over the last decade relative to what actually happened. Clearly they have generally over estimated inflation (as have most people).  This shows how volatile rate expectations could become if the data changes. These are not automatic “carry and forget” times.” 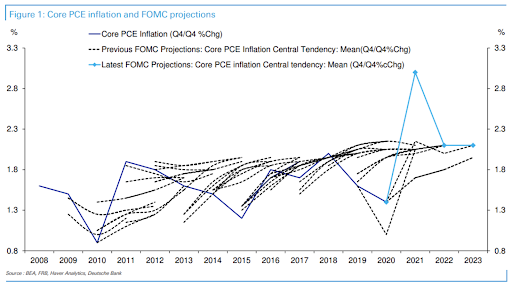 Source: Deutsche Bank
That said, the slightly more hawkish stance roiled public markets.  After three consecutive weeks of gains, US stocks reversed course and had their worst week since January.  The VIX climbed +32%, and the Treasury curve flattened by 11 bps.   The US Dollar rose +1.8%, its largest weekly gain since April 2020, while commodities had their worst week since March 2020.  Meanwhile, digital assets once again fell across the board, the 5th decline in the past 6 weeks, with high correlations and few noteworthy drivers of price outside of macro.
The irony here is that many look to digital assets as an escape from traditional markets, and yet here we all were glued to CNBC looking for clues from the largest central bank.   In some ways, perhaps this is indicative of an asset class growing up, while in other ways it was a stark reminder of how powerless all markets are when it comes to monetary policy.  But do these clues actually matter long-term?  In some ways, absolutely.  The low dollar, low rate environment has been positive for all risk assets, including digital assets.  But in other ways the week-to-week price action has proven to be meaningless.  We’ve talked about the spurious correlations between digital assets and other assets many times, most notably back in September 2020 when digital assets broke away from the herd shortly after another FOMC meeting. For example, at that time, all anyone could talk about was Bitcoin’s correlation to gold, but since then, the two assets couldn’t be less correlated (and at times, are even negatively correlated).   So on the one hand, Fed-driven market reactions are less than ideal for an asset class that is meant to be driven by customer engagement and stakeholder coordination. But on the other hand, it’s always worth remembering that correlations in this new asset are definitely not set in stone. 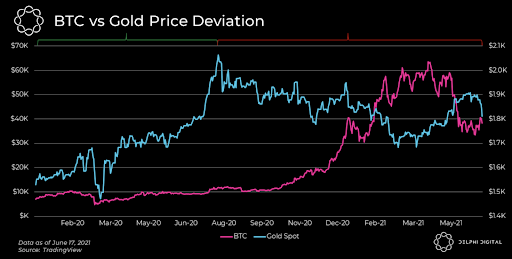 Source: Coinmetrics
A Long-term versus Short-Term View
So where should we look for clues?  For starters, we can look at the private markets versus the public markets.  Most digital assets are now down 50% or more from mid-May highs, leverage and speculation have basically been wiped clean, and the fear and greed index has been hovering near all-time lows.  Coinbase’s retail app has dropped from #1 on the IOS app store in mid-May, to 125th today.  That’s a pretty good indication of how short-term expectations have changed quickly to the downside.
In stark contrast, however, money continues to flow into the private markets, with many deals pricing at higher valuations than where they were priced just a few months ago.  The past week alone saw a variety of newly funded digital assets projects, even as publicly-traded digital assets suffered uniform 10% week-over-week declines.  These include (list courtesy of Galaxy Digital):
Investor appetite remains very strong, as new entrants to the market are choosing to fund private companies and projects as a form of capturing beta to the market.  This is another way of saying the shape of the curve has changed, with steep contango (future prices) but lower spot prices.  In other words, it’s signaling that the market expects prices to go higher in the long-term regardless of near-term price action.
We’ve seen this toggle before -- as new investors seem to switch focus between Bitcoin and Ethereum, between currencies and DeFi, between public and private, and between digital assets and crypto stocks. All of these instruments are various proxies for the growth of this asset class.
Just like with the Fed, the end result is spelled out, but the path it takes to get their changes.
What’s Driving Token Prices?
What We’re Reading This Week
Panama to Present Crypto-Related Bill in July
The 'Gensler Agenda' Wants the SEC to Look Back Rather than Ahead, Say Commissioners
Sygnum Adds Banking Services for DeFi Tokens Including Aave and Uniswap
Goldman Sachs Plans to Offer Ether Futures, Options to its Clients
SEC Again Delays VanEck Bitcoin ETF Decision
Hedge Funds Expect to Hold 7% of Assets in Crypto Within Five Years
Kraken CEO Says Crypto Exchange Could Go Public in 12-18 Months
And That’s Our Two Satoshis!
Thanks for reading everyone!
Questions or comments, just let us know.
The Arca Portfolio Management Team
Jeff Dorman, CFA - Chief Investment Officer
Katie Talati - Head of Research
Hassan Bassiri, CFA - PM / Analyst
Sasha Fleyshman -  Trader
Wes Hansen -  Head of Trading & Operations
Alex Woodard- Analyst
Mike Geraci- Trader
To learn more or talk to us about investing in digital assets and cryptocurrency
call us now at (424) 289-8068.
'