What happened this week in the Digital Assets market
Week-over-Week Price Changes (as of Sunday, 3/13/22) 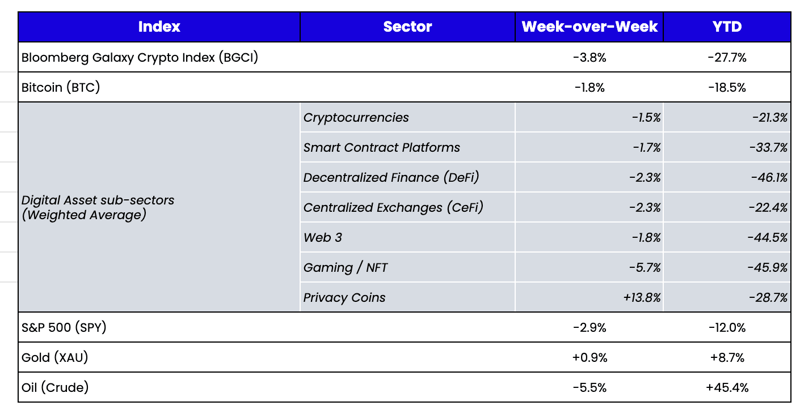 Source: TradingView, CNBC, Bloomberg, Messari
We’ve spoken with institutional and individual investors about digital assets for almost five years now. While everyone’s journey is different with regard to timing, most have a similar basic path—from “complete dismissal” to “lukewarm but willing to learn” to “I get it, and I want to invest.”
Contrary to what you might expect from the negative price action over the past three months, our meetings have never been more constructive. When I casually tweeted about our bullishness on expected new entrants and inflows, we were met with a lot of responses asking us to elaborate further. So we did elaborate, in the third section of today’s writeup, diving deep into the main analogies, one-liners, and concepts that we use in meetings with new investors that often lead to that “aha moment.” But first, let’s discuss the macro and micro market conditions weighing on prices today.

Relative Value
Digital assets declined last week, broadly, in line with continued equity weakness. The “it’s all one risk trade” train continues amidst endless war headlines and a looming recession (as predicted by rising energy prices and a flat yield curve). While it’s felt like “down only” for most of the year, the broader digital assets market is pretty close to unchanged since the crash (week ending January 24th), while equities, bonds, and most currencies have fallen further over this period. Digital assets acted as a leading indicator in November and December before the bond and equity markets really suffered any damages, and their current resistance is potentially acting as a leading indicator again. Bond, equity, and currency indexes are simply playing catch-up.
Volatility markets are urging risk reduction everywhere 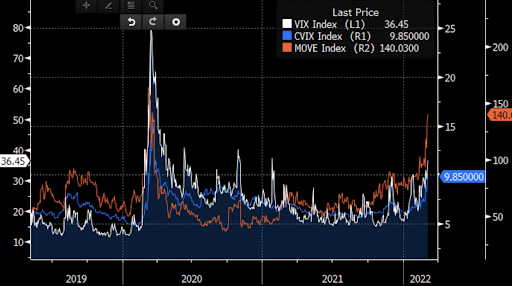 Source: Jon Cheesman, FTX, in an email to clients
Amidst broader carnage, it's interesting to look at what influenced the pockets of relative strength. Bitcoin is now down roughly the same amount as the Nasdaq YTD (-18%), though Bitcoin’s annual returns of +93%, +300%, and +60% the last three years dwarf the gains of the Nasdaq over the same period (+38%, +47%, +26%). High up capture with similar down capture is a metric that will undoubtedly be noticed by investors, even if correlations remain stubbornly high in the near term. Said another way, if two “assets” have the same downside risk, but A has much more upside risk than B, you’d want to own A. Simple.
Similarly, in past episodes of stress in financial markets, you would not have expected these emerging market currencies to outperform the majors, but with the Ruble, the Euro, and the Canadian dollar showing weakness as their monetary and government policies are thrown into question, it’s become harder to identify a true safe haven.

Source: Bloomberg
And of course, it’s no secret that Bitcoin and privacy tokens have outperformed Layer 1 protocols, gaming, Web 3, and Defi this year. It's also not surprising that amortizing tokens like LEO, LUNA, and FTT have significantly outperformed all other digital assets. In a year where gains (outside of commodities) have been very hard to come by thus far, these “relative winners” take on even greater importance. Dispersion is back, and digital assets investing has once again shifted back into what you own, not if you own.

Looking ahead, there are three larger factors that likely matter most for longer-term US equity and digital asset investors:

Another Overhang Removed: Washington
Last week, President Biden released the long-awaited digital assets executive order. Many are calling this a pivotal moment for the industry, even though it will undoubtedly lead to more questions than answers and certainly won’t lead to any action in the short-term. Perhaps most importantly, it indicated a clear future for digital assets in the U.S., which removed another barrier to entry and another overhang for institutional investors.
Galaxy Digital best summed up key takeaways from the EO:

“The existing regulatory framework has been fragmented and disorganized, with states, the CFTC, SEC, IRS, and US Treasury Department each implementing different and sometimes contradictory approaches. As a result, both market participants and policymakers have been calling on the government to provide more regulatory clarity with agency responsibilities better defined. In light of the lack of clarity in current laws, the SEC and DOJ, for example, have been approaching regulation through enforcement actions and fines. FinCEN considers cryptocurrencies to be money considering and thus subject to money transmission rules under the Bank Secrecy Act; IRS considers it to be property subject to capital gains taxes. The CFTC says Bitcoin and Ether are commodities, but the SEC chairman believes that many cryptocurrencies are securities. While all these issues surely will not be sorted by this process, Wednesday's EO nonetheless marks an important step towards a more cohesive, coordinated approach for government policy on the growing cryptocurrency industry. Most importantly, the framing of the EO struck a surprisingly balanced tone that acknowledged the wide adoption and the potential benefits of digital assets. It suggested for the first time that the Administration was accepting of the technology, recognizing its importance in our economy as a new asset class and its potential to improve on the global positioning of the US. The EO calls to examine the differences between different crypto assets which is meaningful because not all crypto assets should be regulated the same way. With acceptance coming top-down from the Administration and bottom up with growing adoption among Americans, policymakers can then direct their attention to more productive and conducive discussions on how to best harness the technology and unlock its potential for the best interests of the nation and its constituents.”

The tone of the executive order is constructive; it acknowledges that digital assets are significant enough to warrant a high level of attention from the U.S. government. The market braced for bad news that did not materialize, which made this announcement a net positive.
The “Aha Moment” for New Digital Asset Investors
As previously discussed, a fly on the wall in our meetings with institutional investors would come away extremely bullish on the future of digital assets. Below are some of the one-liners, analogies, and explanations we use in investor meetings. With an almost 100% hit rate, these discussions lead to an “aha moment” for someone in the meeting.The light bulb goes on; they begin to truly understand why digital assets have immense value and why this is an investable universe in which they need to have an allocation.
Stakeholder alignment:
Market parallels to traditional finance:
Inevitably, some of these explanations begin to resonate with new investors. Over the past six weeks, our society has discovered that money and stocks are not an asset—they are liabilities owed to you (typically by a broker or a bank). Whether or not you can ensure these entities pay you back in full is now in question due to recent activities in Canada, Russia, and the London Metals Exchange. This uncertainty has become a wide-reaching advertisement for ownership of bearer assets like digital assets.
We hope this sneak peek behind the curtain was helpful.
What We’re Reading This Week
Payments Giant Stripe Launches Support for Crypto, NFTs
State Street Inks Institutional Crypto Custody Deal With Copper
Janet Yellen Says Biden’s Crypto Executive Order Supports ‘Responsible Innovation'
Crypto Exchange FTX Sets Up European Unit
YFI, FTM Tank After Andre Cronje, Anton Nell Claim They're Leaving Crypto