What happened this week in the Digital Assets market
Week-over-Week Price Changes (as of Sunday, 11/14/21) 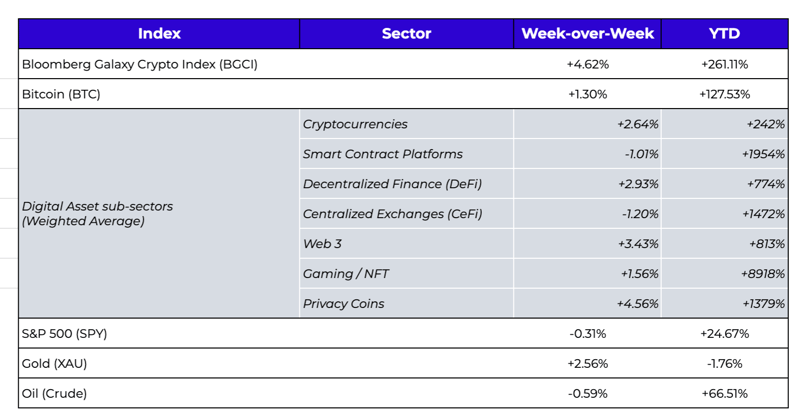 Source: TradingView, CNBC, Bloomberg, Messari
Bitcoin’s reaction to Inflation Data
In an otherwise quiet week for digital assets, US economic data took center stage.  The year-over-year rise in the US Consumer Price Index (CPI) jumped to 6.2% in October, its highest level in over 30 years, and the fifth month in a row where the inflation rate topped 5.0%. The market responded immediately, and rationally.  Government bond yields rose 11 bps, reversing the previous week’s decline in yields, though real yields are at a 70-year low of around -4.6% (so much for the risk-free rate -- the volatility in government bond prices in recent months has picked up to post-pandemic highs).  Even gold briefly woke up, rising 2.6% (though it remains negative YTD).
Government bond volatility is on the rise (courtesy of the MOVE Index)

Source: Bloomberg
But once again, all eyes were on Bitcoin.  A few weeks ago we argued that it was actually increased inflation expectations, and not the newly approved Bitcoin ETF, that was most responsible for Bitcoin’s 40% gain in October.  True to form, Bitcoin reacted immediately to the CPI number.  But also true to form, the rise in Bitcoin’s price back to all-time-highs led to an increase in leveraged longs, followed by a swift liquidation-led selloff after rumors swirled that Evergrande might finally default.  And thus continues the complicated and inconsistent life for those trying to guess make a living off of trading Bitcoin -- one minute it’s an inflation hedge and a safe haven, and the next minute it's a levered risk asset. 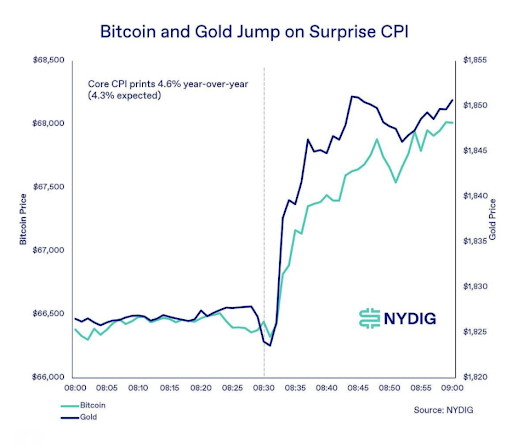 Source: NYDIG
But let’s assume for a second that all digital assets, as well as equities, real estate and other scarce assets, are in fact an inflation hedge.  While everyone with a degree in economics from Twitter University is calling our policy makers morons for driving inflation, the question still remains unanswered -- are we heading towards runaway inflation that can’t be stopped or controlled?  Most likely not.  Recall, the Fed has very explicitly stated that they want to see long-term inflation above 2%.  Well, since inflation has averaged well below 2% for almost two decades, naturally it has to run hot for a period of time in order to bring the average up.  Smart economists like Darius Dale believe the rate of change will start falling soon as the year-over-year comps get tougher, but that the new center of gravity will be closer to 2-3% from 1-2%… which is EXACTLY what the Fed was targeting in the first place.  While the Fed, economists and government officials were clearly wrong about how fast mean reversion would take place, the rate of change will inevitably start to go down - so depending on your “transitory” timeline, the hot inflation reads will most certainly be transitory, eventually.  Using 2yr-over-2yr inflation changes are likely more relevant than YoY changes since last year’s comps were during a pandemic-induced depression.  These smoothed out inflation increases are much more modest than the headline number that everyone is freaking out about.  We saw the same “hyperinflation is coming” headlines in 2010 as well when the YoY data looked artificially high following a weak 2009 depression comp, and that ultimately dissipated.  Further, inflation is likely due more to pent up demand and supply disruptions than money printing and monetary policy, as can be seen in other countries which are seeing far worse inflation than here in the US, even though they didn’t blow nearly as big of a hole in the deficit as the US did.
So whether you agree with the Fed’s policies and goals or not, this is actually playing out exactly as they anticipated and communicated.  We seem set for higher, long-term inflation rates, but not runaway inflation -- which is a very bad backdrop for society, but a very good backdrop for continued strength in all risk assets, like digital assets. 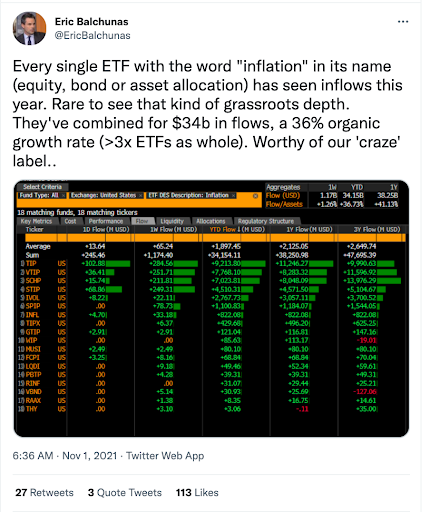 Source: Twitter
O-M-G!!!
The Bitcoin price reaction to the CPI data was a sign of a maturing, efficient market.  But it’s actually in other areas of digital assets that are not driven by algos and traders where we can see the market efficiency in greater detail.   Over a year ago, we wrote about how the price of Binance Coin (BNB) was giving us a real-time look into what the utility value of a token was worth relative to its financial value.  At the time, BNB was one of the few tokens with a robust futures market, and we saw the price of spot BNB and futures diverging due to an increase in the utility value for owning the physical BNB token, which quickly reversed when that short-term increase in the utility went away.   This past week, OMG token gave the market an even more obvious example.
Recently, it was announced that holders of OMG were set to receive an airdrop of new BOBA tokens, but those eligible to receive the reward must be OMG holders of record as of a certain, specific date. In traditional financial terms, OMG set an ex-dividend date, and we would then expect OMG to fall by the exact amount of the “dividend” shortly thereafter.  The difficulty here of course is that we have no idea what BOBA is worth, or where it will trade. 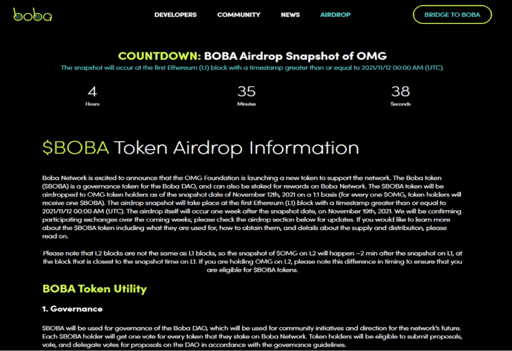 Source
Well, the market gave us a pretty good clue as to what it expects BOBA to be worth.  With a few days left before OMG went ex-dividend, OMG began to massively outperform the OMG December and perpetual futures contracts, to the tune of a 23-27% discount on the perp.  Moreover, the cost of being short OMG Perpetual Futures reached as high as -1.3% per hour, which equates to a cost of 31% per day (or 11,000% per year).  Since many OMG token holders were shorting OMG futures to neutralize the credit risk and isolate the BOBA airdrop, this became a pretty efficient market -- the discount and funding rate represented what the market expected the “BOBA dividend” to be worth.
OMG spot price (bars) diverged from the Perpetual Futures (Red) and 12/31 Futures (Green) 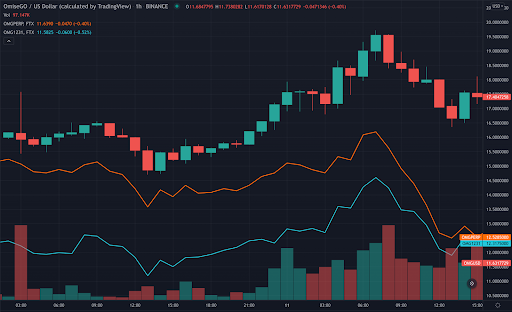 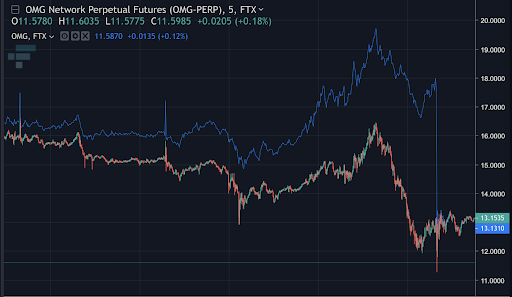 Source: TradingView via FTX
As more and more companies and projects introduce rewards via staking, LP’ing, airdrops and more, the ownership of physical tokens will continue to be more valuable than owning a proxy of that risk via futures.  And if the market continues to evolve to the point where there is no real juice in the spread, the arbitrageurs will end these trades in favor of strong token holders who are willing to take the directional risk.  We expect this to be an important element of market structure going forward.
A Glimpse of a true “Tokenized World” -- Corporates, Munis and Universities
We’ve made a lot of predictions over the years about the future of digital assets, but perhaps none were earlier and more consistently discussed than our view that all corporations, especially those with strong customer loyalty, will soon issue tokens in their capital structures.  I even used Starbucks specifically as an example almost four years ago of a company where shareholders and customers were not sufficiently aligned, whereby a token would bridge this gap.
Last week, Starbucks CEO Kevin Johnson hinted at this becoming a reality.  While we’ve yet to see a token design, most likely this will be underwhelming at first, barely scratching the surface of the power of flexible pass-thru tokens where customers become quasi-equity holders and membership reward holders.  But it’s a start, nonetheless.  We’re already beginning to see municipalities get in the game as well.  And while we still don’t understand why Miami coins were created on the Bitcoin network via Stacks, there’s no denying that MiamiCoin and soon to be NewYorkCoin will have positive outcomes for the municipalities themselves. Overtime, these cities will have to entice their constituents with more value than just novelty items.  Up next, we expect a University or two, who are already investing in digital assets via their endowments, to issue their own tokens -- replacing donations with a “tuition coin” that would be a liquid representation of the value of a future education.  We look forward to the copycat effect, as more and more token issuer types get involved, and the token structures become even more creatively designed.
What’s Driving Token Prices?
What We’re Reading This Week
Discord CEO Hints at Ethereum Compatibility
Bumble Is Swiping Right on Web 3.0 and the Metaverse
JPMorgan Doubles Down On Its Massive Bitcoin Price Prediction—But Adds A Serious Warning
FATF Wants Governments to Hold the People Behind Defi Protocols Accountable
SEC Halts Token Registration for First Legally Recognized DAO