What happened this week in the Digital Assets market
Week-over-Week Price Changes (as of Sunday, 2/27/21) 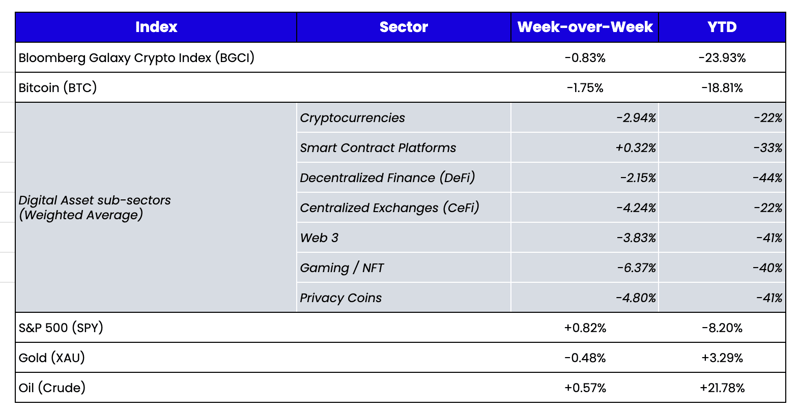 Source: TradingView, CNBC, Bloomberg, Messari
Have We Completely Lost the Plot?
It has been a long day, a long week, a long month, and already a long year. Everyone is on edge—even those lucky enough only to be concerned financially rather than fretting over basic livelihood and freedoms. As I was researching, reading, and discussing markets with others and thinking through the major topics this week, I kept coming back to one main theme:
“Have we completely lost sight of the goal?”
For a second, remove your biases. To those lucky enough to have made fortunes investing in digital assets, ignore the euphoria. For those hellbent on trying to prove digital assets have no purpose, think objectively for a moment. And let’s just look at the facts:
Objectively, without focusing on any of the emotional attachments caused by the riches or losses from digital assets, shouldn’t everyone be incredulous about money, banking, and governments? This is flat-out lunacy. But maybe we’ve all just become so used to this that trying to imagine a different system is even harder than acknowledging abject incompetence.
Digital assets are now at an inflection point. Either this experiment truly shows itself as a better solution, or it begins to die on the vine. The situations pointed out above—among countless other examples of government and banking overreach and hypocrisy—are coming to an ugly head. Every digital asset enthusiast is ready to say, “I told you so,” while every naysayer is equally ready to say, “I told you so.” Which camp gets to utter these words remains to be seen.
Sure, there are still silly debates that distract from the ultimate goal. For example, the SEC warpath around securities laws is cute but doesn’t ultimately matter. Regulated or not, the technology and use cases still have to be in demand. And sure, the media and “no coiners” continue to raise completely unfounded alarms about the backing of stablecoins, despite their continued growth, success, and multiple attestations (UST / USDT / USDC). Yet all of this completely dismisses the fact that the original system we’re moving away from is backed by nothing other than the same government that continues to lead us astray.

Source: Twitter
Meanwhile, while the monetary version of World War III is playing out via antiquated government-controlled banking systems, Treasury reserves, and gold, the Ukrainian government just raised $18 million and counting in Bitcoin, Ethereum, NFTs, and stablecoins via a single tweet with a public deposit address. It’s hard not to be amazed by this.

Source: Twitter
If the entire Decentralized Finance (DeFi) market were a single bank, it would be the 19th largest in the U.S. That’s pretty incredible given how quickly this has been accomplished.
Source: Twitter and Defillama.com
Perhaps our friends at Galaxy Digital put it best—if you remove yourself from the price action, there’s something quite beautiful and inevitable brewing:

“Bitcoin is and has always been dissident tech. Whether as an inflation hedge or vote against modern monetary policies, or to fundraise for dissident activities, Bitcoin has been repeatedly used to protest authority, particularly as a way to protect and build or transfer wealth under oppressive circumstances. The idea that Canada froze Bitcoin wallets is a mischaracterization: it ordered Bitcoin custodians to freeze sanctioned coins, which governments can order from any regulated financial intermediaries regardless of the asset type. That this was possible does not signal that Bitcoin is ineffective as dissident tech.
We wrote in our Crypto Giving report last week about the use of Bitcoin to fund demonstrations by both the “Freedom Convoy” of truckers in Canada and the EndSARS protests against police brutality in Nigeria. Other political dissidents and protest movements that have fundraised using Bitcoin, particularly when conventional fiat banking rails have been blocked or compromised, include but are not limited to:
Bitcoin has been used around the world as dissident tech because of the cryptocurrency's credible neutrality and censorship-resistance.”

Perhaps there is good reason why most digital asset sales amidst this 3-month drawdown have investors simply moving into stablecoins rather than cashing out to U.S. Dollars—still entrenched in the digital asset ecosystem waiting to be utilized or redeployed (record high stablecoin AUM and record-high stablecoin balances sitting on exchanges), while almost every buy has been from new money coming into the ecosystem for the first time, most likely never to leave again.
Can Russia Be Isolated and Contained?
The Russian stock market (RTS Index) suffered its worst day on record last week, and the MSCI Russia Index finished the week down -32.8%, while Russian government CDS widened as much as 700 bps to over 900 bps. The intraweek volatility was nothing short of spectacular, with last Thursday culminating in the following intra-day swings:
Despite significant intraweek volatility, for the week, the VIX declined slightly, gold dropped, and oil gained, while both equities and digital assets moved only marginally. History has shown over the past 50 years that geopolitical events rarely have a long-term sustainable impact on capital markets, even if they are driving every tick today. Zooming out, however, the MSCI Russia's direct impact on global markets is negligible, as Russia’s weight is just ~0.3% in the MSCI All Country World Index. Similarly, the U.S. economy is much less energy-intensive today, so the recent surge in oil prices won’t have as big an impact as it would have in decades past.

Source: Deutsche Bank
Markets may be correct to shrug off the impact from war, where U.S. equities and digital assets may be viewed as one of only a few places to park your money confidently right now. Interestingly, Sunday night’s market open led to an immediate decline in digital assets and equity futures as the Ruble declined and the Russian bank run began. But Russian sanctions came out on Saturday night when only digital asset markets were freely tradeable; the reaction was incredibly muted at the time. Digital asset prices didn't react negatively to Russian bank sanctions until almost 12 hours later when FX markets opened on Sunday, leading to cross-asset quant/macro funds selling everything at once.
Liquid digital assets markets were open all weekend, but the "tail was wagging the dog" as it pertained to price reactions. Most (including me) have no idea how markets will, and should, react to this news and instead are jumping on whatever narrative they want to see play out. For those short/in cash, the natural instinct is to “sell everything because it’s all going lower.” For those long, the natural instinct is that money has to flow somewhere—most likely into gold, U.S. bonds and equities, and even certain digital assets.
But the irony of digital assets going down during a banking crisis is certainly not lost, as the global solution to banking sanctions (digital assets) just traded lower on global banking sanctions.
What We’re Reading This Week
Ethereum Scaling Solution StarkNet Completes Launch – with Goal to Move to Community Control
EU Wants New Anti-Money Laundering Authority to Have Crypto Oversight: Report
Sotheby's Withdrew a Lot of 104 CryptoPunks Before its Auction Was Set to Begin
BitMEX Founders Hayes, Delo Plead Guilty in U.S. Over Money-Laundering Controls