“That’s Our 2 Satoshis” — Meta and the Trickle-Down Effect

What happened this week in the Digital Assets market
Week-over-Week Price Changes (as of Sunday, 10/31/21) 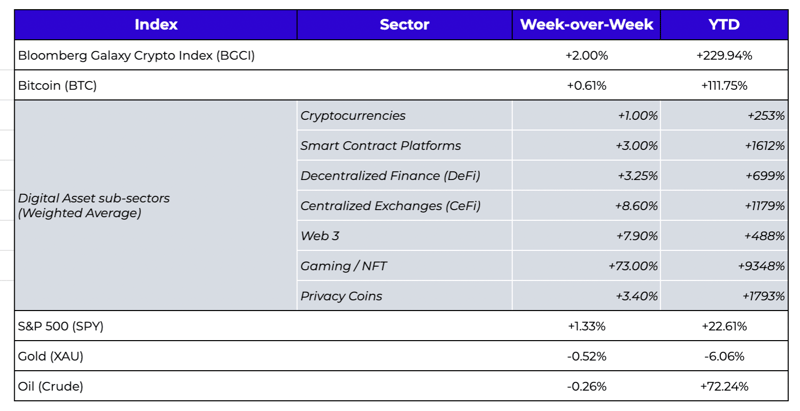 Source: TradingView, CNBC, Bloomberg, Messari
Gaming and NFT Tokens Needed a new Reason to go Higher -- Enter Facebook/Meta
Nearly all risk assets gained considerably in October, a stark reversal from the declining price action seen throughout September.  But in a month that included a 40% Bitcoin rally ahead of the long awaited Bitcoin ETF, and a 7.3% gain for the Nasdaq, it was a completely different area of technology that ultimately stole the show.
A representative sample of gaming and NFT tokens, courtesy of Messari, gained an astonishing +73% last week alone, bringing YTD gains to well over +9000% for the sector as a whole. While a few of these games and metaverses have been around for years, the bulk are relatively new, with only Axie Infinity showing actual, tangible growth in terms of DAUs and revenues.  But last week, during the annual AR/VR conference hosted by Facebook, Mark Zuckerberg announced a complete 180 degree shift in its core business. Specifically, Zuckerburg announced that Facebook was changing its name to “Meta”, and highlighted the development in “crypto and NFTs” as important technical work needed for building the metaverse.  The market reaction was exactly what you’d expect -- since there is a limited number of pure-play investments with which to express a view on the growth of metaverses, investors bought them all. Facebook instantaneously turned a sector from “cool idea, little traction” to “traction is inevitable”.
Performance YTD of select mid and large-cap Gaming & NFT tokens 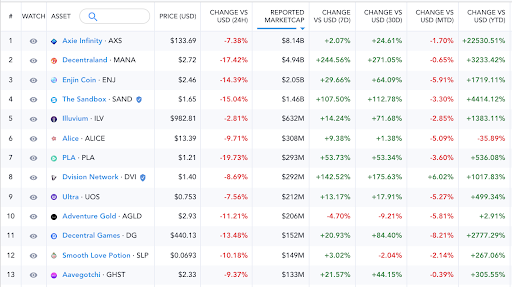 Source: Messari
Facebook has been in the news a lot recently for the wrong reasons, and therefore this creates natural skepticism that this full company rebrand to the metaverse was prompted solely by public relations.  Further, as Jon Cheesman of FTX pointed out, Facebook’s stock has severely underperformed the NDX, giving Facebook even more reason to pivot.  Regardless of motive, Meta is now here, and this may very well end up being the most important data point along the cultural shift from Web 2.0 to Web 3.0. This move by Facebook also shifts the onus to other Web 2.0 leaders, who will now have to develop a strategy of their own to be competitive IF Web 3.0 truly takes off.
FB equity recent underperformance vs the NDX 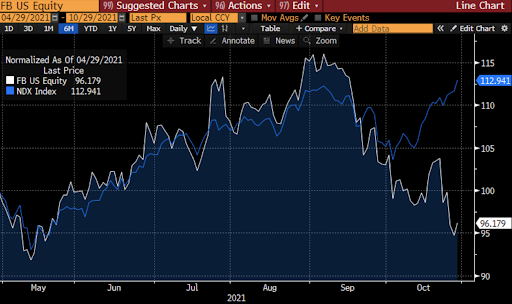 Source: FTX / Bloomberg
Now, we’ve seen a lot of head fakes over the years from traditional finance and tech companies, all of whom have used Blockchain in some way to garner interest, despite most being empty earnings call phrases with little substance behind it.  Even Facebook itself rope-a-doped the market over two years ago with its now perpetually delayed “Libra/Diem/whatever” project. 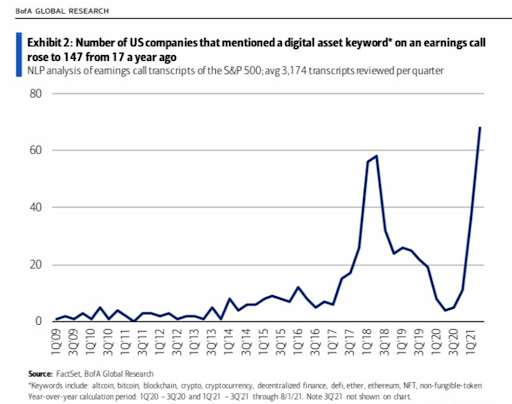 Source: Bank of America Research
Despite potential flaws, the Facebook news is once again too big to ignore.  Our friends at FalconX summed up the potential significance of this announcement succinctly:

“The social media giant's announcement has been universally panned by crypto natives and non-crypto natives alike, but while the Orwelian images of Zuckerberg walking amongst crowds of VR headset wearing audiences and memes of Squid Games characters with Meta symbols on their masks are undoubtedly hilarious, the development may be one of the most structurally important announcements for crypto writ large. Gaming, NFTs and the metaverse may finally solve one of the issues that has perplexed crypto since inception: broad-based adoption. Take for example Axie Infinity. The Pokemon-like game has close to 2mm DAUs. In contrast, DeFi, once considered the "killer app" of crypto, in its entirety has interacted with 3.7mm users since 2018. Even ignoring the flawed nature of that 3.7mm figure (users are measured as addresses and one user can have multiple addresses), the power of gaming is apparent: every single day, Axie sees over half of the user base that DeFi has accumulated... ever. Facebook...err, Meta.... has 1.9B DAUs. In Meta's announcement, a vision of open interaction with blockchain projects was painted. This means that a sliver of those 1.9B DAUs could find themselves using Axie, Decentraland and other blockchain-based games, explaining the rally in gaming/NFT/metaverse tokens post-announcement. Think bigger: gaming gets "normies" into crypto, period. Axie users come for the game but will soon be using a DEX built on Ronin. Gaming/metaverse trickles into DeFi and the broader ecosystem. Now Meta's execution remains to be seen, but if done well, it could port millions, if not billions, of users into crypto - providing massive structural support to the future of crypto.

We’ve spent a lot of time this year writing about how onramps into digital assets have shifted.  Whereas a few years ago, 100% of new digital asset participants came through the Bitcoin doorway, today, it’s far more likely to see investors enter through Tether, USDC, Ethereum, Solana, NFTs or gaming apps.  Facebook/Meta just ran these doors over with a mile-wide tunnel.
Speaking of onramps...
… Robinhood whiffed on earnings last week, sending HOOD stock down -17% for October, well below its IPO price. The culprit - weaker volumes and revenues from the trading of digital assets.  The poor performance for HOOD is exacerbated further when compared to other “crypto stocks”, many of which had record months in October:
October performance of select companies focused on digital assets 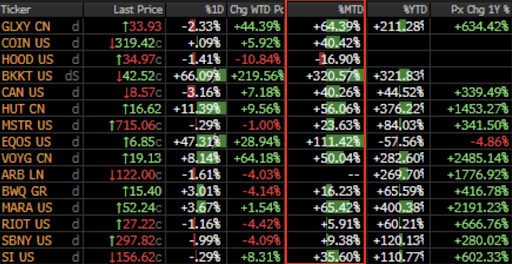 Source; Bloomberg
While Robinhood’s 19 million monthly active users pales in comparison to Facebook, it may end up being just as significant.  Currently, Robinhood only allows the trading of 7 digital assets, 4 of which are 2017 relics, while DOGE is a meme-coin.  As the digital asset investable universe continues to morph towards DeFi, Web 3.0, NFTs, Gaming, Sports and other sectors, Robinhood users will continue to fall behind.  Robinhood may have no choice but to start listing other digital assets, and when this happens, it could be yet another knock-on effect that jolts the system. Look for “Robinhood listings” to be a new event-driven investment play for 2022.

Source: Messari
Speaking of Knock-on Effects…
Let’s get back to the Bitcoin ETF.  A lot of attention has been (rightly) focused on Bitcoin, with the new ProShares BITO ETF soaking up a lot of the market’s new and existing capital.  New inflows into BITO were over $1.3 bn, but equally important, the amount of cash needed as collateral for futures soared as well. While Bitcoin itself gained 40% in October, the knock-on-effect of the ETF cash requirements is now rippling through the market.
The ETFs have brought new buying power to CME futures, which has pushed the CME futures curve into a pretty healthy contango. The current basis between spot and futures sits between 8-12% annualized across the curve, but it reached as high as 20% at one point last month. This basis trade attracts as much US dollar capital as institutional desks can pour into it.  As a result of the newfound demand for cash to post collateral on CME, we’re seeing knock-on effects in lending, as centralized USDC and USDT rates have moved into double-digits, as well as options volatility.  Higher yields also increase activity throughout DeFi.  For example Curve, which is essentially a primitive of Ethereum DeFi focused on the trading of stablecoins, makes up roughly 10% of Ethereum TVL, and Curve’s TVL rose in October from around $14bn to almost $20bn.  In short, a single product offering meant to cater to retail is trickling down to other parts of the digital assets economy.
What Should We Expect in November?
As “Uptober” shifts to “NoDownBer”, we once again look at the top-down macro forces before assessing how individual tokens will perform.  Last week was a mixed bag, as earnings continue to be strong but interest rates suggest a slow down.  The spread between 5- and 30-year Treasury rates flattened to the narrowest level since March 2020, wiping out a lot of gains in the “inflation” camp.  Rising front-end rates suggest that the Fed will raise rates soon, while falling 10- and 30-year bonds indicate lowered economic growth expectations.
As Deutsche Bank noted, it’s interesting that the moves were mostly sparked by non-U.S. factors, given that the Federal Reserve is in a media blackout and the week was largely devoid of top-tier U.S. data until Thursday. Instead, the catalysts were largely international -- hot Australian core inflation, U.K. slashing issuance plans, and a surprisingly hawkish Bank of Canada.
This has set up an interesting dynamic.  While the VIX has fallen 40% from recent highs, MOVE continues to diverge from equity implied vol. This divergence from equity implied vol (at pre-pandemic lows) from rates implied vol (at YTD highs) is unsustainable in the long run. 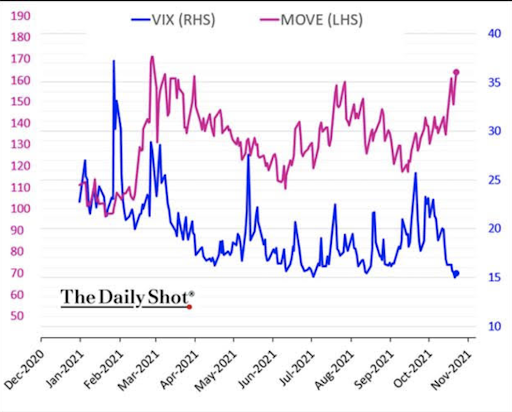 Source: Cliffwater
While there are a lot of reasons to be bullish on individual digital assets and the industry at large, ultimately a lot is riding on the direction of the economy and interest rates.  That said, we have just turned the calendar, and institutional investor inflows have caused a significant “new month rally” throughout the year.  With momentum on its side, it's likely the next few weeks will be strong for asset prices.  The Bloomberg Galaxy Crypto Index has returned on average +15.53%  for the first 10 days of every month, compared to a flat performance for the rest of the month.
Returns for the Bloomberg Galaxy Crypto Index YTD 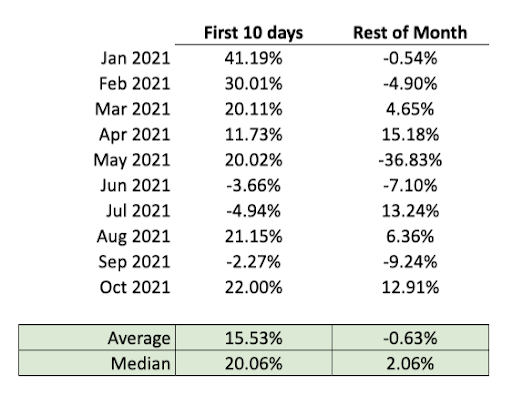