Written by Jeff Dorman, CFA
Jun 17, 2019
What happened this week in the Crypto markets?
The Bitcoin Rally, in Retrospect
Global equities and crypto continue to show near zero correlation, but the factors that led to the May stock pullback were the same factors that sparked the bullish tone for crypto, namely the trade war and continued capital flight out of Asia.  After crypto gained roughly 50% in May versus stocks retreating 5-10%, it was therefore a bit troubling when the first week of June started with a 5% equity rally and a 10% crypto decline. Needless to say, we started paying close attention. This past week, stocks rose modestly as equity investors struggled to find direction from trade headlines and conflicting economic reports.  On the one hand, business optimism climbed to a seven-month high in May, and retail sales increased for the third straight month. On the other hand, the Morgan Stanley Business Conditions Index fell by 32 points in June, to a level of 13 from a level of 45 in May. This drop was the largest one-month decline on record.
Equities squeaked out a weekly gain, even as oil again retreated, so it was quite surprising when Bitcoin and the rest of the crypto market jumped 15% last week. Of course, all eyes were on Bitcoin (BTC), which rose 18% on the week with steady gains, culminating in a sharp weekend rally.
BTC Rose 18% Week-Over-Week, with a Huge Weekend Burst 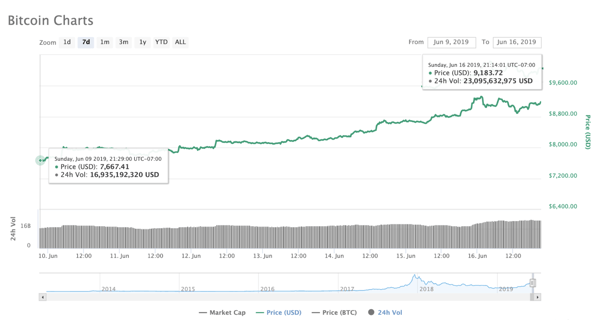 Source: CoinMarketCap
In real-time, this crypto rally was difficult to see coming.  It was only a week ago that people were calling for Bitcoin to potentially retest $6000, and now there is euphoria in the markets with expectations that $10,000 is right around the corner.  While we don’t care to speculate on price, we will say that, in retrospect, there were certainly a lot of pieces supporting the Mosaic Theory that led to this sudden Bitcoin reversal.

We’ve seen many bursts like this before that prove to be short-lived, especially those that occur over low volume weekends.  Further, the Crypto Fear & Greed Index(which measures volatility, sentiment, momentum and trends) is at all-time highs, which has generally been a leading indicator of crashes.  But even if the market pullbacks from these levels, the long-term trend is still quite favorable for Bitcoin and a handful of other tokens capable of accruing long-term value. As seen below, the drops are becoming faster and less pronounced, and we’d expect a similar response should this happen again. 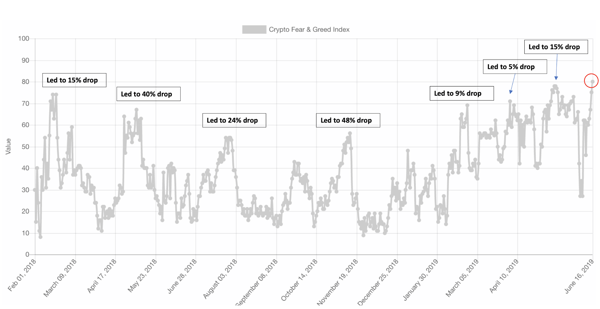 Source: Crypto Fear & Greed Index
The 800-lb Gorilla, Giant Elephant in the Room - Facebook
Facebook Coin
Facebook Cryptocurrency
ZuckBucks
GlobalCoin
Whatever we’re calling it these days, it’s coming. This week. Facebook will soon have its own digital currency.  The Facebook whitepaper is coming out on Tuesday, and this has been a very divisive topic.  Some argue this will be the greatest thing that ever happened to crypto, given Facebook’s global reach. Others, especially Bitcoin maximalists, denounce this token, given Facebook’s checkered past. 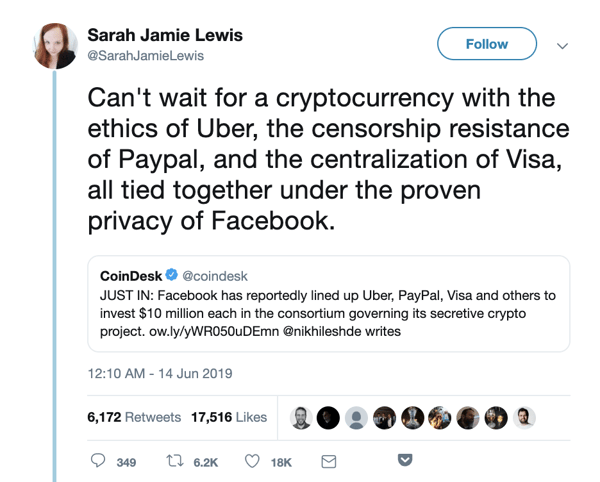 As we’ve been discussing for months, we think this is undeniably bullish for digital assets, because best distribution always beats out best technology.

The fact of the matter is Facebook’s Day 1 will be bigger than any other digital asset’s year 10.  Facebook will bring over 2.0 bn people into the digital asset ecosystem overnight, which further supports the notion that both communication (via internet) and assets (via blockchain) can travel seamlessly and without borders.  And once a new person enters the digital assets ecosystem via Facebook, they will begin to find other digital assets as well. And let’s face it, the size of the current crypto ecosystem is dwarfed by the size of the non-crypto ecosystem.  So in a roundabout way, Facebook’s Coin competing with Bitcoin and other digital assets will actually help spur more Bitcoin adoption. For example, Angry Birds somehow made it onto every iPhone in 2010 whether you were a gamer or not. It doesn’t really matter what gets you into the ecosystem; once there, every blockchain app, and every digital token, becomes much more readily accessible.

So ultimately this is positive for every digital asset, with the exception of other stabletokens.  GlobalCoin may ultimately eat other stabletokens’ lunch, as Facebook can actually solve real problems - giving asset storage options for millions of unbanked consumers, and lowering banking costs for merchants who accept GlobalCoin as payment.

As Meltem Demirors from CoinShares said:

[This will]  allow Facebook to introduce payments into its platform without the hassle of becoming a bank or creating a financial services company. My prediction: every major platform will eventually become a "bank" of sorts”. The foray into corporate coins has been going on for some time, but GlobalCoin is definitely the BIGGEST given the 2.5 billion users across Facebook, Whatsapp, and Instagram. The HEAT is on! Every board room will be deliberating this move.

We may remember Tuesday, June 18th as a tipping point for crypto.

Notable Movers and Shakers
As noted above, last week saw a whirlwind of events – Binance announced that they will be restricting access to their trading platform for US customers, Facebook announced that their GlobalCoin token will be launched on a testnet on June 18th (with an accompanying whitepaper), and Bitcoin finished the week up 18%. Even with these large scale events happening, there were specific tokens that stood out:

What We’re Reading this Week
Blockchain's Appeal Is Limited for Retail Banks, McKinsey Says
According to a study from McKinsey, retail banks have been slow to adopt blockchain technology despite the benefits. They point to consumer behavior, explaining it is difficult to change and adopt new technologies at scale. McKinsey also estimates that $4b per year could be saved by using blockchain in cross-border payments and $1b annually in operational expenses.
Is Binance Finally Walking the Straight and Narrow?
As regulators have flexed their authority in the last few months, the largest crypto exchange by volume, Binance, announced changes that will have drastic effects on its customers. They first announced the launch of a US exchange that would be run by a partner organization, BAM Trading Services Inc. BAM is registered with FinCen as a Money Transmitter Business (MSB). It is unclear if this exchange will share the same orderbook and therefore liquidity as the primary Binance exchange. A few days later Binance officially announced that it would no longer allow US based accounts to trade on its main platform beginning in September. After flaunting its non-compliance for many years, Binance may be finally cleaning up its act.
Target Jumping on the Blockchain Train
Target quietly released a blog post last week detailing its plan to use blockchain technology for supply chain management. The retailer is building its own supply chain blockchain while also contributing code to the Hyperledger Grid blockchain project. The project, called ConsenSource, was started to track suppliers in Target’s paper manufacturing has now been made open-source. Target is the latest in a long string of corporate businesses to institute blockchain technology.  Ironically, this same week all of Target’s cash registers crashed at once, leaving some to pontificate on a future without cash registers.

Employees Can Now Be Paid in ETH
Bitwage, a startup that helps companies pay their employees in crypto, has just added ETH to its system in addition to Bitcoin. Since 2014, Bitwage has been paying employees in Bitcoin and currently has 30,000 individuals on its system. They offer either direct deposits or team wages which are payroll payments for entire companies used primarily by projects with distributed freelance teams.
Gaming Giant Ubisoft Exploring Blockchain
The French-based video game maker, Ubisoft, is reportedly exploring using blockchain technology for in-game purchases. The use case is for when players purchase in-game items, ownership of these items can be tracked across multiple games and ownership is provable. If this sounds familiar, crypto protocol World Asset Exchange (WAX) has been working on a solution for this with an expected launch at the end of the month.
And That’s Our Two Satoshis!
Thanks for reading everyone!
Questions or comments, just let us know.
The Arca Portfolio Management Team
Jeff Dorman, CFA - Chief Investment Officer
Katie Talati - Head of Research
Hassan Bassiri, CFA - PM / Analyst
Sasha Fleyshman -  Trader
To learn more or talk to us about investing in digital assets and cryptocurrency
call us now at (424) 289-8068.