What happened this week in the Digital Assets market
Week-over-Week Price Changes (as of Sunday, 11/07/21)

Source: TradingView, CNBC, Bloomberg, Messari
Has the Fat Protocol Thesis Been Proven?
The Fed finally capitulated and began the tapering process, agreeing to stem the purchases of Treasuries and mortgage-backed bonds.  The last time we had a tapering announcement was in May 2013, and at that time, Fed Chairman Ben Bernanke surprised the market which led to a 6% decline in equities before ultimately rallying 17% from the lows to close out the year.  But the Jerome Powell-led Federal Reserve does not surprise markets… at all. They are overly transparent and consistent to a fault, and it's quite-likely that the Fed-induced selloff already happened in September, when equities fell 5% amidst explicit signs that the tapering was likely.
With no surprises from the Fed, US equities once again hit all-time highs, and the VIX touched a new YTD low.  Perhaps counter-intuitively, bond yields also fell across the curve, completely retracing the bond selloff that also happened a few months ago. Amidst this backdrop, it’s not surprising that many digital assets also hit new all-time highs last week.  As has been the case most of the year, many different parts of the ecosystem participated.
But these gains pale in compression to layer 1 smart contract platforms, which saw SOL, AVAX, LUNA, BNB and ETH (among others) march to new all-time highs last week.
YTD Price Performance of Select Layer 1 Smart Contract Platforms 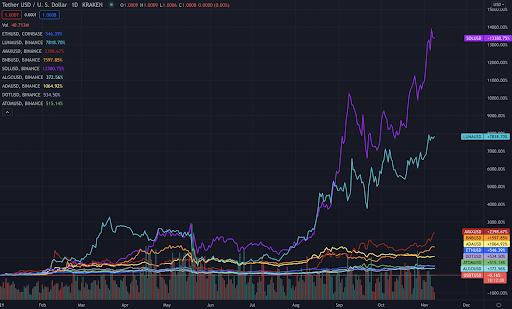 Source: TradingView
Layer 1 smart contract protocols are like the app store to DeFi/gaming/NFT apps. They are the rails on which smart contracts are built and projects can harness for their specific designs. In 2016, years before most blockchain-based apps were even created and certainly before any achieved success, Joel Monegro and others at Union Square Ventures penned the “Fat Protocol Thesis”, which essentially predicted that the protocol layer would create and capture more value than those applications built upon them.  Five years later, it’s possible that this thesis has been proven.  Not only has the price performance of layer 1 Protocol tokens significantly outpaced that of any other sector (other than select NFT and Gaming assets), but the total market cap increases YTD have now surpassed that of Bitcoin despite starting the year collectively making up less than 20% of Bitcoin’s value. 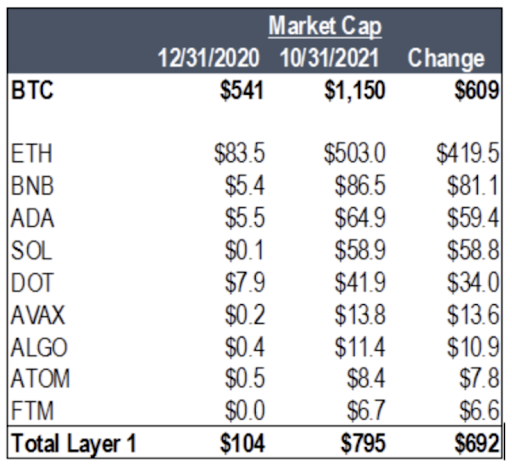 Source: CoinMarketCap
The data is compelling. But I’d still argue that the fat protocol thesis hasn’t been proven yet. The crazy rise in layer 1 valuations could be due to four other reasons that have nothing to do with value being captured:
While layer 1 blockchains clearly have value, most of the value to date (outside of ETH and LUNA which have deflationary forces) comes from the fact that they cannot be valued, and thus have no ceiling. That’s attractive for long shot investing (low probability with massive upside). But eventually, the totality of applications built on blockchains has to be larger than the platforms themselves. As we continue to see more successful applications (like what we’ve seen from ETH-based DeFi, Gaming and NFTs thus far), traditional investors will flock more to these investments since they can more easily be valued using traditional cash flow analysis.
In fact, right around the time when ETH hit $25 bn market cap and $10 bn TVL (summer 2020), the first successful consumer-facing apps (DeFi) began to flourish.  DeFi tokens boomed and outperformed ETH by ~7x over the next 9 months. After that, gaming and NFT apps (and tokens) built on Ethereum were the next to flourish relatively, with large outperformance versus ETH itself. Today, with so many Ethereum competitors now reaching similar market caps and TVLs, from here, these layer 1s will need a few killer apps to succeed in order to sustain their rising market caps. If these success stories happen, the apps themselves will likely outperform the layer 1s as we’ve seen historically with Ethereum-based apps.   If, however, the apps don’t come to fruition, the layer 1s will likely suffer like we’ve seen with disappointing layer 1 projects like ICP, EOS, ZIL and XTZ. Either way, the risk / reward is now shifting towards the applications. 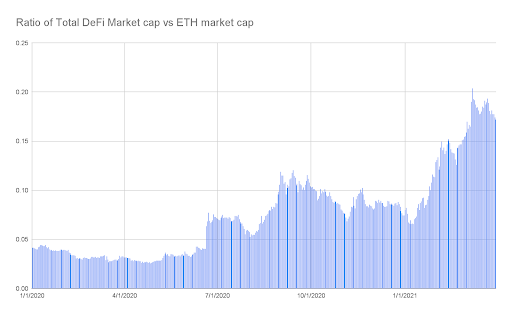 Source: CoinMarketCap & Arca Estimates
It’s worth noting that even within the virtual walls of Arca, not everyone agrees.  It was pointed out recently by Connor King that layer 1 blockchain dominance in digital assets mirrors that of equities, where the largest stocks are networks and ecosystems (FB, AMZN, AAPL, GOOGL) rather than applications. While true, the counterargument is that the collective size of ALL applications exceeds that of the networks themselves.  Of course the Apple app store is bigger than the biggest app, and Amazon is bigger than the biggest store, but collectively...
Similarly, Arca Senior Research Analyst, Nick Hotz, believes that the closer proxy for layer 1 value versus application value is thinking about currency value versus equity market capitalization of a country. Like equities, digital asset applications rely on the government (layer 1) to provide a medium of exchange, rules of the road and security.  Essentially, this means that layer 1 blockchain tokens represent the country, but unless there are thousands of stores, restaurants, schools and housing in the country, the country itself becomes worthless.  This makes sense. In the US for example, broad money supply is worth about $20T while equity capitalization is $50T. And that ratio should vary based on how much value that government (layer 1) is providing to its native apps.
While the fat protocol thesis has been a very profitable and ahead of its time idea, the reason these investments have worked so well for investors to date is largely due to a lack of alternative places to invest, and a lack of traction from the applications themselves, not necessarily value capture.
Stablecoin Regulation
On Monday, the Presidential working group on financial markets (PWG) released a long-awaited report on stablecoins. The 22-page report from the PWG included thoughts from members of the Fed, SEC, CFTC, FDIC and OCC. In essence, the report attempted to set forth the risks associated with stablecoins, and set the table for an inevitable showdown. Each of these protection groups seeks more authority from Congress to regulate, and requests that Congress pass clarifying legislation to establish a cohesive regulatory framework.
The digital assets community had mixed feelings with regard to the report. In our opinion, the report was fairly balanced, and did not introduce much in the way of new information.  The digital assets market reacted with a sigh of relief, ultimately trading higher simply due to the lack of landmines.
We believe there were four main takeaways:
It will take years for these new laws and regulations to take shape.  But in the meantime, it’s encouraging to at least see the efforts of regulators focused in the right place.
What’s Driving Token Prices?
What We’re Reading This Week
Incoming New York Mayor Eric Adams Vows to Take First Three Paychecks in Bitcoin
U.S. Regulators Recommend Issuers of ‘Stablecoins' Be Policed Like Banks
Amazon Web Services Looks to Drive Crypto Settlement and Custody to the Cloud
DCG is Hiring Advisors for a Planned Wealth Management Business Aimed at Crypto Millionaires
Metaverse Startup The Sandbox Closes $93M Series B Led by Softbank
And That’s Our Two Satoshis!
Thanks for reading everyone!
Questions or comments, just let us know.
The Arca Portfolio Management Team
Jeff Dorman, CFA - Chief Investment Officer
Katie Talati - Head of Research
Hassan Bassiri, CFA - PM / Analyst
Sasha Fleyshman -  PM
Alex Woodard - Research Analyst
Andrew Stein - Research Analyst
Nick Hotz, CFA - Research Analyst
Wes Hansen - Director of Trading & Operations
Mike Geraci -  Trader
Kyle Doane -  Trading Operations
David Nage -  Principal, Venture investing
Michael Dershewitz -  COO of Arca Funds
To learn more or talk to us about investing in digital assets and cryptocurrency
call us now at (424) 289-8068.