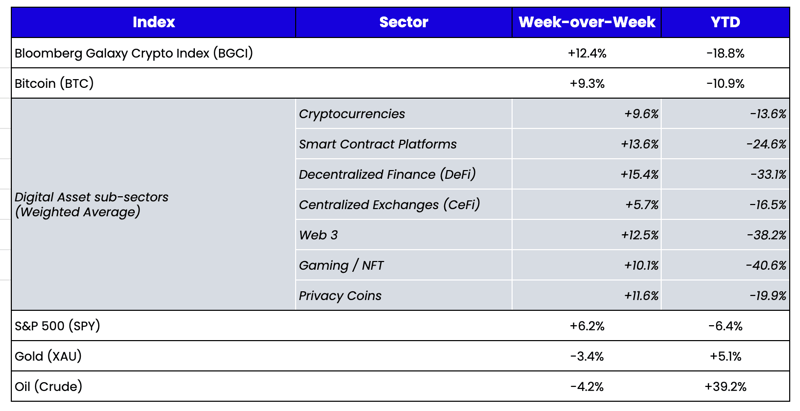 Source: TradingView, CNBC, Bloomberg, Messari
Why Did Markets Go Higher on Bad News?
As expected, the Federal Reserve hiked rates by 25 bps last week and laid out a path for future rate hikes, with their dot plots now reflecting a median of six more expected rate hikes into the end of the year. The Fed is now signaling that rising inflation will be around longer than initially expected as it pushed its median 2022 year-end projection to 4.3%, but at the same time, they are signaling that they believe secular stagnation could return once supply chain-driven inflationary pressures subside, prompting them to shift their long-run policy rate down to 2.375% versus 2.5% previously.
The hawkish testimony from Fed Chairman Powell and the rate hike itself led to a surge in prices across digital assets and most U.S. stock indexes. Digital assets notched double-digit percentage gains across the board, the S&P 500 rose +6.2%, and the Nasdaq jumped +8.2%—their best week since election week in November 2020. While this price reaction surprised many, it’s actually consistent with November 2020’s large post-election surge. In October 2020, following back-to-back monthly declines for equity indices as uncertainty loomed over the results of the election, we wrote:

“At this point, you could elect a Martian president and risk assets would rally simply because the uncertainty discount would be removed.”

Investors hate uncertainty more than they hate bad outcomes. And that’s exactly where markets stand today. We've been talking about rate hikes since the November CPI report showed heightened inflation. We finally got definitive action five months later, even though the bond market sniffed this out months ago and had already priced in the entire 2022 plan. For the past five months, the market has been wrestling with uncertainty about rates, war, and their impact on GDP/earnings; last week’s poor outcome regarding the path of rates was overpowered by the weight off the market’s chest about the unknown. The “storm before the calm” had been brewing, and it looks like the storm has finally passed. Since markets are forward-looking and have long memories, investors had already priced in a 3-year tightening cycle before it even started. Looking beyond that is a world with much less unknown. That’s a good thing. Markets responded accordingly, creating a solid reminder that not everything is a crisis.
2-year U.S. Treasury yields have been rising since November’s CPI report

Source: CNBC
The reversal in risk was even more pronounced with Chinese equities, as the Hang Seng rallied 17% off the lows and KWEB, the popular Chinese tech ETF, rallied 31% in a single day! China’s policymakers had a Mario Draghi “whatever it takes” moment and pledged to keep Chinese capital markets stable, support overseas stock listings, ease a crackdown on technology firms, support the battered real-estate market, and stimulate the economy. The ensuing two-day rebound restored $1.3 trillion of market value in Hong Kong and the mainland.
While we’d love to discuss digital asset-specific news and events driving price action, macro is still driving the bus for now, and that bus was loaded with buyers last week.
Wait, Why Do the Actions of a Few Elite Still Drive Markets?
It’s fitting that the 31% move higher in Chinese tech happened just days after JP Morgan called China uninvestable. JP Morgan is, of course, not alone. Between research arms of the world's largest banks and government agencies, we're riddled with bad calls that lead to zero consequences. Yet we still hang on to their every word. Why?
Every single prediction or statement the Fed has made—regarding repo, “not QE”, rate intentions, inflation, and much more—has been flat out wrong. There is simply no accountability with the Fed. In 2019, Powell called for 4 rate hikes but cut rates 3 times and increased the balance sheet by $400 billion even after stating that the balance sheet was being reduced. In 2020, they released projections that, in retrospect, are laughable. The laughter at the Fed’s incompetence grows by the day. But it goes well beyond the Federal Reserve. Just about anywhere you look, there’s data supporting a government that may mean well but simply makes matters worse (see government sponsored cheese).
As information continues to be ubiquitous and free, it’s only a matter of time before these FOMC meetings don’t matter anymore. 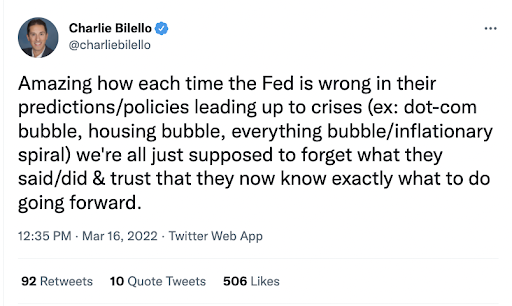 Source: Twitter
Ape Coin (APE)
Digital assets were mostly higher on lower volumes, with few outliers or events driving prices. As such, the market became uber-focused on the launch of Ape Coin (APE)—a new governance token in the NFT sector distributed to anyone who held an NFT of the Bored Ape Yacht Club (BAYC) collection. The APE token aims to promote “culture, gaming, and commerce used to empower a decentralized community building at the forefront of web3.” The APE token has a total supply of 1 billion tokens—15% of which went to BAYC and MAYC (Mutant Apes, an offshoot of the original BAYC) NFT owners in an airdrop, 47% went to the DAO's ecosystem fund, and the remaining 38% was allocated to the Yuga Labs team, founders, and launch partners.
Most interestingly, all major exchanges listed the APE token immediately—a largely unprecedented move. APE came to public markets at $5-8 on exchanges, trading as high as $40 for a short time before touching lows of $6.50; it’s currently resting around $10. While fully diluted market cap is a misleading concept, there’s no question that a $10 billion FDV for this is flat-out ridiculous out of the gates. It was driven, in part, by the deep-pocketed venture capital investors that funded this project (and many others) at valuations that are inconsistent with how public markets are trading. On the flip side, Apes (made up of Bored Ape Yacht Club, Bored Ape Kennel Club, and Mutant Ape Yacht Club) is now one of the most recognizable brands. Still, no more than 10,000 people will ever own any of the three NFT collections, so opening this brand up to a larger audience via APE may have a lot of optionality. We’ve barely scratched the surface concerning how and where NFTs like BAYC will end up penetrating the mainstream, and since BAYC NFT owners also own the IP, each owner becomes their own little business entity licensing out their product. This could make the APE token a really interesting tool for coordination and royalties amongst BAYC holders. Furthermore, the APE token also grants optionality into the expanding universe that Yuga Labs introduces, as they will reportedly weave the token into the fabric of all new products and services.
The APE token still appears egregiously expensive. But at the same time, it is now a pure-play way to play NFT growth. Even if it is just a memecoin for now, every time the market decides it wants to be long on NFTs, APE will be the beneficiary in the same way that SAND and MANA benefited from the Metaverse craze at the tail end of 2021.
What We’re Reading This Week
Bored Apes Creator Yuga Labs Acquires IP for Cryptopunks and Meebits
Mark Zuckerberg Says NFTs Are Coming Soon to Instagram
Congress Letter Accuses SEC of U.S. Law Violation and Overburdening the Crypto Industry
ConsenSys Raises $450 million Series D at $7 billion Valuation
Bored Ape NFT Volumes Spike after ApeCoin Launch
And That’s Our Two Satoshis!
Thanks for reading everyone!
Questions or comments, just let us know.
The Arca Portfolio Management Team
Jeff Dorman, CFA - Chief Investment Officer
Katie Talati - Director of Research
Hassan Bassiri, CFA - Portfolio Manager
Sasha Fleyshman - Portfolio Manager
Alex Woodard - Research Analyst
Nick Hotz, CFA - Research Analyst
Bodhi Pinker- Research Analyst
Wes Hansen - Director of Trading & Operations
Mike Geraci - Trader
Kyle Doane - Defi Trader
David Nage - Principal, Venture Investing
Michael Dershewitz - Principal, Venture Investing
Michal Benedykcinski - Research Analyst
Andrew Masotti - Trading Operations
Topher Macpherson - Trading Operations