The Magic Word is “Uncertainty”

Written by Jeff Dorman, CFA
Oct 5, 2020
What happened this week in the Digital Assets markets?
Week-over-Week Price Changes (as of Sunday, 10/05/20)
Source: TradingView, CNBC, Bloomberg
A Weak September and a Weak Start to October
Digital asset prices were modestly lower last week, while equities rebounded slightly. The weak performance meant that Bitcoin, the broader digital assets market, and equities all closed September with their worst monthly performance figures since March.
We’ve long held the opinion that all risk assets would trader higher until the 4Q, because there would be no new relevant information until 3Q earnings and 4Q guidance emerges. Well here we are, October, but this risk-asset rally may actually have more legs than previously thought.
For starters, the trend-following crowd is all over the place. A week ago, net short positions were at a 5-year high. Last week, $32 billion worth of equities were purchased, and now speculative longs are at a 5-year high. That type of fund flow volatility demonstrates how quickly a narrative can change, and how low conviction is. When you combine that wishy-washiness with the fact that everyone is focused on the US Dollar and stimulus announcements, while simultaneously remaining cautious, it appears that any news that clears up uncertainty will be met positively by market participants. At this point, you could elect a Martian president and risk assets would rally simply because the uncertainty discount would be removed.
Hedge Fund and Trend Following CTAs Net Positioning 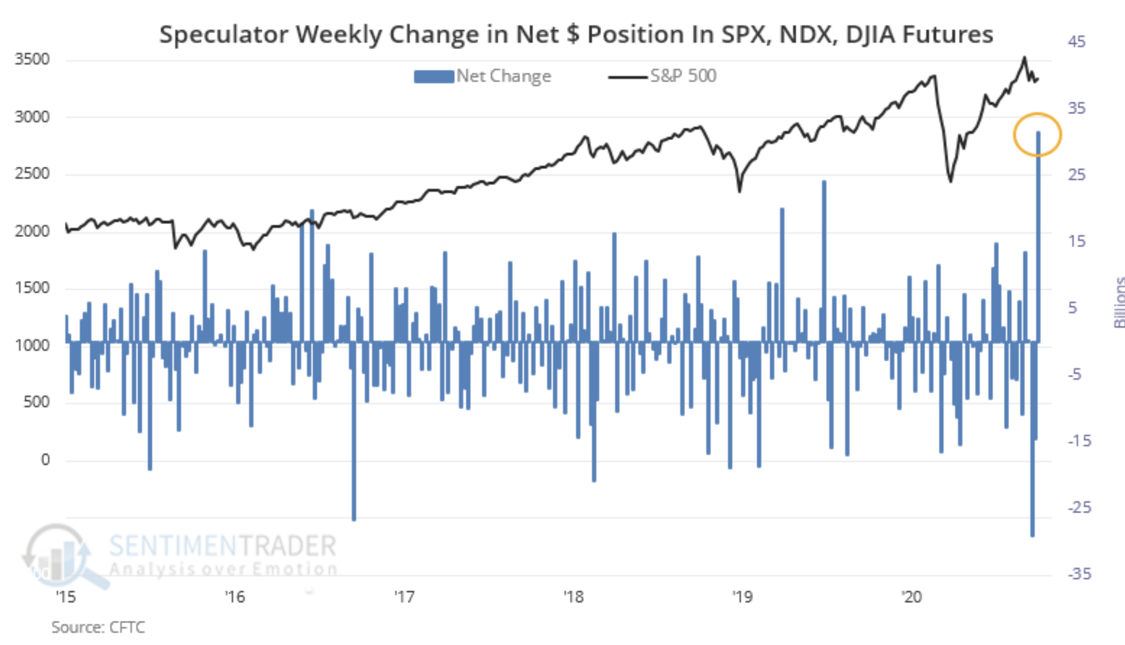 Source: Twitter / @sentimenTrader
Perfect Clarity into Last Week’s News Cycle Would Not Have Helped
Last week proved to be a great example of this uncertainty. If you had absolute perfect clarity of last week’s events before they unfolded, I’m not sure you would have made any more money trading.   Risk assets, from equities to Bitcoin, largely moved sideways despite these massive events:

For Bitcoin specifically, it’s actually quite remarkable how well it performed in the face of endless bad news, perhaps a bit of a respite from endless underreactions to positive news all year.
Bitcoin 1-month ATM implied volatility barely budged off all-time lows

Source: Skew
Does BitMEX Even Matter?
Before we answer that, a bit of background courtesy of our friends at Galaxy Digital:
As the graph below shows, open interest on Bitmex Bitcoin futures contracts has been declining for two years, as competition (both regulated via the CME and unregulated) coupled with fear of further legal actions against Bitmex has pushed traders elsewhere. While a few years ago, a headline like this might have sent Bitcoin down 10-20% or more, in today’s more diverse and uncertain times, the reaction was pretty muted. Again, had you known ahead of time that the Bitmex news was coming, would you have thought to sell Bitcoin straddles? Because ultimately selling volatility turned out to be the best trade last week.
Bitmex Open Interest has been declining long before last week’s news

Source: Skew
While the price reaction wasn’t much to write home about, the “regulatory overhang” debate has been much more interesting. On the one-hand, here comes that word “uncertainty” again. While the CFTC/DOJ actions clear up some uncertainty with regard to Bitmex, they adds further uncertainty with regard to other parts of the digital assets ecosystem that may or may not be at risk. Will cleaning up this lone bad actor finally clear the path towards a Bitcoin ETF, or is this just the first shoe to drop in a string of regulatory crackdowns? After all, there were some positive takeaways from the CFTC announcement. But once again, we ask, “does it really matter”?
Let’s answer a question with another question, this time from Arca’s Chief Marketing Officer, who is about as far removed from price action as you could possibly be while working at an asset management firm dedicated to digital assets. Even she felt the uproar and uncertainty last week, prompting her to ask internally:

“I don’t get it. All of those bombshells came out this year about how traditional banks allowed for copious amounts of money laundering, and that’s not stopping anyone from using banks. Why is this even an issue for anyone regarding whether or not to use digital assets?”

Great question Sumana. The difference of course is that the banks are already regulated, they just break the rules constantly (and often intentionally), and no one can stop them or really wants to stop them because they pay taxes and employ a lot of people and help keep the economic machine humming alone. But since there are no clear-cut regulations in the digital assets world, it’s much easier to just hang regulation over the industry forever. Death by uncertainty.
It's funny how narratives work. "Digital assets are used for crime" is an accepted risk factor when you talk to many investors who have not yet fully completed their education or due diligence. Yet no one uses this as an excuse not to own US dollars or bank stocks despite illegal activity, after activity, after activity.
Our friends at Messari summed this hypocrisy up perfectly:

“Many were quick to point out the hypocrisy inherent in the DOJ’s actions here. Did BitMEX serve US customers in violation of a number of laws? Hard to make a case that they didn’t. BitMEX executives are, however, facing serious jail time in the same week JP Morgan settled in court after causing market participants over $300M in losses in a precious metal spoofing scandal, without any criminal charges. It’s not outrageous to question the even hand of justice here.”

What about DeFi? Once again, Uncertainty Looms
While Bitcoin and tokens issued by Bitmex’s exchange competitors held up remarkably well last week, its decentralized counterparts fared much worse. Ironically, a crackdown on a major centralized exchange was somehow a catalyst for selling tokens issued by decentralized solutions that aim to protect against these very bad actors. Following a month where leading Decentralized Exchange, Uniswap, outpaced leading Centralized Exchange, Coinbase, in terms of trading volumes, the prices of DeFi tokens have actually plummeted, further separating price from fundamentals.
DeFi 30-day Price Change vs. Annualized Earnings Change 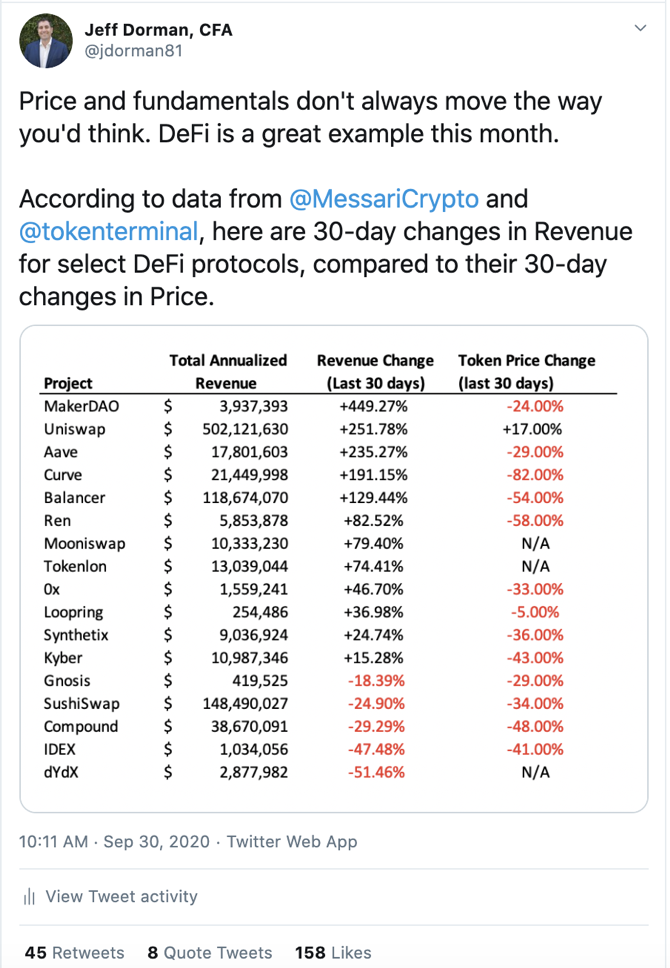 Not all tokens are created equal of course. Some DeFi tokens are structured in a way that they accrue no economic value regardless of earnings (fees generated by the protocol or platform), while other tokens explicitly accrue value when underlying earnings increase. But the shocking dislocation between price and earnings recently either means investors are anticipating a big slowdown in user activity, or the selling pressure may be short-lived.
Perhaps this is once again a case of uncertainty. To date, there have been no real broad-based digital indices that traders can use to hedge risk in a moment’s notice.   As such, Bitcoin (and to some extent Ethereum) have become de facto benchmarks and risk indexes, often bought and sold simply to manage overall portfolio betas and deltas. But the recent excitement surrounding DeFi has sparked the launch of several tradable DeFi Indexes (Binance, FTX, and Set Protocol all over indexes), each with various underlying assets and weightings. This allows traders who don’t necessarily understand the individual components of DeFi to now take a broader view, and after a monumental rise in prices from June through August, the path of least resistance seems to be lower. While one might expect the price of the underlying assets to drive the index prices, it may be the case that the opposite is occurring. Similar to credit market indexes, the ability to trade risk in larger sizes eliminates much of the need to trade the underlying securities. This results in a dynamic where one buys their favorite tokens in the spot market, and adjusts betas continuously using indexes.
If this is indeed the case, then the fundamentals don’t matter much until the market starts to head the other way. When uncertainty subsides and buyers of individual tokens return, we may see a short squeeze in the indexes and the underlying tokens that skews price action even further.
What’s Driving Token Prices?
Whereas the headlines for the digital assets space was bountiful last week, price action was much less so. Bitcoin finished the week down 1%, with Bitcoin’s percentage of the overall market falling 50 bps. With most of the market trading in lock step as it absorbed all of the breaking news (see above), one asset stood out in particular:
What We’re Reading this Week

The Uniswap Token Offering is a Tipping Point