What happened this week in the Digital Assets market
Week-over-Week Price Changes (as of Sunday, 10/11/21)

Bitcoin is Reacting Well to Current Events
We’ve written very little about Bitcoin this year, and when we have, it’s typically been in a less than flattering manner.  We’ve suggested that Bitcoin is no longer critical to the success or failure of digital assets as the asset class continues to evolve and mature, citing, amongst other reasons:
We’re not negative on Bitcoin at all (quite the opposite actually), but we do feel the narratives surrounding Bitcoin are often misleading (typically created by the individuals and firms who have put all of their eggs in one basket).  Basically, we love “Bitcoin the asset”, but have been frustrated by “Bitcoin the community of false narratives”.
That said, this week was undeniably all about Bitcoin. We still saw a lot of dispersion amongst digital assets with numerous big winners and losers, so the market didn’t quite resemble October 2020 when Bitcoin rose while every other digital asset fell, but Bitcoin news and price action definitely dominated the market as Bitcoin gained +13% week-over-week.  Why? Digital asset participants are pricing in an increased probability of an approval for a futures-based Bitcoin ETF by the SEC this month (an opinion with which Arca does not share). 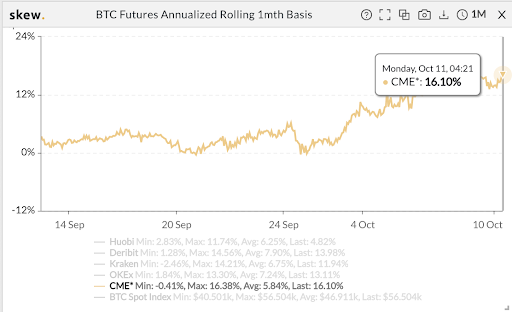 Source: Skew
On top of ETF speculation, the rising Bitcoin correlation with equities finally broke down last week.  This may have been due to multiple, unrelated instances of centralized systems and institutions failing all at once, which served as a reminder of how important decentralization is.  Last week we saw:
Congress’ ineptitude on full display related to the debt ceiling debacle, leading USA CDS to rise and a real possibility that we print a trillion dollar coin to solve our problems 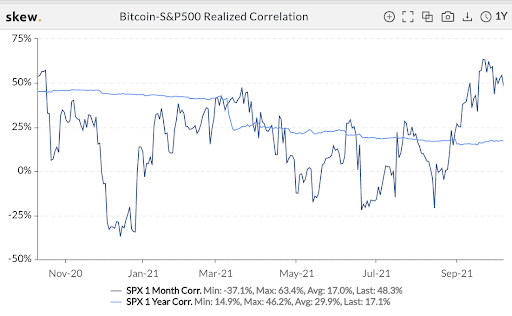 Source: Skew
When you combine the centralized failures with regulatory uncertainty, a weakening tech sector, and renewed inflation fears, it became a perfect storm for Bitcoin.  And for the first time really all year, Bitcoin moved higher because of these narratives rather than narratives being created post-mortem to explain an unnatural move in Bitcoin’s price. Whether or not this decoupling will last remains to be seen, but one thing is certain -- gold certainly isn’t the answer anymore.

Source: Twitter
Regulation and Tether, Again
Another week has gone by where we were on the receiving end of hundreds of questions about Tether and US regulations.  While we’ve discussed both ad nauseum this year, Arca CEO Rayne Steinberg had an interesting take this week on US regulation.  In Arca’s Q3 update to investors, Steinberg profoundly wrote:

“Many in the digital asset space have identified the current uptick in regulatory attention as a “crisis.” This may be true, but not in the conventional interpretation of crisis. JFK famously stated: “The Chinese use two brush strokes to write the word, ‘crisis’. One brush stroke stands for danger; the other for opportunity. In a crisis, be aware of the danger – but recognize the opportunity.” This is an overly simplified interpretation and the word “opportunity” is more accurately translated to mean “a turning point” in the Chinese language, but the spirit of the sentiment is the same. In times of crisis, there is great danger, but there are also opportunities for those that are prepared and nimble. A shifting regulatory environment is only one aspect of this rapidly evolving ecosystem that we are contemplating at Arca. Our balanced, patient approach puts us in a camp where we see more opportunity than danger. We are at the forefront of the charge towards a future where digital assets touch all aspects of our lives.”

That quote is especially interesting considering the onslaught of regulatory news on the horizon.  The market currently awaits a Bitcoin ETF decision and a report from the White House on stablecoins, while the FDIC has indicated possible FDIC protections on stablecoins.  Perhaps it is not a coincidence then that Bloomberg devoted a cover story to Tether right before these large decisions are made. This time, Bloomberg went with humor in its take-down of Tether and its market leading $71 billion US-dollar stablecoin, and once again, we responded with our take, which is that this is really not new news at all.  Tether is backed by assets which probably add up to 100% of reserves today (in good times with good marks), but likely wouldn't stay fully backed if there was a huge stress to the system, no different than every money market fund and every other stablecoin. The USDT stablecoin could "break the buck" if everyone redeemed at once, but there's just no reason why everyone would redeem at once, and therefore it's probably going to be fine.  But "probably fine" isn't good enough for most people, who may continue to avoid an entire industry, and even short Tether despite a very low potential payoff net of financing, over a low probability risk.
Even if USDT does break the buck and collapses to say 80 cents on the dollar, that equals $14 bn of losses in a $2.5 trillion asset class where -20% moves happen all the time.  And whether this is reassuring or not, it just doesn’t seem like anyone cares if USDT ends up being worth 20% less than it's supposed to be worth.  So Tether users are basically saying:
"I know the risks"
"I'm willing to take those risks"
"I find it worthwhile to own USDT and enjoy its flexibility rather than taking on government risk and the lack of utility that comes with cash in the traditional banking system".
At the end of the day, one simply cannot eliminate risk.  All you can do is calculate risk, and transfer risk.  Those accepting Tether risk are taking a calculated and known risk, and are choosing to transfer risk to a centralized company instead of trusting their own local government.
It was worth reading the Bloomberg article though just for this quote, “Traders send billions of perfectly good U.S. dollars to the Inspector Gadget co-creator’s Bahamian bank in exchange for digital tokens conjured by the Mighty Ducks guy and run by executives who are targets of a U.S. criminal investigation."  This quote was funny in a lot of ways, but mostly because the author used the phrase "perfectly good US Dollars" during a time period where the US may potentially default on its debt due to the ineptitude of Congress and our central bankers, and the best solution seems to be to print a Trillion dollar coin out of thin air.
Air Drops are Reinventing the Dynamic between Company and Customer
In both our annual beginning of the year predictions and mid-year review, we mentioned “rewards” as one of the most important themes that we anticipated would drive growth in 2021.   Via these rewards, digital assets have become the greatest capital formation and customer bootstrapping tactic ever created.  Essentially, well structured tokens and projects have taken everything that people were doing daily for free and converted this sweat equity into real money.  Rewards come in all shapes and sizes, but three recent projects have proven yet again how effective these systems are at encouraging growth and creating sticky customers.
While airdrops themselves aren't a feature of blockchains, they are an effective customer growth tactic that mostly fell flat until recently, that is made easier to execute via blockchain. Token issuers have become more creative with their token designs to encourage usage and add customers.  Retroactive airdrops align users with the platform, and while there are some kinks to work out (see Ribbon Finance), and they run the risk of regulatory attention, it’s clear airdrops are going to be a big part of customer acquisition and retention for years to come.
What’s Driving Token Prices?
What We’re Reading This Week
$22M Drained From Compound Contract That Was Hit for $80M Last Week
SEC Subpoenas USDC Stablecoin Backer Circle
Bank of America Debuts Crypto Research Amid ‘Growing’ Institutional Interest
US FDIC Said to Be Studying Deposit Insurance for Stablecoins
SEC Approves ETF for 'Bitcoin Revolution Companies', Portfolio Includes Tesla and Twitter