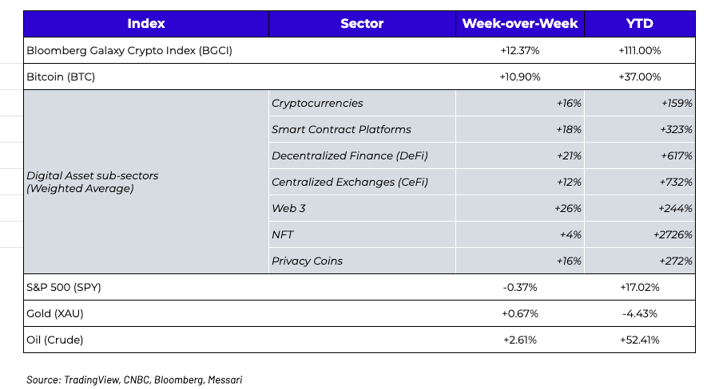 Put Your Rally Caps Back On
At the end of June, we revealed 10 reasons why digital assets would likely bounce back from a 6-week depression, and thus far this has proven accurate.  If we had room for an 11th reason, it would be that cash continues to pour into risk assets.  For equities, YTD inflows stand at $580 billion, which if we continue at this pace, would be more inflows in one year than in the past 20 years combined.  Digital assets continue to be the other asset class that is attracting capital at record paces, only it’s much more difficult to track and quantify this data due to the fragmentation of private fund vehicles and retail investors that invest in more than just Bitcoin.
The last week in July saw an acceleration of gains, putting a cherry on top of a strong month for digital assets.  In some ways, the 10-day rally to end the month looked similar to that of April 2019, when Bitcoin and other digital assets jumped ~25% in a single day (April 1st).  Last week’s move wasn’t as quick nor as violent, but it was set up by similar factors.  Market positioning was wrong and offsides (a lot of shorts bracing for another move lower), and there were simply too many bullish signals appearing in short succession to keep prices down.  Amongst these signals:
The graph below shows just how offsides the market was.  Bitcoin futures liquidations (used as a proxy for overall market positioning) on July 26th were almost entirely from shorts being bought in (blue bar), which was one of the largest liquidations of the year, and the only large liquidation that heavily skewed towards shorts (typically liquidations are from price declines and longs being liquidated -- the red bars).

Source: Skew
Naturally, market pundits (primarily those with a lot riding on Bitcoin’s success), were quick to point out how Bitcoin led the market rally.   For example, NYDIG (which only offers Bitcoin products), wrote the following in their weekly note to clients:

“Bitcoin dominance, a measure of its share of total crypto industry market cap, is back on the rise after hitting a low of 40% ahead of the May price correction...in times of broad crypto market corrections, investors tend to seek the relative safety of bitcoin over other less proven digital assets.”

NYDIG wasn’t alone with this narrative.  Our inbox was littered with articles last week spouting similar fact-less stories.  Unfortunately, these continuous claims about Bitcoin’s dominance and Bitcoin’s safety aren’t backed up by any actual data.  If they had been, the data clearly shows that Bitcoin is neither defensive nor outperforming other digital assets (something we touched on a few weeks ago).  Bitcoin not only remains one of the worst performing digital assets YTD, but if you look at Bitcoin versus the top tokens from every other sub-sector of digital assets (DeFi, CeFi, NFTs, Gaming, Layer 1s/2s, Web 3.0) over various time periods, you can clearly see that there is a shift happening.  Bitcoin no longer outperforms the market on the way down (not defensive), and it also lags the market on the way up (not a market leader).  In other words, Bitcoin is displaying both poor upcapture and poor downcapture.
Below are the returns for Bitcoin versus Ethereum and other Top Tokens over various time periods. You can clearly see that Bitcoin’s declines have been in line with  (and sometimes worse than) most other top digital assets, while it’s gains have been underwhelming.  We ran this data over 4 time periods:

This isn’t meant to suggest that Bitcoin is a bad asset to own.  Bitcoin could become a $10 trillion asset one day, which would be a massive gain for Bitcoin investors (~$500k/coin), while Bitcoin simultaneously becomes a much smaller player in the overall digital asset industry due to the inevitable growth of other sectors, and the introduction of new digital assets.  It is easy to love Bitcoin for certain macro reasons, while also recognizing that it’s fate and price no longer have any bearing on the fate/price of ETH, NFTs, DeFi, Gaming, and other digital assets.  This market has grown up and evolved.  Being “pro-Bitcoin” doesn’t mean you have to be “pro-Bitcoin at the expense of everything else”.  The “Bitcoin versus” narratives need to end immediately, starting with the irrelevant Bitcoin Dominance index.  Bitcoin is not a defensive asset within digital assets, and owning Bitcoin isn’t mutually exclusive with other digital assets. Bitcoin is a great asset, and so are many others, and their independent success/failures will be for entirely different reasons.
So instead of forcing a stale and inaccurate narrative, let’s turn to one set of great assets that actually did lead the market higher last week...
NFTs got Punk’d
The NFT ecosystem remains red hot.  Yesterday, OpenSea daily volume eclipsed $53 million, which is 8x the volume for the entire month of January, and 30-50% the monthly volumes for every month from January until July. Meanwhile, NFT volumes as a whole are beginning to eclipse their March peak, with projects across the board receiving a significant increase in demand.

Source: Dune Analytics
There were a series of events last week that attributed to the large spike in the sector: Shopify made it possible for sellers to sell NFTs directly through their platform (with the Chicago Bulls being the first user), Fractional went live with their protocol which allows for fractionalized ownership of NFTs (thereby offering fungible liquidity for an otherwise non-fungible asset), and then there was the spark that lit the powder keg.

On Friday, a one-block purchase of 104 CryptoPunks hit the tape ($6.6 million) - the dynamics of the purchase are rather interesting, and are explained in this thread, as well as the post mortem here. From there, the aftershocks were felt in other “high quality” NFT projects, such as Fidenza and AutoGlyphs. The follow through has been impressive, and there is an interesting takeaway here: to date, a vast majority of NFT collectors/investors are involved in NFTs due to an honest interest in the sector and the assets within it. Purchases of this size introduce new capital into the sector; while some of the sales will undoubtedly lead to outflows, it is likely that the money is reinjected into other projects. The main deterrent to the NFT sector, to date, has been around the difficulty to source liquidity, and therefore ‘true value’. With the type of action (both in development and volume) being seen the past few weeks (and really the past few months), there is reason to believe that these markets will find liquidity faster than anticipated.
As silly as NFTs sound to some, it’s worth noting that the rise in scarce, bearer, digital assets isn’t too different from what we’ve seen in traditional markets for the past two decades.  The majority of growth in the equity market has come from companies that sell services, and own intangible assets versus those that own tangible assets.  As Joe Weisenthal of Bloomberg pointed out recently, “Between Bitcoin, NFTs, trading cards, sneakers as an asset class and so on… there's just a general bull market in bearer assets of all sorts.”
Markets are shifting away from owning physical property, and moving towards digital property and digital services. 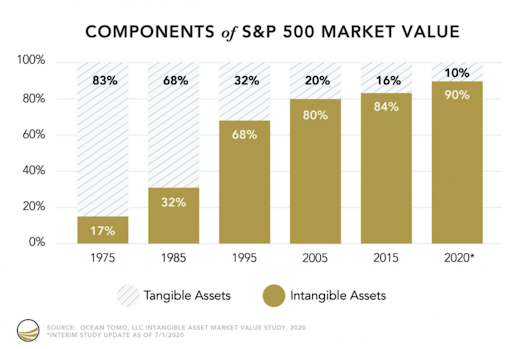