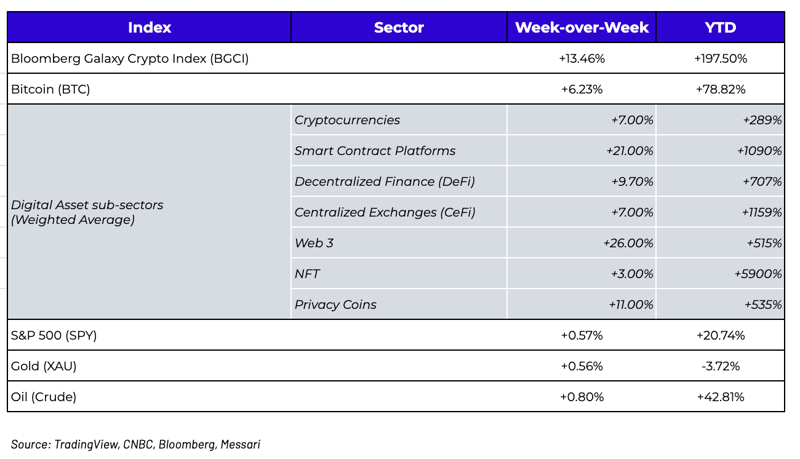 “Owning Bitcoin is like owning GE stock during the Dot.com boom”
Bitcoin investors rejoiced as Bitcoin finally broke out to a huge modest 6% gain last week, once again underperforming the broader market.  The popular cryptocurrency is up a very respectable 78% YTD, but this places Bitcoin near last place amongst digital asset returns YTD, trailing almost all other currencies, smart contract protocols, DeFi apps, Web 3 tokens, NFT and gaming platforms, and just about everything else that is investable in digital form.  The recent Bitcoin lull sparked a tweet suggesting that “owning Bitcoin is like owning GE stock during the Dotcom boom”, which is funny for a few reasons.  First, it implies that a ~10-year old technological breakthrough that is now competing on the world stage as a legitimate currency contender and touches as many different investor types as US Treasuries is somehow now a boring conglomerate.   Second, GE stock actually rose roughly +600% from 1995-2000, which was hardly a disappointing return, even if it did underperform the Nasdaq and many individual tech stocks.
But the point was clear… Bitcoin has never before been this unloved.

Source: Twitter
In fact, Real Vision released the results of their digital asset survey recently, and their audience now only holds just a 5.92% weighting to Bitcoin, down from 30-40% Bitcoin exposure in prior surveys.  Compare this to the leading passive “diversified digital assets index”, the Bitwise 10, which still has an egregious 58% weighting towards Bitcoin.  The tide has shifted.
We’ve been as vocal as anyone regarding why this shift makes sense and will likely continue.  Bitcoin is a completely different asset than the rest of digital assets, with completely different attributes and properties, and an increasingly separate investor base.  Further, there are seemingly endless possibilities for new digital token types and issuers, and as they are launched, evolve and succeed, it will naturally take market share from Bitcoin (meaning Bitcoin dominance, by definition, has to trend towards zero).  That doesn’t mean Bitcoin will always underperform; it simply means that there is no reason why it should keep pace or perform in line with other completely different assets that share no semblance to the oldest cryptocurrency.  But Bitcoin is far from dead.  Last year you could have said similar things about Bitcoin’s relative underperformance, and Bitcoin went on to rise from the dead with a 168% gain in the final 3 months of 2020.  It’s very likely that Bitcoin plays catchup again this year, as the macro environment continues to favor owning Bitcoin.
Meanwhile, Ethereum is gaining speed.  Ethereum has gained 69%, 59%, 105%, 159%, 18% and 71% in the last 6 quarters.  Total value locked has increased from $5 billion two years ago to $130 billion today. The leading non-custodial wallet for Ethereum and Ethereum-based applications, MetaMask, said its monthly active users hit 10 million in July, increasing from 545k monthly users in July 2020, representing growth of over 1,800%.

Source: Skew
And yet even Ethereum’s jaw-dropping 435% YTD return is taking a back-seat to other layer 1 smart contract protocols (like Solana +7545% YTD, Terra luna +5180% and Cardano +1538%), leading NFTs and NFT/gaming platforms (like Axie Infinity +13,853% YTD) and certain Web3 tokens (like Arweave +1982% YTD and Helium +1690% YTD), most of which are showing incredible fundamental growth supporting the increased market caps.
Needless to say, there is a lot going on in digital assets.  And it all starts with the passionate (and sometimes myopic) communities.
WAGMI Ser
Don’t worry if you don’t know what “WAGMI” or “Ser” mean.  Investing in digital assets these days requires learning a whole new vernacular. It also requires understanding passionate communities, the likes of which we’ve just flat out never seen before.
This past week, a new NFT was launched called “Loot”.  In layman terms, it’s a series of index cards with random but unique words on them. The canvas is blank -- anyone can now build games using these NFTs, similar to how Ethereum was a blank smart contract canvas and any developer could build an app upon it.  Loot is the equivalent of giving everyone playing cards before any card games were invented, but empowering and incentivizing everyone who owns a card to start creating games…. blackjack, euchre, poker, gin rummy, go fish, etc would all be built by random community members over time, but no one could play if they didn’t have access to the cards, and the profits from these games would be shared among token holders.  Whether this works or not remains to be seen, but the sense of community and imagination is already overwhelming, as are the jokes about how fast this went from non-existent to self-perceived worth.  But these grassroot projects are no joke -- it sparks something much deeper from a social investing and psychological standpoint. 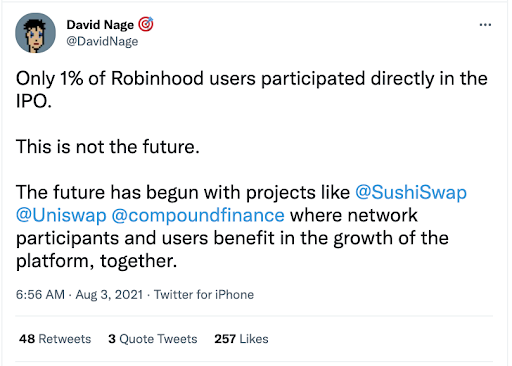 Previous Story
← Let’s Have a Rational Conversation about NFTs
Next Story
Low Correlations, Green Shoots and Coinbase versus the SEC →

The Good, Bad & Ugly of Voluntary Reporting and Transparency

Low Correlations, Green Shoots and Coinbase versus the SEC

Let’s Have a Rational Conversation about NFTs