Low Correlations, Green Shoots and Coinbase versus the SEC 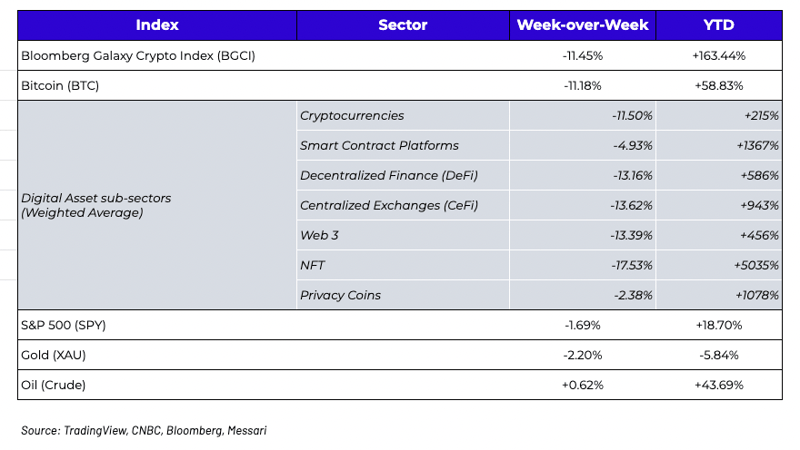 A wild market flush, but green shoots everywhere
As has been the case in eight out of nine months so far this year, digital assets began the month with a rally, likely driven by institutional inflows.  But the September rally quickly faded on Tuesday with an all-too-common occurrence…  a leveraged-induced, fast and furious, liquidation-driven selloff.  At this point, this isn’t much of a story.  Just about every digital asset participant now has the data to see when leverage is building in the system -- the spot/futures basis widens, funding rates turn positive, skew turns negative, sentiment turns increasingly bullish, and lending rates rise.  When this happens, a sudden reversal is just a question of “when”, not “if”.  The graphs below show Bitcoin and Ethereum liquidations, though you’d see a similar looking chart regardless of which asset you choose.  Total liquidations across all digital assets reached over $3.5 billion in just over an hour.
While the liquidations themselves perhaps aren’t all that noteworthy, the market reaction following Tuesday’s selloff most certainly was.
BTC & ETH Futures Liquidations (Red = Longs liquidated / Blue = Shorts Liquidated)

Source: Skew
First, Tuesday’s selloff happened in a completely isolated vacuum.  On the same day that many digital assets fell 20-40% peak-to-trough, very little happened elsewhere across global markets.
However, a few days later, we began to see cracks in other risk assets, indicating that digital assets may be acting as a “risk on/off leading indicator.”
Second, while we saw high correlations amongst digital assets on Tuesday during the market rout, we saw even greater return dispersion throughout the rest of the week.  By week-end, almost half the market had gained +10-30%  (Layer 1 protocols, SOL/FTT and its surrounding ecosystem) while the other half of the market declined -10-30% (Bitcoin, ETH and ETH-based DeFi, Gaming/NFT tokens).   Not only was the rally impressive for those tokens that bucked the weaker trend, but it was encouraging to see tokens ultimately trade based on information, fund flows, and fundamental improvements rather than just student-body left structural declines.  Last week was a good reminder that digital assets are now a complex, alpha-driven asset class.
The SEC, the Fed and the Looming Fight
The Tweet heard around the world came from Brian Armstrong, CEO of Coinbase, calling out the SEC for not engaging in a constructive dialogue with the company and falling short on their obligations to provide regulatory clarity.  This came after the SEC issued a Wells notice to Coinbase, which means there was already a violation and that the SEC is now giving Coinbase one last chance to defend itself before enforcement action is brought.  Coinbase appears to be going on the offensive rather than backing down. To our knowledge, all Coinbase has done so far is announce a future product offering, and create a waitlist for it -- which means the SEC may be operating here without due process.  But independent of any future wrongdoing, or interpretation of the SEC’s actions, there is an interesting and developing subplot that doesn’t seem likely to end any time soon.  Investors and builders in digital assets are openly and aggressively calling out hypocrisy and potential wrongdoing by politicians and regulators.

Source: Twitter
At traditional financial firms, compliance and legal officers take every measure possible to avoid ending up in the Wall Street Journal.  They are taught to say no first to avoid bad press, rather than try to create solutions that may be controversial or lead to operating in legal grey areas.   Every employee at traditional banks, brokerage firms and asset management firms go through extensive compliance and legal training to ensure that they don’t misstep, or poke the bear. The fear of the SEC and other regulators is instilled from the onset of a traditional finance career.
But most digital asset firms were built by FinTech executives, which have a reputation for “work fast and break things”... an approach that to date hasn’t been very effective in regulated finance.  And most digital asset participants are retail investors, which often includes high net worth celebrities with loud and public voices on social media.  While there have always been disagreements between regulators and those being regulated, the digital assets industry is the first in recent memory to openly, publicly and frequently call out regulators for hypocrisy and wrongdoings.  And this attitude is not limited to digital assets and the SEC - we are seeing more and more aggressive and public stances against banks, brokerages, money transfer companies, the Federal Reserve, Congress, and every large, legacy institution supposedly “safe-guarding” our financial system.  In just the last few weeks alone:
The examples go on and on.  In fact, I categorize topics that may impact our investing decisions at Arca, or may create good discussions in future weekly blogs, and one category in my notes is titled “Fed and the SEC.”  For me to even have a category for this shows how often it comes up these days, and how relevant it probably is to the future of this asset class.
As we’ve stated in the past, most people we know are not anti-government or anti-regulators.  Most of us want to see improvements, and are willing to work with regulators to achieve this.  Similarly, most regulators we speak to are doing their jobs exactly as you’d want them to do -- they are educating themselves, speaking to industry participants, and are trying to figure out what parts of this ecosystem are already adequately covered by existing frameworks versus which parts need entirely new frameworks altogether.  They seem to be taking their time to ensure that they don’t get it wrong or hastily rush out policies that will be too restrictive, or obsolete.
But this methodical slow-playing has consequences too, as it leads to unrest.  The digital assets industry keeps growing, leading to more political lobbying efforts and rising legal coffers with which to fight. These efforts to fight/determine regulation are going to be made out in the open, where companies are hoping the court of public appeal will likely prove more influential than judicial courts.
What’s Driving Token Prices?
What We’re Reading This Week
SEC Threatened to Sue Coinbase Over Lending Product, CEO Says
Brian Armstrong Responds to SEC Threats to Shut Down Coinbase Yield Product
NBA’s Steph Curry Seals FTX Crypto Pact Similar to Tom Brady’s
Mastercard Makes a Big Bet on Crypto, Buying Blockchain Analytics Start-up CipherTrace
Ukraine Has Legalized Bitcoin
And That’s Our Two Satoshis!
Thanks for reading everyone!
Questions or comments, just let us know.
The Arca Portfolio Management Team
Jeff Dorman, CFA - Chief Investment Officer
Katie Talati - Head of Research
Hassan Bassiri, CFA - PM / Analyst
Sasha Fleyshman -  PM, Special Situations
Wes Hansen -  Head of Trading & Operations
Alex Woodard- Analyst
Mike Geraci- Trader
Kyle Doane- Trader Operations Associate
Nick Hotz- Analyst
Andrew Stein- VP of Research
To learn more or talk to us about investing in digital assets and cryptocurrency
call us now at (424) 289-8068.
'

The Good, Bad & Ugly of Voluntary Reporting and Transparency

Let’s Have a Rational Conversation about NFTs