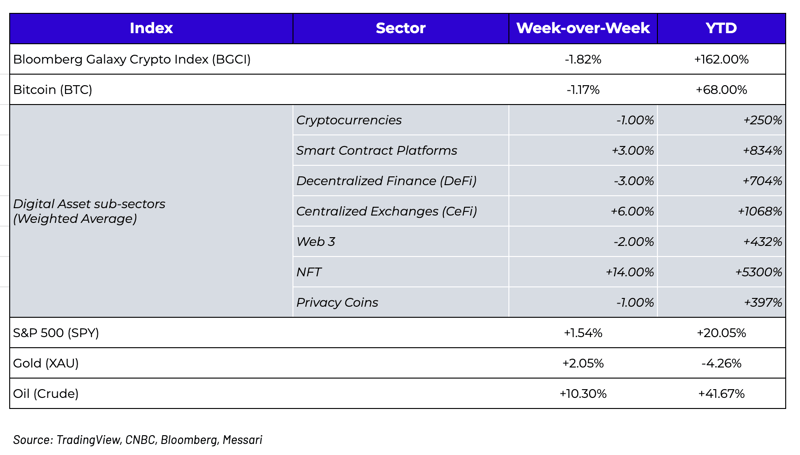 A Quiet Week Ahead of a Possible Storm
The broader digital assets market was fairly quiet last week, with most sectors trading sideways.  We continue to see outperformance from Solana (SOL) and its ecosystem, as well as continued strength in NFT/Gaming tokens, offset by weakness in ETH, DeFi and Bitcoin. That said, the week ended with what may be a perfect setup for a Bitcoin rally into month-end.
First, the large August options expiry for Bitcoin and Ethereum came and went, without the ensuing volatility crash that typically follows large expiries.  Historically, Bitcoin call sellers rush to put new positions back on after the roll, but last week, we saw more buyers of Bitcoin calls rush in.  Second, the macro setup is favorable:
But that’s next week’s story.  For now, the focus of digital asset investors continues to be on NFTs and gaming, and on Ethereum competitors that may facilitate the next wave of digital assets adoption.
Everyone Understands NFTs -- Most Just Don’t Want to Admit it
There are plenty of concepts within the digital assets industry that are difficult to understand. The technology behind the blockchain itself takes time to fully grasp.  The trustless nature of DeFi and Web 3.0 is challenging conceptually.  Even the rationale behind why Bitcoin has value is a complete leap of faith.  As such, it makes perfect sense why this industry can be so polarizing at times.
But NFTs make sense to everyone… most just aren't ready to admit it yet because it's psychologically difficult to watch others make money hand-over-fist and not be skeptical.
I’ll preface this by saying that I’m the least tech-savvy person on the entire Arca portfolio team, and the least interested in collectibles and games.  If you’re interested in an in-depth conversation about specific NFT projects, or games utilizing NFTs, or the technology and platform powering NFTs… we have a whole team and countless resources that can be made available to you. But this analysis comes directly from me -- a layman, speaking entirely in layman’s terms.
Conceptually, if you’ve ever...
Now, that does not necessarily mean that you can assign an appropriate value to any specific NFT, or that you won’t be stupefied by the astonishing price tag of some NFTs… but you do understand them.  Scarcity, status quo, unique data and entertainment have value.  That value is opaque -- it is worth more to some than to others - but it has undeniable value.  Meltem Demirors at CoinShares wrote the most succinct summary of NFTs yet, comparing NFTs to every other form of undeniable yet unquantifiable value creation.
Let’s start with art and collectibles.  The story of the week came from Visa, which bought a CryptoPunk NFT for $150K, while Budweiser bought a beer-themed NFT and several ENS domains.  Steph Curry bought a Bored Ape, Odell Beckham Jr and many other celebrities have also bought Cryptopunks recently.  This isn’t news because rich people and companies bought something stupid and expensive… this is news because what is now expensive and valuable was available to EVERYONE before it became expensive and valuable.  No one cares when a rich person buys a fancy car, or an expensive house, or a rare piece of art that is out of reach for most members of society.  But if anyone could have had these same items for $20 before said rich person paid an absurd amount for it, it triggers an emotional response.  That’s the only reason NFTs are such a hot topic.  People are getting rich by starting with very little, often for doing nothing other than being early, having fun, and spreading their bets.
According to Larva Labs (the creators of CryptoPunks), lifetime sales of CryptoPunks have totaled over $1 billion.  Leading NFT marketplace, OpenSea, has done $2.3 billion of volume this month alone. Leading NFT game, Axie Infinity, did more revenue in July than the entire Las Vegas Strip. The growth of this industry is staggering. 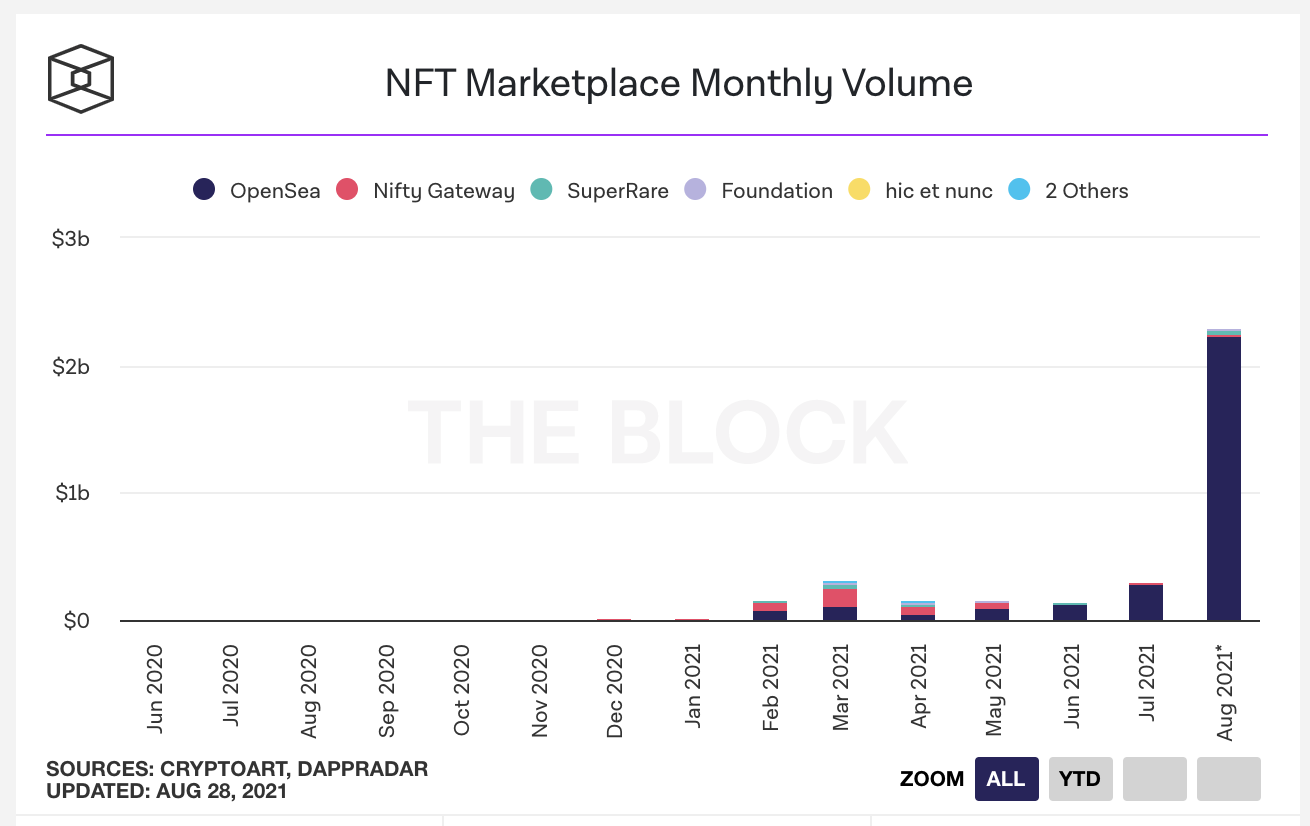 
But there’s another aspect of NFTs that don’t show up in a graph or a table.  It’s just flat out fun as hell to buy and sell these items.  I personally own a ton of baseball cards from the 1970s-2000s that sit in a shoe box.  Some may be valuable, most definitely are not.  I open that shoe box once per … I never open that shoe box.  Why would I?  No one can see them if I do.  But I check my OpenSea account roughly 3x per day, and send links to my assets to people all the time.   I own a Fluf world 3D animated Rabbit, I own a Lazy Lion, I own a Spunk, Meebit, and a bonsai tree.  I even bought my wife a Justin Maller digital art NFT for her birthday, much to her dismay and confusion, which is probably the 18th worst present I’ve ever bought for her, but we still get a kick out of confusing others when we show them her gift.  I used to go to the Kentucky Derby fantasizing about owning a horse instead of drinking Mint Juleps in the infield… now I can own my own digital horse, breed it, and race it in any horse race any time, around the world.  I put zero time or effort into what I’m doing… it’s just fun.
Some of these NFTs could make me a profit.  Some are purely hilarious.  Some I’ve grown an emotional attachment to and anxiously await being able to use them in a game, or in a metaverse.  I love when new NFT projects are created and new NFTs are minted, and I find out what random asset I ended up with just like when you open a pack of basketball cards hoping there’s a Giannis or Lebron in there.  And unlike baseball cards, or fancy watches, or expensive purses … these digital assets have much greater utility.  They can be shown off to anyone instantaneously on their phone, computer or via social media, rather than just to a select few in personal gatherings. They can be fractionalized, allowing a like-minded group to enjoy shared ownership.  And more importantly, they can be used as collateral on-chain in DeFi.  For anyone who has recently bought a house or taken out a loan, you know how absurd it is trying to prove your income and asset coverage using archaic processes like credit checks and employment letters -- now, your assets are marked-to-market and can be utilized immediately without subjectivity.
Sure, there are flaws too.  There is a lot of washed trading happening in an effort to set floor prices higher.  There are bugs and flaws in the auction processes.  The fees are egregious to mint, send and transact.  And there is definitely a euphoria that leads to rampant speculation and “get rich quick” mentalities that are unlikely to succeed. But this is no different than other forms of entertainment.  Buying and selling tickets to a Yankees game on Stubhub carries high fees, can be buggy, carries speculation risk, and the end product is just a bunch of grownups in pajamas hitting a ball with a stick.  We do a lot of stupid things in society.
The Visa Cryptopunk purchase may have been a marketing gimmick (and a very good one).  But it’s just another example on a growing list of this grassroots industry crossing over to the mainstream.  And it’s just the beginning.  NFTs will expand beyond current use cases such as collectibles, art and gaming into more traditional use cases like KYC, asset-backed loans (i.e. putting the value of your house/car on-chain to collateralize a loan), and fractional ownership of specific properties.  Your social security number will be an NFT soon.  Your health records will be an NFT.  Your Sunday magazine coupons will be an NFT.   Your favorite music will be an NFT.  We’re just scratching the surface of where NFT usage is headed.
But for now -- stop pretending you don’t understand it.  Just admit that you’re frustrated by it, or think it’s silly… and buy one (not at all financial advice -- far from it).
What’s Driving Token Prices?
Gaming and NFTs dominated price action last week, as thematic investing continues to resonate with the market. A handful of gaming tokens representing the space outperformed, with Sandbox (SAND +60%), and Decentraland (MANA +15%) leading the way.  Elsewhere:
What We’re Reading This Week

Deloitte Survey: Crypto Will Rival or Replace Fiat Within 10 Years