What happened this week in the Digital Assets market
Week-over-Week Price Changes (as of Sunday, 10/24/21) 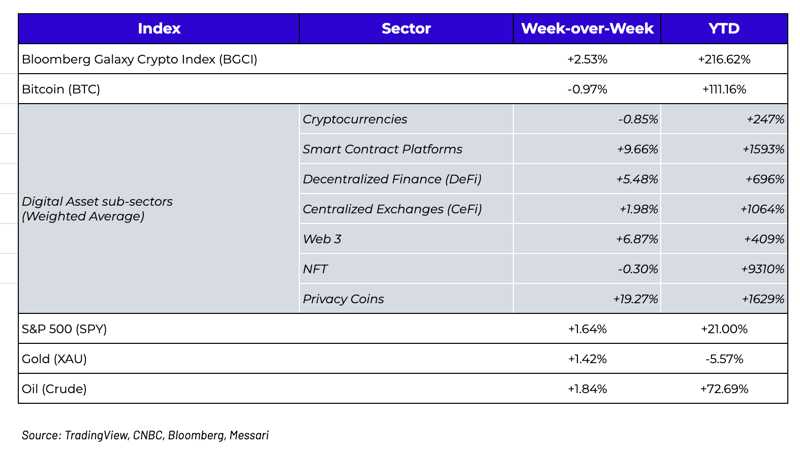 Is Inflation or the Bitcoin ETF driving prices?
The SEC approved the first futures-based bitcoin ETF, propelling Bitcoin to an all-time record just north of $67k on Wednesday before losing steam and ultimately ending the week down 1%.  The ProShares Bitcoin Strategy ETF (BITO), which gains exposure to Bitcoin through futures contracts on the CME (and all of its flaws), saw near-record volumes and asset growth.  The fund has raised $1.2 billion in assets thus far, and seems to be on pace to do exactly what the GLD ETF did for Gold.   It’s worth noting that almost all of the ETF demand has been via small trades, not large chunky blocks that are more typical for institutions, which would indicate that most of this new demand is coming from retail investors.  This is both surprising and not surprising.  The ETF was supposed to open up a new channel of institutional demand from those previously shut out of the market, but instead, it appears that the over-saturation of Bitcoin products in the last few years may have already met the demand. My best guess is that most of the demand for the new ETF is coming from investors who already own Bitcoin in some fashion, but may have excess cash sitting in brokerage accounts sitting idle, and pouring it into this ETF is easier than transferring it to Coinbase or elsewhere.

Source: NYDIG
While the Bitcoin ETF gets the credit for Bitcoin’s 40%+ increase MTD, it may not actually be the cause of the rising demand.  While Bitcoin correlations are almost always changing, it’s hard not to notice what else has happened this month:

Source: Twitter
It’s been exactly 18 months since Paul Tudor Jones famously released his inflation thesis, which included for the first time a recommendation for owning Bitcoin (as one of many inflation-based trades). Just last week, Tudor Jones said inflation could be worse than feared, that it is the biggest threat to markets and society, and that it is time to double-down on hedges.  Like PTJ, other fund managers have found plenty of ways to play the inflation trade:
These trades largely failed during the 2Q and 3Q when the market began to believe Fed Chairman Powell’s “transitory” thesis.  But in the past few weeks, the market has begun to express concerns that inflation is far from transitory.  These renewed inflation fears are resulting in futures markets predicting Fed rate hikes with 95% certainty that the Fed will be forced to hike twice next year. 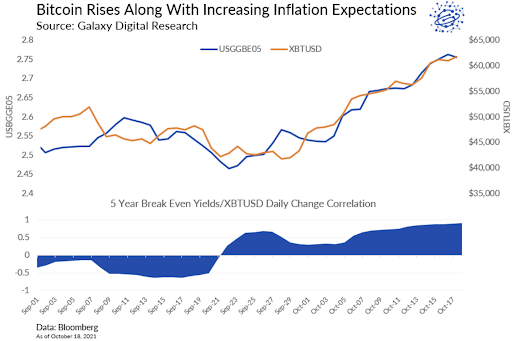