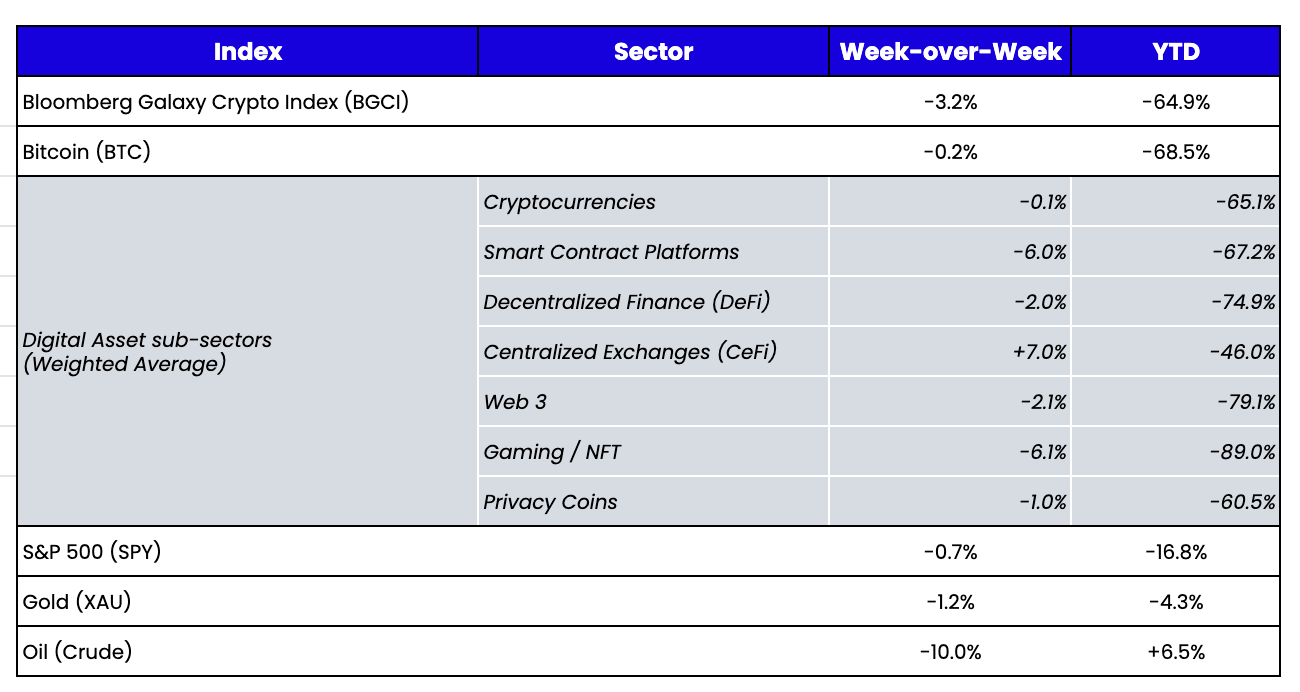 Source: TradingView, CNBC, Bloomberg, Messari
No One—and Everyone—Saw It Coming
The digital assets market is reeling right now, although prices of digital assets themselves are holding on relatively well despite the recent string of bad news. Some of the largest service providers in the industry are either restructuring or heading that way. Many retail investors have their money trapped or liquidated, while some institutional funds are unwinding. Reporters are out for blood, and the “I told you so” crowd is louder than ever. The rumor mill is nonstop, and even without merit, you’d be foolish not to at least take each rumor seriously enough to investigate. And as often is the case when an extreme event happens, many are trying to make heroes out of the few who saw these events coming.
But that last point is tricky—who really saw it coming? There are only a handful of publicly traded companies in this young industry with transparent financials and a growing yet small list of successful, transparent, decentralized protocols. But the industry is still dominated by large, centralized companies. Almost all the problem children in this market have been private, centralized companies with human decision-makers acting fraudulently or, at best, had opaque (if not purposefully hidden) private balance sheets and corporate structures. So even if you “saw it coming,” did you really?

We wrote this in late 2020 regarding FTX and Alameda:

“Prior to launching FTX, Bankman-Fried also started Alameda Research, one of the premier liquidity providers (market makers) in the digital assets industry. The potential conflicts of interest and embedded risks are large when a digital assets exchange also acts as the largest market maker and the product creator of innovative futures and index products. With a complex corporate structure, Bankman-Fried’s wallets could be tied to a number of activities taken on by FTX and/or Alameda.”

And we wrote this regarding BlockFi and Grayscale in early 2021:

“You can sign up for a BlockFi account in seconds to earn interest on your Bitcoin with ‘no hidden fees,’ and they now have 225,000 clients who have deposited over $10 billion in assets on their platform. Presumably, that means you deposit Bitcoin, BlockFi pays you a yield, and they must be lending that Bitcoin out 1-for-1 to others who want to borrow Bitcoin at a higher rate—a simple Net Interest Margin (NIM) business right? There’s certainly nothing on the website that indicates anything differently, or anything that suggests there may be hidden risks involved in this process. Then again, you may wonder why a company in such a simple business line that should be immediately profitable has needed to raise over $500 million since inception from investors, and is, according to a Coindesk interview, just now ‘operating profitably for several months.’ Here’s a riddle: What’s a bank called that isn’t actually a bank and doesn’t offer FDIC protection? Answer: A secretive hedge fund.”

“… recently some of their practices have come under the microscope. The dirty secret is that there really isn’t that much demand to borrow Bitcoin. Plenty of customers want to earn a yield by lending their Bitcoin—but very few need or want to pay money to borrow Bitcoin. Most of the interest to borrow digital assets comes in the form of US-dollar stablecoins and ETH. As a result, you now have a very lopsided asset/liability mismatch (people lend BTC, but borrow USDT, USDC and ETH), and this mismatch needs to be managed very carefully to ensure that all interest can be paid and all principal can be repaid. Anyone who has seen BlockFi’s external capital raising deck has known for a long time that some of that yield shortfall has been filled using risky practices, including the very same Grayscale (GBTC) arb trade mentioned above that used to be a cash cow (when GBTC was trading at a large premium), but just recently started to become a loss leader (with GBTC at a steep discount to NAV). This didn’t become broad public knowledge though until BlockFi’s Form 13G was filed at the end of last year, showcasing that of BlockFi’s $10 billion in customer deposits, over $1 billion of this was invested into GBTC (BlockFi is the 2nd largest holder of GBTC).”

Source: Coinglass
Where Do We Go From Here?
That’s the billion-dollar question. The perception of digital assets as an investable asset class has always been polarizing. Now, the chasm between those willing to double down in support and those throwing in the towel will only grow deeper. We'll likely see many investors that are shutting down start to distance themselves from blockchain’s future prospects, while others who are still in business will reiterate its potential. For example, one goodbye letter from a shuttering fund-of-funds remains pretty optimistic about the long-term future (albeit very skeptical about the near-term fundraising and allocations). Meanwhile, Fidelity Digital Assets and Galaxy Digital hosted conference calls this past week for investors; according to sources familiar with the calls, both had more participants than at any point during the bull market. Bifurcation is coming fast.
In terms of markets, this is much tougher to assess. As we wrote last week, the zookeepers’ problems shouldn’t implicate the animals. Many protocols and tokens are unaffected and thriving due to the sharp increases in trading volumes and the flight from centralized exchanges to DeFi. Long-term, fundamental investing processes will likely yield strong returns in some assets that live to see the other side of this fallout. But structurally, it’s challenging to figure out where the next forced seller or incremental buyer may emerge. Moreover, while the news of the collapse of FTX is empowering digital assets skeptics, we will once again point out that all of the recent collapses in the blockchain ecosystem have been from centralized players and not decentralized protocols. While that sounds like an excuse from a crypto insider, a recent JP Morgan report echoed the sentiment. It is critical to recognize this difference.
Terra Luna was a crypto failure. It was an experimental yet transparent project that buckled under its own weight due to an unsustainable design.
But FTX, Alameda, Gemini, Celsius, Three Arrows, Genesis, BlockFi, Voyageur, Babel, and many more were all finance failures, independent of the assets being financed. Fraud and leverage could (and will) happen again in any aspect of the financial world as long as there are companies that can skirt regulations and condone reckless behavior.
Clarifying the distinctions between the solutions and the problems will be the most important fight going forward to separate bad players from good assets and technology.
And That’s Our Two Satoshis!
Thanks for reading everyone!
Questions or comments, just let us know.
The Arca Portfolio Management Team
Jeff Dorman, CFA - Chief Investment Officer
Katie Talati - Director of Research
Hassan Bassiri, CFA - Portfolio Manager
Sasha Fleyshman - Portfolio Manager
Nick Hotz, CFA - Vice President, Research
Alex Woodard - Research Analyst
Bodhi Pinker- Research Analyst
Wes Hansen - Director of Trading & Operations
Kyle Doane - Trader
David Nage - Principal, Venture Investing
Michael Dershewitz - Principal, Venture Investing
Michal Benedykcinski - Research Analyst
Andrew Masotti - Trading Operations
Topher Macpherson - Trading Operations
To learn more or talk to us about investing in digital assets and cryptocurrency
call us now at (424) 289-8068.