Written by Jeff Dorman, CFA
Oct 12, 2020
What happened this week in the Digital Assets markets?
Week-over-Week Price Changes (as of Sunday, 10/11/20)
Source: TradingView, CNBC, Bloomberg
When Bad News Doesn’t Matter -- Good News Does
During the previous three weeks, risk assets have basically traded sideways, leaving short sellers in disbelief as one piece of bad news after another was simply shrugged off. Trump has Covid? Stimulus dead? Digital asset exchanges and derivatives coming under increased pressure from regulators? Yawn. When bad news no longer matters, the question becomes “what exactly will it take for markets to go higher”? Last week we found out… not much.

Bitcoin and digital assets rose 6% week-over-week, largely on the heels of mildly positive news when Jack Dorsey announced that Square (SQ) bought $50 million worth of Bitcoin in its corporate Treasury, becoming the second non-digital asset native public company to do so, and leading to a new narrative watch (more on this later).   Meanwhile, the driver behind the equity-market strength (and subsequent selloff in Treasuries) apparently was greater confidence in a Democratic sweep, removing some of the uncertainty overhang that has weighed down markets, coupled with increased optimism that another stimulus package will eventually be passed despite the shaky negotiations.
In a year where almost no one has correctly predicted the future, it’s of little comfort that Wall Street analysts and strategists are now racing to release estimates on something that they historically never get right -- politics and macro earnings forecasts.
Goldman Sachs Offers a Useless and Baseless Forecast 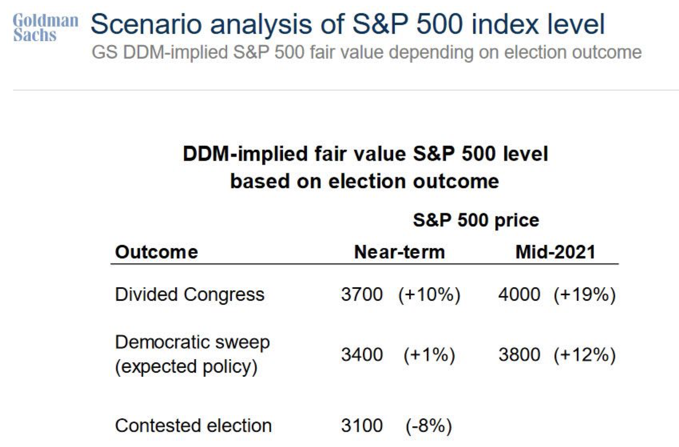 Source: Goldman Sachs
The simplest answer is usually the right one. Sometimes markets just want to go higher.
Is Jack Dorsey’s Bitcoin Announcement Relevant?
Jack Dorsey has been one of the more vocal advocates of Bitcoin, on many occasions discussing that the internet needs its own native currency. His own Twitter profile only says one word, “bitcoin”. But Dorsey also runs two public companies (Square and Twitter), which have a combined corporate Cash balance of just over $10 billion, one of which (Square) directly profits off of Bitcoin’s growth (via Square Crypto). Clearly a $50 million investment by itself is not that material or even surprising. 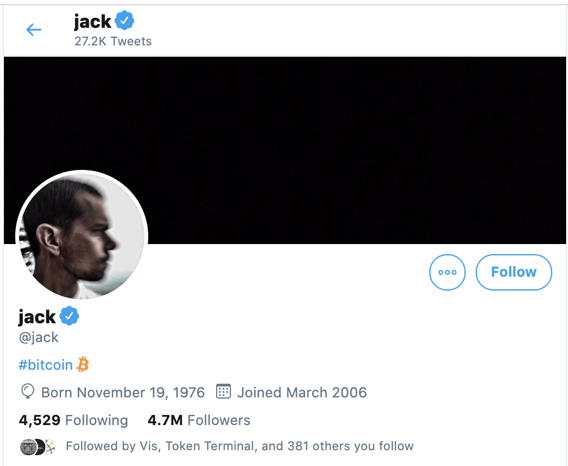 Source: Twitter
However, there is more to this story than the investment itself. First, it furthers the argument that Bitcoin doesn’t fit neatly into a singular investment thesis.   Last month we discussed how many different types of buyers Bitcoin has, including corporate Treasury departments. 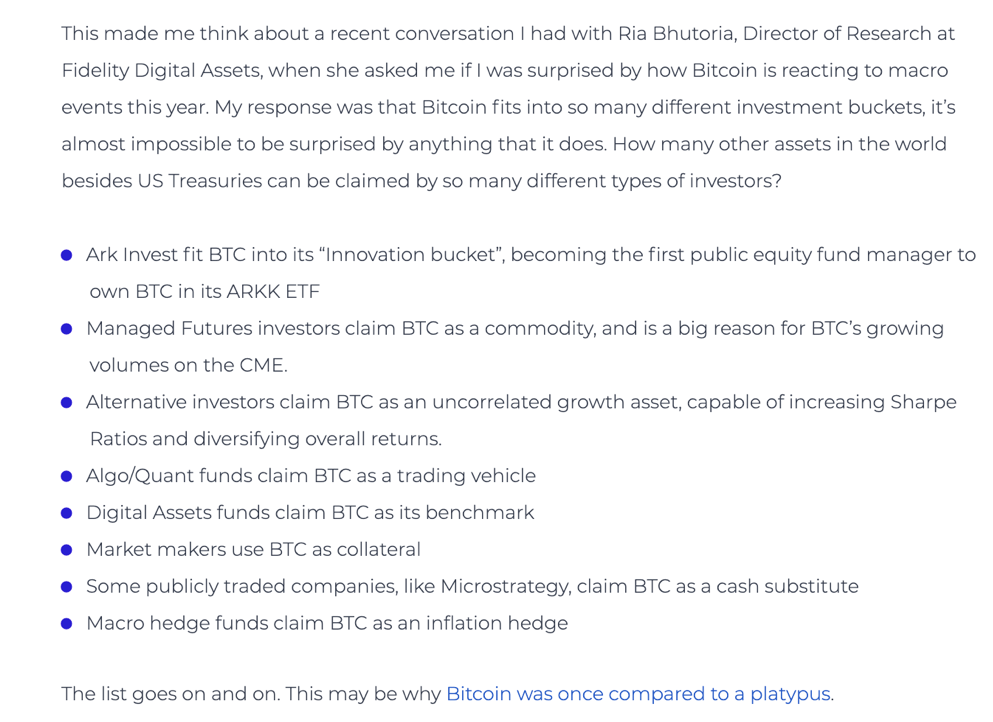 Source: Arca blog 9/14/20
But even within this singular corporate Treasury buyer base, the rationale for owning Bitcoin differs. Once again, our friend Ria Bhutoria from Fidelity Digital Assets nails this subtle nuance. 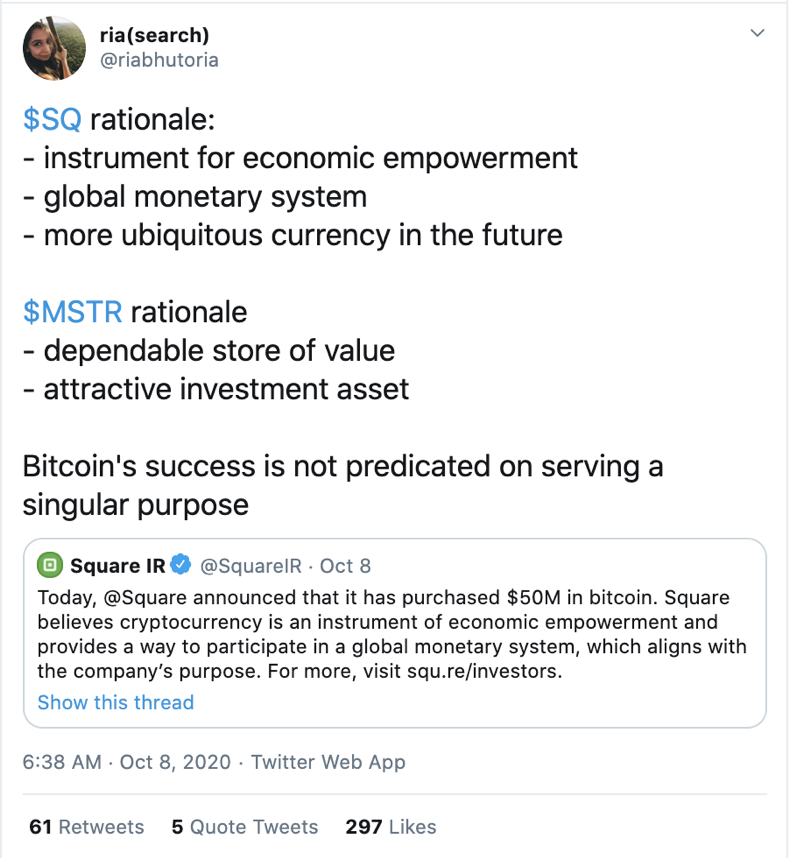 Source: Twitter/@riabhutoria
Second, CFOs around the world were already forced to think more seriously about Bitcoin after watching Microstrategy’s (MSTR) stock surge upon announcing its own Bitcoin Treasury purchasing plan. This week, Dorsey and Square put even more pressure on corporate Treasury departments by not only announcing their purchases, but revealing the blueprint for how they did it to help empower other companies to do the same thing. Now, let’s be clear: the goal of a corporate Treasury department is not to speculate or invest, and these two companies may be the exceptions, not the rule. That said, these days it’s hard to say what constitutes an investment versus simple prudence amidst the greatest monetary experiment in human history. With trillions of dollars (and rising) sitting on corporate balance sheets, all of a sudden Bitcoin’s $200 billion market capitalization seems awfully pedestrian.
As we said at the jump, sometimes markets just want to go higher, especially when the backdrop for institutional adoption of Bitcoin has never been stronger.
When Transparency Meets Lack of Transparency Head-On
Lost in the Bitcoin news last week was the strength in pass-through tokens (those tokens that exhibit hybrid equity/utility like features). While some tokens, especially in the volatile Decentralized Finance (DeFi) sector, continued to decline from record highs, others bounced back to the tune of 10-20% weekly gains. However, one trade(r) in particular stole the market’s attention.
By way of background, FTX is a growing digital assets exchange founded and run by former Jane Street alum Sam Bankman-Fried. It has been one of the industry’s top success stories, rising from obscurity to market darling over the last 12 months. Prior to launching FTX, Bankman-Fried also started Alameda Research, one of the premier liquidity providers (market-makers) in the digital assets industry. The potential conflicts of interest and embedded risks are large when a digital assets exchange also acts as the largest market maker, and the product creator of innovative futures and index products.
On one hand, there are no Reg FD reporting requirements in the digital assets industry, which can create a potential asymmetry of information flow. On the other hand, many companies and their management (like Bankman-Fried) take it upon themselves to provide incredibly high levels of transparency (something with which Arca feels very strongly about). But in the instances when actions aren’t self-reported, the inherent public transparency of DeFi and blockchain transactions combined with a few savvy Twitter detectives make it difficult to hide anything.
This past week, Bankman-Fried came under fire for using large quantities of his own native token (FTT) as collateral on DeFi platforms to borrow large quantities of other DeFi tokens in order to sell them short. These actions were not reported, but quickly discovered (see here and here) due to the visibility of public blockchains and tracking of wallets. With a complex corporate structure, Bankman-Fried’s wallets could be tied to a number of activities taken on by FTX and/or Alameda. It’s possible that these tokens were borrowed in order to short as a hedge for market making purposes, or as a way to beta-hedge its index products, or perhaps the detectives were right and this was an outright naked short. Regardless, this is no different than the complex trading relationships exhibited every day on Wall Street between prop and flow desks (see “Sachs, Goldman” or “Morgan, JP”). And while Reg FD helps us learn what these behemoths are doing after the fact, blockchain allows us to see it in real-time, as long as you know where to look.
This is the battle with that asset managers and investors will face as they enter the digital assets world. Which is better?   Forced veiled transparency from large Wall Street banks months after their (often nefarious) actions take place, or public pressure to provide full transparency because you know your actions will be discovered anyway?
We prefer to err on the side of public data and believe that, ultimately, Reg FD won’t matter as everything is out in the open anyway.
What’s Driving Token Prices?
On the heels of Square announcing their Bitcoin purchase, the market saw Bitcoin have its best week since July (+6.5%, BTC.D +1%). This week gave rise to two notable sector movements - one reactionary and one progressively:
What We’re Reading this Week
Jack Dorsey’s Square Purchases $50 million Worth of Bitcoin
UK’s FCA Bans the Sale of Crypto-derivatives to Retail Consumers
Fidelity, Vanguard, Schwab Funds Have Been Loading Up on Crypto Mining Stocks
Thailand's Central Bank Issues $1.6 billion Worth of Government Bonds on IBM Blockchain
China’s Central Bank Transacts $160 Million in Digital Yuan
US Attorney General Lays Out Plan to Crack Down on Crypto

Rational Responses to News Indicate Maturation of an Asset Class

The Magic Word is “Uncertainty”