Written by Jeff Dorman, CFA
Aug 5, 2019
What happened this week in the Crypto markets?
The Macro Backdrop is Getting Worse -- and it’s Better for Bitcoin
Global markets were volatile last week. The S&P 500 Index saw its largest weekly decline since December 2018 following the much-anticipated Fed meeting.  The 25 bps cut was of course expected, as was the language, leaving the door open for additional rate cuts with the Fed ready to act if necessary to maintain the expansion.
Fueling further volatility last week, the White House announced 10% tariffs on an additional $300 billion of Chinese goods after dissatisfaction with the degree of agricultural purchases promised by President Xi at June’s G-20 summit.  Sunday night, China fired back, asking state buyers to halt US agricultural imports. The USD/CNY has pushed above 7.0 for the first time since April 2008 -- which means China exports get cheaper and Trump gets angrier.  Further, the peaceful yet unsettling situation in Hong Kong has some speculating that the People’s Liberation Army (PLA) could enact “martial law”, effectively ending Hong Kong self rule (which has been in place since 1997).
While we often talk about the entire crypto ecosystem that has blossomed as a result of blockchain technology, most of which has nothing to do with money, currencies or macroeconomics, today we are going to focus entirely on Bitcoin.  Recall, Bitcoin was born in 2008 as a direct response to the failing banking system and uncertainty caused by overly aggressive global monetary policy decisions that were (and are still being) used to thwart off economic collapse. Last week just happened to be the first rate cut since 2008 -- a symbolic gesture if nothing else. Both US equities and Bitcoin have rallied significantly since this giant world experiment began ten years ago, proving that US central bankers and Satoshi may have both been right.
The difference of course is that the law of diminishing returns will eventually render these central bank moves worthless for risk assets, and are already having negative effects on banks (especially in Europe).  Trillions of dollars worth of negative yielding debt indicates that you can only stimulate borrowing and force purchases of risk assets for so long before people will just stop caring altogether. Lower expected rates of return on bonds also reduces the opportunity cost of holding non-income producing assets like gold and Bitcoin.  And as risk assets become less attractive, protecting purchasing power becomes the antithesis. As John Hussman points out, the expected return of traditional asset classes is as low as its been in recent history: 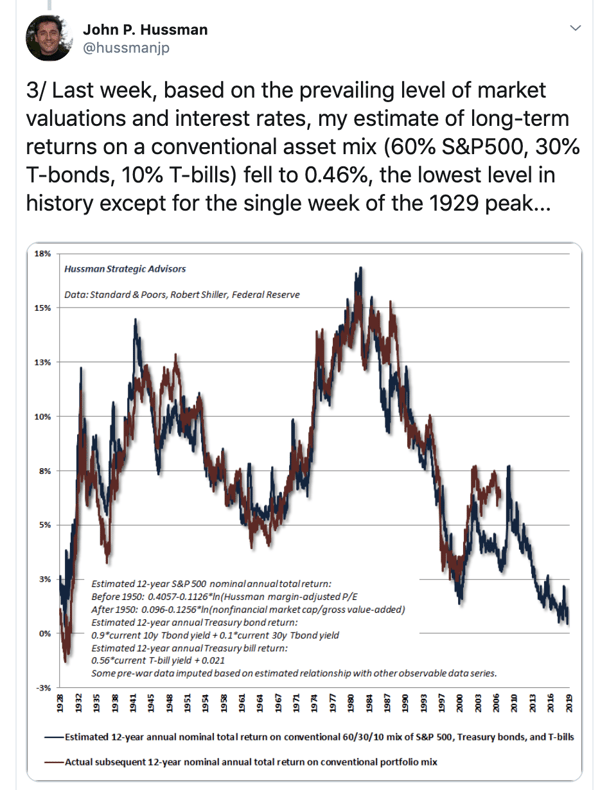 Bitcoin, meanwhile, will continue to benefit from these same economic decisions.  Bitcoin is now undeniably competing with global fiat currencies -- first as a Store of Value and one day potentially as a Medium of Exchange.  Frequent readers of “That’s Our Two Satoshis” may recall a few important tidbits that strengthen this argument:

Under normal circumstances, central bank decisions such as these are worrisome. We’re grateful to have an uncorrelated asset that acts as a hedge against this chaos.
So Why Did Bitcoin Rally 15% Last Week?
The macro forces that drove the initial rally from $3,000 to $9,000 earlier this year are all storming back, after a brief hiatus.  The trade wars are again accelerating, Hong Kong’s political instability is getting worse, and the race to the bottom for currencies around the globe has been kick-started by recent rate cuts.  Equally important, over the past 6 weeks, the insane leverage that drove unsustainable price moves from $9,000 to $14,000 and back down has been sucked out.  As a result, the market has finally become healthy enough to once again focus on the long-term bullish thesis instead of the near-term price moves.
It’s not a coincidence that stocks had one of their worst weeks of the year while Bitcoin had one of its best.  As our friend and asset allocator Nick Prince said, “If this negative correlation continues, institutions will be hard-pressed not to make an allocation.”
Instead of fighting so hard to come up with reasons why Bitcoin doesn’t make sense -- perhaps time would now be better utilized questioning what happens to the rest of your assets when debt-fueled inflation finally sets in.

As stated above, Bitcoin has been a benefactor of geopolitical tension (+15%), strengthening the claim of Bitcoin as a safe haven asset. Bitcoin dominance in turn has trended higher back to 67%, with the rest of the space trailing. There were, however,  idiosyncratic events around the space last week that led to anomalies:

What We’re Reading this Week
Overstock Issues Digital Token As Dividend to Stockholders
Overstock last week announced it would be issuing a dividend to shareholders in the form of a digital token. In recent years, Overstock has bet heavily on digital assets, with the launch of tZero and its venture arm Medici Ventures. To claim the dividend, shareholders will need to register on PRO Securities, the alternative trading system backed by tZero. We expect this to be the first in similar moves of large companies moving to digital issuance mechanisms.  We discussed a few months ago about what it will take to get investors comfortable owning securities via digitized tokens -- this is in line with those thoughts (i.e. force their hand).
Circle CEO Testifies Before Senate
Jeremy Allaire testified before the Senate last week to impress upon lawmakers the effects that lack of regulation are having on crypto businesses in the U.S. In his testimony, Allaire details how recent regulatory uncertainty has forced the firm to move its operations to Bermuda, which has a complex framework specific to digital assets. He expressed his concerns that the US  “will not be the world’s leader in this critical new technology, that it will continue to fall behind, and that it will not fully reap the benefits of the economic transformation that digital assets will bring.”
Bitcoin's Survival Is Up To Japan, Not Donald Trump
This Forbes piece explores Japan’s relationship with digital assets and how it is the only country in the G7 to embrace and regulate the space. Japan’s history with crypto has not always been smooth sailing: multiple exchange hacks over the years have resulted in billions of lost customer funds. But Japan seems willing to open its doors to innovations such as Libra and Bitcoin and create working laws around the space and encourage business within its borders. Only time will tell, but countries that successfully open their doors to digital asset innovation will reap the benefits of being the next startup epicenter. Similarly, Singapore just implemented a better tax policy for spending Crypto, effective 1/1/2020.
Philippines UnionBank Launches Stablecoin
The Philippines UnionBank launched a stablecoin, PHX, last week and conducted its first blockchain-based transaction. PHX, which is pegged to the Philippino peso and backed by reserves held at UnionBank, is accessible to all of the bank’s current account holders. As a large number of Philippinos live abroad, there is a large demand for a more efficient remittance network. This new stablecoin, in addition to a two-way virtual currency  ATM launched last year, furthers UnionBank’s digital assets strategy.
Who in Traditional Finance Is Exploring Blockchain?
Investopedia has pulled together a summary of all the large financial players in the blockchain space and what specific projects they are working on. It also covers the specific areas of traditional banking that are being disrupted by blockchain: Payments & Remittances, Account Balances & Deposits, Secondary Market Trading & Clearing, and Primary Market Issuance & IPO.