Are Crypto Investment Opportunities are Expanding? 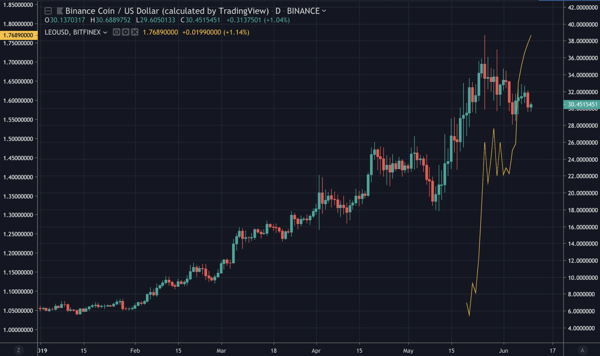 Source: TradingView
Welcome Arca’s Newest Intern - A Case Study for Modern Times
Last week, Arca welcomed its newest intern, Alex Woodard. Alex is a remarkable young student at Whitman College, studying Economics and Finance.  But Alex didn’t send resumes or cover letters. In fact, he didn’t even apply at all. We found him on Medium, writing about digital assets in his spare time. When we first reached out to Alex, we had no idea he was even a student -- we simply wanted to get to know the person who wrote succinctly about this new space, and pick his brain on his investment thoughts.

Crypto was built on open-source code, democratization, and the removal of middlemen.  It’s only fitting that crypto recruitment is open source as well. Tim McDonald said it best: “Value is signaled with deliverables and not degrees.” 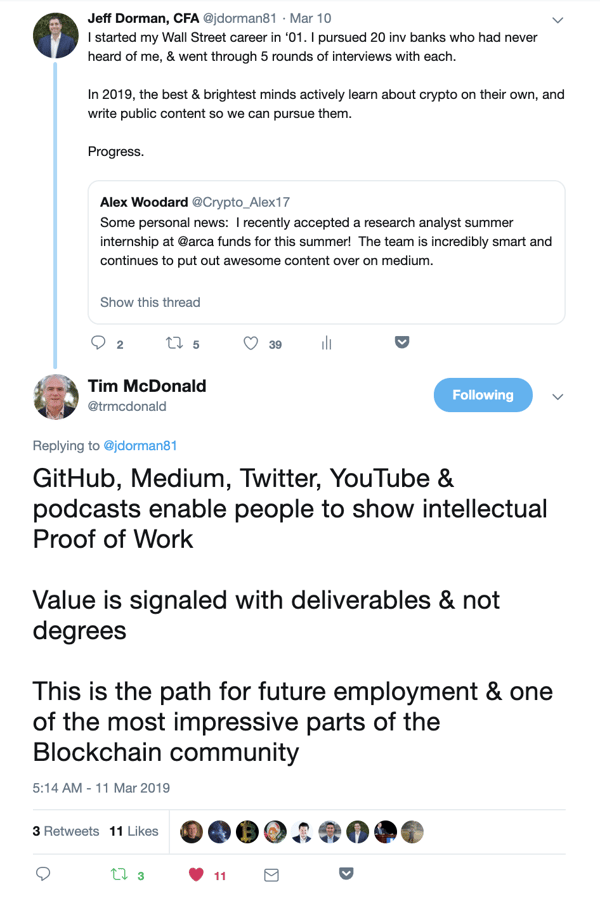 Notable Movers and Shakers
As Isaac Newton’s Third law infers, all things that go up must come down. Gravity is not escapable - not in physics, and not in the digital assets space. Since April, Bitcoin has been on a tear (+87%)  and as such it is easy to get complacent with the gains and irritable whenever those gains subside. Therefore, with Bitcoin finishing last week down 11%, it is prudent to take into account the run we have had in these last few months. That being said, there were notable outliers in this downward move that stood out:


What We’re Reading this Week
The SEC Sues Kik
The SEC is formally suing Kik for its 2017 ICO. They argue Kik’s $100m ICO was conducted as an unregistered securities offering and was done so to raise money for its business which was losing $30m a year. Kik issued a response stating that their cryptocurrency Kin is a currency and would fight the SEC in court for the benefit of all cryptocurrencies.  Arca co-founder and Chief Legal Officer, Phil Liu, has a lot of thoughts on this.
Bloomberg Terminal Lists Ethereum Based Debt Instrument
Another sign that the world of crypto is slowly seeping into traditional finance: Cadence, a blockchain-based debt instrument, was assigned a Financial Instrument Global Identifier (FIGI). FIGI records metadata in Bloomberg’s trading terminal meaning it will make it easy to research and trade Cadence. Cadence puts high yield, short-term commercial debt into ERC-20 tokens allowing investors easy and transparent access to this asset class.
Margin Lenders Lose $13.5m on Crypto Exchange Poloniex
Late last week, a severe crash in the price of the CLAM token caused margin traders to lose $13.5m. In response to the liquidations on traders accounts, Poloniex froze the accounts of the borrowers until they are able to pay back the amount owed. Poloniex explained the losses were incurred due to a combination of illiquidity in CLAM and the “velocity of the crash”.  Exchange risk remains the biggest risk to crypto investors right now, but this was just outright irresponsible. Small, illiquid tokens like CLAM should never have been available on margin in the first place.

Send Bitcoin As Easily as an Email
Startup Moneybutton launched a new feature last week -- Paymail, which allows users to substitute an email address for a bitcoin address. To send or receive digital assets, individuals must use a public key consisting of a long string of random numbers and letters looking something like this - 4dEICdk367mndDfu7noxk592nfdDOKue48wt. These public keys are difficult to remember and are easily mis-typed. Paymail allows senders to use an email address instead of a public key to send cryptocurrency. Though this feature has only been implemented on Bitcoin SV, this is an advancement that many argue is needed for mainstream adoption of crypto.
Star Trek on the Blockchain
The company behind the blockchain-based MLB game, Lucid Sight, just signed a deal with CBS for the rights to bring Star Trek into its gaming universe. Specifically, the U.S.S. Enterprise and other Star Trek ships will be available in Lucid Sights’s space-based multiplayer game, Crypto Space Commander (CSC). Eventually Star Trek items will be available for purchase within the CSC game.
And That’s Our Two Satoshis!
Thanks for reading everyone!
Questions or comments, just let us know.
The Arca Portfolio Management Team
Jeff Dorman, CFA - Chief Investment Officer
Katie Talati - Head of Research
Hassan Bassiri, CFA - PM / Analyst
Sasha Fleyshman -  Trader
To learn more or talk to us about investing in digital assets and cryptocurrency
call us now at (424) 289-8068.

ESPN Should Issue a Membership Token