Written by Jeff Dorman, CFA
May 13, 2019
What happened this week in the Crypto markets?
That Was Sudden
Global equity markets ran into a bit of a buzzsaw for the first time this year, after the U.S. announced it would increase tariffs from 10% to 25% on $200 billion of Chinese imports.  So naturally, Bitcoin and the rest of crypto were... +23% week-over-week? 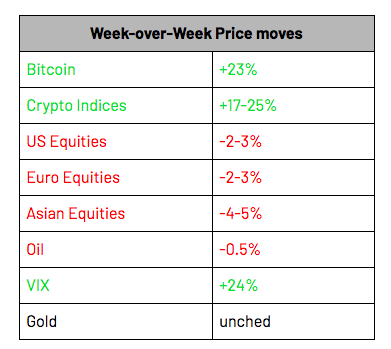 Previous Story
← Blockchain, Exchanges and Crypto Prices for March & April | Arca
Next Story
“That’s Our Two Satoshis” — Is Bitcoin a Safe-Haven Asset, a Risk-Asset or Both? →