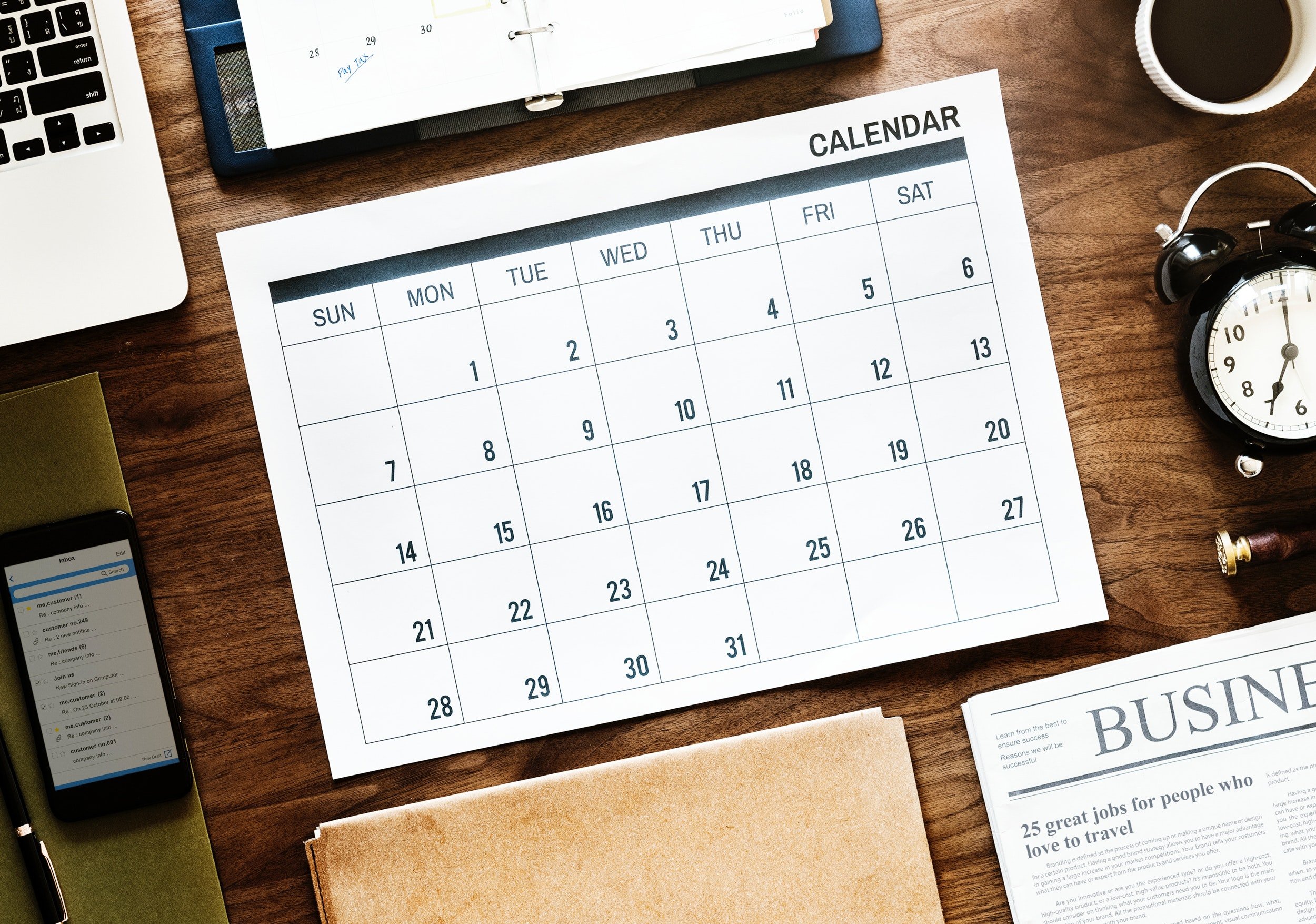 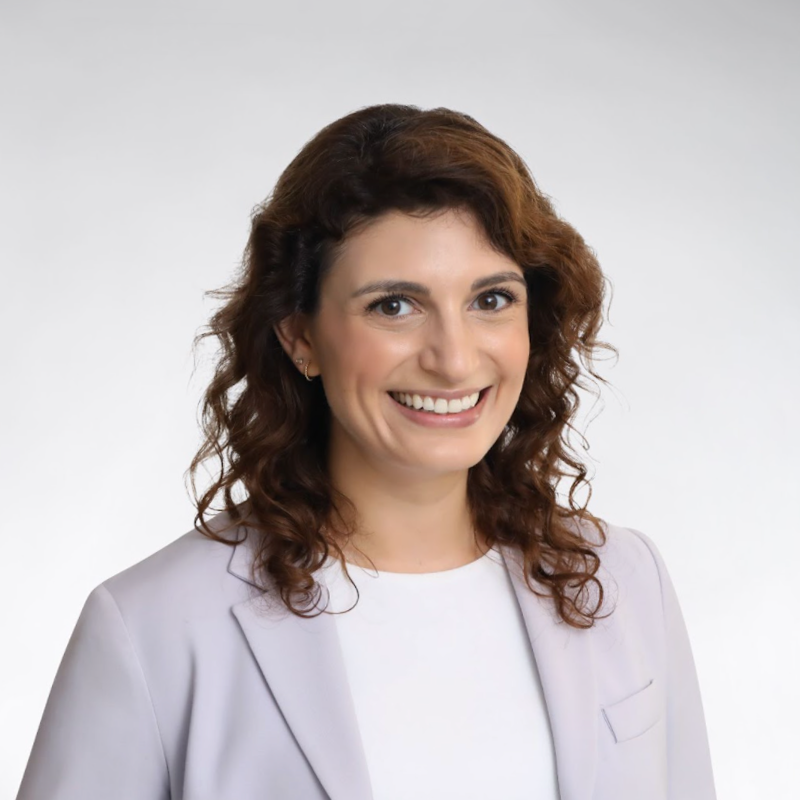 Written by Katie Talati
May 8, 2019
A Thematic Review of the Events that Drove Crypto
A note about April: due to Bitcoin’s resurgence and market dominance during the month of April, we found that the impact of event driven positions was actually muted compared to months when BTC trades flat or within a tight range. We plan to explore this at some point in the future. In the meantime here is our analysis for what worked in March.— The Arca Research Team
Piggybacking - Why Recreate the Wheel?
Blockchain projects are all based on open-source code and an open-source community ethos. Most projects and companies are therefore fairly public about the direction of their businesses and long-term vision. Indeed, we have written proof from a number of these projects on their exact milestones - whitepapers. It serves as no surprise that projects take cues from each other - they piggyback off the successes of others. We saw this happen prominently among crypto exchange tokens over the past few months.

Binance made major headlines over the last few months as it began expanding the use cases for its Binance Coin (BNB). In addition, the company launched its long-awaited Decentralized Exchange (DEX) product which was outlined in their 2017 whitepaper. BNB is one of the few tokens in existence that offers actual utility for its token:

The original Binance Whitepaper published in late 2017 promised additional token utility that would be introduced as the DEX launched and the platform grew. These additional token uses cases came to fruition in the first quarter of 2019.

In addition to increasing the number of merchants that accept Binance as a form of payment (travel operators, games, virtual goods stores), Binance also relaunched their Binance Launchpad product, a platform for token projects to raise funds in an Initial Exchange Offering (IEO), the next evolution of the ICO. Purchases of these new issuances have to be made using BNB tokens. Unlike previous ICO offerings where investors could pay primarily in BTC and ETH and projects were in charge of distributing their offering themselves, Binance took on these burdens, providing projects with distribution and offering their customers a chance to participate using their exchange token.

After completing three high-profile IEOs that sold out within minutes, Binance found another way to incentivize users and increase the demand for BNB. Instead of a “first-come, first-serve” basis, the platform chose to incorporate a lottery system in which users would receive tickets to redeem during the sale. Tickets are allocated based on the number of BNB held in a users account for the prior 20 days. These requirements further increased demand for BNB and drove up the price as users who wished to participate in the IEO were encouraged to buy and hold their tokens. By this time, BNB had returned almost 200% from the beginning of the year.

The Copycats
Binance’s tactics and distribution illustrated the exchange’s dominance and ability to pivot and create additional usage for the token within its ecosystem. Other exchanges with similar tokens would have been amiss if they did not follow Binance's lead.

Hong-Kong based exchange KuCoin, which opened operations in late 2017, issued its exchange token in September 2017, two months after Binance conducted their ICO. KuCoin Shares (KCS) offer trading discounts to users with a quarterly buy-back and burn mechanism similar to Binance’s model. Additionally, the exchange implemented “KuCoin Bonus” - a daily airdrop to users who hold KCS based on the exchange’s daily trading fees. Looking to stay apace with its competition, KuCoin announced it would launch an IEO platform on March 20. This resulted in a 54% move higher in KCS tokens, muted compared to BNB’s returns.

KCS is not an isolated case as this pattern was repeated by Huobi Token (HT), BitMax (BMT), OkEx (OKB), and Bittrex. All of these exchanges (with the exception of Bittrex which does not have its own token), are BNB copycats that launched their own versions of Initial Exchange Offering platforms to rival Binance’s. As investors watched successful tokens like BNB provide outsized returns, they continued to look within the exchange sector to find underperformers with potential. 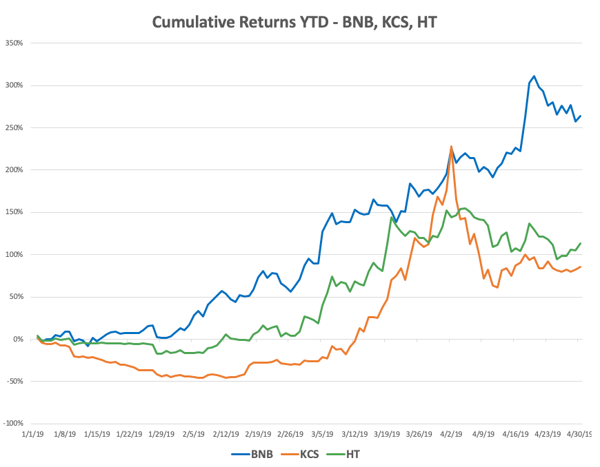 Source: CoinMarketCap. Data for BTMX and OKB were excluded as they only recently began trading.

Although many might believe that these exchanges are riding the coattails of Binance’s success, it is remarkable how these exchanges were able to pivot business models and stay agile with their product offerings. The digital assets market moves a mile a second and tokens and products that can’t keep up will be left in the dust. These exchanges stepped up in Q1 while the overall market was depressed to piggyback off another’s success and provide returns to holders.

What are your thoughts on these Initial Exchange Offerings?

Announcement About an Announcement
Crypto can be valued using fundamental analysis, but the market price of tokens day-to-day is still largely driven by community sentiment. For that reason, projects that are able to market themselves are always able to drive price appreciation for their token. The newest tactic we’ve seen emerge in the last couple months is the “announcement about an announcement”. As insipid a ploy as it is, it works. Projects tease their community of followers with lines like “big news is coming soon”, “we’re unveiling an important partnership next week”, “we have big tech updates to share with you”. Communities are often desperate for good news and will latch on to anything.

This is a new phenomenon as private and public equity markets function differently. In the public equities world, companies have to file a form 8-K when they make major announcements. In private markets, companies have nothing to gain or lose from publicly declaring anything about their progress, so more often than not they keep quiet except with regards to fundraising. Crypto projects however, are under no such regulation and can say what they like and watch as the price of their token is manipulated. The most notable example of this trend in the last few months is EOS.

EOS has had a bumpy ride since last fall with negative headline after negative headline. After a mainnet launch that was riddled with issues, the platform encountered a number of hacks, the exodus of four Block.One execs, collusion among block producers, and finally the threat that creator Dan Larimer might depart from the project. To make matters worse, the project did not issue any material updates or progress reports, only weak reassurances to the impatient community. As we’ve discussed previously, in the case of token projects, no news is bad news. 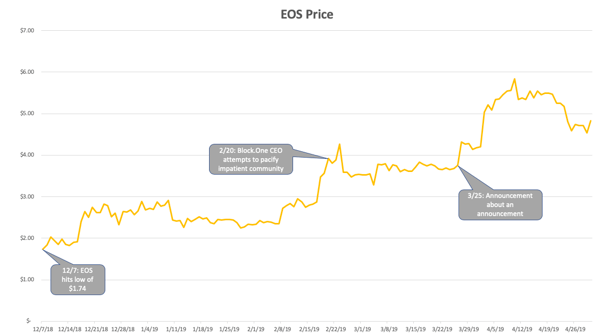 Already massively depressed following November’s self off, EOS failed to rally with the market in January and February. After hitting a low of $1.74 on December 7, many wondered if the potential Ethereum competitor might ever recover. On March 25, Dan Larimer revealed via Telegram that EOS would be making a big announcement on June 1, one that would be “ the biggest since the launch of EOSIO”. EOS went on a tear and ran up 58% over the following two weeks.

Although these gains haven’t held (after touching $5.90, the token is now trading around $5), the announcement had its intended effect. The community has been reenergized and investors are paying attention to the project again. We don’t know what will happen on June 1, but at this point it hardly matters.

As of the date of this commentary, Arca Digital Assets Fund holds positions in EOS.

This commentary is provided as general information only and is in no way intended as investment advice, investment research, a research report or a recommendation. Any decision to invest or take any other action with respect to the securities discussed in this commentary may involve risks not discussed herein and such decisions should not be based solely on the information contained in this document.