What happened this week in the Digital Assets markets 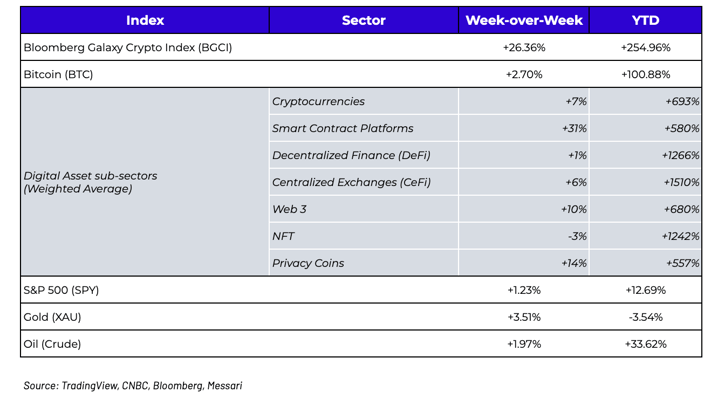 Inflation, the Economy and Rates that Can Never Actually Rise
On Tuesday, U.S. Secretary of the Treasury, Janet Yellen, spooked global markets when she indicated that rates may have to rise to keep the economy from overheating.  Stocks fell, the VIX rose, and digital assets fell… in fact the only thing that didn’t move on the big rates “news” was...rates (Treasury yields were unchanged).  Only a few days later, a sobering April jobs report came out and it was a sizable disappointment amid a recent string of encouraging data, which had been indicating that the economy was recovering nicely.  The employment data caused the 10-year Treasury yield to fall 10 basis points before recovering, but yields stayed just low enough to propel US equities to yet another new all-time-high.
This is really all you need to know about investing right now.  The market is looking for any data that gives the Fed an excuse to avoid raising rates.  The inflation signaling was viewed as a bluff, but the employment data was real.
Source: TradingView
Now, inflation itself is not a bluff.  In fact, it is top of mind.  According to the Bank of America Global Fund Manager survey, COVID-19 is now only the third-biggest 'tail risk' behind "higher than expected inflation" and "a tantrum in the bond market".  Almost 93% expect rising inflation in the next 12 months — the highest percentage of respondents to identify this as the biggest “tail risk” since May 2004. Further, the number of mentions of “inflation” during earnings calls has more than tripled year-over-year, the biggest jump since 2004.  Even Warren Buffett and Sam Zell are now ringing the inflation alarm.

Of course, the Fed itself will tell you otherwise. 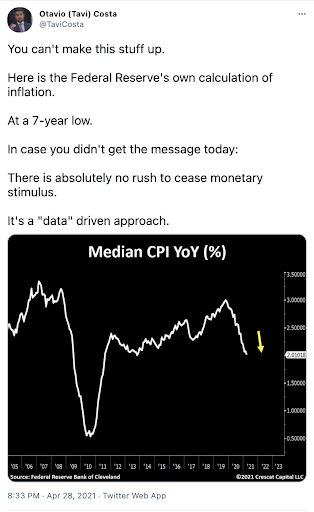 Source: Twitter / @tavicosta
And this is important. How can rates rise when every country on the planet has accumulated massive quantities of debt over the past year?  As Deutsche Bank wrote in a weekly note regarding defaults, “the only way overall levels of debt are sustainable is if government real yields stay consistently negative for multiple years or even decades.  Perhaps the most pragmatic way out is inflation plus financial repression, meaning real yields go even deeper into negative yield territory in the years ahead.” 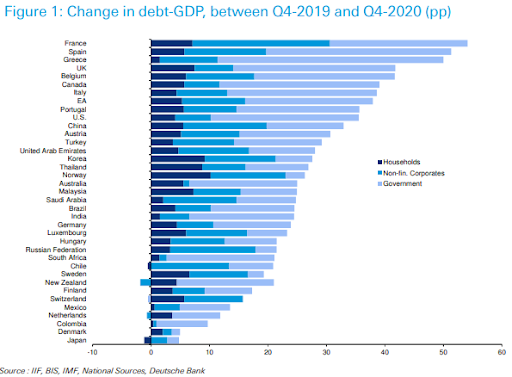 And herein lies the conundrum.  Central bankers have backed themselves into a corner, as they cannot actually raise rates in any meaningful way or this would immediately bankrupt governments around the world due to an inability to service debts. And they can’t (or won’t) acknowledge that they’ve created a monster they have no control over.
So we have real inflationary pressures, but data that says it isn’t here, which keeps the dollar and rates near all-time-lows… and you wonder why both interest and trading in Bitcoin and other digital assets is surging?
Digital Assets Trading Volumes are Surging as the Market Grows Up
And yes, we mean surging. Take any metric you’d like to show how fast this market is growing.
Trading volumes? Yep, trading of digital assets is booming even as speculative trading wears off in equities. Digital assets trading volumes on both centralized exchanges and decentralized exchanges are hitting fresh highs.
Website traffic? Yep, exchange web traffic at digital asset exchanges hit a 3-year high with 530 million visits in April, only slightly below the January 2018 all-time-high of 532 million.  Twitter followers of these exchanges also hit new all-time-highs, surpassing the 2017 peak, with a much more gradual rise this time versus the massive spike we saw four years ago.
Sentiment?  Yep, bullish Google search activity has increased for commodities and digital assets, even though it has faded for nearly everything else (including short squeezes, S&P 500 & call options). 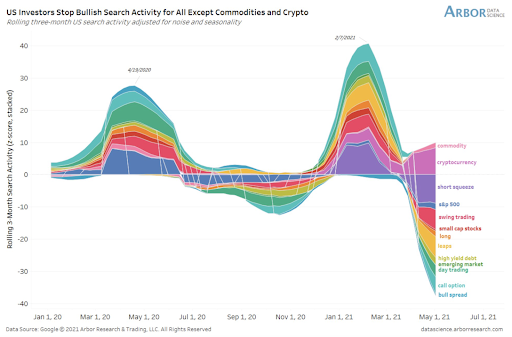 The driving force remains the wall of money from traditional finance pouring into digital assets, which is now the fastest of any asset class in the history of the world - a $2.2 trillion rally in just 14 months from barely $100 billion of total market cap last year to over $2.3 trillion today. 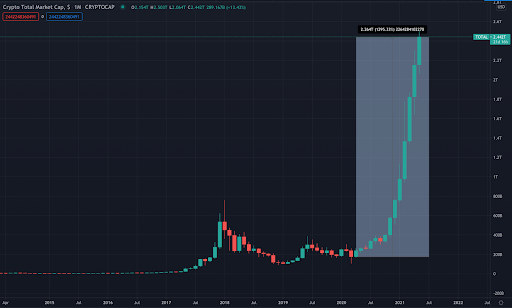 Source: QCP / TradingView
Meanwhile, digital assets haven’t so much as hiccuped even as we’ve seen a collapse of all other forms of speculation, which could be due to a massive rotation into this asset class, or simply a prelude of what is to come next for digital assets. Joe Weisenthal of Bloomberg recently wrote:

“...it really feels like crypto is draining all the speculative juice out of the market right now. It's like the gambling crowd is moving on from stocks. It's hard to prove, but you can see call option volume has significantly pulled back and is now sitting near its lowest levels of the year.  At the same time, the red-hot names from last year and early this year have gone super quiet. You hardly see anyone talking about ARKK these days. There's a bunch of other stuff like Chamath's SPACs, and Microstrategy that all kind of look similar right now.”

Naturally, we wonder if the digital assets strength will also fade like it has with other markets.  It’s certainly possible.  But on the other side of speculation and trading is a technology that is permeating every facet of global finance.  Our friend Noelle Acheson of Coindesk may have said it best:

“We have signs of a grown-up market with our first mega M&A deal (Galaxy purchasing BitGo for $1.2 billion), Goldman Sachs putting more resources into the industry and other large banks talking about crypto services. On the other hand, we have meme tokens defying gravity, cryptocurrencies that had been left for dead coming back to life, and the unleashing of what looks like another wave of innovation with the launch of a new global computing platform. Is crypto mature or is it still in diapers? The answer may be both, or it may be neither.”

The reason this is so difficult to grasp is that it is a truly worldwide phenomenon.  In traditional markets, it’s typically easy to pinpoint one or two areas where strength or weakness can be attributed, or a few trends in valuations that investors are focused on.  If stocks are slumping, perhaps US equity funds have outflows, and if tech stocks are rallying, perhaps it is due to multiple expansion.  But how do you measure a market where each new entrant offers an entirely different collection of assets to trade to an entirely different audience, with an entirely different set of valuation techniques?  In addition to market fragmentation, you also have opinion fragmentation.  Jesse Proudman of Strix Leviathan recently nailed it when talking about the divergence of opinions on what digital assets are worth:

Therefore, pockets of speculation may die down, while other pockets accelerate.  As such, the growth in the asset class will likely continue unabated.
What’s Driving Token Prices?
Retail buyers were out in full force last week.  The 2017 legacy coins came into vogue again, mainly due to exchange accessibility.  This move was a good indicator of retail sentiment as we’ve seen the rotation cycle of BTC-> ETH -> DeFi-> to legacy tokens… ETC +162%, BCH +55%, LTC +43%, BSV +15, XLM +14%, XRP +5%, EOS +64%, ADA +32%, TRX +15% and NEO +8%.  These are mostly older proof of work coins which are easily accessible to retail investors in the US via onramps like Paypal, Square, Robinhood and eToro.  These movers are indicative of the smaller playbook that retail buyers work with, who are more likely to invest within the scope of the tokens that their exchanges provide when bullish sentiment is running strong.
What We’re Reading this Week
Bank of England Begins Hiring for Central Bank Digital Currency Team
CME Group’s Micro Bitcoin Futures Open for Trading
EBay Is Exploring Ways to Enter NFT Market: CEO
Galaxy Digital to Buy BitGo in Crypto Sector’s First $1 Billion Deal
Goldman Sachs Leads Investment in Crypto Firm Coin Metrics
Square Reports $3.51 billion in Bitcoin Revenue via its Cash App for First Quarter of 2021