“That’s Our Two Satoshis” — The Bitcoin Community Should be Embarrassed

What happened this week in the Digital Assets markets 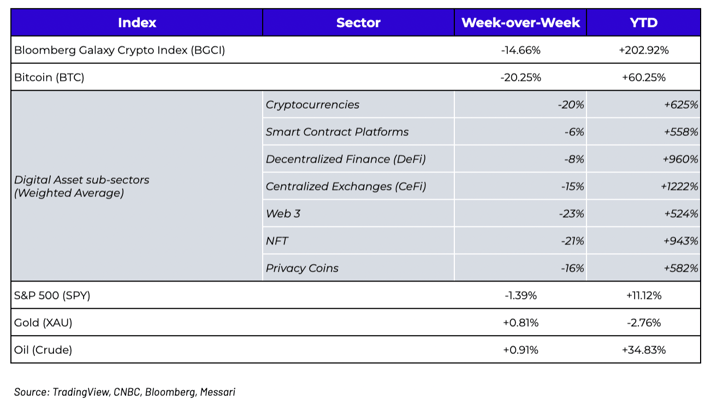 Make Sure you Glorify the Right People
There are many real reasons for the current volatility in global markets, and last week’s weakness in digital assets.  Economic data is booming, but employment data is sending mixed signals.  Inflation is here, but no one knows if it is transitory or not.  Decisions are being made because of rising rates, but nominal rates themselves aren’t actually moving.  Digital assets have been flying for months but crypto stocks are tanking.  The VIX was basically unchanged over the past eight days, but the S&P 500 suffered its worst three-day loss (Monday-Wednesday) in nearly seven months (-4%) before snapping back to recover most of the losses on Thursday and Friday.
Any of these reasons would have been enough to cause digital assets to finally crack too… but unfortunately the only factor anyone is talking about is Elon Musk, and more Elon Musk.
After reading hundreds of responses to this circus, it turns out the most prevalent and succinct came from an internal slack sent by Arca’s own CEO, Rayne Steinberg:

“The fact that this conversation around Bitcoin energy consumption is being driven by a celebrity like Elon Musk gives us more insight about our society than it does about the actual issue. Elon said Bitcoin is good and therefore it was. Now he says it is bad, so it is bad. Has the reality of the situation changed or does this illustrate the dangers of relying on the rich and famous to drive our decision-making? The energy consumption issue, like most things, is nuanced and has many factors to be considered on both sides. We feel, broadly, that when you compare the net energy consumed to what is possibly gained (a faster, more efficient and fair financial system), it’s more than a fair trade.”

He’s absolutely right.  Some view Bitcoin’s benefits positively enough to offset any negative externalities, while others do not.  Nothing has changed.  Yet at the same time, nothing really changed on the way up either when Bitcoin ran 500% from October to March. Earlier this year we illustrated how Bitcoin rallied numerous times on the same news over and over and over again, often directly due to comments from Musk himself, so it’s only natural that Bitcoin should suffer when this “news” reverses.
And the market reaction was almost perfectly rational.  The “news” (if you can even call it that) has been entirely specific to Bitcoin (and maybe a few other proof-of-work tokens), and during the first part of the week, the cryptocurrency sub-sector of the digital assets market bore the brunt of the selling.  It was only later in the week when Bitcoin’s continuous declines (now -25% month-to-date) began to finally weigh on other types of digital assets, even though they are mostly completely unaffected by any of the newfound discussions this week. Literally, as I’m typing this (at 10:56pm PST on Sunday night), Musk again single-handedly caused a $2,500 move upward in the price of Bitcoin simply by tweeting this: 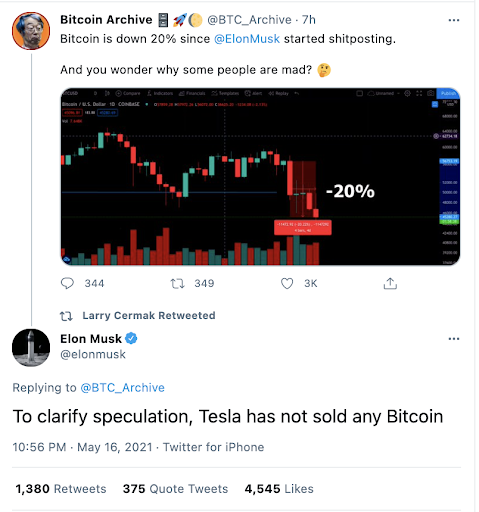 Source: Twitter / @elonmusk
This kind of price action related to a single person is embarrassing, but it’s the Bitcoin community themselves that should be the most embarrassed.  After years of building quietly as the underdog, they all chose to glorify an eccentric loudmouth over the past several months, celebrating each unnatural gain caused by repetitive "positive" news and sending out obnoxious emails/texts/tweets/newsletters about how important this was.  And now they are mad and defensive because their hero wears a black cape and the narrative has flipped.  Bitcoin’s ultimate long-term success or failure will have nothing to do with Elon Musk, but the fact that the short-term price does is a reflection of all of the insane propaganda and celebrations regarding his involvement.  The bulk of the media, the “Twitter celebrities”, and the early asset managers in this space that dedicate their livelihoods to convincing people that Bitcoin is some stand alone asset on top of the pantheon made a choice to stick with the tried and true narrative of the past 10+ years, or to make a quick buck off of Elon Musk - they chose the latter, and these actions have consequences.
If you’re a Bitcoin maximalist for reasons other than “it’s a good way to increase twitter followers via groupthink and likemindedness”, you are doing yourself a massive disservice.  You are early to a new and evolutionary technology, but you are wasting your advantage like a 6’10” person who doesn’t believe in basketball.  “Bitcoin dominance” is not a thing (by definition, the proportion of this asset class represented by Bitcoin’s market cap has to go down over time since there are infinite new tokens being created that make up the rest of the field).  Bitcoin also doesn’t “give other tokens permission” to rally, as suggested by another popular asset manager. And Bitcoin doesn’t need Elon Musk to validate it. These are tired, stale narratives and flawed metrics that have somehow become “law” for no reason, no different than old baseball stats like a pitcher’s “win”, which has now been cast aside as a meaningless measure of success but is still being used by 80-year old baseball analysts. 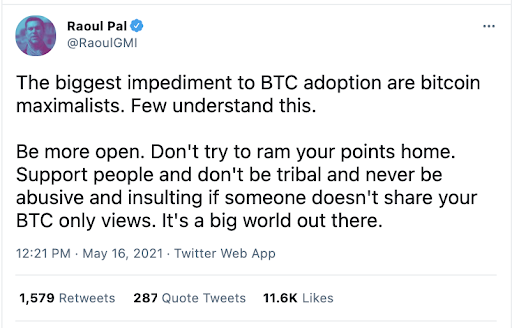 Source:  Twitter / @RaoulGMI
If not Elon Musk, Where Should You Get Information?
I honestly wouldn’t even know what Elon Musk was saying if it wasn’t for all of the questions we get about him - that’s how little I pay attention to his tweets, and the tweets of other pseudo-Bitcoin social media celebrities.  But speaking of questions, we frequently get asked “well, how can I get started learning about this industry?”  Given that “a lie can travel halfway around the world while the truth is putting on its shoes” (attributed to Mark Twain), it’s as good a time as any to show off a list of resources that I read daily and weekly to help stay on top of the most relevant information regarding digital assets. By no means is this all-inclusive, but it’s a good starting point into the world of professional investing in this asset class (Note: I read many things that are more macro-focused, but this list is exclusive to digital assets-centric information).
My daily morning routine consists of the following reading:
My weekly reading consists of the following:
Paid Research:
I also have alerts set on a few Twitter followers, to ensure that I don’t miss specific items:
What’s Driving Token Prices?
Several tokens saw new all-time-highs, only to have their legs swept out by the broader market selloff:
What We’re Reading This Week
Citi Bank is Considering Launching Crypto Trading and Custody Services
China's Digital Yuan Inches Closer to Full Rollout with AliPay, ICBC Activations
Hedge Fund Giants Millennium, Matrix and Point72 Standing Up DeFi Funds: Sources
Tether (Finally) Releases Breakdown Of Its $42 Billion In Crypto Reserves
Coinbase Reaches #1 on U.S. Apple App Store for First Time Since 2017

Previous Story
← “That’s Our Two Satoshis” — How Economic Data Affects Digital Assets
Next Story
Have You Been Taken to the Greenwash? →