Digital Assets Were on Sale but the Shelves Were Bare

Rough week for risk assets
Just a week ago we were discussing one of the craziest and swiftest selloffs we’d ever seen in digital assets, spawned as always by the unwinding of leveraged longs and a record number of forced liquidations.  That move was violent, and it was easy to put a lot of capital to work in a very short period of time, across a variety of digital assets.  Heading into the start of last week, it appeared as if digital assets were recovering as they recouped most of Saturday night’s losses throughout the first four days of the trading week. However, the market was looking for any catalyst to trigger the next wave of selling, and by Thursday night, the bears gave it another shot following President Biden’s revealed tax plan, pushing the market down violently once again.  Only this time, it was nearly impossible to buy the dip.  Not to be deterred, the bears took one last gasp Sunday morning, and we got yet another steep price markdown, but once again, if you were shopping, you’d notice there wasn’t much available for sale.
The results were the same (a steep drawdown in price), but last week’s selloff was very different than the selloff during the previous week.  Unlike a week ago when prices were down on heavy selling pressure (even if it was largely forced due to margin calls), Thursday night and Sunday morning were dealer-driven markdowns, with very little selling pressure from token holders. If anything, it was more of a buyer’s strike than a seller’s parade.  Sure, the shorts were pressing, and Bitcoin itself was easy to buy… but outside of that, there was shockingly low inventory to purchase. Dealers didn’t want to get caught short, and real sellers were sitting on the sidelines doing nothing.  Any buyers looking to put money to work outside of Bitcoin were essentially bidding into a offer-less vacuum.
These types of fake selloffs happen all the time in other semi-liquid asset classes.  As usual, the corporate bond market offers great insights into how a market like this typically plays out.  Corporate bonds are traded by multiple dealers in a very scattered and inefficient fashion, and it is not atypical to see two dealers with crossed markets (one dealer’s bid is above another dealer’s offer), just like we see across multiple digital asset exchanges.  But after a period of heavy volatility, dealers end up with a lot of long and short inventory… a dealer that is short bonds may be incentivized to start taking prices down, and if he/she does this, every other dealer has to follow suit.  Regardless of whether or not there are sellers, if there are no buyers, this game of “how low can you go” can persist for days unabated.  That is of course until the buyers start to slowly arrive. Well, the dealers who are short don’t really want to short anymore, as their goal was simply to get the price lower before they turn around and buy. And those that are long don’t really want to sell their inventory at depressed levels if they don’t feel like they can replace the risk, so everyone just slowly (or quickly) walks their markets back up.  And at the end of the day, prices artificially dropped enough to force buyers to emerge, but the buyers who tried to buy were unsuccessful at sourcing any significant sized offerings.  Eventually, the dealers take their prices back up, and lo and behold we end back where we started with very little to show for it other than a lot of stress.
This is very similar to what took place in digital assets last week.  Some dealers and funds were short, with  a lot of information working in their favor to continue trying to take prices down:
“Crypto stocks” generically declined 10-20% last week

Source: Bloomberg
But the efforts to take the market down simply didn’t hold. With rates heading back down, along with the US dollar back near YTD lows, this market just isn’t able to produce enough sellers to sustain a correction.  There was a lot of fear, and a lot of jockeying, and a lot of efforts by traders to force the market lower -- but if you talk to those who were in the market buying (ourselves included), they’ll all share a similar story of not being able to put a lot of capital to work.
Heading into the start of this week, you can see that the cavalry is starting to arrive. In fact, more “cash” was sent to exchanges than at any point in history other than one month ago. While this cash influx can be due to a variety of reasons (such as increasing collateral to avoid future forced liquidations), it could also be viewed as a very healthy sign of support and a lot of pent up buying pressure. 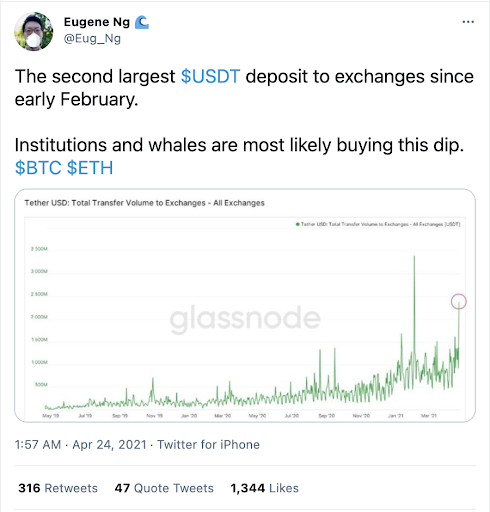 Source: Twitter / @Eug_Ng
Whether or not that cash can actually be put to work before prices head back higher remains to be seen. But you’d have to be trying pretty hard to ignore the underlying signs of strength.  This is what adoption looks like -- the top six most popular financial app downloads in the app store are all companies that allow customers to buy certain digital assets, with Venmo being the latest to join the inevitable party.  It’s hard for prices to really crash as long as this level of newfound interest persists.

Source: Twitter / @nick_prince12
De-Risking the Regulatory Hurdles
For years, we’ve heard about the regulatory risks involved in digital assets.  This past week, however, a lot of these concerns slowly began to drift away (as pointed out by Coindesk).
There is a lot to unpack here, but the takeaway is that these firms and individuals are very knowledgeable about how to work within regulated finance, and the pressure is going to be on Washington to help these companies achieve their growth goals within the constructs of new laws and regulations.  One by one the risks involved in digital assets are being whittled down to just one risk -- price.  And price risk can be managed.
What’s Driving Token Prices?
The broader markets were taken off guard last week as President Biden proposed a nearly doubled capital gains tax, which would carry a tax rate of 39.6% for the highest income bracket ($1M+). As a result, markets traded weak, with Bitcoin falling 13% and the rest of the digital asset market posting sharp losses into the end of the week as well.
Meanwhile, ETH traded remarkably strongly into the selloff, with the ETH/BTC pair breaking through major resistance at 0.046, and ETH continues to outperform into the opening this week.  With a lot of upgrades and catalysts over the next few months, ETH should set the tone for the rest of the market.

Elsewhere:
What We’re Reading This Week
After a Bitcoin Crackdown, China Now Calls it an ‘Investment Alternative’ in a Significant Shift in Tone
South Korea to Combat ‘Illegal’ Bitcoin Transactions
Time Magazine Now Accepts Bitcoin and Other Cryptocurrencies for Digital Subscriptions
Why China's Bitcoin Mining Dominance is Fading
US House Passes Bill to Require Financial Regulators to Set Up Digital Assets Working Group