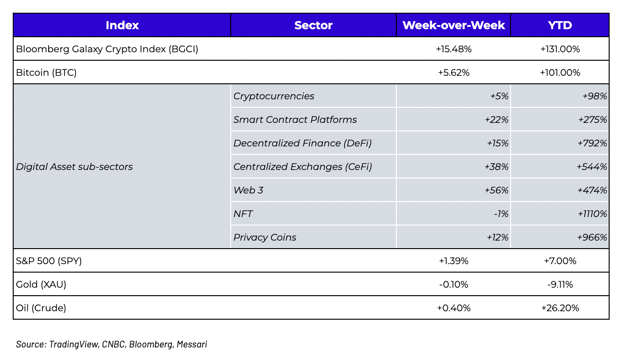 Archegos’ blow up indirectly led to changes in Bitcoin market structure
A sad but true comment was overheard at Arca headquarters this week.

“Bill Hwang at Archegos actually ran his family office brilliantly from a risk/reward perspective.  Nomura and Credit Suisse gave him something like 5-to-1 leverage via derivatives, and if the trades lose, the banks take all of the risk and they’ll most likely get taxpayer money anyway to cover up their inept risk management. No big deal.”

While this statement was clearly tongue-in-cheek and is not meant to overlook the painful losses at Archegos, it does highlight a terrifying recurring theme. Moral Hazard.  There is good reason for why we keep seeing leveraged blow-ups -- from the interest rate repo unwinds of late 2019, to Melvin Capital’s short-squeezed failure earlier this year, to last week’s leveraged collapse of Archegos Capital.  There have simply been no negative consequences for risky actions taken over the past decade, and risk management disappears when you are being blatantly encouraged to ignore risk.  Perhaps it shouldn’t be that surprising then that a week after one of the largest margin calls in history, the VIX closed down 12% to 17.3, the lowest reading since the start of the pandemic and far below its long-term average of ~20.  But while risk management is a thing of the past on Wall Street, there was a small ripple effect from Archegos that probably went unnoticed for anyone who isn’t focused on both traditional finance and digital assets.
The basis trade (or cash-and-carry) takes advantage of the difference between spot and futures prices, and has been a popular yield enhancement strategy across a variety of asset classes since derivatives markets first became liquid contracts.  With generally upward sloping curves (contango), buying spot and selling futures locks in a “risk-free” return, with the risk being counterparty failure of the exchange or dealer with which you’ve entered the trade.  While this trade can be done without leverage, most funds utilizing this strategy enhance returns even further via leverage. Of course, leverage is hard to come by right now in the wake of the Archegos fiasco, as prime brokers are facing massive losses and thereby tightening the screws on their other hedge fund clients.  One way to measure this reduction in hedge fund margin is by examining the Bitcoin basis trade across different exchanges.
The digital asset world is still largely isolated from the traditional bank and brokerage world, with only a few exceptions where worlds collide on regulated venues like Coinbase, the CME and banks like Silvergate and Signature Bank.  While the CME is the most well-known derivatives exchange that trades Bitcoin futures because of its strong Wall Street foothold (Blackrock just announced its CME BTC exposure) , the CME actually only handles a sliver (12%) of the overall Bitcoin derivatives trading volume.  This is largely because any fund or investor who has already figured out the workflows and operations of digital assets prefers to trade on the 24/7 exchanges where there are no gaps in trading caused by antiquated Wall Street trading hours and there are other tradeable opportunities besides BTC and ETH, whereby traditional funds who aren’t allowed to trade elsewhere are forced to trade on the CME for Bitcoin trading. 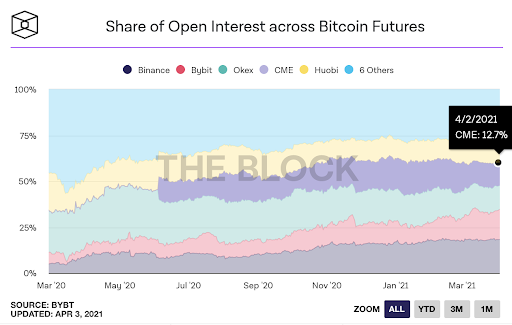 Source:  The Block / Bybt
This client dichotomy has created an unusual glimpse into just how isolated these two financial worlds truly are.  Historically, the basis (annualized yield differential between spot and futures) has been fairly similar across all derivatives venues.  But since the Melvin Capital and Archegos implosions, the basis has compressed at the CME (currently 11% annualized) while widening at digital-asset native exchanges like Kraken, OkEx, Deribit and Binance (currently 25-35% annualized).  The Archegos / Nomura / Credit Suisse margin implosion is causing leverage to be sucked out of the system in the traditional world amidst higher margin requirements, while digital asset-native investors who don’t use banks and brokerage accounts aren’t feeling the squeeze one bit.
It’s yet another example of how digital assets can truly act as a safe-haven even if the price of these assets may not be negatively correlated on a day-to-day timeframe.  The players and systems in digital assets lack the same dependency on, and interconnectedness with, the Wall Street systems and tools that brought on the last financial crisis.

Source: Deribit / CME website as of 9am PST April 5, 2021
Enough about Bitcoin -- Ethereum, DeFi and CeFi stole the show last week
Ethereum (ETH) outpaced Bitcoin (BTC) last week by a significant margin.  Other Llayer 1 smart contract platforms outpaced Ethereum by a significant margin.  Both DeFi and CeFi outpaced cryptocurrencies and Layer 1 protocols.  Last week was more evidence in a year-long case study about thematic investing.
While Bitcoin steals the headlines, Ethereum and dollar-stablecoins generate nearly all of the transaction fees, while DeFi and CeFi generate the most revenues for tokenholders.  And there are two very large events on the horizon for both sectors. 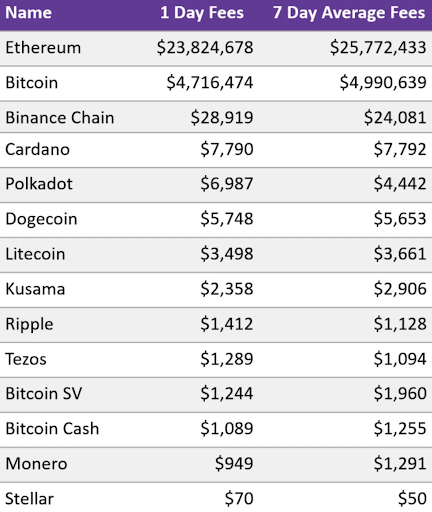 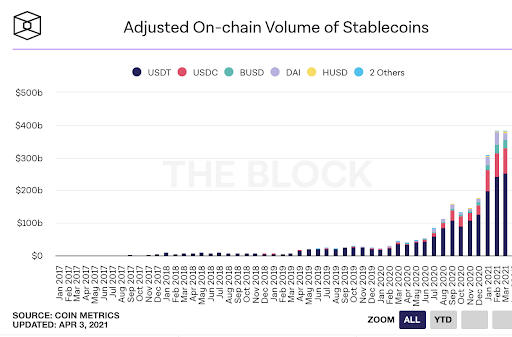 Source: The Block
For Ethereum, the EIP-1559 proposal is set to move forward in July (London Hardfork) which is a welcome change in Ethereum’s gas fee structure (for everyone except the miners), as it both sets an algorithmic base fee for a transaction and destroys ETH used in transaction fees (which made up 47% of Ethereum miner revenues in March), adding deflationary pressure to ETH.  Meanwhile, for CeFi and DeFi, Coinbase announced that they expect their direct listing of COIN equity to occur on April 14th, along with what will likely be a very heavily attended earnings call on April 6th from both traditional finance and digital assets native companies alike.  We expect multiples to continue to expand after Coinbase demonstrates to the masses the incredible operating leverage of user growth combined with underlying asset price growth, both of which contribute to record trading fees.  While the first quarter of 2021 was one of the best ever for digital assets across all observable metrics, the second quarter has significant catalysts ahead that could help contribute to a continued torrid pace of adoption and price action.
What’s Driving Token Prices?
For those that have been around this asset class for a while, the spot premium coming out of South Korean exchanges this week is a fond memory: from 2016 to 2018 the premium averaged 4.8% and peaked at 55% in January 2018. That premium is back this week, with the BTC/KRW pair trading at 74725000 ($66,250, +16%)  and the ETH/KRW pair trading at 2655000 ($2,350, +16%) as of this writing. Anecdotally, it is very interesting to watch some of the dynamics of the last cycle play out in real time in this cycle - while the conditions aren’t the same, some of the same touchpoints still exist to indicate where we are in the cycle.

With that being said, this week we look at the power of South Korean investors on asset prices in this space.  UpBit announced late Sunday night that they would be adding KRW pairs for the following assets: AXS (+75%, +46% from announcement),  STX (+35%, +46% from announcement), FLOW (+26%, +10% from announcement), and DAWN (+425%, +325% from announcement). South Korean flow has historically been among the most bullish in the space, so it is no surprise that the introduction of a KRW pairing to these assets brought in new demand.
What We’re Reading this Week
Visa Now Settles Payments in USDC Stablecoin on Ethereum Blockchain
BlackRock Has Begun Trading Bitcoin Futures
PayPal Now Allows Crypto Spending at Millions of Merchants
Crypto M&A Set to Notch Record After Doubling in 2020, Says PwC
New York Launches a Blockchain-Powered COVID-19 Passport
Eastern Caribbean Central Bank Publicly Launches New Digital Currency
Michael Jordan Joins $305M Investment in Firm Behind NBA Top Shot
And That’s Our Two Satoshis!
Thanks for reading everyone!
Questions or comments, just let us know.

Why It’s Still So Early in Digital Assets