“That’s Our Two Satoshis” — There Were Signs, In Retrospect 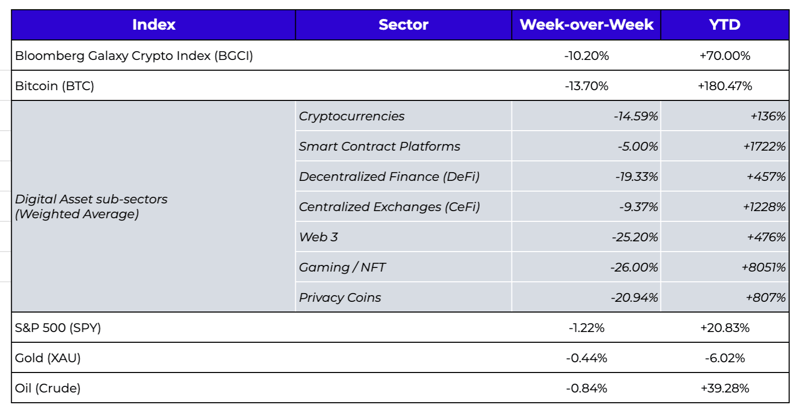 Source: TradingView, CNBC, Bloomberg, Messari
It was only a few weeks ago when markets were terrified of inflation, rapidly rising rates, and a strengthening US dollar.  Then Omicron appeared.  Now all market fears have completely shifted towards expected economic slowdowns.  Uncertainty related to the Omicron variant and tightening US monetary policy brought the Nasdaq down -2.6%, pushed the VIX up to the highest intraday print since February, caused a massive flattening in the yield curve (2yr +9 bps, 30yr -15 bps), and caused a 1% decline in the USD.   That’s not exactly the reaction you’d expect if rising rates and inflation were still the biggest concern.
A few data points illustrate how quickly the shift in sentiment occurred:
SPACs, IPOs, tech stocks, ARKK, meme stocks and crypto stocks all continued to slide last week.

Source: Bloomberg
Amidst these risk-off moves in retail-dominated assets, a digital asset selloff may have been a matter of “when”, not “if”.   But as has always been the case, digital asset correlations are inconsistent, and only predictably rise with equities in the face of really big, broad, global “risk-off moves”.  In fact, for most of last week, it looked as if digital assets were going to buck the trend.  The market was showing incredible dispersion into Friday’s equity close, with few signs of any broad-based contagion. 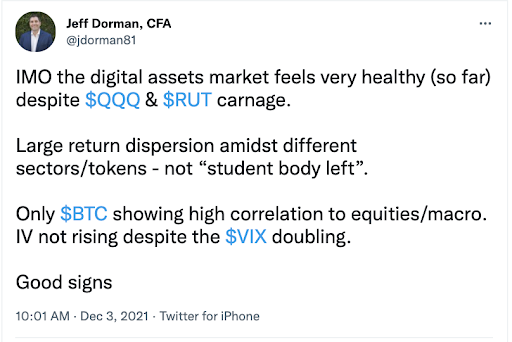 Source: Twitter
But that didn’t last through the weekend.  A weak equity close coupled with an illiquid weekend session spelled disaster for digital assets.  Our friends at Cumberland summed up the events succinctly:

“Saturday’s Asia session saw a significant selloff in BTC, with the price slipping from $52k to as low as $42k in a very short period (about 30 minutes). This selloff had many similar characteristics to other significant drops in the last few years. The price had been sliding lower over the prior 24h, from $57k to $52k, a multi-month low, uncovering new liquidation levels. The gap lower occurred during an illiquid session, early in the Asia weekend, when bank wires were closed and many traders were off-desk (to the extent that anyone is offdesk anymore). The selloff was led by leverage exchanges, particularly ByBit. Across all futures exchanges, open interest dropped by about 20% on the move, and at ByBit, that number was above 40%. Many centralized exchanges were unusable post-selloff, as they collapsed under high volumes, and on our desk, we saw exceptionally high volume as a result, which tends to be the case in these gap moves.”

As is always the case, when liquidity is low, and price swings are large, that price dispersion temporarily goes out the window.  Market makers take every token down together, and there are few places to hide until the cavalry arrives.  Sometimes this can take weeks or months before a certain token finds its footing again, other times it can happen immediately.  For example, Ethereum (ETH) actually hit a 3-year high versus Bitcoin, something that surprised many but was consistent with our findings which show that Bitcoin is no longer a defensive asset.  While ETH was still down in dollar terms, Terra Luna (LUNA) was one of last week’s biggest winners, and for good reason.  The LUNA ecosystem saw big jumps in TVL, fees and active addresses last week, while most other chains saw revenues fall sharply, with double digit drops on Solana, Avalanche, Fantom, Cardano, Near and Arweave. 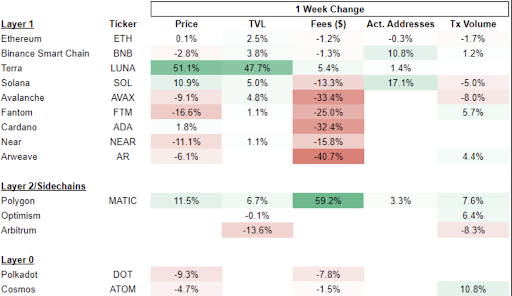 Source: Arca
That didn’t stop LUNA from getting caught in Friday night’s downdraft, but it recovered far faster than any other token. 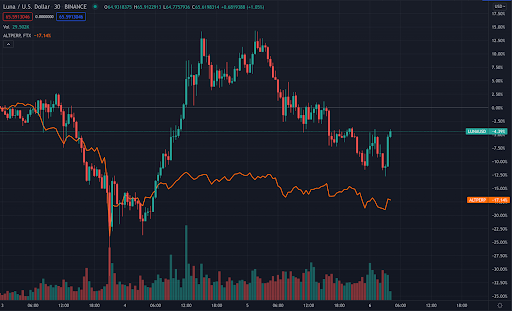 Source: TradingView
Our friends at Galaxy touched on how price action like LUNA can happen -- where market makers completely underestimate the strength of the bid.  They wrote:
Said another way, the prices aren’t really indicative of anything for a few hours until the dust settles, and in both LUNA and ETH’s case, nothing changed at all other than the poor unfortunate souls who were laid to rest by leverage.  There were buyers of LUNA and ETH before the weekend selloff, and there were buyers after… everything else was just noise.  But that’s an incredible amount of noise in a very short amount of time.  There’s a reason the majority of institutional investors still prefer venture funds over liquid funds -- many institutions are terrified of mark-to-market and prefer to pretend it isn’t happening by investing in private rounds with no observable price.  Of course the volatility is the same -- but if you don’t mark it, it didn’t happen right?
For those tokens that didn’t bounce back, it either means the buyers were never there in the first place and prices were artificially elevated in the same way due to algos/market makers, or the buyers just haven’t arrived yet.  Ultimately, as we’ve seen during each liquidation-induced sell-off from the past 2 years (and there have been many), these highly correlated moves do not last long.  Out of the carnage we will see certain sectors continue to go down, and others will prosper.  For example, following the May 2021 selloff, over the next six months (using a representative sample):
We’re likely to see something similar over the next six months. While the weekend will give naysayers a lot of ammo for the “it’s all one correlated market” narrative, it matters much more how different parts of the market respond from here than anything we saw over the weekend.
What’s Driving Token Prices?
What We’re Reading This Week
Celsius CFO Arrested on Charges Tied to Former Job at Moshe Hogeg’s Firm
How a Hacker Added Her Ethereum Wallet to Twitter's Tip Jar
What Happens When You’re the Investment
SoftBank Bets on Asian Metaverse Platform Selling Digital Gucci, Dior
Coinbase Buys Unbound Security, Marking Its Presence in Israel
And That’s Our Two Satoshis!
Thanks for reading everyone!
Questions or comments, just let us know.
The Arca Portfolio Management Team
Jeff Dorman, CFA - Chief Investment Officer
Katie Talati - Head of Research
Hassan Bassiri, CFA - PM / Analyst
Sasha Fleyshman -  PM
Alex Woodard - Research Analyst
Andrew Stein - Research Analyst
Nick Hotz, CFA - Research Analyst
Wes Hansen - Director of Trading & Operations
Mike Geraci -  Trader
Kyle Doane -  Trading Operations
David Nage -  Principal, Venture investing
Michael Dershewitz -  COO of Arca Funds