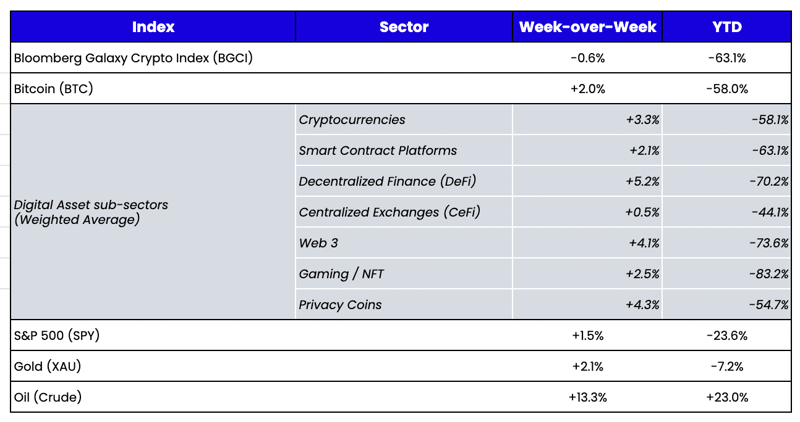 Source: TradingView, CNBC, Bloomberg, Messari
When TradFi Is More Volatile Than Digital Assets
The equity and bond markets had a wild ride this week, with equities rising 5% to start the week before giving most of it back by week’s end, while bonds retraced most of the recent rally. Meanwhile, the U.S. Dollar continued its strong march higher. For most of the year, we’d follow a statement like this by saying, “... and digital assets followed suit,” but that isn’t the case anymore. In fact, not only are digital assets seemingly immune to the gyrations of TradFi markets, but this market is now exceptionally boring compared to TradFi markets. While the VIX and MOVE markets are heading back towards YTD highs, volatility in digital assets (as measured by BTC and ETH as a proxy) is approaching YTD lows.
Historically, periods of low volatility are met with explosive moves one way or another. They typically break down when market participants are too bullish and break up when market participants are too bearish—and let’s just say being too bullish isn’t the problem right now.

Source: The Block
We Will Get DAO Governance Right One Day…
By Alex Woodard, Arca Senior Analyst
We will get DAO governance right one day, but today it is often a no-consequence sham.
Recently, we wrote about a flurry of unique opportunities arising during the bear market and alluded to Fei Labs’s proposal to dissolve Tribe DAO as one of several “event-driven” investment opportunities. The investment was simple: the TRIBE token traded at a valuation lower than the Protocol-Controlled Value (PCV), which is a fancy way of saying it traded below book value. As a result, upon liquidation of the DAO, the assets liquidated were worth more than the token representing these interests.
Now that Tribe DAO has completed its dissolution and paid the final redemptions, we want to dive into how this process unfolded so that future projects winding down don’t make the same questionable mistakes.
Overview
Once the DAO announced it would be disbanding and liquidating, the liquidation proposal quickly went through three components, each requiring corresponding votes from TRIBE token holders:
The first was not contentious, as there were numerous votes to sell PCV assets into DAI to limit the price volatility of the PCV assets during the redemption process. But the other two went through quite a few iterations before arriving at the final decisions.
First, regarding the Rari Fuse hack repayment, here’s a bit of history. The failed Tribe DAO experiment started when Fei Protocol merged with RariCapital DAO in 2021 to create the Tribe DAO. Later in April 2022, an exploit of the Fei-Fuse money market led to a loss of $80 million. At the time, Tribe DAO had a governance vote on whether to reimburse the exploit victims. While the majority of the DAO voted in support, the reimbursement did not happen. A second vote on the repayment plan failed one month later, leaving hack victims and Tribe DAO in limbo. Fast forward to the liquidation: the initial proposal did not account for fully repaying all hack victims. FRAX (a decentralized stablecoin DAO) and Olympus (a decentralized reserve currency that acts similar to a mutual fund) were the largest losers in both the hack and the initial repayment plan. In an effort to receive a full repayment for their hacked assets and to honor the initial vote, OHM and FRAX offered a bribe of $9 million or up to 10c per TRIBE token to those that delegated to them so that they could vote in favor of the total repayment during the dissolution process. The book value per token (BV/T) post repayment plus the bribe was greater than BV/T in the current proposal and led to over 90 million TRIBE tokens delegated to them and full repayment. (Author’s note: This was a really cool use of token incentives to ensure the right outcome).
Further, during the hack repayment process, numerous questions were asked in the Discord channel about which assets would have a claim on the PCV. Specifically, unvested tokens from the equity round, FEI in the time-locked LP, and an undisclosed wallet (that many believe to be a team wallet since the founder is a multisig signer). Further, questions about the payout, non-labeled team wallets, minted FEI, and unvested TRIBE all having a claim have been asked numerous times in the Discord channel, but have been ignored and remain unanswered.
These unanswered questions made it impossible for the winddown to be completed in good faith and in the best interest of TRIBE token holders. It also considerably changed the math behind the dissolution, with TRIBE token holders losing out and the team and VCs receiving nearly 50% of the claim on the PCV—an especially odd outcome considering this project was an abject failure and went under after just 1 year. Let’s go over each of the injustices: 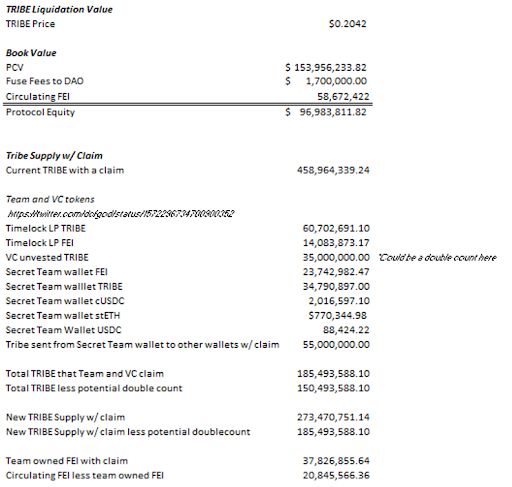 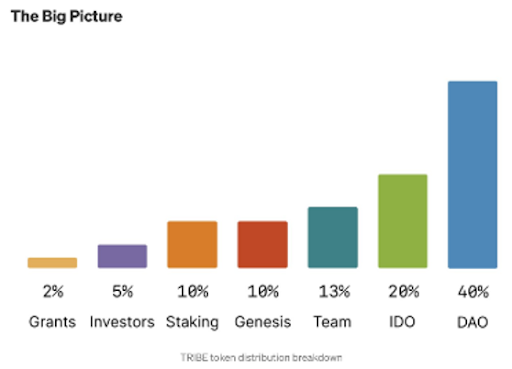 Source: Tribe Docs.
This situation gets even more questionable when we look at the initial allocations for both the team and VCs. Each group was supposed to receive 18% of the total supply of TRIBE after a 4-year linear vest. But with a combination of the minted FEI, unvested tokens having a claim, and the undisclosed team wallet, they received ~50% of the total PCV. So it seems like the following statement the team previously released in their docs was untrue:

Source: Fei Labs docs, DCF GOD for finding
So, back to the dissolution. By the time the hack reimbursement occurred, it was clear that a community member was going to call a vote on whether unvested tokens should have a claim on the PCV. The goal was to allow TRIBE holders time to undelegate from OHM so they could vote since OHM completed the hack reimbursement vote and had no other reasons to participate in TRIBE governance. However, Fei Labs was not as patient and pushed the full reimbursement vote just a day later while 50 million TRIBE tokens were still delegated, effectively eliminating their voting power.
Luckily, OHM voted for “more discussions” to allow holders time to undelegate their tokens. 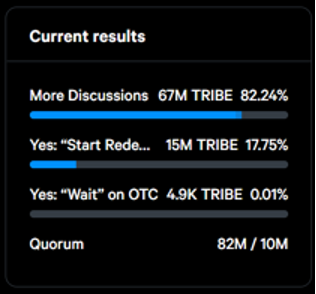 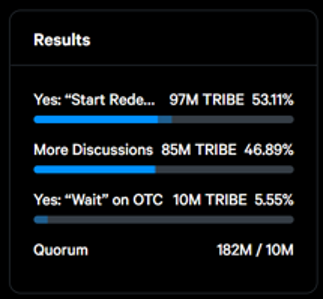 To be clear, there are no issues with a DAO deciding to dissolve. First, not every project will succeed. Second, it is hard to succeed as a start-up with a liquid token price while simultaneously managing a community. However, active governance tokens and future projects can learn multiple lessons from the Tribe DAO dissolution about what not to do. 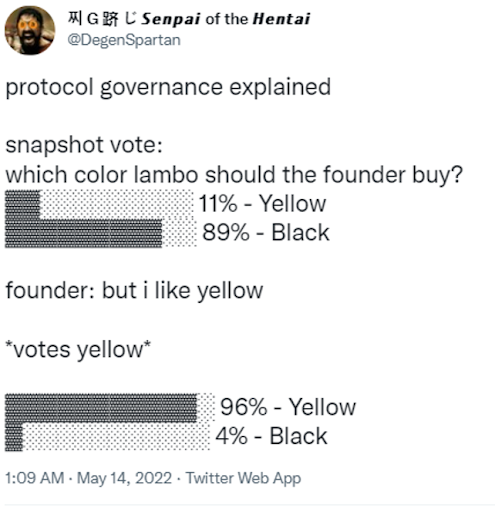 Source: https://twitter.com/DegenSpartan/status/1525387907737227264
Building is hard. Community management is hard. Governance is hard. But being transparent, forthcoming, and honest is not that hard.
We will get governance right one day—and there have been plenty of cases where communities and teams have put their best foot forward—but the TRIBE liquidation will not be a case study for success.