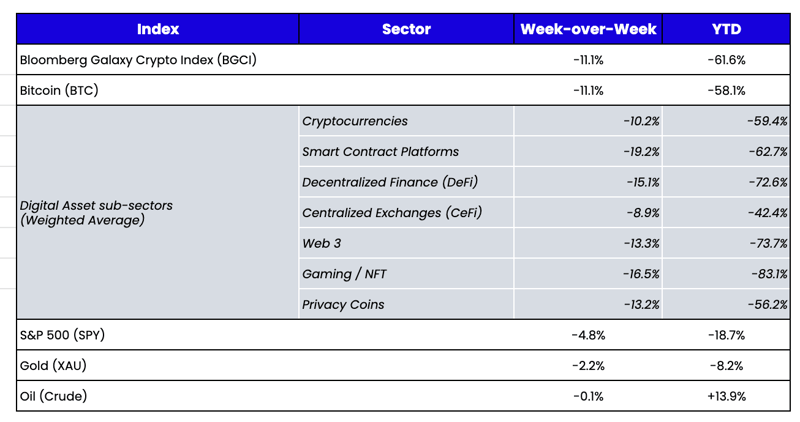 Source: TradingView, CNBC, Bloomberg, Messari
The ETH Merge Was a Smashing Success
By now, most of you have read about the success of the Ethereum Merge from proof-of-work (PoW) to proof-of-stake (PoS). It is an outcome we had nearly 100% confidence would happen without a hiccup, but admittedly had little idea how ETH would trade in the immediate aftermath. Even though we and others trusted the Merge would complete seamlessly, getting to a point of certainty was no small feat. Let’s take a minute to reflect on just how significant this technological achievement was. As Galaxy Digital explained:

“Never before has a public blockchain of Ethereum’s size radically upgraded its consensus mechanism to a new model and done so without sacrificing network liveness. At no point were Ethereum decentralized applications (dApps) and user transactions halted on-chain to allow time for this upgrade to occur. While there were off-chain service providers such as exchanges that preemptively did not offer trading services during the Merge, the upgrade itself did not trigger an extended period of network downtime. Switching from a PoW to a PoS consensus protocol was by far the riskiest code change to date on Ethereum. It required the longest period of research and testing relative to other code changes on the network. In many ways, the completion of the Merge affirms the powerful potential of open-source software development and the abilities of Ethereum core developers to coordinate complex upgrades even with billions of dollars at stake and an exponentially growing ecosystem of stakeholders operating on the network.”

Well said. This historic achievement became a foregone conclusion because of how much work developers dedicated to ensuring a successful outcome over the past several years. In terms of price action, ETH fell roughly -25% week-over-week. This outcome was much more surprising, but not entirely unexpected. We always believed the ETH Merge was a 3-step investment.

Step 1 (Completed): Long ETH once an official Merge timeline was announced. This part of the trade largely ended two weeks ago.

Source: Delphi Digital
Step 2 (Active): Price action in and around the Merge, which includes a lot of arbitrage unwinds from those that purchased (or borrowed) ETH to receive an airdrop of the forked PoW chain (ETHW). This outcome had the most uncertainty, as there were various factors influencing direction (arb unwinds, “sell the news” event price action, macro hiccups). Ultimately, it appears the Merge itself did not immediately attract new buy interest, or new buyers are about to get a nice discount courtesy of momentum traders with itchy trigger fingers.
Step 3 (TBD): Long ETH for the next 6-12 months as ETH benefits from being the most “pure play” blockchain investment and because it’s just simple math.
Before the Merge, newly minted ETH (e.g., inflation rewards) were split between miners and stakers. Daily, about 13,000 ETH (~$20M) were distributed to miners, and only 1,600 ETH (~$2.5M) were distributed to stakers on the consensus layer (Beacon chain). After the Merge, ETH issuance falls 88% as PoW mining goes away, but staking will remain unchanged at 1,600 per day. On top of this, via the EIP-1559 proposal implemented earlier this year, a portion of ETH transaction fees—which dwarf any other blockchain or application—are burned, creating the equivalent of a continuous buyback program. As a result, the daily ETH burn may sometimes exceed the net daily emissions, potentially placing ETH in a very small category of tokens that both produce revenue and have amortizing supply schedules rather than inflationary supply. It’s worth noting that the other amortizers (CHZ, BNB, LEO, and FTT, for example) consistently outperform both bull and bear markets.
Source: TradingView
And finally, after years of punishing the digital assets industry over high energy usage, the anti-ESG campaigns that have plagued Bitcoin have now declared ETH as the victor in this category. 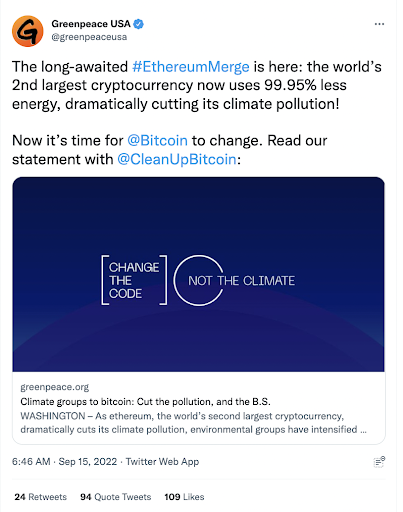 Source: Twitter
As we await to see how the next few years play out, one thing is (somewhat) certain. While Bitcoin may be the face of digital assets, Ethereum is now the backbone of DeFi, NFTs, DAOs, Layer 2s, and so on, with 3,500 active dApps. This is a big deal and won’t show up in a week’s worth of price action.
Let’s Get the Crypto Analogies Right, People
For years, we’ve been fighting a losing battle as we continuously paint a picture that digital assets are unique and complex. In contrast, the media generally paints all of “crypto” with one broad brush stroke. Whenever a reporter asks me “how crypto is trading,” I immediately respond, “How are ETFs trading? Are ETFs up or down today?” Of course, that’s an unanswerable question. ETFs are simply a wrapper that house many types of assets, often completely unrelated other than the package in which they are offered—the ETF. Similarly, blockchain-based digital assets are simply a wrapper in which a variety of assets now reside.
Fortunately, the ETH Merge has further separated Ethereum from Bitcoin. So perhaps now we can finally get the message across that most other digital assets are also very different from each other. To do this, let’s use some analogies:
We could keep going: Helium (HNT) is a telco infrastructure play like American Tower or SBA Communications. Chainlink (LINK) is computing infrastructure like Intel or Advanced Micro Devices. Chiliz (CHZ) is a sports and entertainment company like DraftKings. The Sandbox (SAND) is a gaming platform like Take Two or Activision Blizzard.
The point is that for the first time, the Ethereum Merge is forcing the regular digital asset talking head to think and speak about the uniqueness of these assets. And once you start, you realize just how much depth this market offers.
You wouldn’t ask a long/short equity fund manager to comment on gold, so let’s stop asking every digital asset participant to comment on Bitcoin.
And That’s Our Two Satoshis!
Thanks for reading everyone!
Questions or comments, just let us know.
The Arca Portfolio Management Team
Jeff Dorman, CFA - Chief Investment Officer
Katie Talati - Director of Research
Hassan Bassiri, CFA - Portfolio Manager
Sasha Fleyshman - Portfolio Manager
Alex Woodard - Research Analyst
Nick Hotz, CFA - Research Analyst
Bodhi Pinker- Research Analyst
Wes Hansen - Director of Trading & Operations
Kyle Doane - Trader
David Nage - Principal, Venture Investing
Michael Dershewitz - Principal, Venture Investing
Michal Benedykcinski - Research Analyst
Andrew Masotti - Trading Operations
Topher Macpherson - Trading Operations