What Happened This Week in the Digital Assets Markets?
Week-over-Week Price Changes (as of Sunday, 08/21/22) 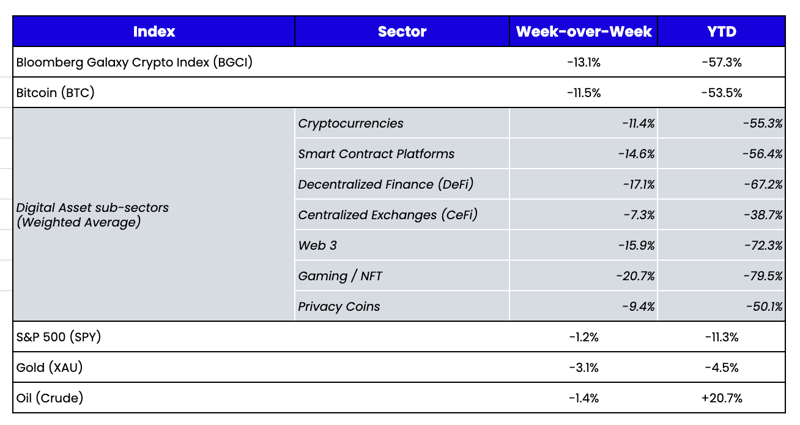 Source: TradingView, CNBC, Bloomberg, Messari
High Beta Losses
A week after we declared that digital assets have decoupled from macro, naturally, the macro backdrop took center stage once again, as equities, bonds, and digital assets sold off following hawkish statements from Fed officials. It sets the stage for this week’s Jackson Hole economic forum, where Powell will likely tread carefully after missing the mark with his assessment of the economy at last year’s summit.
Almost every coin and token traded lower last week, with only a handful of exceptions. It’s been six weeks since digital assets traded homogeneously like this, breaking a long string of healthy price dispersion. However, digital assets traded with close to a 10x beta to equities last week, which is abnormally high, suggesting something else was at play besides a generic risk-off environment. This outsized move was likely driven by continued negative (and uncertain) interpretations regarding far-reaching sanctions OFAC levied on Tornado Cash and everything it touches. Most notably, last week, Ethereum core developers discussed at length measures to preserve the Ethereum protocol’s censorship resistance. While mostly hypothetical for now, this debate picked up steam after a question to Lido Finance, Coinbase, Kraken, and Staked asked how they would handle validating Ethereum nodes if U.S. regulators requested they censor certain transactions. Brian Armstrong, CEO of Coinbase, responded and said that while the scenario is one he hopes the exchange does not encounter, Coinbase would ultimately choose to shut down itsx staking operations rather than participate in censorship. 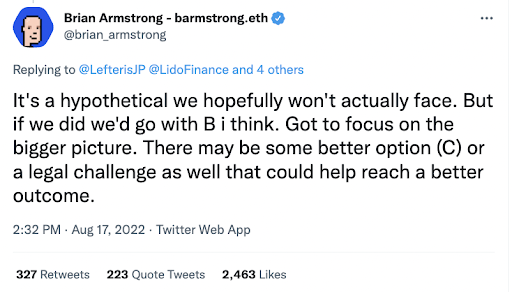