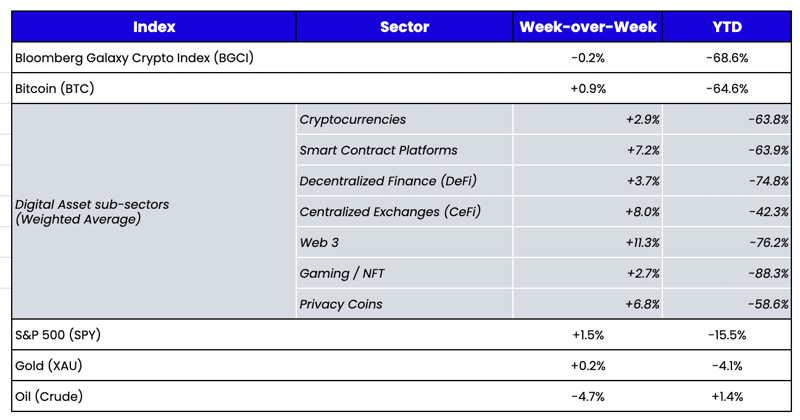 Source: TradingView, CNBC, Bloomberg, Messari
The DCG Situation Got Worse, but the Market Doesn’t Care
Last week, while there were many more unknowns than facts, we did our best to unravel the Digital Currency Group (DCG)/Genesis woes and the likely scenarios for their Grayscale subsidiary. Shortly into the week, DCG CEO Barry Silbert released a letter to shareholders giving the market some clarity regarding how bad the situation is, including details about various intercompany loans between DCG and Genesis. On the surface, it looks bad enough—DCG voluntarily assumed $1.1B of bad debt from Genesis and borrowed more money from Genesis to buy back both DCG stock and GBTC on the open market at much higher levels than where they are each currently trading. Basically, DCG did a levered buyback (or, essentially, an MBO) at the market highs using short-term debt financing from its own subsidiary (Genesis) that may now be insolvent. The outlook may be even worse if you extrapolate (speculate) further how DCG, Grayscale, Genesis, and various partners (Three Arrows/BlockFi) continuously inflated Grayscale AUM for years to increase cash flows at this subsidiary. Simultaneously, they were blowing a hole in another subsidiary by allowing these same Grayscale assets to be used as collateral for levered positions by now-bankrupt borrowers.
So, this isn’t a great situation, and there are only a handful of ways this can play out (more on that in a minute). But for the second week in a row, the digital assets market chewed through the negativity and ended mostly unchanged. Even the often volatile and unpredictable Thanksgiving trading days failed to create downward volatility. Historically, Thanksgiving has led to outsized moves as large traders have targeted levered players, hoping to catch them sleeping during the holiday-induced lower trading volumes. It may not have occurred this year because many of the largest, most levered players are now out of the market, and no one was incentivized to try to break the market. For example, in years when the market broke down, a large trader would typically take out a short position before selling heavily into low liquidity, hoping to liquidate levered longs and ultimately buyback assets cheaper. But with so many market makers, lenders, and exchanges temporarily or permanently out of business, it’s just not that easy to get short to begin with, let alone to find levered longs to target.
While many funds and investors await the next crash, the market is telling you that the bad news no longer generates downward price action, and it will take real spot selling from sticky investors to take the market lower.
Buying GBTC and ETHE Is Actually a Bearish Trade
Back to DCG—part of the reason the market isn’t trading lower ahead of some potentially terrible outcomes is that these bad outcomes may actually be good for digital asset prices. Walking through exactly how these scenarios would play out helps to illustrate (Arthur Hayes at Bitmex does something similar in a great article, but I disagree with his scenario analysis):
Moreover, the discount to NAV of GBTC and ETHE has actually decreased over the past week. This may look bullish since previous market rallies took place while these trusts traded at a premium to NAV. But buying GBTC and ETHE is structurally a bearish trade, not a bullish one. Given how bearish most investors are, it makes sense to partially express that downside view via a long position in an asset that will benefit from bad outcomes.
As these Grayscale assets are more likely to trade well during bearish scenarios, essentially, owning GBTC or ETHE is like owning a put option on the market (or selling a call). So, adding GBTC and ETHE is a way to profit from bad outcomes.
DeFi Natural Selection
As more and more centralized entities struggle, the chorus of naysayers and “I told you so” chidings grows larger. Worse, many continue to inadvertently or purposely conflate blatant and (seemingly) intentional fraud at FTX/Alameda with unintended (albeit detrimental) digital asset failures. The mainstream media has even begun to craft a narrative whereby SBF was a victim of technological advancements that lured him into bad trades.
First, the media and those who read their stories must fully separate what SBF and FTX did from other events that unfolded in 2022. FTX perpetrated fraud, a violation of terms of services, and a series of intentional coverups. Full stop. Then, those that accept the idea that FTX and Alameda are fraudulent need to stop extrapolating this event into a notion that all digital assets are a scam. This is flawed logic. Using that same logic, you would have to assume that all stocks, bonds, U.S. dollars, oil barrels, phones, security systems, and science breakthroughs are scams because Madoff, MF Global, Enron, Worldcom, Tyco, and Theranos were fraudulent. The assets used in the scam are not relevant.
As we continue to learn more about what went wrong with digital asset investing in 2022, it is important to find the right analogies to help investors process the information. Perhaps the most informative market parallel came from this article about investing in the U.S. railroad industry in the mid 1800s. From it, we learn:

“The easiest conclusion of the railway crash of the 1840s would simply be that investors were right in their bet, slightly overindexed on their conviction, and terribly wrong on their timing: they were just too early. But there’s a more insidious lesson I want to take from that debacle.
Investors were so right that they made themselves wrong. They bet on the right industry so forcefully that they destroyed it for years to come.”
“…[I]nvestors ultimately destroy the industries they love. The result of deploying more money than can be returned is not simply a paper loss—it’s the complete destruction of confidence in the industry as a whole as funds catastrophically collapse. Crashes force the financiers to recognize not only that they have made bad decisions from addiction, but that they are addicts in the first place, now facing the low lows of desperate alienation after high highs of overinflated expectations.”
“…[W]hat we are witnessing in crypto is industry suicide, not only by the hands of scamming lenders operating out of hastily-labeled google sheets, but by investors who loved this technology for all the right reasons that they couldn’t help but smother it to death. Also unlike railways, crypto has a whole other arm that is genuinely transparent, known as actual crypto, aka DeFi’s on-chain transactions; crypto’s seppuku as an industry is strangely bullish for crypto as a technology.”

The whole post is worth reading, as it describes how investors can ruin a groundbreaking industry simply by believing in it too much. Yet, in the end, it’s another rallying cry for how successful DeFi has become. DeFi protocols keep getting stronger through the market’s counterparty concerns.
There are knock-on effects driven by this lack of trust in centralized counterparties and subsequent faith in DeFi. For instance, the rise in self-custody is evident in the increase in hardware wallet sales (Ledger and Trezor reported record sales last week). At the same time, on-chain metrics show that wallet addresses with material amounts of BTC and ETH have seen a sharp uptick. In addition, data from Glassnode shows that November is witnessing the largest monthly decline in BTC exchange balances in crypto history. We’re seeing an exodus of assets from centralized exchanges. Further, before a centralized exchange or lender runs into trouble, we continuously see self-executing overcollateralized DeFi loans being paid down first—because there is no negotiation with code—essentially making DeFi loans a senior claim to centralized loans.
This may not make asset prices increase, but it certainly validates a use case for blockchain.
Withdrawals from CEXs are at a 90-day high 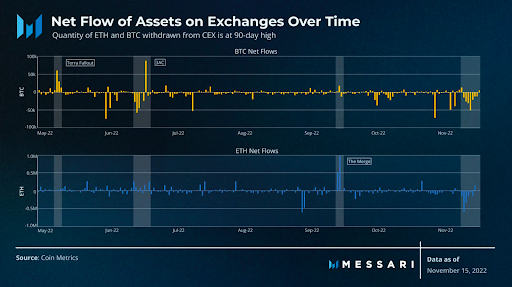