What happened this week in the Digital Assets market
Week-over-Week Price Changes (as of Sunday, 8/08/21)

“Most of the attention is being paid to whether the fees offset new issuance. I want to focus your attention instead on the mechanism of the tailwind. In the history of Ethereum’s price action, there was no direct connection between increased network activity and increased price. The price always rose purely as a result of the same investor activity as on the Bitcoin network, and so Ether has had a very high degree of correlation to Bitcoin. From this point on, however, if the Ethereum network’s activity is uncorrelated with Bitcoin’s price, we should begin to see Ethereum’s long term correlation with Bitcoin deteriorate as ETH price is no longer tossed around by the winds of speculation but grounded instead in its own network’s value creation”.

Ethereum 2.0: What’s at stake?
The final checkpoint on ETH’s path to money-ness will be the Ethereum 2.0 merge, expected early 2022. After the merge, Ethereum may start to look a lot more like the credit-based economy we know and, um, love today. The main economic difference between the current iteration of Ethereum and ETH 2.0 is the switch from proof of work (PoW), where miners validate the blockchain, to proof of stake (PoS), where users lock up ETH with validators to do so. These validators maintain the risk of being “slashed”, having a portion of their funds destroyed for noncompliance or inactivity. This slashing mechanic helps make PoS much more economically efficient than PoW. In an attack on a PoW network, a hacker must simply maintain a majority of the hash rate to allow block reorganizations, double spends, and all sorts of bad stuff. In Ethereum 2.0’s PoS, a would-be hacker must gather 51% of the ETH validating the chain (potentially around 10-20%+ of all ETH in circulation). Upon realizing the network was under attack, the community would fork (duplicate) the chain and slash the attacker’s funds on the new chain, forcing them to start all over again. 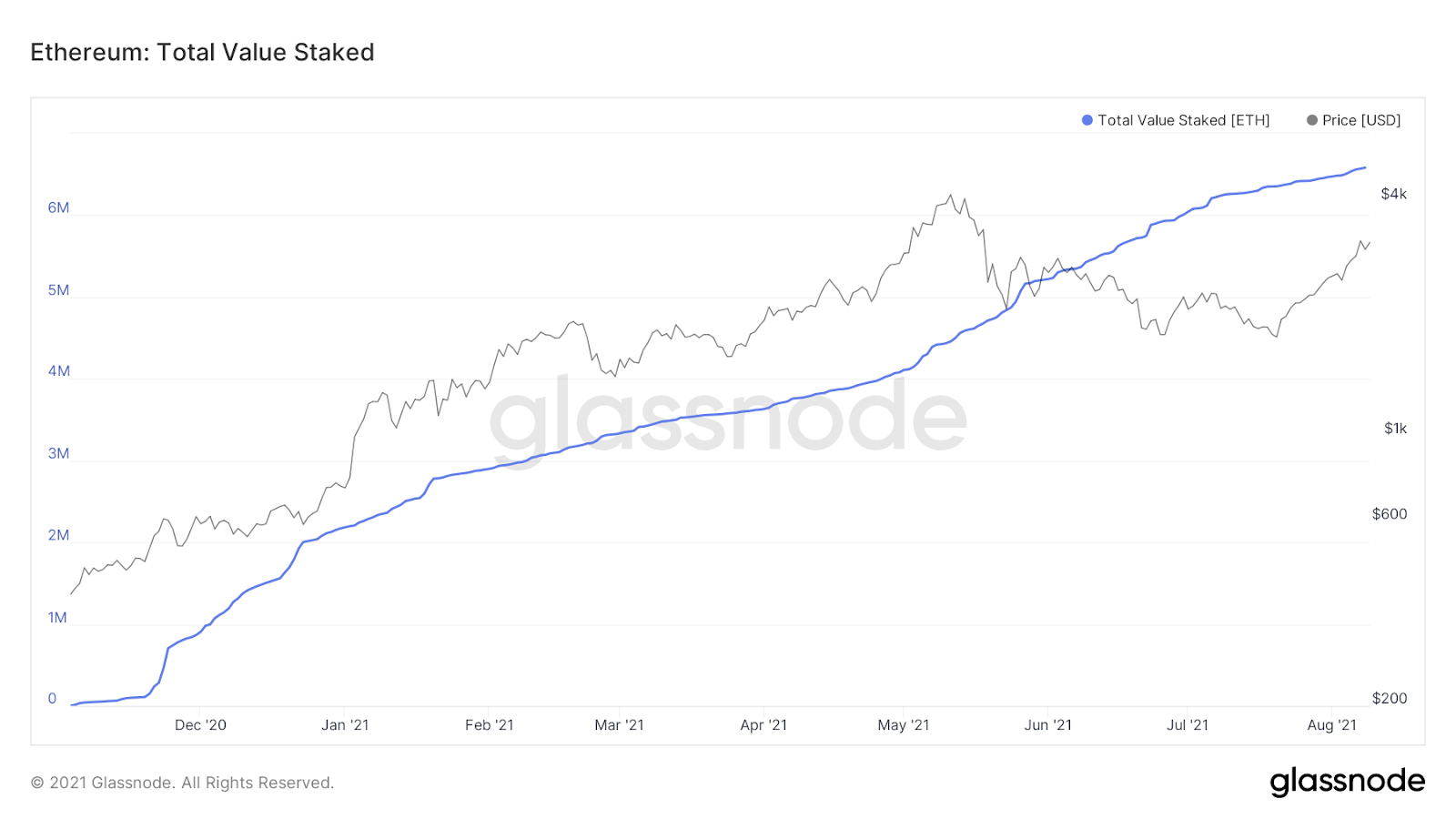 Source: Glassnode
This increase in efficiency will mean drastically lower issuance is required to secure the chain, on the order of 65-90% less. Running at just 0.5-1.5% annual issuance, ETH will likely see fees burned from transactions per EIP-1559 exceed issuance most of the time. Instead of Bitcoin’s disinflation (supply increasing at a decelerating rate), Ether over time will be outright deflationary (supply decreasing).

Source: EthHub
ETH issuance will no longer be paid to miners, but to ETH holders locked up in a staking contract. This variable yield, dependent on the amount of ETH staked in the contract, may set a sort of “risk-free” rate for the DeFi ecosystem, similar to the Federal Funds rate set by the Federal Reserve Board of Governors (more algorithmic monetary policy!). Most ETH holders will likely not deposit directly to the staking contract, but instead do so through intermediaries, both centralized (e.g. Coinbase) and decentralized (e.g. Lido). These parties will act like money markets for holders, providing the ETH depositors proxy assets that sacrifice liquidity for yield. The proxy assets like Lido’s stETH will become composable in DeFi and may even achieve near-level status with ETH for payments, deposits, collateral, etc.
However, because of ETH’s centricity in terms of liquidity in the ecosystem and its knighting from EIP-1559 as the only way to pay gas fees, we will never have to worry about ETH being supplanted by derivative assets. When liquidity dries up, like it did in March 2020, liquidity-sensitive investors sell Treasury bonds to buy dollars because dollars have special status as a medium of exchange and tax-payment asset within the U.S. economy. With its upgrades in place, ETH gains that same privilege.
The flows into the staking contract also serve to artificially reduce the supply of ETH available. When assets are locked up in staking, they are unable to be sold, which has the potential to increase the perceived value of unstaked ETH. If demand flows remain the same or even increase, we may see what amounts to a supply crisis for ETH as investors scramble to obtain the increasingly illiquid asset to store value in and pay fees with.
A final, perhaps obvious point is that despite having liabilities to pay out to stakers, Ethereum will retain what economists call its “monetary sovereignty”, meaning it only pays out liabilities in the asset it is able to print. Monetary sovereigns in the world like the U.S.A., Japan and Australia are in a powerful position since they can never voluntarily default on their debts. Since Ethereum is a currency issuer that only spends ETH, it can never default. Compare this with a typical U.S. company or even Greece in the early 2010’s which accrued liabilities in a currency (USD and Euros, respectively) which it could not issue. In this situation, default is always a risk weighing on the mind of an investor, but never a risk for ETH holders.
Currencies hold a powerful status in modern society as the only assets you can spend, store value in, earn interest from, and pay taxes with. While ETH is currently only used as a medium of exchange in its ecosystem, over the next 12 months it will gain many of the other properties of money. EIP-1559 and Ethereum 2.0 establish a powerful, adaptive monetary policy via basefee burning, cement ETH’s role as the central asset in the ecosystem by ensuring it will be preferred liquidity asset, create an algorithmic risk-free interest rate for DeFi, and make ETH dramatically scarcer. With these features in place, the case for Ether as a reserve asset for the age of decentralized digital money looks much clearer.
What’s Driving Token Prices?
Ethereum (ETH) was the talk of the town last week, as noted above, and the token followed suit with a +15% week-over-week gain.  Elsewhere, a few other tokens had idiosyncratic events leading to price action:
What We’re Reading This Week
JPMorgan, Led by Bitcoin Skeptic Jamie Dimon, Quietly Unveils Access to a Half-dozen Crypto Funds
Brazilian Central Bank Projects ‘Significant Migration’ to Digital Payments
Miami Set to Launch Its Own Cryptocurrency, Reward Users in Bitcoin
Gensler Sets SEC Sights on DeFi, Crypto Lending and More in Expansive Speech on Regulation
CFTC Commissioner Says SEC Lacks Authority Over Commodities, Including ‘Crypto Assets’
Ethereum's London Hard Fork Upgrade Has Been Burning Ether at a Rate of Around $8,900 a Minute, Data Shows
And That’s Our Two Satoshis!
Thanks for reading everyone!
Questions or comments, just let us know.
The Arca Portfolio Management Team
Jeff Dorman, CFA - Chief Investment Officer
Katie Talati - Head of Research
Hassan Bassiri, CFA - PM / Analyst
Sasha Fleyshman - Junior Portfolio Manager - Special Situations Analyst
Wes Hansen -  Head of Trading & Operations
Alex Woodard- Analyst
Mike Geraci- Trader
Andew Stein, VP of Research
Kyle Doane- Trader Operations Associate
Matt Hepler- VP, Portfolio Manager
Nick Hotz- Sr. Global Macro Analyst
To learn more or talk to us about investing in digital assets and cryptocurrency
call us now at (424) 289-8068.