“That’s Our Two Satoshis” — We Should Appreciate Bitcoin More, but it’s Not Defensive

What happened this week in the Digital Assets market
Week-over-Week Price Changes (as of Sunday, 7/04/21)

Bitcoin’s Monetary Policy is Truly Amazing
There is an incredible number of people who will find a way to discredit Bitcoin no matter the circumstance. There is also an incredible number of people who will find a way to champion Bitcoin no matter the circumstance. Both extremists lose credibility in our eyes, and anyone who is myopically focused on just Bitcoin (positively or negatively) is missing out on the true innovation of digital assets, which has quickly become a diversified and powerful asset class.
We are perhaps in the minority then, as we are very bullish on Bitcoin long-term, but also don’t find it terribly interesting or worthy of writing about most of the time. The narrative hasn’t changed (store-of-value, digital gold, inflation hedge), the asset itself hasn’t changed much (21 million fixed supply), and most of the news cycle centers around where and how to invest in Bitcoin (exchanges, leverage, wallets, regulatory changes, etc) rather than on Bitcoin itself.  Investing in Bitcoin is a binary bet, with the most likely outcomes either a) worth close to $0 or b) worth at least 25x todays’ value, and every price point in between is largely irrelevant in the grand scheme.  We are strongly in camp B, but think there is very little to say about how we get there that hasn’t been said a million times already.
That said, it is time to fully appreciate the beauty of Bitcoin’s antifragile design.   In the wake of the severe and coordinated clampdown from China, and the subsequent mass exodus of miners, hashrate and block speed fell dramatically.  In layman’s terms, this means less machines were online mining for Bitcoin, so there was less competition to earn rewards for solving a complex and random puzzle, which means the expected rate of return increased for those who were still able to mine.  As a result, Bitcoin’s difficulty adjustment automatically fell 28%, also a new record.  Again, in layman’s terms, this means it became easier and more profitable to solve this random puzzle, encouraging new participants to mine, and thus becoming more likely that block speed would increase as puzzles are solved faster amongst the remaining and new miners. While block times are coded to remain close to 10min/block, short-term volatile shifts in block times between difficulty adjustment periods (2016 blocks, ~14 days)  can lead to temporary shifts in block speed. In the coming weeks, old miners will likely pop back up again after relocating, which should increase hash rate further, increase competition, and increase the difficulty rate. Meanwhile, throughout all of these adjustments, Bitcoin itself suffered no downtime, a vast improvement over the technologically impaired fiat system. 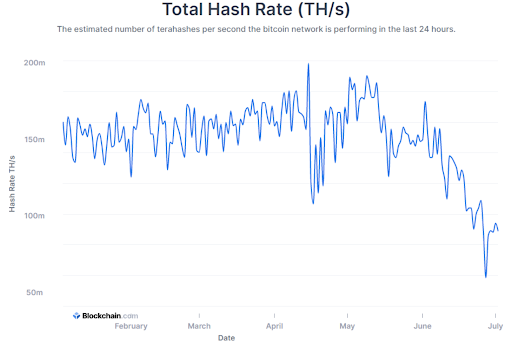 This monetary policy is automatic, and was built into the Bitcoin codebase over 12 years ago, with no committee or governors interfering.  It adjusts as needed to keep the network humming, and it works beautifully and simplistically.   Now compare that to the FOMC, OPEC, the G7 and every other governing body which makes completely arbitrary and polarizing decisions based on the opinions of a handful of elites, and you can begin to truly appreciate how revolutionary Bitcoin’s design really is.
Whether or not you believe in Bitcoin’s long-term success, take a minute to reflect on the beauty of code. And after said pause, you can get back to speculating on price (which by the way, generally does very well post a large difficulty adjustment since hash rate follows price, not the other way around).
That said, Bitcoin is not a “defensive asset”, even within digital assets
Defensive assets consist of more stable investments with steadier returns. Because they usually carry lower risk, defensive assets are more likely to generate lower levels of return over the long term, and we generally expect defensive assets to provide returns in the form of income.
That sure doesn’t describe Bitcoin… at all.
However, because this industry has evolved from a single asset (Bitcoin) to a multi-faceted asset class so quickly, there are still a lot of outdated, nonsensical and downright stupid narratives that remain in vogue simply because they became rhetoric before the asset class evolved.  One such narrative is “Bitcoin dominance”, or the percentage of the overall asset class represented by Bitcoin’s market cap.  Not only is this a metric that by definition has to decline over time (since there is only one Bitcoin, but there are thousands of new digital assets coming to market each year), but it also implies some inherent level of “safety” in Bitcoin over other digital assets. As a result, anytime the overall market starts to fall, we hear the same “rotation into Bitcoin because its defensive” chatter as if Bitcoin dominance must rise when other assets are falling, and presumably, Bitcoin will fall by less.
But ask yourself this. If cash-flow producing assets like those available today in DeFi, sports and gaming existed when Bitcoin was first created, would anyone say that a brand new store-of-value backed by the hashrate of the network is more defensive than these other yield-producing assets with stable customers and revenues?  Would you rather own a cryptocurrency like Bitcoin, or a DeFi token like SUSHI with a 14% dividend yield that books revenue and FCF every single day regardless of market cycle?  Would you rather own a digital currency like Bitcoin that is being pressured negatively by China, ESG, celebrity CEOs, Fed regime shifts and regulatory pressures, or a gaming token like AXS that is growing revenues exponentially, has equity support behind it, and the token is explicitly backed by the balance sheet assets of the company?
When we think about defensive assets like utility stocks, healthcare stocks, and US Treasuries, we’re inferring that these assets will perform well regardless of business cycle. There is nothing about Bitcoin that suggests this is true, whereas there are real companies and projects in other sectors of the digital asset industry that do exhibit these exact characteristics.  This narrative that Bitcoin is the defensive asset within digital assets is even more shocking considering Bitcoin is one of the worst performing digital assets YTD by a long shot, and it continues to underperform every bounce (like last week), while declining in line with the asset class during periods of stress.  The only thing Bitcoin seems to be defending against is profits.
There are a lot of broken, stale narratives that need to be revised now that this asset class has grown beyond just cryptocurrency.  In the meantime, Bitcoin-only investors who are hanging on to the past are taking a “flight to safety” towards missed opportunities from real growth and steady cash flows.
What’s Driving Token Prices?
What We’re Reading This Week
Point72 Seeks Crypto Head While Soros Starts Bitcoin Trading
Morgan Stanley Buys Over 28,000 Shares of Grayscale Bitcoin Trust
Billionaire Salinas Says He’s Working for His Bank to Be First in Mexico to Take Bitcoin
Cathie Wood’s ARK Invest, 21Shares Team Up to Enter Bitcoin ETF Race
SoftBank Invests $200 million in Brazilian Crypto Exchange Mercado Bitcoin
And That’s Our Two Satoshis!
Thanks for reading everyone!
Questions or comments, just let us know.
The Arca Portfolio Management Team
Jeff Dorman, CFA - Chief Investment Officer
Katie Talati - Head of Research
Hassan Bassiri, CFA - PM / Analyst
Sasha Fleyshman -  Trader
Wes Hansen -  Head of Trading & Operations
Alex Woodard- Analyst
Mike Geraci- Trader
Andew Stein, VP of Research
To learn more or talk to us about investing in digital assets and cryptocurrency
call us now at (424) 289-8068.