What Happened This Week in the Digital Assets Markets?
Week-over-Week Price Changes (as of Sunday, 4/25/22) 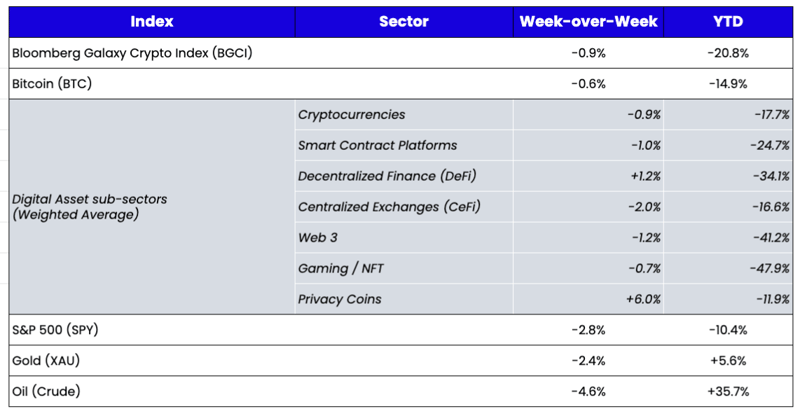 Source: TradingView, CNBC, Bloomberg, Messari
High Up-Capture and Low Down-Capture
Digital assets slightly outperformed traditional markets last week—a trend that will eventually matter when/if investors put money back to work. While the negative returns across digital assets, tech stocks, emerging market stocks, government, and corporate bonds all look quite similar in today’s macro/Fed-driven market, digital assets had amazingly high up-capture during good times the past three years, yet are showing very low down-capture during recent bad times. In other words, when a new asset class outperforms on the way up and on the way down, those characteristics will open eyes and eventually drive significant asset flows. Essentially, digital assets are providing the return that long/short equity and debt hedge funds have promised (and largely failed to deliver) for decades. 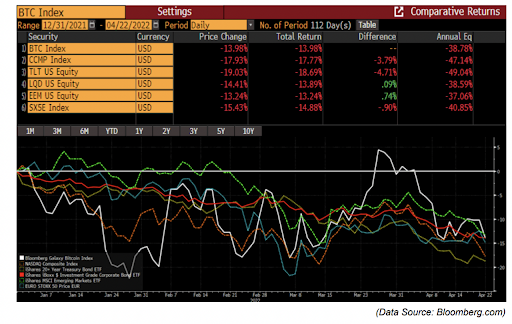 My Bank Forced Me Into DeFi
DeFi growth has been somewhat stagnant since November 2021. Activity has slowed amidst a dull, declining market, and the price of DeFi tokens has been straight down since peaking in February 2021. In addition, there has been a constant flow of hacks that have kept the media salivating over DeFi’s demise.
Though there are valid reasons to worry about DeFi, most concerns stem from those who have never engaged with it. If skeptics actually tried to use a DeFi application, they might be pleasantly surprised at how amazing it is. Last week, I was forced to turn to DeFi because traditional banking went silent on me during the course of an ordinary financial transaction. Here’s a detailed description of what happened to me (this account is from my personal experience and is not a reflection on, nor an official statement from, Arca):
So at this point, I was in a bind. I needed to make a payment immediately, but my hands were tied. My only hope was to use some of my investments as collateral to get a quick loan so that I could make a U.S. dollar payment. So here’s what I did:
Ultimately, I spent about 15 minutes getting a large loan at a low rate and sending that money across multiple venues to complete a verifiable financial transaction.  I am not engaging in money laundering, and it should not be overly complex for a bank to figure that out.
Now, I’ll admit this isn’t a perfect solution. It requires knowledge of the protocols and overcollateralization. But it is at the very least incredibly functional and helpful, especially when compared to the constraints of banks. Yet just this morning, Bloomberg journalist Joe Weisenthal wrote that crypto “does nothing,” only to pander to both sides of the extreme (crypto lovers and haters will give him a lot of attention for this), but he’s wrong. The use cases are evident, but most people don’t try them because they are scary, complicated, or unknown. 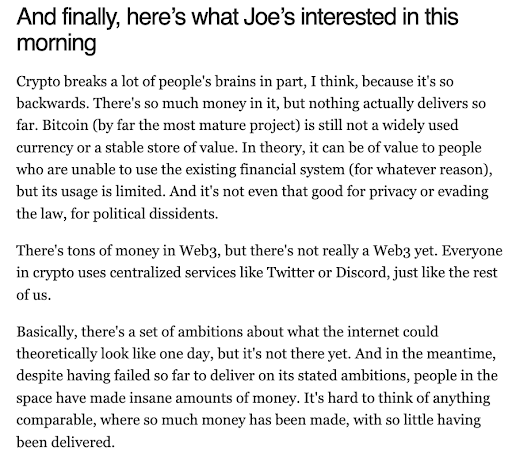 Source: Bloomberg email subscription from Joe Weisenthal “Five Things You Need to Know to Start Your Day”
I’ve been on record many times stating that February 2022 will be looked back upon as a major inflection point regarding how citizens across the world view their banks, brokerage accounts, and governments. Specifically, I wrote:

“Over the past six weeks, our society has discovered that money and stocks are not an asset—they are liabilities owed to you (typically by a broker or a bank). Whether or not you can ensure these entities pay you back in full is now in question due to recent activities in Canada, Russia, and the London Metals Exchange. This uncertainty has become a wide-reaching advertisement for ownership of bearer assets like digital assets.”