What happened this week in the Digital Assets market
Week-over-Week Price Changes (as of Sunday, 8/22/21) 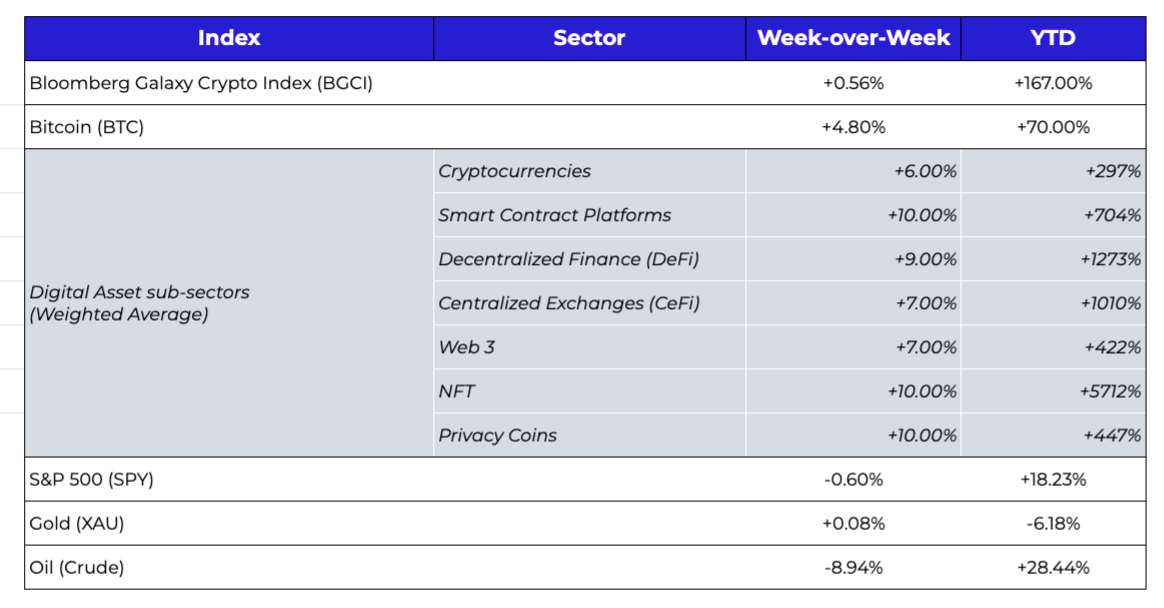 The Rise of Layer 1 Smart Contract Protocols
The digital assets market exhibited broad gains for the 5th straight week, and has now gained ground 7 out of 8 weeks since we published our “Debunking the Bear Market'' thesis at the end of June.  It’s been a remarkable run, one with which many market participants are still in disbelief at the speed and magnitude of the recovery.  While the two-month market rally started with strength in NFTs, last week’s gains were predominantly driven by smart contract protocols.
Ethereum, the largest and most heavily used protocol, has a commanding market share in terms of total value locked (TVL) in layer 1 smart contract protocols, with over 75% of the overall economic activity happening on chain.  Other than Binance Smart Chain (BSC), no other protocol has captured even 5% of the total activity.
Source: DefiLlama
Naturally, Ethereum (ETH) now sports a $388 billion market cap and has gained +353% YTD (and +749% over the last 12 months).  That of course would put Ethereum squarely in first twelfth place amongst other Layer 1 token YTD performances.
Wait, what?
Month-to-Date Performances of select Layer 1 Protocols 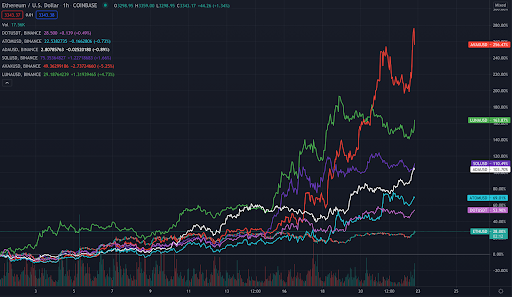 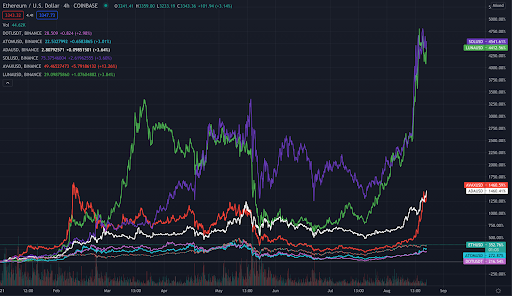 Source: TradingView
ETH gained +3% last week, but this paled in comparison to Solana (+75%), Luna (+73%), Avalanche (+87%), Polkadot (+23%), and Cosmos (+30%).   The run in alternative protocols was prompted by several prominent NFT drops in the Solana ecosystem, heavy usage of Luna’s UST stablecoin, and a $180 million liquidity mining program on Avalanche.  While most “Ethereum killers” have been the source of a lot of jokes for the past few years (the joke usually being that the ETH killer dies instead), for the first time, we actually have real activity happening outside of Ethereum. As our friends at Galaxy Digital pointed out:

“Solana and Luna, in particular, are seeing growing usage, partly on the back of prominent NFT and DeFi projects. Within days of the Degenerate Ape NFT launch, users transacted over 137,000 SOL (~$10M) worth of volume on the Degenerate Ape platform. This volume anchors a staggering 24B transactions processed on Solana over the last 18 months vs. 1.2B ETH transactions since 2015, showcasing the enormous throughput of Solana’s chain. [Additionally], last week saw the mainnet launch of Wormhole, a generic cross-chain messaging protocol supporting Solana, Ethereum, Terra, and Binance Smart Chain. This follows the launches of Avalanche Bridge and Neon EVM, an Ethereum-compatible environment on Solana, both over the past month. NFT activity continues to congest the Ethereum network and contribute to volatile gas fees, but these alternative platforms can help meet user demand especially if ERC-721 or ERC-1155 tokens are more portable between protocols.”

Ethereum is still dominant of course, but this is an industry built by venture capital investors, a group that constantly looks for the next best thing over what is currently the best.  Why invest in Apple and Amazon when “the Apple of X” and “the Amazon of Y” are out there somewhere?  This isn’t necessarily wrong, though it is somewhat shocking considering how many other “ETH killers” have been laid to rest in blockchain graveyards. But this industry is only a minute-and-a-half old in the long arc of technologies, and it is very possible that Ethereum will become the “MySpace of blockchain protocols” one day.  Or, more likely, this industry is simply large enough that all market participants are underestimating the total addressable market serviceable by blockchains, and therefore the number of winners that will ultimately emerge simultaneously.  For now, the growth of other chains is exciting investors, and developers alike.
Ethereum’s (Purple) Dominant Market Share of Total Value Locked (TVL) Has Begun to Decline

Source: DefiLlama
How Paradigm Saved Sushiswap and its users from a large hack
The transparency and open-source nature of the digital asset industry places it under constant surveillance, from regulators, developers and investors.  Most of the time, there is no need for subjective analysis as the facts and data are objective, and available to everyone who knows how to find it and interpret it.  But a select few media outlets, politicians, regulators and market pundits often go out of their way to paint a subjective picture of fraud, theft and general tomfoolery.  For example, last week, Minnesota Fed President Neel Kashkari said, “cryptocurrency is 95% fraud, hype, noise and confusion.”
First, this is an absurd statement.  At Arca alone we collectively spend thousands of hours per week analyzing and studying the different facets of the digital assets market, and have built a substantive multi-faceted business while easily ignoring and dismissing the VERY small part of the industry that has to do with fraud, hype, noise and confusion.  And hundreds of other growing businesses are doing the same thing.  But this statement from Kashkari does in fact capture the embodiment of a large portion of the world.
Which is why it is so remarkable that this story didn’t get more coverage.
In short, one of our favorite projects, Sushiswap, had a potential $350 million exploit thwarted by the efforts of a venture capital investor who happens to be one of the lead investors in Sushiswap’s main competitor, Uniswap.  Read that again… a person incentivized to see Sushiswap fail, quietly and privately saved the project from embarrassment and potential harm, and saved thousands of users from a potential hack.  There was no reward.  There was no fame.  There was no coverage.  This was just another member of the large digital asset community doing what was right for the industry.  Sam and Paradigm should be paraded around the metaverse, but instead, they went right back to work, as did thousands of other do-gooders in this space.  This is a remarkable display of self-policing.
Meanwhile, SEC Chairman Gary Gensler has been on the offensive lately, stirring quite a bit of controversy not only from digital asset enthusiasts, but also from competing regulatory bodies like the CFTC.  Gensler also recently suggested that digital assets participants need a “cop on the beat”.  In a recent video, Gensler said  “At the heart of finance is trust, and trust rests on investor protection.”  It’s perhaps worthwhile to note however that the only people calling for more cops to protect them are the people from other neighborhoods who spend most of their time talking about how unsafe it is in the faraway neighborhood that they spend no time in.  The entire digital assets industry is built upon an inherent trust of the technology and the transparency that comes with public blockchains.

Source: Twitter
We have been on record many times that we welcome thoughtful regulation of digital assets.  But at the same time, we don’t necessarily believe that this industry needs the same old solutions that were created decades ago for other regulated marketplaces.  Most people aren't anti-regulation… they are anti-stupid and outdated rules that don’t actually help anyone in need, such as:

Digital assets are starting to create better solutions.  Those in the industry are spending fortunes funding amazing projects, and are doing everything they can to police it themselves as it grows.  We have amazing volunteer digital citizens on patrol, from decentralized autonomous organizations (DAOs), to volunteer white hackers, to investors policing the projects they invest in, to good old fashioned public pressure and the court of public approval.   There’s a reason Arca has spent months talking about the social and governance aspect of ESG, rather than the environmental aspect -- this is perhaps the most socially responsible and governance friendly industry ever created.  There are so many positive and encouraging stories happening in digital assets, buried beneath the headlines from Gotham.
The digital assets industry has more of a marketing and perception problem than a crime problem.
What’s Driving Token Prices?
While Layer 1 protocols stole the show, we saw continued strength elsewhere:
What We’re Reading This Week
Walmart is Looking for a Crypto Product Lead
DeFi DemystiFied, Report from CoinShares
White Hats Just Defused a Potential $350M Heist on SushiSwap
Mike Novogratz’s Galaxy Digital Files for a Bitcoin Futures ETF
'Novi is Ready to Come to Market,' says David Marcus as Diem's Future Remains Uncertain
And That’s Our Two Satoshis!
Thanks for reading everyone!
Questions or comments, just let us know.
The Arca Portfolio Management Team
Jeff Dorman, CFA - Chief Investment Officer
Katie Talati - Head of Research
Hassan Bassiri, CFA - PM / Analyst
Sasha Fleyshman -  Trader
Wes Hansen -  Head of Trading & Operations
Alex Woodard- Analyst
Mike Geraci- Trader
To learn more or talk to us about investing in digital assets and cryptocurrency
call us now at (424) 289-8068.