“That’s Our 2 Satoshis” — Is Bitcoin a Store of Wealth or Excess Wealth?

What Happened This Week in the Digital Assets Markets?
Week-over-Week Price Changes (as of Sunday, 07/03/22) 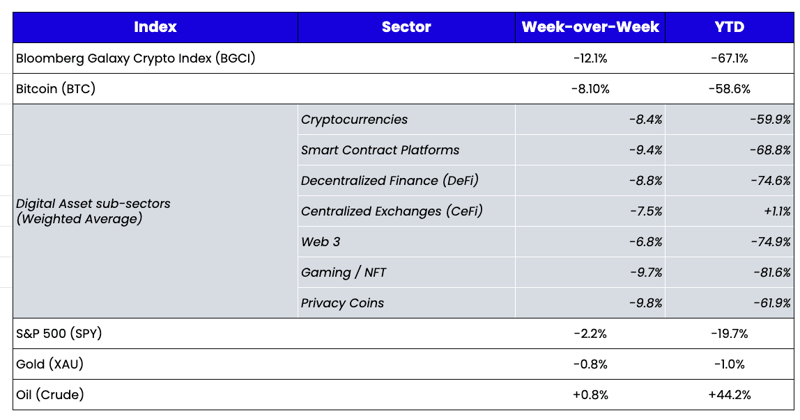 Source: TradingView, CNBC, Bloomberg, Messari
The End of a Very Bad Quarter
The end of calendar quarters is a somewhat arbitrary point-in-time reference; we’ve rarely written about them because they are fairly irrelevant for digital assets that don’t have standardized reporting or earnings. But these past two quarters were so historically bad that it’s hard not to pause and reflect. 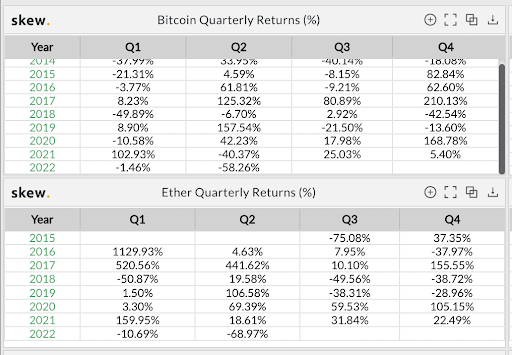 Source: Deutsche Bank
There will be a day when macro no longer dominates the conversation, but for now, we are still hanging on every word from the Federal Reserve governors and each economic data point. The silver lining is that the bond market no longer seems to believe the Fed, as Fed Fund Futures are beginning to price in much fewer rate hikes (or at least much faster rate cuts), which led to a near 50 bps rally in the 10-year Treasury yield in the past few weeks and a sharp decline in inflation expectations. The reason for the optimism is pessimism, as every major economic indicator is now rolling over. The Institute for Supply Management (ISM) said manufacturing activity in June was weaker than expected, with its index of national factory activity dropping to 53 for the month—the lowest reading since June 2020. ISM’s new orders index also fell to 49.2 from 55.1, showing contraction for the first time since May 2020. Commodities are also dropping, with natural gas down more than 30%, copper down more than 20%, and wheat down more than 21% from recent highs. Further, the precipitous drop in personal consumption expenditures on goods in the U.S. and falling savings rates indicates inflation may have already peaked.

Source: Fred
Bad news is good news again for markets but is very bad for individuals’ and companies’ day-to-day lives and operations.
DeFi Versus CeFi Bankruptcies
In the last few weeks, we’ve highlighted how DeFi applications are weathering this storm much better than their centralized lending and exchange counterparts, as transparency and automation are proving to be necessary defense mechanisms compared to opaqueness and human error. Bitmex co-founder Arthur Hayes and Axios writer Brady Dale echoed this sentiment in recent articles. Hayes wrote:

“There is nothing new or innovative about how these lenders became insolvent. For as long as there have been centralized lending businesses, there have been epic failures such as what this crop of crypto lenders experienced in this circumstance. The technology that underpins cryptocurrencies and DeFi has nothing to do with why 3AC and these lenders got into trouble. But what’s conveniently going unmentioned by much of the media is that both centralized and decentralized lending companies/platforms had exposure to 3AC—and only the players in one of these two markets went belly up. The centralized lenders failed en masse, while their decentralized counterparts liquidated collateral and operated with no hiccups. The only information that these protocols have about a lender and borrower is their Ethereum wallet address. To them, 3AC is just an address with a balance. It is not a collection of humans with a certain pedigree that indicates they can and should be trusted to pay back what is owed even when no collateral is required upfront. I will repeat: these lending protocols are designed with the explicit goal of removing the need for trust from the lending equation."

Hayes articulates why these DeFi protocols are working so well and why they are crucial to the future of finance. Predetermined bias is removed. Race doesn’t matter. Income doesn’t matter. Physical location doesn’t matter. It’s credit-based, with a surefire mechanism in place if collateral falls below a certain threshold.
Similarly, we recently wrote about how LUNA’s out-of-court restructuring was a very different process and outcome than a typical bankruptcy filing. At the time, we had no idea that we were about to test this thesis with a slew of impending bankruptcies and restructurings from Celsius, Three Arrows Capital, Babel Finance, Voyageur, BlockFi, and many others. The U.S. bankruptcy court process typically protects depositors, employees, and creditors at the expense of equity holders, which is a good outcome. But the high costs and long restructuring times needed to achieve these outcomes are not optimal. On the other hand, the Luna “restructuring” took less than 2 weeks, and may achieve the same outcome. Is this better? It’s not entirely clear, but it is amazing to see a process like this play out in a clean and expedited way.

Source: Twitter
As we move through this restructuring period, it’s clear that “loan-to-own” will make a strong appearance. While historically, crypto-native lenders have been very accommodating to miners and other borrowers when they get in trouble, recent loans from FTX, Alameda, and other TradFi distressed funds will not be as flexible. When a borrower defaults, these new lenders will look to push these companies into bankruptcy to take the assets versus the crypto-native lenders that did everything they could to keep their customers afloat and functioning under revised, flexible terms.
The takeaway: DeFi and CeFi are very different, and we will continue to see these real-time case studies play out over the next few months.

Is Bitcoin a Store of Wealth or a Store of Excess Wealth?
Former PIMCO executive and current Arca advisor and investor Bill Powers recently said, “We’re about to find out if Bitcoin really is a store of wealth or if it was just a store of excess wealth.”
Over the past decade, we haven’t had to distinguish between the two, but with central banks on the warpath to stamp out inflation via negative wealth effects, we may soon find out. So far, the evidence is pretty damning. Bitcoin does not like financial tightening. 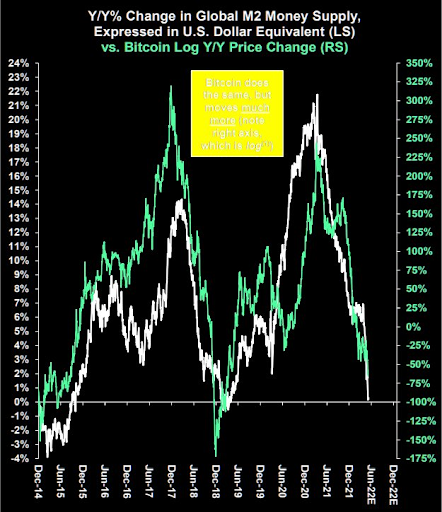 Source: Delphi Digital
Does this mean the Bitcoin thesis is dead? Almost certainly not. In February and March 2022 alone, the Canadian government shut down banking access to many of its citizens over a protest, Russian President Vladimir Putin created hundreds of billions of dollars of losses in weeks due to an almost 50% decline in the Russian stock market, Western Allies barred Russia from SWIFT, and the London Metals Exchange unilaterally canceled trades. These actions are likely to lead to the adoption of Bitcoin for decades to come. Moreover, history suggests that “Bitcoin is dead” is a cyclical and short-lived thought. 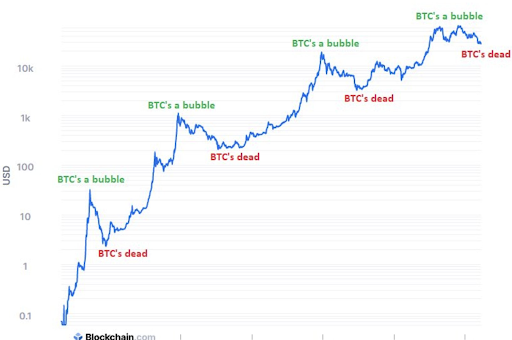 Source: Twitter
In fact, NYDIG recently observed that Bitcoin drawdowns, and the accompanying “doom and gloom” response, are becoming less pronounced every cycle. They noted:

“The return from the start of each cycle to its peak has declined with each successive cycle. First, this makes sense as the sheer market size of Bitcoin prohibits prices from keeping up the same percentage returns from cycle to cycle. Second, even though these cycles have typically ended with drawdowns of over 80%, the magnitude of these drawdowns have lessened over time.”

Bitcoin is likely just a call option on a future where Bitcoin is used for something, and its price is, therefore, a reflection of the increased or decreased probability of eventual adoption. But until that day, Bitcoin may simply be a store of excess wealth. So as long as you believe that excess wealth will once again return, Bitcoin is probably a good asymmetric call option.
What We’re Reading This Week
Bankman-Fried’s FTX Is Seeking a Path to Buy Robinhood
Music Streaming Company Napster To Launch Its Own Token On Algorand
EU Agrees on Landmark Regulation to Clean Up Crypto 'Wild West'
SEC Rejects Grayscale’s Spot Bitcoin ETF Application