What happened this week in the Digital Assets market
Week-over-Week Price Changes (as of Sunday, 10/03/21) 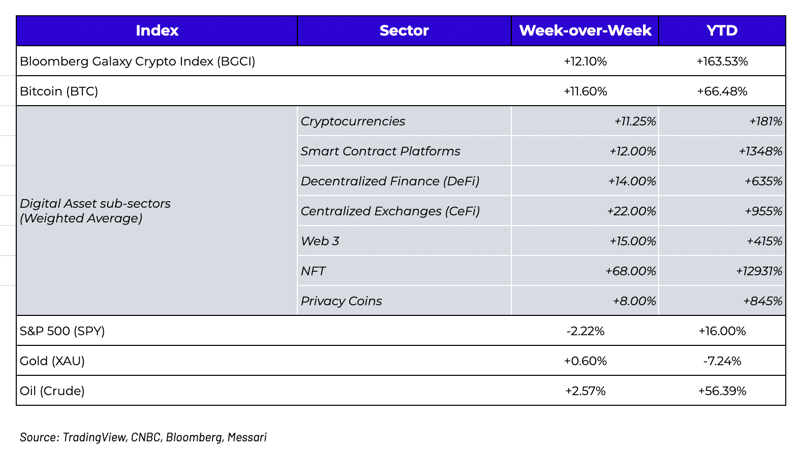 “Uptober” Starts with Strong Institutional Fund Flows
It’s always challenging to write a weekly update that straddles a month- or quarter-end.  Last week brought the end of September, a month where the VIX rose over 40%, the US Dollar gained almost 2%, US Treasuries lost 1.2% (yields rose 18 bps), the S&P 500 declined almost 5%, and the Bloomberg Galaxy Crypto Index fell 11%. The last few days of the month were equally unpleasant, as a myriad of negative headlines from Washington and China elevated downside risks.
The digital asset market eagerly awaited the start of “Uptober”, and like a flip of a switch, we were off to the races.  Week-over-week, digital assets soared, driven by the first few days of the new month, leaving September in the rearview mirror.  This may look like a self-fulfilling prophecy, as every digital asset investor has keyed in on the below chart, which shows September is historically the worst month for Bitcoin while October (and really all of the 4Q) is typically the strongest. But it’s actually a continuation of a trend we’ve seen all year.
Bitcoin Returns by Month since 2009 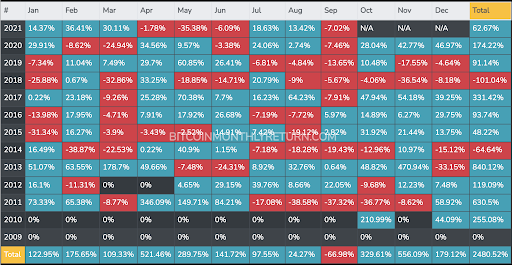 Source: https://www.bitcoinmonthlyreturn.com/
The table below shows the returns of the Bloomberg Galaxy Crypto Index for the first 10 days of every month this year compared to those of the rest of the month. The data is quite eye-opening. In 7 out of 9 months this year, the first week has drastically outperformed the remainder of the month, with only one instance all year of a poor start that was subsequently reversed.  While the BGCI is heavily weighted towards Bitcoin and Ethereum (80%), and is no longer a great representation of the broad and evolving digital asset market, it does shed some light on institutional fund flows.
Bloomberg Galaxy Crypto Index Returns by Month in 2021 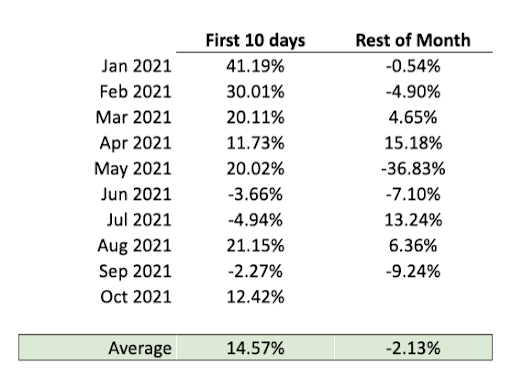 Fund flows into digital assets are notoriously difficult to estimate.  There is a lot of data on Bitcoin and Ethereum ETP fund flows, but these have largely been in decline all year. Much of the decline stems from a lack of offsetting inflows into Grayscale, which is a shell of its former fundraising self now that the “Grayscale arb” has gone away (GBTC and ETHE trade at a discount to NAV, meaning the two products no longer have inflows because it’s cheaper to buy publicly traded shares at a discount than it is to subscribe to new shares of the Fund at NAV).  But what doesn’t show up in the publicly available fund flow data is the record-breaking amount of money pouring into Venture Capital funds, hedge funds, and direct purchases of digital assets via Fidelity, Coinbase and others. These beginning of the month bumps in price are primarily driven by these untrackable fund flows.  Ask any OTC dealer who specializes in digital assets or any liquid digital asset fund manager and they’ll all point to significant and constant monthly inflows.
A market filled with 4Q hope combined with an influx of cash is a good recipe for a strong start to the month.
What about the Debt Ceiling and Macro Concerns?
It seems we’ve been climbing a wall of worry since late last year, and it is getting larger by the minute. We have an energy crisis, supply chain issues, higher inflation, signs of weaker growth, and lots of talk about stagflation.  Today, the market is once again focused on “what ifs” as it pertains to political theatre.  Last Thursday, President Biden signed a nine-week stopgap funding bill that averts a government shutdown, but the US could still default in a few weeks if we don’t raise the debt limit. Treasury Secretary Janet Yellen warned lawmakers last week that if Congress fails to raise, or suspend, the debt ceiling, the federal government may default by October 18.  Due to Washington dysfunction, the market is pricing a 39% chance that it will be raised. Meanwhile, USA CDS has gapped wider, mirroring what happened during the 2015 debt ceiling fiasco. 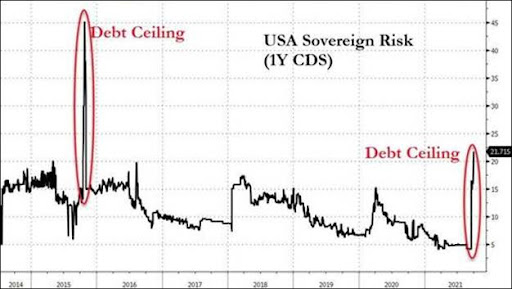 Source: Zerohedge
We’ve discussed moral hazard before, but this is as good as it gets.  Virtually no one actually thinks the US will default on its debt, and yet, we kind of have to assume that they will in order to push markets into a temper tantrum that will ultimately give politicians the ammunition they need to do what is inevitable anyway.  We’ve been raising debt limits and kicking the can down the road for nearly half a century, and it’s highly unlikely that anything will change this year. 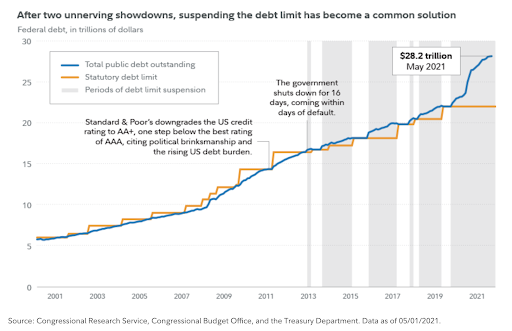 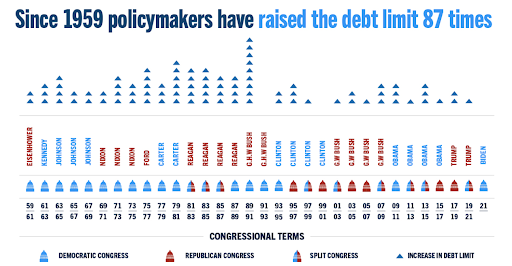 Source: PGPF
What has changed this time around relative to other episodes, however, is the complete lack of trust in governments and financial institutions around the world.  And while this may not actually be new, there is more public data available to the masses that point-blank incriminates the establishment, and a much faster public court of opinion system that quickly spreads this information.  Robinhood and Citadel were caught red-handed in a case of trading on material non-public information, two Fed governors were forced to resign over insider trading scandals, and congressmen are being heavily scrutinized for lack of ethics.  Just yesterday, we were also thrown the Pandora Papers which shows a level of corruption that we already suspected, but confirms our collective mistrust.
If you’re wondering why digital asset participants are so eager to fight the establishment, this is a big reason.  As mentioned last week, participants across the digital asset ecosystem are expressing constant frustration with regulators who seem to be placing fire extinguishers all over this new industry while their own backyard is on fire.  But as the digital asset industry strengthens its lobbying efforts, adds to its list of powerful and influential investors, and continues to build some of the most well resourced companies, we can expect a very public battleground in the 4Q and beyond.
In the meantime, markets will pretend to remain hostage to a political dance that has already been choreographed.
Stewards for Positive Change
A few weeks ago, we wrote about transparency, and how the exchanges themselves were just as guilty as token issuers for their role in obvious mis-priced token offerings.  A few days later, Coinbase took some ownership over their own egregious and malicious practices that catered to VCs at the expense of basic transparency for investors by implementing a new and more fair listing process for tokens.  While we recognize that this was not a direct response to what we wrote, it’s timely nonetheless, and we applaud Coinbase for recognizing a mistake and attempting to fix it.  We can, and will, self-police this industry regardless of whether or not a new regulatory framework is released.
What’s Driving Token Prices?
What We’re Reading This Week
Crypto Exchange Huobi to Cease All Mainland China User Accounts
Alibaba Says it will Block Sales of Cryptocurrency Mining Equipment Starting Next Month
CoinGecko, CoinMarketCap, TradingView Now Blocked in China
Robinhood Crypto COO, CTO Hint That DeFi Features Are Coming
Kraken Fined $1.25 Million for Offering Illegal Bitcoin Products
Visa Working on Interoperability Platform for Stablecoins, CBDCs
El Salvador Has Started Mining Bitcoin with Volcanos