“That’s Our 2 Satoshis” — These Tape Bombs are Frustrating

What happened this week in the Digital Assets market
Week-over-Week Price Changes (as of Sunday, 9/26/21) 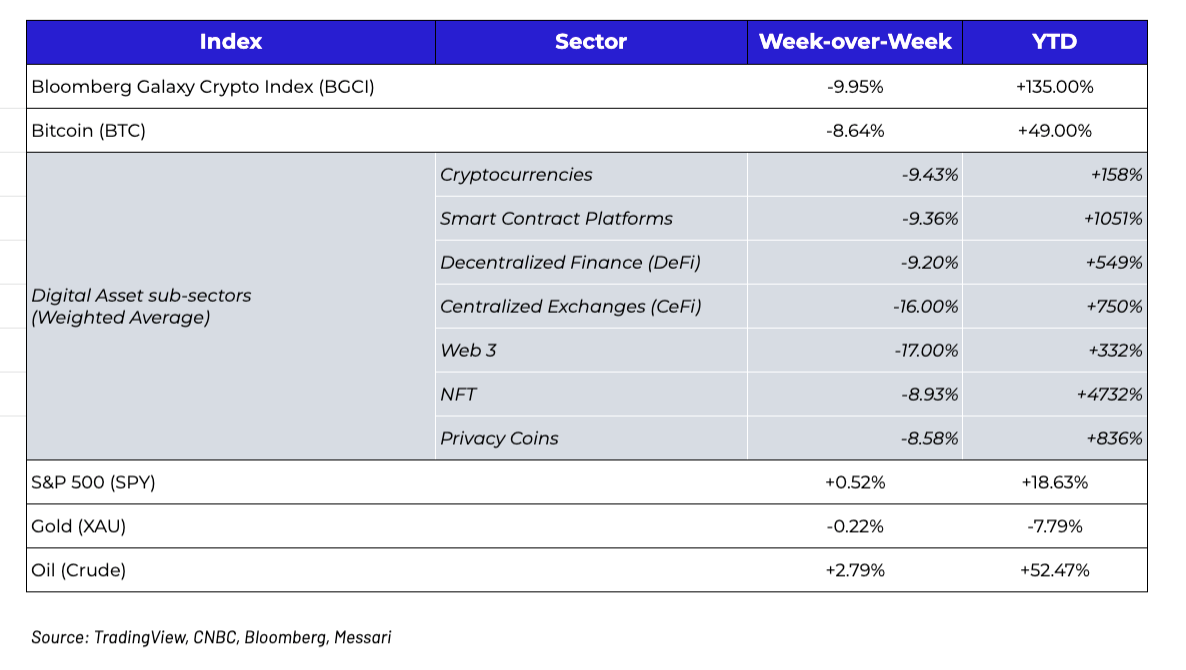 Short-term Fear Versus Long-term Optimism
It was an ugly week for digital assets across the board.  Monday kick-started the risk-off sentiment as global equities, credit and digital assets sold off together following an expedited timeline to the slow-moving, year-long Evergrande default. Monday’s move caused an increase in the “all risk assets are correlated” chants, but this was quickly shot down when equities bounced back to finish the week in positive territory while digital asset losses accelerated into the week upon the release of more restrictive Chinese and US regulatory headlines.  Early in the week it was difficult to pinpoint which headlines were causing the most market discomfort, but by week’s end it was clear risk assets were largely shrugging off concerns over contagion risks from Evergrande, a Federal Reserve pullback in stimulus, and the debt ceiling political theatre, and instead focused exclusively on China’s latest crackdown on digital assets and SEC chairman Gensler’s assault on intermediaries.
Before we get into China and Gensler, it’s worth highlighting that many market participants went into September expecting greater volatility, as historically, September is one of the worst months for digital assets and equities.  The market has not disappointed, as we’ve already seen four 10% peak-to-trough declines in digital assets this month. 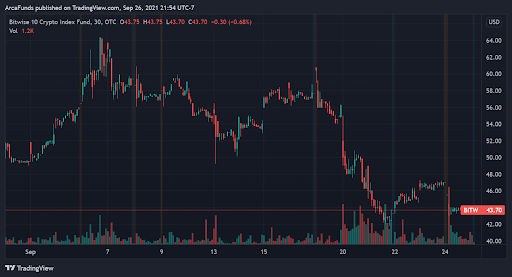 Source: TradingView
This volatility and overall weaker market sentiment is eerily similar to that of Sept/Oct 2020, exactly one year ago. At that time, uncertainty was also looming, and price was a reflection of that overhang:
Of course, once these risks subsided, the 4Q of 2020 put up one of the greatest quarterly performances for digital assets we’ve ever witnessed. 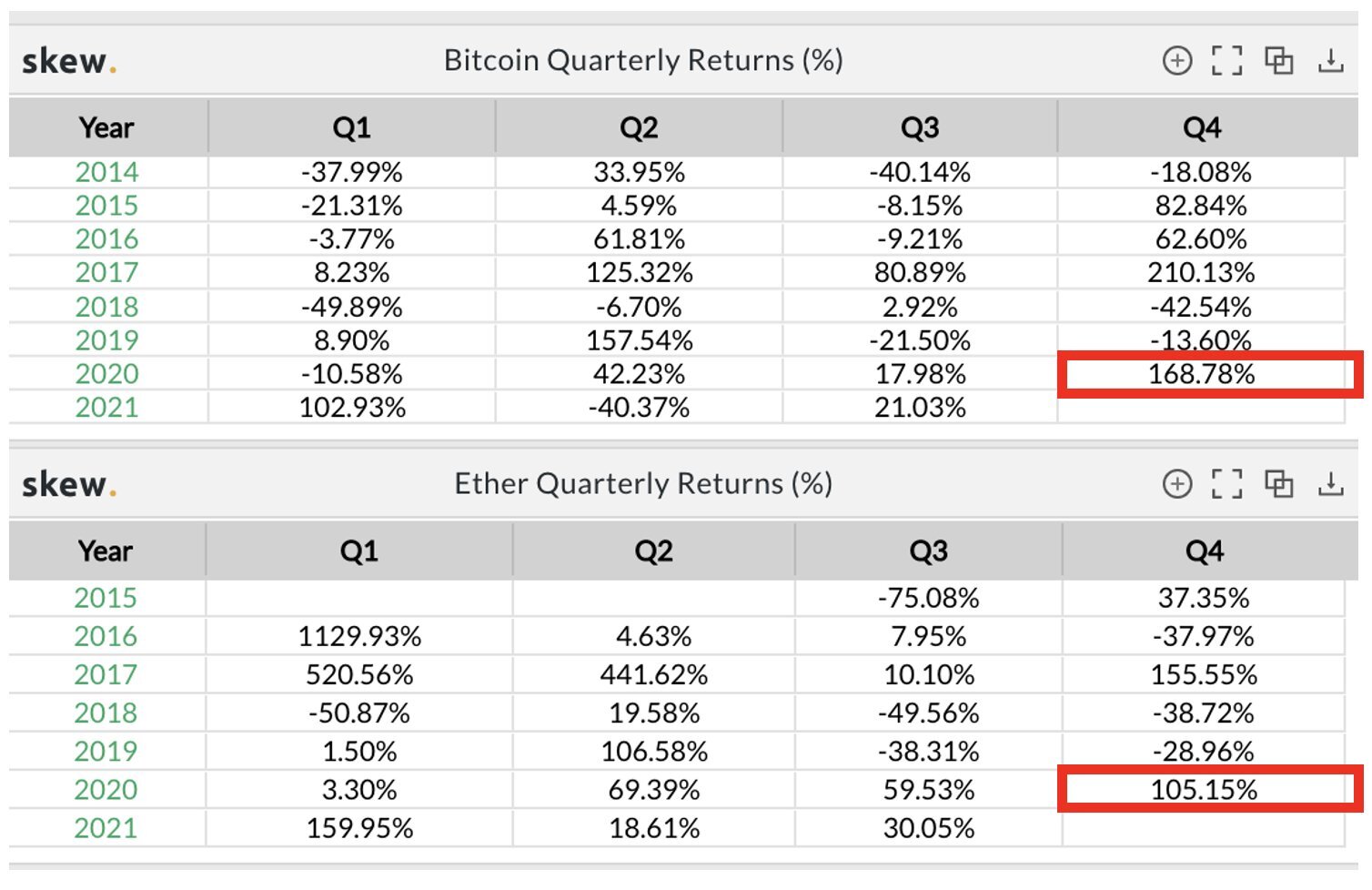 Source: Skew
Similarly, we can compare today’s market environment to that of just three months ago, where a wall of worry sent digital assets down 40-80% even though each of the factors contributing to this selloff turned out to be much ado about nothing. Once again, markets rallied sharply after each one of these risk factors subsided.  In fact, the single most bullish thesis in digital assets currently is that almost all of the bear theses are actually long-term positives:
This, combined with the fact that the 4Q is typically one of the best quarters for digital asset prices and that fundamentals remain strong across alternative Layer 1 chains, DeFi, gaming and NFTs, has most digital asset investors feeling pretty bullish despite the September downside volatility.  And the options market reflects this short-term nervousness / long-term bullishness.  Skew, which is a measure of how expensive calls are relative to puts, is showing a large divergence between short-term weekly/monthly fears (positive skew; puts more expensive than calls) and long-term 3-6 month bullishness (negative skew; calls more expensive than puts).   Using Bitcoin as a proxy for the market, you can see this dichotomy (yellow/blue = short-dated, red/green = long-dated).

Source: Skew
When so much negativity and uncertainty is built into prices, it doesn’t take much to quickly reverse in the other direction.
The Barrage Of Headlines Are Frustrating To The Space
SEC Chairman Gary Gensler commented about digital assets again last week, with another speech focused on regulating stablecoins and intermediaries.  On the other side of the world, China reiterated its ban on digital assets, digging deeper this time with more enforcement and coordination from various parties. Both actions caused dips in prices; neither action was new.
Starting with China, there isn’t a lot to be said that hasn’t already been said… because this has been going on for years.  That doesn’t mean it’s not important.  Attempting to cut off access to 18% of the world’s population certainly isn’t a positive for growth and adoption.  But there is a collective yawn from market participants when it comes to China headlines.

Source: Twitter
Many have been quick to point out how little the long-term effect has been from China technology bans.
Source: Twitter and Twitter
Many were hoping that the US would counter China’s policies with a more crypto friendly regulatory environment.  Unfortunately, the US regulatory stance still remains unclear with Gensler repeating his reservations on several key areas of the digital asset space.
There is a sense of real frustration within the digital assets industry right now.  The diverse market participants, which include innovators, free-lance developers, investors and consumers, feel that they have built a $2 trillion+ industry from scratch with minimal input from regulators, yet are now at the mercy of a constant barrage of confusing and often contradictory headlines. Now that doesn’t mean digital asset companies believe regulation isn’t important. It is, and it is inevitable, and it will likely make the industry bigger, better and stronger.  But until a clear framework is crafted to govern this new technology correctly, there is a feeling of anger against headlines that seem to be focused on condemning projects to prove a point instead of providing transparent guidance.
The frustration, and  felt by the industry is summed up by CEO and Co-Founder, Ryan Selkis, of the digital asset research firm Messari:
Source: Twitter & Twitter
Raoul Pal succinctly summarized what is at play here for the United States, and what this political posturing will likely lead to.  But in the meantime, from an investing standpoint, there is no question that these headlines are weighing on market direction and depressing growth multiples.  Not only do we have price risk from every headline, but this single point of contention is keeping trillions of dollars on the sidelines, waiting to enter the market as soon as there is greater clarity.  I would estimate that at least 75% of investors who speak with Arca ask some variation of “what about regulation?”.  So here is my answer as it stands today.
Q: How worried am I about China and US regulation?
A: I'm not, at all
Every aspect of digital assets has perfect substitutes, which means random and inconsistent bannings, and selective crackdowns, will have no impact until we get new and clear laws. And this will take years to happen.  In the meantime, if the US wants to make an example out of certain tokens, or certain companies, or certain protocols, it will be terrible for those invested or employed in those specific projects, and completely meaningless from a broader investment perspective.  For example:
There is simply no single point of failure in this industry because everything has a perfect substitute.  From an investing standpoint, that means you can still invest based on growth, traction, adoption, interest, revenues -- all of which is telling you to own and use digital assets -- and not worry too much about the overreaching hand of regulators.  For those who continue to wait it out, you may time it perfectly.  But you may also miss out on a decade of gains caused by a secular shift towards this technology over fears that will likely prove to be pretty meaningless in the long-run.
Generally, people don't avoid going outside every time they see a cloud in the air.  When it actually rains, we grab an umbrella and traverse an appropriate path.  Investors in this space should take a similar approach.
Markets are Acting Rational (Except for Bitcoin)
Amidst all of the noise, it is comforting to see that most areas of digital assets are reacting rationally to the news.  For example, on Sunday, Binance and Huobi both took further measures to restrict mainland China customers.  Naturally, Huobi’s token (HT) fell -38% on the news, while competitors like FTX saw its token (FTT) rally +8%.  Decentralized exchanges stand to benefit most from the exodus of Chinese exchanges, and these tokens rallied the hardest.  Rational responses are a sign of maturing markets.
But Bitcoin continues to defy logic.  All of the risk factors that led to uncertainty in the market should have been catalysts for Bitcoin to go higher:
The fact that Bitcoin continues to struggle amidst what should have been a positive backdrop is more indicative of the new players in the game rather than the asset itself. It's a tad ironic that the Bitcoin community welcomed institutional interest as a sign of adoption, yet BTC is being held back by these same funds who now use BTC as a more liquid, higher beta, 24/7 risk proxy.
For better or worse, at the moment, Bitcoin has basically become a better version of the VIX.
What’s Driving Token Prices?
What We’re Reading This Week
Stablecoin Feature in New York Times Signals Regulation Is Comin
US’s Binance Probe Expands to Examine Possible Insider Trading
Twitter Adds Bitcoin Tipping, Pushes Further Into NFTs
Robinhood Doubles Down on Cryptocurrency with New Wallet Offering
And That’s Our Two Satoshis!
Thanks for reading everyone!
Questions or comments, just let us know.
The Arca Portfolio Management Team
Jeff Dorman, CFA - Chief Investment Officer
Katie Talati - Head of Research
Hassan Bassiri, CFA - PM / Analyst
Sasha Fleyshman -  Jr PM / Special Situations
Alex Woodard - Research Analyst
Andrew Stein - Research Analyst
Nick Hotz, CFA - Research Analyst
Wes Hansen - Director of Trading & Operations
Mike Geraci -  Trader
Kyle Doane -  Trading Operations
David Nage -  Principal, Venture investing
Michael Dershewitz -  COO of Arca Funds
To learn more or talk to us about investing in digital assets and cryptocurrency
call us now at (424) 289-8068.