What happened this week in the Digital Assets markets?
Week-over-Week Price Changes (as of Sunday, 9/13/20)
Source: TradingView, CNBC, Bloomberg
The Equity Temper Tantrum is Here -- And Here Comes the Stimulus
US equities declined for the second straight week, as technology stocks experienced their worst pullback since March. The Nasdaq lost 4.1% week-over-week, leading the technology index roughly 10% below its all-time high reached just six trading days ago. To put this in context, the entire market capitalization of liquid digital assets is $340 billion -- Apple (AAPL) alone lost $340 billion in market cap in the first 10 days of September. Even though the VIX finished the week at 27, it approached 40 earlier in the week, an indication that volatility may be here to stay for the remainder of the year.
There was no single catalyst for the move lower, however, broad valuation concerns, skepticism about a compromise on a coronavirus stimulus package before the election, and signs of slowing progress in the labor market all contributed to the negative sentiment.   Two months ago, we pointed out that it would likely take an equity temper tantrum before Congress acts. Methinks Congress will be acting soon, and so does the market, which is why the VIX got slammed lower even as equities slid throughout the week. Moral hazard never left, but it’s definitely back. 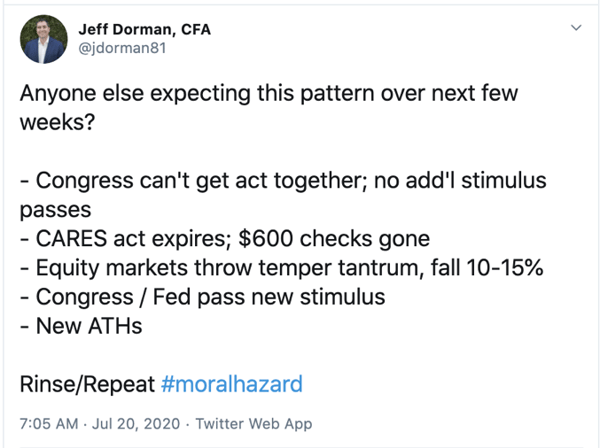 Correlations and the VIX
The digital assets market has seen its fair share of volatility too. While Bitcoin ended the week basically unchanged, the week-over-week moves in other digital assets, most notably those tied to Ethereum and Decentralized Finance (DeFi), were not for the faint of heart. Of 209 tokens with a market cap greater than $25 million, over the past 7 days, 44 rose 10% or more while 22 fell over 10%. The DeFi index has traded in a 40% range since the beginning of September, including back-to-back 15%+ moves on weekends.
The “DeFi Perpetual Swap” Index, courtesy of FTX 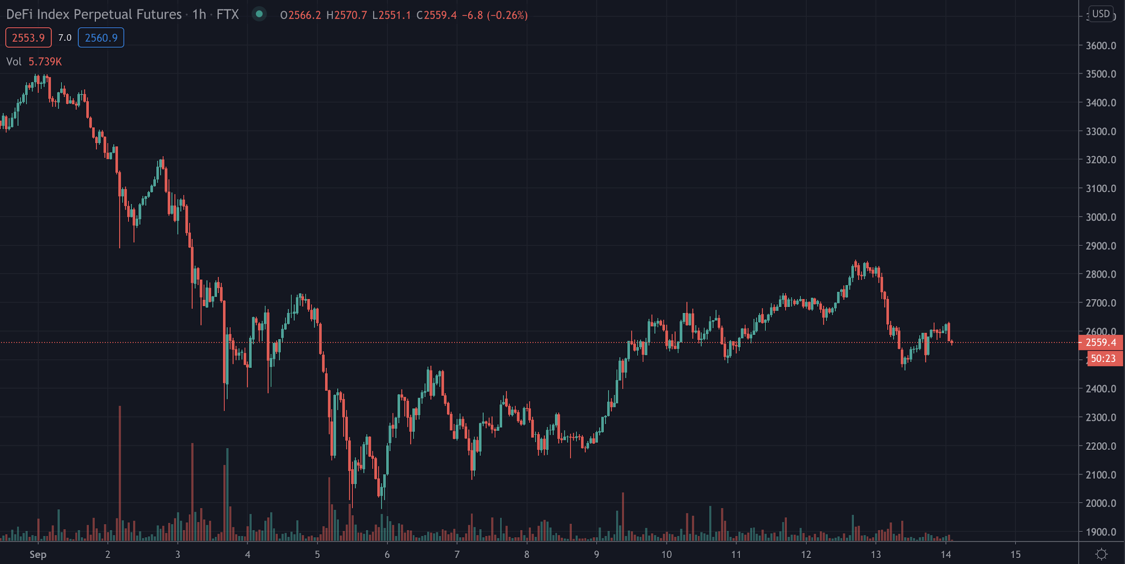 Source: FTX
But while overall volatility is on the rise, inter-asset correlation is actually on the decline. Unlike the prior week when digital assets fell victim to old habits with a ferocious “student body left” broad-based decline, this past week showed just how far the digital assets market has matured in recent years. Of the 209 tokens in our universe, 118 gained week-over-week, while 91 lost value.   Further, the market even differentiated between assets within the same sector, as just about every sub-sector of digital assets showed similar price dispersion. While many digital asset naysayers like to point out how correlated “cryptocurrencies” are with each other, the data is now telling a completely different story. Bitcoin has become a macro asset, tied more to the fates of risk assets than to other digital assets, while the evolving digital asset universe has become a collection of idiosyncratic projects and companies. That’s tremendous progress, and very encouraging for research-based investing.
Back to Bitcoin, we were particularly interested in how Bitcoin has reacted during other periods when the VIX has risen above 30, as this has historically been a level that market participants have focused on. Our assumption was that Bitcoin always acted as a risk-asset whenever other markets saw heightened volatility. But even that was wrong. Below is every instance when the VIX has risen above 30, and how BTC reacted (or didn’t):
Once again, pretty inconclusive data for Bitcoin. This constant correlation jumping is driving quant funds mad this year, as models break down seemingly every week. As discussed last week, Bitcoin has recently latched onto its newfound correlation with equities, but that too will likely disappear over longer time horizons (and is already dissipating). Our friend Noelle Acheson of Coindesk went even deeper discussing the on-again, off-again Bitcoin correlations and why we care so much.

This grasping for data to back a story reveals our very human need to put bitcoin in context of things we’re already familiar with. If it goes into a certain mental box, it’s easier to understand and easier to make decisions about. Boxes are comfortable. Yet, in the long run, they are unsustainable. For short-term market movements, what we think bitcoin’s narrative is doesn’t matter as much as what other people think bitcoin’s narrative is. Other people move the market, so we should know what asset framework they’re using. For long-term market movements, correlations matter more for portfolio diversification than for anything else. In the not-too-distant future, markets will hopefully be less confusing and even short-term covariance and other relationships might be steadier, and easier to use for planning purposes. By then, even bitcoin’s correlations might start to matter less for the story and more for the allocation calculations.

This made me think about a recent conversation I had with Ria Bhutoria, Director of Research at Fidelity Digital Assets, when she asked me if I was surprised by how Bitcoin is reacting to macro events this year. My response was that Bitcoin fits into so many different investment buckets, it’s almost impossible to be surprised by anything that it does. How many other assets in the world besides US Treasuries can be claimed by so many different types of investors?

The list goes on and on. This may be why Bitcoin was once compared to a platypus.
Notable Movers and Shakers
While Bitcoin produced mild gains (+50 bps) last week, Bitcoin dominance fell 1% as high beta assets reclaimed levels lost during last week’s unwind. Two separate (but notable) parts of this space - Bitcoin metrics and ‘CeDeFi’ -- were in focus last week:
What We’re Reading this Week
EU to Reveal View on Digital Currency Soon
At a conference last week in Berlin, the European Central Bank (ECB) and top officials of various Eurozone countries gathered to speak about digital currencies. The message from all of them was very similar: digital currencies should only be issued by individual countries or the ECB and not private institutions such as Facebook. The release of Facebook’s Libra digital currency last year has caused quite a stir and has forced many nations that were not considering a central bank digital currency to start researching the technology and its impact on their economies. According to Christine Lagarde, the head of the ECB, “The Eurosystem has so far not made a decision on whether to introduce a digital euro. But, like many other central banks around the world, we are exploring the benefits, risks and operational challenges of doing so.” She followed up that a plan would be released in the coming weeks.
Mastercard Launches Digital Currency Kit for Central Banks
Last week, payments giant Mastercard released the Central Bank Digital Currencies Testing Platform, a testing environment for central banks to test proposed central bank digital currencies (CBDCs) and how they react in the real world. Issuing a CBDC has many benefits to central banks such as to the Federal Reserve, which could send money directly to individuals and not have to rely on paper money or the patchy network of banks to deliver funds. There are a number of benefits for businesses too such as the ability to settle payments instantly instead of waiting for funds to wind through a network of banks and clearing houses. Mastercard’s testing platform allows central banks to see how their CBDCs would react in a controlled environment and how these proposed currencies would plug into existing payments infrastructure.
Switzerland Passes Regulatory Framework to Govern Digital Assets
Switzerland became the first financial center to pass a regulatory framework for digital assets last week. The six amendments are intended to boost blockchain and cryptocurrency activity within the country and accompanies the Blockchain App passed this summer. The laws cover the exchange of digital securities, sets standards for cryptocurrency exchanges, and addresses money laundering issues. The hope is that these laws will legitimize the industry while welcoming in new businesses. The Blockchain Act and amended laws go into effect in February 2021.
SWIFT Report: Cryptocurrencies Rarely Used to Launder Money, Fiat Preferred
An old myth around digital assets is that they are used exclusively by criminals for illegal activities such as money laundering. Last week a report from SWIFT sought to debunk this. Its findings indicate that crypto is not a preferred money laundering tool for criminals, however, traditional methods such as mules, hawala (intermediaries), front companies, cash businesses and the drug trade remain at the forefront of these operations. The report stated "identified cases of laundering through cryptocurrencies remain relatively small compared to the volumes of cash laundered through traditional methods.” However, SWIFT does believe that the use of cryptocurrencies to launder stolen bank funds will rise in the future particularly with the availability of online websites, called crypto mixers/tumblers, which obfuscate the ownership of tokens.