What happened this week in the Digital Assets markets?
Week-over-Week Price Changes (as of Sunday, 7/26/20)
Source: TradingView, CNBC, Bloomberg
Very Few Trades Are Obvious -- But Some Are
The only investor that is never wrong is Hindsight Capital.  For everyone else, investing is difficult.  That said, there are a few times each year where certain outcomes seem obvious even in the moment, and this is one of those times.
Let’s start with Treasuries.  The Fed has basically told the universe that rates are never going higher.  And while lending our government money last week for 30 years at a 1.33% yield doesn’t seem inherently attractive, I doubt anyone was shocked that a week later it yields 1.24%.
Next, the equity markets.  As we tweeted at the beginning of the week, was anyone else expecting this pattern?
We’ve seen this pattern over and over in equity markets, and the moral hazard is now so high that the stock market barely even has to blink.  What is perhaps more interesting is that more than 40% of young adults have no faith in our government, according to a recent Deloitte survey, yet the global financial markets seem to have 100% faith that our politicians and central bankers are going to solve the upcoming "fiscal cliff" problem as stimulus packages expire.
And then there are Digital Assets.  Bitcoin (BTC) and Ethereum (ETH) rose 11% and 38% last week, respectively. The two largest digital assets had both been stuck in the mud for the past few months, as smaller, more easily definable value-accruing tokens soared.  For BTC specifically, this breakout was just a matter of time, as the inflation protection / store of value thesis was working everywhere else and Bitcoin was simply playing catch-up (gold at all-time highs, silver at 8-year highs, 2s/30s Treasury curve steepening, and tech stocks flying).  Meanwhile, ETH had nowhere to go but up after all of its disciples had posted huge gains for the past 3 months (particularly in the red-hot “DeFi” space).  Call it technicals or relative value, but the ETH catch-up trade was coming eventually.  Our friends at QCP made an astute point, noting that silver gained 33% so far this month, and pushed big brother gold to new all-time highs above $1920. The parallel in digital assets has seen the previously underperforming ETH breaking out and dragging big brother BTC back to the familiar old range highs between $10k-$10.5k again.
The culmination of this past week’s price action seemed inevitable, while the timing, of course, never is.  But it’s one of those weeks where nothing that happened was entirely surprising.
The rush to DeFi, CeFi and Digital Payments - Also Not Surprising
The price of most tokens powering DeFi fell last week (-10-20%), even as total value locked (TVL) continued to soar.  Aside from price action, this race for yield is not all that surprising.  In a world starved for yield, a new mechanism is rising like a Phoenix. 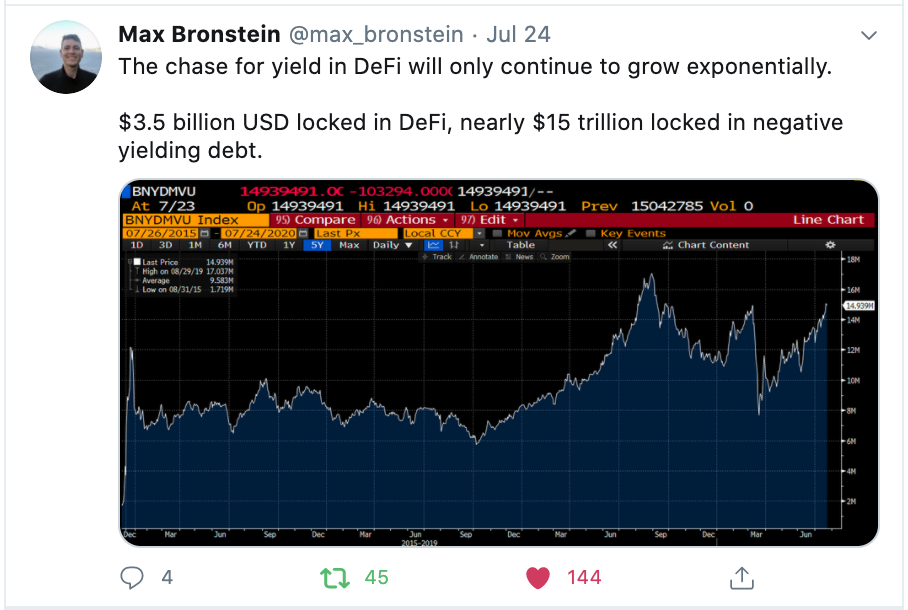 Source: Twitter / Max Bronstein
Equally unsurprising, the race to get involved in digital assets from traditional finance and tech companies is accelerating as well (read more in “What We’re Reading” section below).  Visa, Mastercard and PayPal are all increasing their commitment and exposure to digital assets, while traditional banks are likely to get involved in custody and trading following a positive ruling from the OCC. In fact, Standard Chartered already announced an offering.  “Old finance” and “new finance” are going to start to converge even further as digital asset companies hit the equity markets. The digital asset giant, Coinbase, has been rumored to be preparing for an IPO next year, as are potentially BlockFi and Digital Currency Group.  As Noelle Acheson from Coindesk pointed out over the weekend:

“The universe of listed crypto companies is still small, but that could well change in the very near future. With Ant Financial listing on the Hong Kong and Shanghai exchanges, and a rumored Coinbase listing in the offing, there could soon be high-market-cap opportunities for all types of investors. An argument can be made that this would be even better for the sector than a bitcoin ETF, as funds flowing into listed crypto companies would spread mainstream investment across a range of crypto assets and blockchain applications, rather than just bitcoin.”

All of this is positive for the continued growth and maturation of the digital asset universe, and any publicly listed stock from a digital asset company will likely perform well, given the tiny size of these offerings relative to the overall equity market. However, in a universe already fraught with investment products that don’t accurately represent the actual digital asset universe, investors should be cautious here too.  As we’ve learned throughout 2020, the pace of evolution is far surpassing the ability for any one company to truly mirror its growth.  We applaud those who are keeping pace from an educational standpoint.
Notable Movers and Shakers
Last week gave rise to intra-market bifurcation, with asset rotation flowing from hot sectors (DeFi) into dormant sectors (large caps). In fact, of the Top 100 digital assets by market cap, 50 finished the week higher, 43 finished lower, and 7 were disregarded (dollar-pegged tokens). One can debate whether this was a result of one sector having too much time in the sun or if there were larger fundamental reasons at play (incentives for liquidity mining phasing out, for the time being) - regardless, there were still notable moves based on real developments:
What We’re Reading this Week
Banks in US Can Now Offer Crypto Custody Services, Regulator Says
The most impactful news of last week was that the Office of the Comptroller of the Currency (OCC) in a public letter approved all nationally chartered banks to offer crypto custody services to clients. The letter notably states that “The OCC recognizes that, as the financial markets become increasingly technological, there will likely be increasing need for banks and other service providers to leverage new technology and innovative ways to provide traditional services on behalf of customers.” The approval is seen as a major milestone for the digital assets industry since, to date, only a handful of specialized firms offer custody of digital assets, most of them crypto-native businesses.
Beijing Government Releases its Blueprint for Becoming a Blockchain Hub
Last week, Beijing released a 145-page document outlining how the city would develop itself into a blockchain hub over the next two years. The release of this blueprint comes on the heels of an announcement last month that the city aimed to become one of the first cities in the country to integrate blockchain technology into the city’s economic development. The plan seems incredibly ambitious with Beijing planning to become a blockchain hub by 2022. However, local media reported that 140 government services already use some form of blockchain for services such as data sharing and electronic certifications.
Visa, Mastercard And PayPal Are Changing Their Tune On Bitcoin And Crypto
The three payments giants appear to each be making forays into the digital assets space, albeit at their own pace. After last week’s confirmation that PayPal was making inroads to offer cryptocurrency trading to its customers, Mastercard and Visa have also stepped forward with their plans to work within the space. First, Mastercard announced it was extending its cryptocurrency programs and making it easier for companies to issue cryptocurrency cards on its network. Then, Visa released a blog titled “Advancing our approach to digital currency” in which the company discussed the importance of crypto in extending digital payments. It cited its partnerships with existing crypto businesses such as Coinbase, its investment in Anchorage and its work with policymakers on a central bank digital currency.
Not Braking and Breaking
Last week, SEC Commissioner, Hester Peirce, gave a speech at Singapore Blockchain where she stated that she disagreed with the recent enforcement action in the Telegram ICO case. Dubbed “crypto mom” for her digital asset friendly stance, this is not Peirce’s first public dissent. In her speech she explained how she believed the court had not been able to interpret the use of cryptocurrencies and had wrongfully applied the Howey test in the case. The speech went on to discuss decentralized autonomous organizations (DAOs) and the importance of not stimming innovation from the digital assets space.