"That’s Our Two Satoshis"  — The Investable Landscape is Growing, Investable Products are Not

Written by Jeff Dorman, CFA
Jul 6, 2020
What happened this week in the Digital Assets markets?
Week-over-Week Price Changes (as of Sunday, 7/5/20)
Source: TradingView, CNBC, Bloomberg
No One Understands the Stock Market
Congratulations to everyone who slept through the first half of the year, and woke up on the 4th of July to the Nasdaq at all-time highs, and the S&P 500 down a modest 3% YTD.   US equities continued to gain last week, shrugging off bad COVID-19 data, rising corporate bankruptcies, and continued social unrest and instead focused on large (and predictable) month-over-month gains in economic data. We’re essentially in a solvency driven market right now.  If a company is solvent, its stock will trade at a ridiculously high multiple.  If a company is insolvent, intrinsic value kicks in, which is so far below market trading levels that it is patently absurd that some investors still defend debt and equity levels by citing its “intrinsic value”.
But since most companies remain solvent, for now, thanks in part to the generous fiscal and monetary stimulus packages, it was not entirely surprising that U.S. stocks wrapped up their best quarter in more than 20 years last week.  The gains in the 2nd quarter were not due to fundamental strength from companies, but rather due to a lack of new negative news, which we discussed back in April.

“1Q earnings won't matter much since most of 1Q was pre-quarantine, and the outlook for 2Q doesn't matter much either since everyone knows it will be horrific and are now expecting the worst. We may have to wait until we get forward guidance from companies for the 2nd half of the year (which won’t be given until AFTER 2Q earnings), before we get new and relevant information, since that is when the divergent options start.  Some think we will see a fast V-shaped recovery in the 2nd half, others don't.  What companies say about 3Q and 4Q outlook will likely drive markets for the remainder of the year, which means the next significant catalyst is not until July. That's a long time from now in trading terms.”

Well, July is here, so buckle up, because the unknown is now upon us.  A recent Bloomberg survey demonstrated just how clueless everyone is right now. “Every option from ‘really bad’ (down +10% from here) to ‘really good’ (+10%) got basically the same number of votes, and we’re only talking about [expectations for] the next six months.” 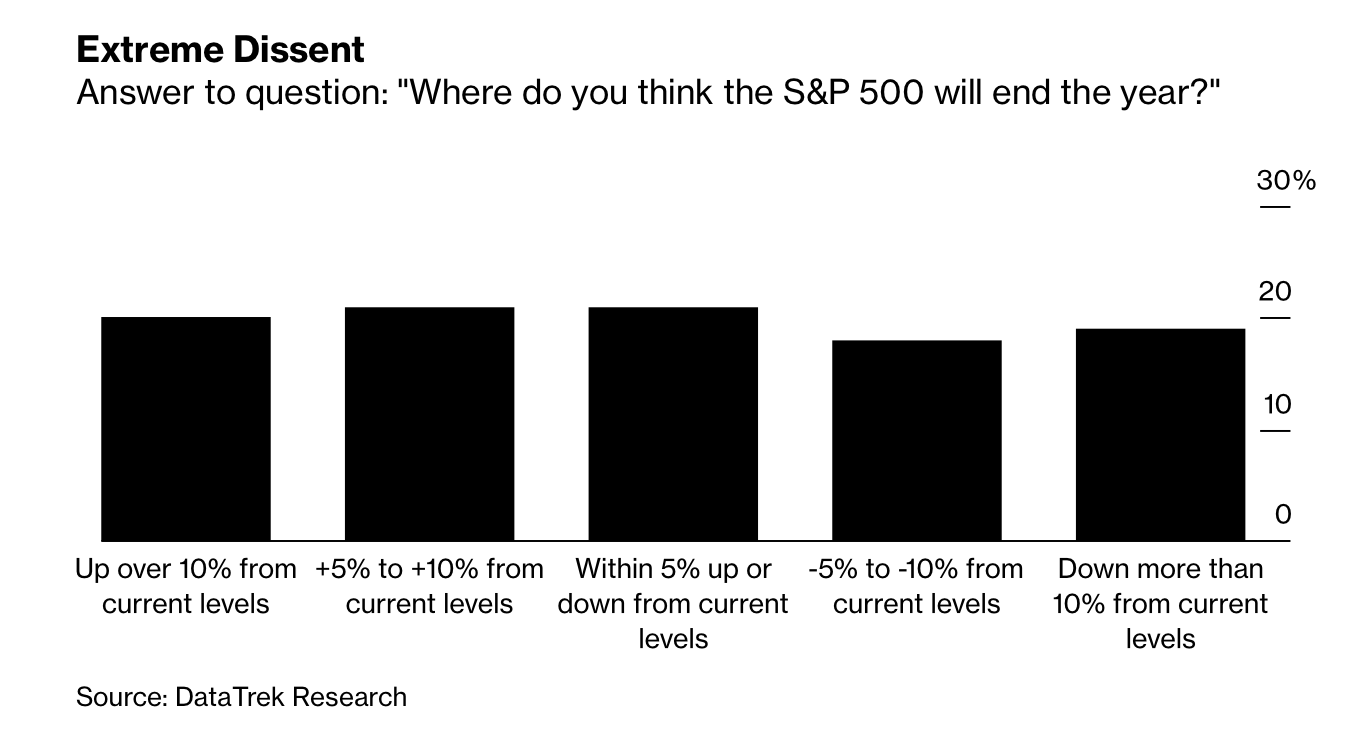 Source: Bloomberg
Digital Asset Prices are Flying, but You Wouldn’t Know it
Equities aren’t the only asset class that is flying.  Digital assets are on a tear too, with many tokens gaining 50-1,000% since the lows in March, mostly issued by companies that are beginning to achieve real product market fit.  Unfortunately, you’d have no idea this is happening by just looking at the most well-known “crypto benchmarks” or listening to the loudest and most “CNBC-facing” industry evangelists, most of whom just speak about Bitcoin and a few picks and shovels service providers.
Bitcoin (BTC) gained 42% in the 2Q, and is now up a very respectable 26% YTD.  Most digital asset indexes have returned something similar.   Despite reckless monetary and fiscal stimulus, the Bitcoin halving, and all-time highs in gold, Bitcoin has not been the main digital asset story of 2020.  In fact, the biggest stories have not come from “cryptocurrencies” or legacy protocols or platforms, but rather from the growth of small cap digital assets, which are most often in the “pass through securities” bucket of this evolving asset class, or belong to a specific theme or category (like “DeFi” currently).
Every investor gets some things wrong; that is to be expected.  But there is nothing worse than when you get the investment idea right, but express that view incorrectly.  And that is happening more often than not in digital assets because the investable products available to most investors no longer accurately reflect the industry.
Assuming you aren’t researching and trading new tokens and coins by yourself every day, the investable universe in digital assets looks something like this, and it’s quite bleak:

While it's exciting to have multiple options, with the exception of certain actively managed funds, the returns of these other 4 options have been suboptimal for the past few years.  Worse, these options simply do not include what we believe are the most interesting, valuable and fastest growing components of this evolving digital assets ecosystem.   Let’s review:

Source: Bitwise, Bloomberg, Messari
The bottom line is that institutional investors have been doing exactly what they should be doing for the past few years.  They are reading, researching, and talking to industry professionals to educate themselves on how best to gain exposure to digital assets.  While many of these investors are still deciding whether or not to allocate to digital assets, that decision by itself is no longer enough.  How you invest is just as important.

While it may have once been acceptable to say “I just want exposure”, it is now imperative that you focus on how to get the correct exposure.  This space evolves fast, and the investment vehicles need to evolve too.
Notable Movers and Shakers
Yet another week of Bitcoin stagnation has left many impatient, with volatility (BVOL, 27.6) continuing to plummet from the April highs (170). However, there was movement in the digital asset space (BTC.D -1%), with opportunities abound:
What We’re Reading this Week
BHP Completes First Blockchain Iron Ore Trade with China's Baosteel
Last week, BHP group announced it had completed a blockchain iron ore trade worth $14mm with China’s Baosteel on the MineHub platform. Commodities groups have long explored blockchain solutions as a way to digitize the very paper heavy process of trading. The trial trade took this entire process online with the platform processing contract terms, exchanging digital documents and providing real-time cargo visibility. According to MineHub, the current pandemic along with fraud have furthered the adoption of digital solutions for commodities trading.
Swiss Government Lowers Legal Barriers for Crypto Businesses
Last week, Switzerland’s governing body passed a package changing a number of financial laws including those that impose legal barriers to entry for applications of blockchain and distributed ledger technology. The new laws address the transfer of tokens among parties and how they are treated, making ownership rights and access easier. Along with Switzerland’s favorable crypto tax laws, which will also not see changes, the country is making it clear that it is open to crypto businesses and startups within its borders.
SBI Holdings Invests in B2C2
The race for crypto prime brokerage continued last week with Japanese investing giant SBI Global putting $30m into digital asset market maker B2C2 with the intent of growing the firm’s crypto prime brokerage services. This comes on the heels of announcements from Coinbase, BitGo and Genesis of their intention to begin offering such services. B2C2 plans to roll out a new service later this month that includes automated financing and execution. As one of the oldest market making firms in digital assets, B2C2 is best known for working with larger investors to work OTC trades and now counts SBI among its clients. The investment from SBI signifies the importance of creating prime brokerage services within crypto as it potentially opens up the asset class to more traditional institutional investors.
Digital Dollar Would Give Fed Too Much Power
According to testimony from the American Bankers Association (ABA), a digital dollar issued by the Federal Reserve would give the Fed too much power. The ABA, a consortium of private banks, stated in their testimony that a digital dollar would cause the Fed to become “politicized as the central control point for monitoring and potentially denying transactions” and in addition would threaten the retail banking model. Despite these arguments, most testimonies before the Senate last week were in favor of issuing a digital dollar as it could reduce costs associated with activities such as distributing stimulus checks. The topic of creating a digital dollar is still up for debate and now in the hands of Congress to decide.