"That’s Our Two Satoshis"  — Sell in May and Go A... Way into Bitcoin Digital Assets

Sell in May and Go A… Way Into Bitcoin

Digital asset prices rose 10-15% last week, with both Bitcoin and Ethereum both rising 11% and now sitting +36% and +63% year-to-date, respectively.  Meanwhile, equities broadly declined, pushing into negative territory month-to-date, while gold jumped almost 3% to new year-to-date highs.  The recently overhyped short-term positive correlation between Bitcoin and equities has once again broken down and has resumed its historical uncorrelated and untethered market dynamic.
90-day Correlation between the S&P500 and BTC is falling

The stark out-performance by Bitcoin digital assets YTD may surprise some investors, especially over the past month. In fact, over the last three weeks, we wrote that this was one of the most hated Bitcoin rallies, and that the much anticipated Bitcoin halving wouldn’t have any immediate market impact.  Yet despite the naysayers, the strength of this digital asset rally has been driven by so many factors that it’s hard to keep recapping them each week.   Day-to-day and week-to-week, there are of course numerous factors affecting prices, but when you take a step back, it’s really hard to ignore all of the positive factors.  In fact, I just stumbled upon an interview I did in April 2019 about “what keeps me up at night regarding Bitcoin”... and it’s almost scary how unfortunately accurate this prediction was:

"...my biggest fear is that those of us who see the potential of digital assets end up being too right. Inflation, unsustainable government and private debt levels, fractional banking, and global trade wars are all very good reasons to own digital assets in your portfolio, at a minimum as a hedge to complete fiat collapse. And even though I want to be right, I don't really want to be right at the expense of a complete collapse of the banking system. But this is unfortunately in play, especially now that modern monetary theory (“MMT”) is creeping into the narrative. While digital assets may seem like a toy right now, they may become the only asset of value left."

Back to the halving, the historic event occurred a week-ago Monday, and it came and went without much fanfare.  It was similar to Y2K, in that there was a lot of preparation for what ultimately did not matter much in the moment.  But it will never be forgotten.  Recall, the first block ever mined contained the message "The Times 03/Jan/2009 Chancellor on brink of second bailout for banks."   In the final block mined before the block production rate halved, the mining pool slipped in a not-so-subtle reminder of why Bitcoin exists, and why we believe it will continue to thrive. 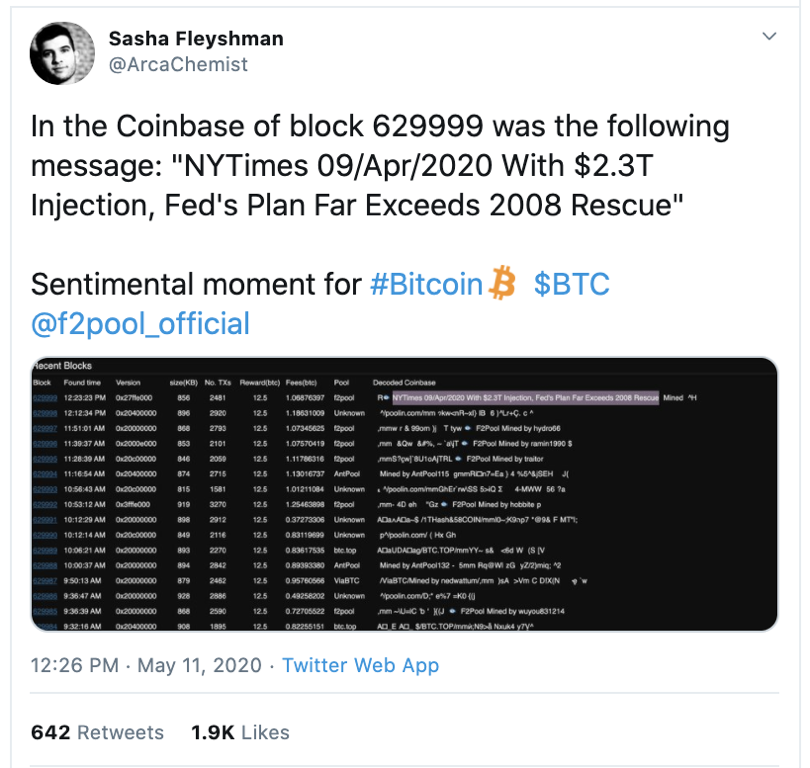 The CME is Growing Fast

Paul Tudor Jones’ announcement shocked the investing world, led to a flurry of media attention, and will likely be a tipping point for institutional investor adoption of digital assets.  While the headline itself will fade over the next few weeks, there are a lot of private channel checks that corroborate this growth, leading us to believe that this is not a flash in the pan.  While it’s hard to track and measure the record client and backlog growth at Fidelity Digital Assets, Coinbase, Cumberland, B2C2, Galaxy and other institutional OTC dealers (not to mention our own inbound lead funnel at Arca), it’s much easier to measure the growth at the CME.  This may be the best indication of actual institutional buying, especially from those that are trying to move quickly.
3-month volume growth of Bitcoin Futures and Options Trading at the CME
Source: Skew
Some will incorrectly try to argue that buying Futures contracts is not the same as buying Bitcoin, but that is increasingly no longer the case.  As our friends at Galaxy Digital pointed out to us, the CME offers a little known "Exchange for Physical" option, which is a bilateral agreement between counterparties that allows you to settle your long position with actual Bitcoin.  This data can be tracked on CME's volume table (EFP column), and as of last expiry in April, the data showed that some institutions are now using the CME as a backdoor way to acquire, own and hold Bitcoin directly.  This may or may not be the path that Tudor Jones took, but it does allow traditional hedge funds to quickly acquire Bitcoin via a counterparty that they already likely trade with (the CME), without having to onboard at a new digital asset specialist.
Screenshot from CME Bitcoin Volume monitor ahead of April 2020 expiry

Source: CME
We’ll be monitoring this closely at next expiry (week ending May 29th).

Although we have focused on Bitcoin in recent weeks given the macro environment, the growth in digital assets has not been exclusive to Bitcoin.  Similarly, the declines in US equities haven’t been uniform either.
The market depth shows the decline in equity prices by debt rating reveals just how hard it is for overleveraged companies in this environment.  Similarly, smaller companies without strong balance sheets or diversified business lines have suffered disproportionately as well.
Small-cap stocks have taken the brunt of the selloff

Source: Delphi Digital (paywall)
Moreover, bank stocks have suffered as lower rates eat into net interest margin, and many financial stocks are still sitting at, or near, YTD lows. 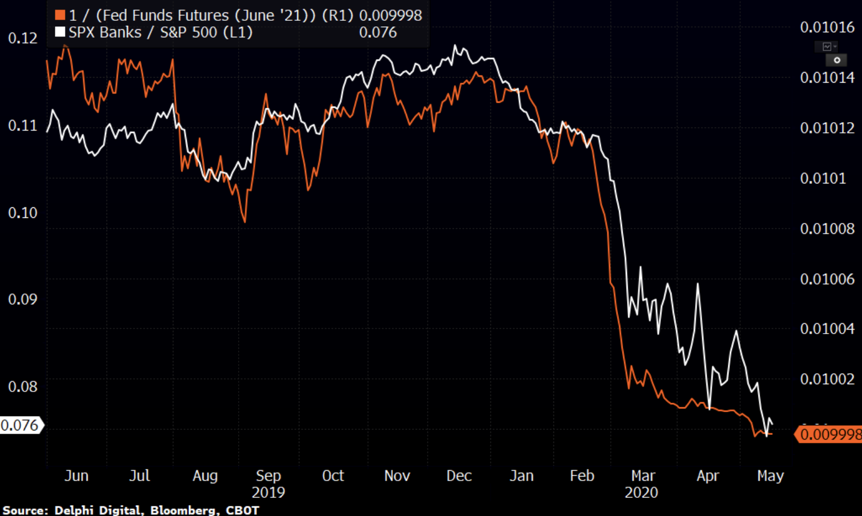 Source: Delphi Digital (paywall)
As Howard Lindzon said, “People say markets can’t move higher without the financials (banks) but maybe the new ‘banks’ are what matter more.”
He may be onto something.  Below are the market caps of new finance companies compared to old finance.

Maybe banks make the old economy worse, and FinTech (including digital assets) makes it better?
Notable Movers and Shakers
All eyes were on Bitcoin (welcome to the Fourth Epoch), but numerous projects took advantage of the increased ‘eye traffic’ on the Digital Asset space - upgrades were pushed, partnerships announced, products rolled out, and much more. Bitcoin did in fact continue to soak up market share (BTC.D +50bps), but there were some significant outliers that caught our attention:
What We’re Reading this Week
JP Morgan Extends Banking Services to Crypto Exchanges
Last week JP Morgan announced it had begun supporting two crypto exchanges, Coinbase and Gemini, after both exchanges underwent a long internal approval process. The bank is primarily offering the exchanges cash management services, accepting transfers and withdrawals of dollar-based transactions from customers and is not currently handling any of the cryptocurrency transactions. The move is seen as an important step for Wall Street, which for many years refused to service such businesses. With institutional investors such as Paul Tudor Jones validating investments in the space, banks like JP Morgan could potentially lose business in the long-term if they refuse such customers going forward.
Report Finds Hedge Funds’ Assets Under Management Doubled in 2019
According to a report by PwC and Elwood Asset Management, the AUM of crypto hedge funds doubled in 2019 to $2bn, a sign that additional regulatory clarity is leading to increased institutionalization of the digital assets space. The study also found that Quant fund strategies make up almost half of the funds, with the remainder consisting of discretionary long-only, discretionary long-short, and multi-strategy funds. Discretionary long-only funds had the best median and average performance of 40% and 42% respectively. PwC’s global crypto leader, Henri Arslanian, concluded the study with “I expect the crypto hedge fund industry to grow significantly over the coming years as investing in a crypto fund may be the easiest and most familiar entry point for many institutional investors looking at entering this space.”
Reddit is About to Get a Token...or Two
Last week online forum Reddit announced it was launching two tokens on Ethereum to act as Community Points. Community Points are designed so users can “own” a piece of their favorite Reddit communities, offering access to premium features with plans to eventually roll out a weighted voting system. As a decentralized community, the introduction of these tokens fits with the demographic using Reddit and its ethos. The hope is that introducing the concept of tokens and wallets to this online community will act as an on-ramp and gateway to the broader crypto ecoystem.
Lolli Raises $3m Seed Round from Ashton Kutcher and Michelle Phan
E-Commerce startup Lolli announced last week it raised a $3m seed round from Ashton Kutcher’s Sound Ventures and YouTube beauty blogger Michelle Phan. Lolli, which rewards users in Bitcoin for shopping at certain online retailers, also saw investor participation from Peter Thiel’s Founders Fund, Bain Capital Ventures, Craft Ventures and Digital Currency Group. With the massive increase in online shopping in the last few months, Lolli is poised to benefit as it partners with online retailers to drive traffic and earn affiliate fees through sales.