What happened this week in the Crypto markets?
Week-over-Week Price Changes (as of Sunday, 5/24/20)
Source: TradingView, CNBC, Bloomberg
What’s Driving the Digital Assets Market?
One of the hardest aspects of trading and investing in a new asset class is the lack of historical, and thus predictable, data.   Even the smartest quant trading firms and algos don’t know which factors to focus on consistently.  There have been times when digital assets have led other risk assets (last month), and times when other risk assets have led digital assets.  Sometimes Bitcoin dominates the direction and magnitude of other digital assets, and other times (like last week) Bitcoin significantly decouples from other assets.  Given their global presence, at times Asian equity and currency markets drive digital assets, and other times the US dominates the flows (currently).  Historically, US economic data and Fed policy have had no impact on digital assets, yet many young digital asset investors just started focusing on weekly jobless claims numbers every Thursday as if this data point just started being released in 2020.  And since this asset class is so small, oftentimes retail flows have a massive influence on price during momentum trades (like last week), while just one or two institutional investors can dwarf everything else just by entering the scene (Paul Tudor Jones earlier this month).
Of course, this is also why there is so much opportunity and alpha relative to other mature and saturated asset classes.  Very few active managers outperform passive indexes in equity and debt markets, yet the opposite is often true in digital assets.  This is partially because market-weighted and other rules-based passive indexes can’t accurately reflect such a fast-changing and growing asset class, partially due to active managers taking advantage of high levels of volatility, and also partially due to how quickly narratives of relevance change.  These shifting narratives are hard to keep up with.
In just this past week alone, we revisited several themes that have historically had a big impact on digital asset prices, but may or may not be influencing price currently:

Bitcoin Implied and Realized Volatility Dropped Last Week
Source: Skew
This randomness is common for “an uncorrelated asset class”.  But as Arca’s own David Nage recently said, “Uncorrelated is great, but untethered is even better.  And as I see it, digital assets are completely untethered to anything going on in traditional finance.”
Bitcoin, Debt, Inflation and Goldman Sachs
It sure seems like a lot of people are talking about Bitcoin, Gold and inflation lately considering the warning flags about money printing and inflation have been flying for decades, to no avail.  But maybe that’s precisely why everyone should be listening right now.
Dan Tapiero, from DTAP Capital,  tweeted this weekend, “Great chart of world monetary/fiscal stimulus enacted. All adds up to $20 Trillion. The total amount to be injected in just 2 MONTHS is equivalent to [the] entire nominal GDP of the US economy. And the dollar is still not falling and real US rates are still not dropping.  Policy will go easier. +Gold/Btc”. 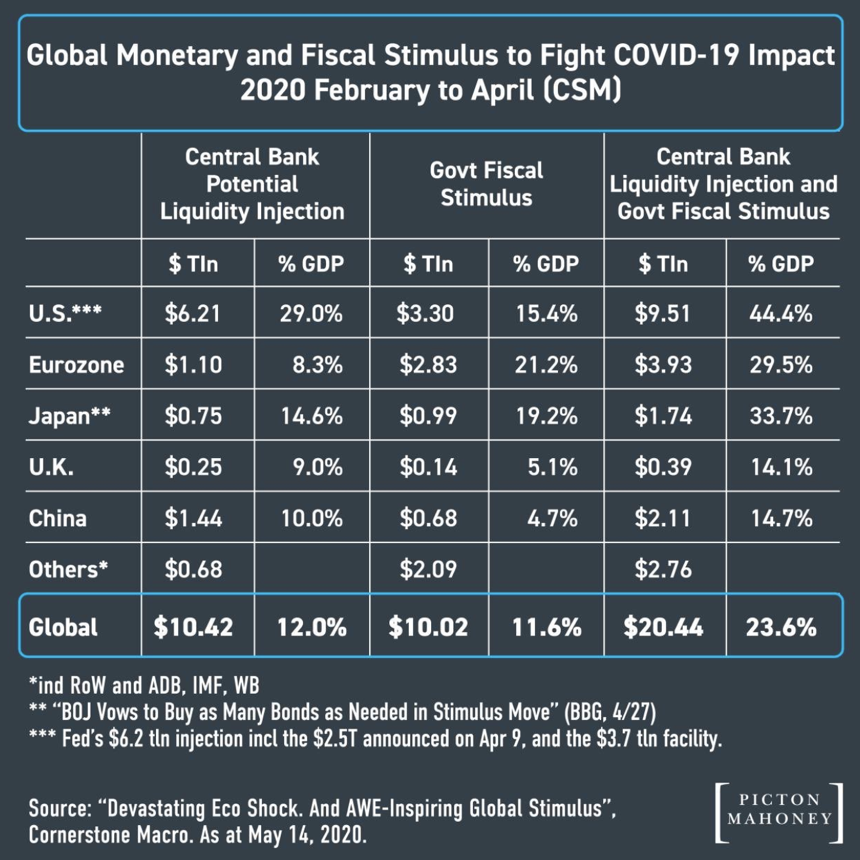 Chris Giles, economics editors of the Financial Times, pointed to something similar. In one month, the record-setting government borrowing has pushed government debt as a share of national income to its highest level since 1963.
Source:  SIFR Data
So naturally, this barrage of government stimulus has led many hedge funds to implement the same playbook they’ve been using for the last 13 years…. buying gold.  This is an expected reaction, and likely a profitable investment strategy.  Given the many different ways with which investors can gain access to gold, it’s not surprising that Wall Street banks and broker-dealers are piling on.  What is surprising though is that these same banks and brokerages are now starting to include Bitcoin in these conversations, even though it is more difficult for the banks to profit off of these recommendations.  This week we have yet another data point as Goldman Sachs is hosting a client call specifically to talk about both Gold and Bitcoin as it relates to inflation.
We are encouraged by this, but also expect it to create a polarizing reaction, as many investors have and will continue to ignore inflation, especially since deflation may actually occur first.  Perhaps the best take on both deflation and inflation came from Blockworks Group:

“We have created a dangerous false narrative here.  Forty years of warnings about the impact of money printing on inflation have forged a permanent, opposing association between the two concepts. The thinking goes, as long as there is no inflation, we are free to print as much money as we want! Why not? The big negative consequence that we’ve all been warned about for years has not happened. The conclusion will be, once again, that we have somehow mysteriously conquered inflation. And we’ll continue to print because we aren’t seeing inflation, and that will just continue to exacerbate income inequality. The irony of all of this is that we have not, of course, magically solved inflation. Inflation, like risk, is impossible to eliminate. It is an economic force of nature, no more capable of being conquered than gravity.”

Let the inflation flags continue to fly… for as we know, risk can change quickly.

Source: Twitter
The Next Wave of Digital Assets
For obvious reasons, we’ve focused a lot on Bitcoin the past few months.  But an entire ecosystem of interesting and unique digital assets lies beneath the surface.  Notice we did not say “cryptocurrencies”, as most of these digital assets do not have any characteristics similar to currencies.  Instead, much like the broad category “fixed income”, where bonds have different coupons, different maturities, different covenants and different features (callable, putable, convertible, warrants, etc.) -- most digital assets have very unique features as well, making analysis of each uniquely structured token different from the last.
A few weeks ago, we publicly challenged investment bankers to start thinking more creatively.  Investment bankers continue to advise companies to jam expensive debt and equity offerings down pension funds’ throats and are missing out on helping these same companies issue non-dilutive capital to an insatiable retail bid, while simultaneously helping to grow their networks and communities.
While the biggest companies aren’t ready, we’ve seen glimpses of where we believe tokenized capital is headed.  Spencer Dinwiddie of the Brooklyn Nets continues to market first-of-a-kind Professional Athlete Investment Tokens (PAiNTs), and while the timing has been extended, it is still coming to market.  And just last week, we saw more evidence:
We applaud the innovation.  While some of these opportunities are more investable than others, the trend will mostly continue. And one day soon, you’ll likely be reading a prospectus for Starbucks tokens underwritten by Goldman Sachs.
Notable Movers and Shakers
As stated above, this week was certainly a rare sighting in the digital assets market - Bitcoin finished the week down 10%, with Bitcoin dominance down 2.5%. While alternative assets performed well compared to Bitcoin across the board, there were some that refused to go unnoticed:
What We’re Reading this Week
The Crypto Price-Innovation Cycle
Venture Capital firm Andreessen Horowitz released this post last week covering the price cycles prevalent in digital assets and how they contribute to the birth of new projects at every dip. The cycle, which has already occurred three times now, has roughly five stages: 1) rise in prices of digital assets; 2) increased interest in the space; 3) generation of new ideas and projects; and 4) launch of startups and projects. These cycles are in fact supported by data, which a16z collected from sources such as Reddit, Github and Pitchbook. They conclude that although the digital assets space is chaotic and volatile at times, these cycles do exist and have led to long-term ecosystem growth.
Genesis Trading Acquires Custodian Vo1t
Last week, Genesis Trading, a subsidiary of Digital Currency Group, announced it had acquired digital asset custodian Vo1t, in a bid to expand its business to offer full prime brokerage services. Prime brokerage services in digital assets are a key piece of infrastructure currently absent in the ecosystem and sorely needed. The acquisition will allow Genesis to establish a London office along with a Singapore office which they plan to open after registering with the Monetary Authority of Singapore.
Central Bank Survey Indicates Digital Currency Interest
The publication Central Banking found that of the 46 central banks sampled, 65% of respondents noted they are actively researching digital currencies and considering creating a Central Bank Digital Currency (CBDC). However, all but one of the respondents stated they are leaning towards the use of a Distributed Ledger Technology (DLT) versus a pure blockchain platform. A majority of the central banks currently have no plans to move forward with issuing a CBDC, showing that despite the research and efforts put forward by these countries, the technology is still out of their comfort zones.
Shopify Dips into Digital Assets
E-commerce giant Shopify has partnered with crypto payments processor CoinPayments to allow merchants to accept crypto as a form of payment. The integration will allow merchants that use Shopify’s online platform to accept over 1,800 cryptocurrencies as a form of payment while also getting paid faster with less cross-border friction. In addition, Shopify recently joined the Libra Association, Facebook’s digital currency consortium, indicating the company’s intention to pave the way for widespread usage of digital currencies for e-commerce and payments.